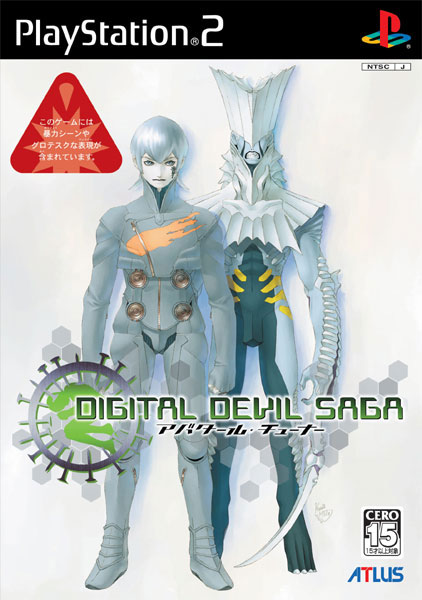 Rend, slaughter, devour your enemies. There is no other way to survive. You cannot escape your hunger, Warriors of Purgatory.

Somewhere there exists a place called the Junkyard, a place of eternal rain where six rival tribes battle to reach Nirvana. Such has it been for all memory. For as long as Serph and his tribe, the Embryon, can remember, the Karma Temple has ruled over the Junkyard, prescribing law for the inhabitants of this plane. One day, during a battle between Serph’s faction and the Vanguards, a mysterious object appears in the field. The object opens… and chaos ensues. Afterward, the Embryon find themselves on a bloodied field, the object blown open, and in the center lies a young, black-haired girl. One without a Tag Ring, the only type of identification in the Junkyard…

DDS stands next to Shin Megami Tensei: Nocturne as one of the few RPGs this generation that actually delivers a story targeted towards the adult gamer. With a plot that revolves around a concept that actually makes players think, and portions of the story that are downright disturbing, Digital Devil Saga finds itself in the unique position of being an adult RPG that is downright accessible to the casual gamer. Characters in Digital Devil Saga are able to change into demons… and devour them to achieve power. Needless to say, this is not the kind of game you want to play while Little Jimmy is in the room. Unlike Xenosaga: Episodes I and II, however, players won’t be destined to wonder about the rest of the series’ plot for years, as Digital Devil Saga 2 is set for release this August.

Characters become fairly well developed, as they evolve from those who have not known love, joy, or hate, to beings with feelings and emotional thought. Character models look great, although some may be disappointed by the re-use of many of the random demon models from Shin Megami Tensei: Nocturne. Story sequences are fully voiced and more than suffice to flesh out the plot. Digital Devil Saga does use the ‘silent protagonist’ vehicle, similar to Crono in Chrono Trigger. Serph still makes decisions based on the user’s input, but his lines are implied, not spoken.

Despite the fact that Serph cannot find his own voice, the rest of the cast finds themselves fully spoken for during story sequences. The majority of the voices in DDS are simply superb. Characters come off as believable the majority of the time, and all have voices that seem to groove with their personalities. Despite Cielo’s Jamaican-accented voice, the rest of the cast meshes well with the story and game’s environment.

On the other end of the audio spectrum, DDS’s music stands out as much as those in Shin Megami Tensei: Nocturne. With rock-based tunes by Shoji Meguro, Digital Devil Saga’s main theme in the US version is “Danger,” by the band Etro Anime. Although many purist fans of the Japanese version decried the replacement of “Pray” as the theme, Etro Anime’s song fits very well in the scheme of things, and “Pray” finds itself popping up throughout the game.

Visually, Digital Devil Saga is absolutely stunning, during both standard story sequences and full motion video. Characters exist with a shading style somewhat similar to cel-shading. Those who have played Shin Megami Tensei: Nocturne will notice the immediate resemblance, as the games share the same graphics engine. Environments are well differentiated, even in this bleak world. The Junkyard may be a place without much color, but environments and character models do not suffer by this lack. The initial FMVs are, at the least, simply brilliant. Although they may paint a different picture to the average gamer, the game is through-and-through a classically styled console RPG. FMVs come across throughout the game, but there are still many story sequences that use the in-game engine. These sequences, although not as gorgeous as the FMV, still manage to look good due to the animation style, even with the lack of polys in comparison to the characters in Final Fantasy X. Characters animate well outside of battle, although with auto-battle left on, animation is eliminated for speed of battle.

The majority of Digital Devil Saga takes place in the field, as the game, at its base, is a dungeon crawler. Despite the strong story, at least two thirds of the game will be spent in dungeons or in battle. Dungeons are well designed and, although they are long, there are plenty of save points across every dungeon, so there’s never much loss due to death, which is pretty often, due to the game’s higher-than-average difficulty.

DDS uses the Press Turn system seen initially in Nocturne. In short, players are given a number of turns based on the number of characters that are alive at the time. When a player uses an attack that an enemy is neither weak nor strong against, a single press turn is consumed. An attack that the enemy is weak to will only consume half of a press turn, and additionally, the other half can be used for a standard attack. On the occasion that an enemy resists an attack, two turns are taken. On the off chance that the player uses an attack that the enemy reflects or absorbs the attack, all remaining press turns are removed. This same system affects the enemies as well, so it can be extremely useful to learn absorption abilities.

Combo attacks are the new addition to the Press Turn system for Digital Devil Saga. Characters can combine their magic and guns to create combination attacks, ala Chrono Trigger. Characters can also withdraw from a battle so other characters can enter battle, but this comes at the price of precious Press Turns. Characters can also purchase ammo, which they can use in their human forms. Ammo is generally useless, as players are unable to use magic-based combo attacks or magic in their human form. Because of this system, Digital Devil Saga does not allow players to play stupid. If you just mash on the attack button, Serph and friends will end up dead in their shoes.

The only control-based issue in the game comes with the fact that auto-battle is set to triangle. Having used this button as ‘cancel’ in many games, I’ve lost many a battle by pressing triangle during a boss fight and seeing my characters run off an attack wordlessly.

Digital Devil Saga employs an experience system that’s an amalgam of many previous games. Characters gain Karma (Experience) and Atma Points (AP) after battle. Characters gain more statistics and hit points upon level up through experience, like most other RPGs. AP is gained in two ways. If an enemy is simply defeated, all characters, both active and inactive, gain a small bit of AP, which is put toward the Mantra that’s currently being learned. If an enemy uses a ‘hunt’ skill to defeat an enemy, they gain a larger amount of AP. To learn these skills, players need to purchase Mantra beforehand, from a save point. These Mantra increase in price between tiers, but it may be best to have characters learn across relatively few lines. Players come across items called Cells in their travel. By selling these to the shops in control of the Karma Temple, players both gain cash and more items can be purchased from the shops.

Although it initially seems a bit intimidating, the system becomes second nature after two hours or so. Digital Devil Saga is a bit of everything; dungeon crawling, a unique battle system, and an intriguing story all find themselves wrapped up in the game. Atlus has released a superb, if somewhat incomplete (storywise) title. With some extras that every RPG fan will love, such as the box for the set and the soundtrack, Digital Devil Saga comes in as one of the most impressive RPGs on the PlayStation 2.