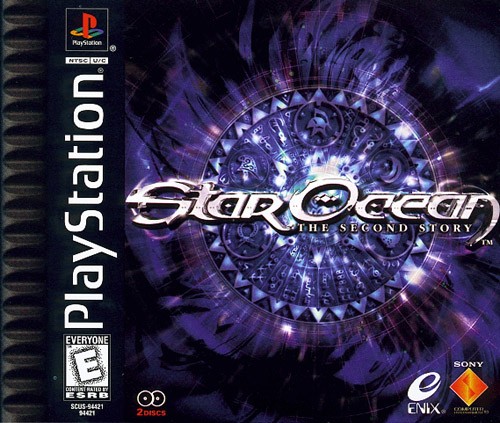 Star Ocean was one of the last RPGs to be released on the SNES and was another of the many Japanese RPGs not translated for the US audience. However, video game publisher Enix was looking for a way to get their foot back in the door of the US RPG market after a considerable absence, and Star Ocean: The Second Story (hereafter referred to as SO2) served that purpose. The tri-Ace-developed RPG was released to a fair amount of fanfare and was generally well received. Despite some definite flaws, a unique item creation system and an entertaining battle system make SO2 great fun to play.

“You think you can win over the Hero of Light?”

The plot centers around two heroes – Claude Kenni, a member of the Earth Federation, and Rena Lanford, a native of the planet Expel. At the beginning of the game, an accident transports Claude to the planet Expel, where he is treated as a legendary hero. From there, Claude and Rena set off on a journey to discover the secret behind the appearance of a strange meteor-like object, the Sorcery Globe. As the game progresses, the duo will encounter a varied cast of characters and go to places far beyond where they expected.

The game can be played as either Claude or Rena – while the overall quest stays the same, there are a few changes here and there depending on who you play, and you’ll also gain more information about that character. Other than a few minor details, the only real difference between the two is with respect to two characters that can join the party.

The game has a total of 12 characters, and 8 can be acquired in your party in total. While most are easy to obtain, a few require completion of side-quests to obtain. Moreover, certain characters are mutually exclusive, so if you obtain one, you cannot get the other. The overall diversity of party combinations is welcome, though you’ll wish that you could have certain unattainable combinations of characters.

The interactions between characters are nice, though limited. One innovation in this area is the Private Action. In most towns, the party can split up, and the hero can go through the town, alone, and find the rest of the party members and talk to them. Many special sequences are activated this way, and the compatibility between the people can be raised or lowered. The advertising boast of 87 endings is a result of these rankings – in the end, characters with high compatibility either become romantically attached or ‘best friends’. It’s a nice little addition to customize the ending.

Sadly, though, the plot overall is rather mediocre. It’s not that it’s especially bad – it’s that it’s usually pretty predictable and somewhat cliché. The sci-fi angle is rather promising, but it’s neglected, leaving the game to be, for the most part, another medieval RPG. The dialogue’s rather shallow, and most of the characters aren’t explored outside of Private Actions. The translation is good, though very dry. Also, like some RPGs, each character’s emotions are, to a degree, expressed via little thought bubbles. While not bad, they take an unusually large amount of time to appear and disappear, and dialogue boxes are not open during those times, meaning many conversations are simply a matter of reading text, waiting for bubbles, reading text, waiting, etc. It’s rather disappointing, because it slows things down.

The graphics are a mix of polygons and sprites, and are generally pretty good. The characters are animated well, and the overworld looks pretty good. Towns and dungeons look terrific and have a lot of detail. In battle, some of the attacks and spells don’t look so good, and the polygons don’t always mix well with the sprites, but overall the graphics are nothing to complain about – lots of color and detail.

There are a few FMV sequences, and while they’re not up to the quality that Square has set, they’re still pretty good. The intro is rather epic, and the few other sequences throughout look pretty good as well. The small amount of anime in the ending, though, doesn’t really seem to fit the rest of the game’s style.

“We have a full score with this!”

The music is quite good. It’s pretty good quality, and varied – few songs are repeated too often, and they all seem to fit. The town themes are cheerful, the overworld themes are majestic, and the dungeons are alternately spooky and upbeat. Of special mention are the boss themes – they’re all pretty good, and there are a lot of unique boss themes late in the game – at least 6 or 7 unique ones. It’s very good music overall.

The sound effects are also pretty good. The weapons sound like they’re supposed to, and the spells sound suitably calm (or violent).

The voice acting is in a category by itself. Fortunately. It’s not just that it’s bad, but the sheer volume of vocal ineptitude is staggering. There are over 1200 voice samples – and they remain at a consistently bad level. There’s the occasional sound effect that wasn’t translated, a great number of the sounds are muddled, and the list goes on and on. It’s a bit of a shame that you can’t turn them off, but they do provide a lot of unintentional humor to the game.

“That was a good workout.”

The battle system is one of the two main features of the game. Like in another of tri-Ace’s recent efforts (Tales of Destiny), the battles are full-fledged action. Unlike ToD, the battles are on a rather large battlefield. Most characters have Killer Moves, which are special attacks/abilities that can be assigned to the shoulder buttons and used with MP, whereas the others are spell casters. The battles are essentially giant melees, with the characters and enemies running all over the place and beating on each other. It’s a bit chaotic, with the only interruptions in the flow being spells and item usage. It’s not really a thinking man’s RPG, as it basically boils down to trying to find an effective combination of Killer Moves that doesn’t drain a character’s MP reserves. Much of the time it boils down to button mashing. If anything, many of the spells aren’t effective, and fighting characters seem to have a distinct advantage. Still, battle is great fun (even though the encounter rate is very high), and a nice change from the usual menu-based system.

The other main aspect of SO2 is the skills system. Each character can purchase certain sets of skills, including combat, item creation, and other general skills. Leveling up gives each character skill points, which can be used to increase skills. Moreover, each character has certain innate talents (such as Love of Animals, Sixth Sense, and so forth) that allow them to excel in certain areas. These skills play an important role in one of SO2’s best systems – Item Creation.

Through the various item creation skills, hundreds of items can be created from various raw materials. They range from food products (which increase HP and MP) to weapons and armor (some of the best in the game are created in this way), to books and jewelry. Not only can each person’s skills allow him or her to have a variety of item creation abilities, but certain combinations of skills between members allow more powerful skills to be used, including Reverse Side (ever wanted to forge documents? Go ahead!) and Orchestra (which drastically increases item creation success rates). While it can become very tedious trying to create items (as many times you fail, even with very high skills), the ability to create your own equipment and customize your weapons lends incredible flexibility to the game. Fortunately, the option to load the game from the menu was included, so it’s rather quick to fix a mistake you didn’t like.

Overall, SO2 is a fun game to play. Yeah, the plot’s lacking, the voice acting is horrible, and there are a variety of other small flaws that detract from the game. Still, the battles are great fun (how often do you say that about most RPGs?), the item creation system lends a lot of depth, and the overall product is hard not to like. Besides, any game with Barney the Bunny, a huge rabbit with (apparently) a glandular disorder can’t be that bad, right?