If you've never experienced Steins;Gate before, or you're new to visual novels, the vibrant characters, compelling story, and beautiful animation make this a perfect entry point. 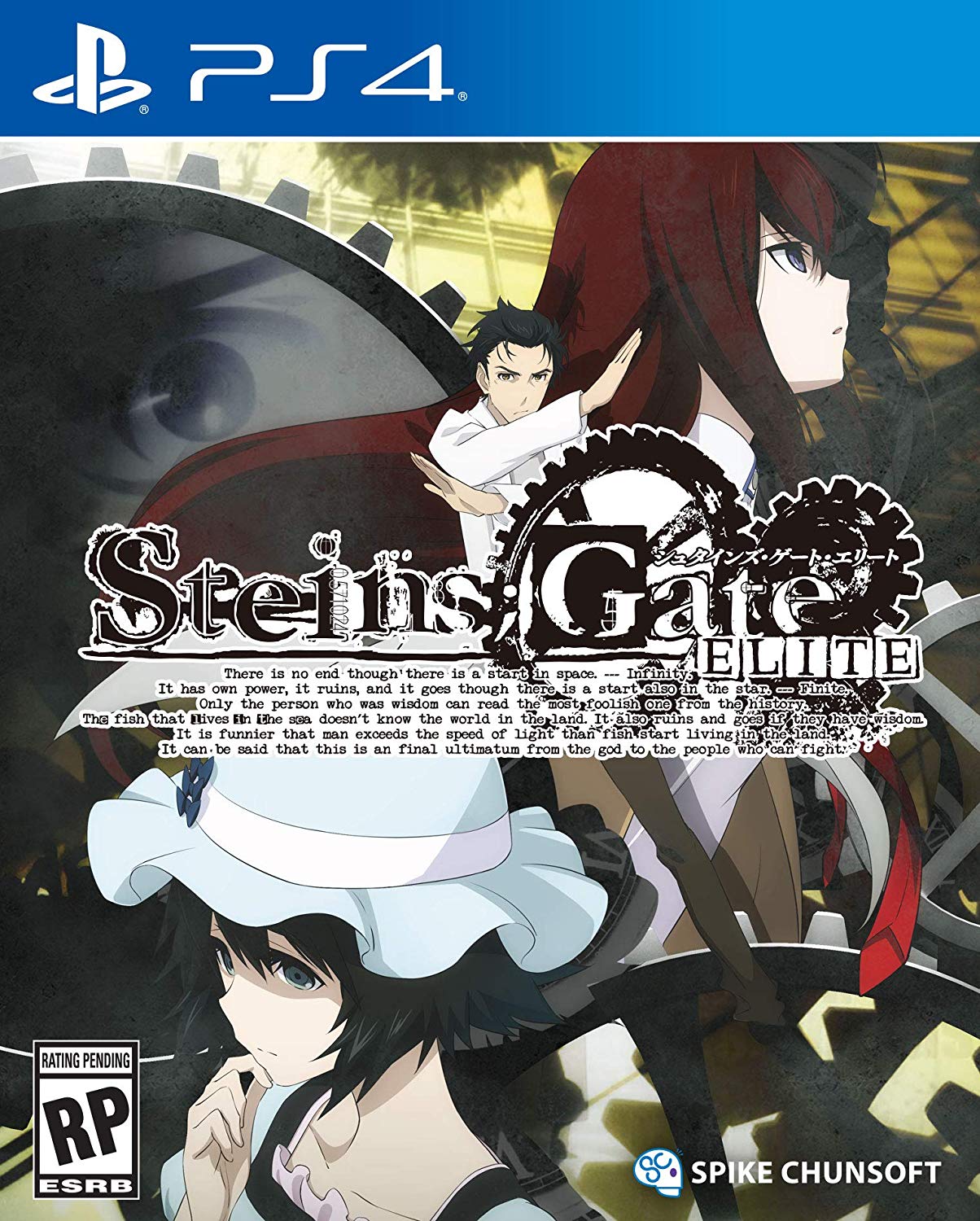 Visual novels are a tough sell sometimes. They often involve a lot of text and story, with virtually no gameplay. Some developers weave in other gameplay elements to make them more interactive: branching paths, multiple endings, point-and-click adventure elements, puzzles, and others.

Steins;Gate Elite takes a different approach. Basing its story entirely upon the original visual novel, the game is instead fully animated, using assets largely from the original anime, but also creating new ones with the same style for scenes not included in the television show. Otherwise, this is largely the same game. If you’ve played Steins;Gate, you know that’s a good thing; this is one of the finest stories told in video games, and this package is the definitive way to experience it.

The story opens in the summer of 2010 in Akihabara, Japan. College student Okabe Rintaro (you should call him Hououin Kyouma, it’s just easier), self-proclaimed, and mildly delusional, mad scientist, is attending a local lecture about time travel. He’s accompanied by his friend Mayuri Shiina, otherwise known as his captive. After the lecture, he discovers the dead body Makise Kurisu, a recently published child genius. As he leaves the scene, he sends his friend an e-mail about the incident, and suddenly he finds himself on a deserted street, he discovers the lecture was canceled and he never attended it, and Makise Kirusu is alive. It turns out Okabe and the other members of his “lab” have inadvertently created a machine that allows them to send e-mails to the past. Now, they have to decide what to do with that.

To say any more about the story of Steins;Gate Elite would do it a disservice. This is a narrative you want to know virtually nothing about going in. Simply, it’s fantastic. It involves time travel, multiple branching timelines, international conspiracies, and a whole lot of mysteries in the first half of the game that often aren’t solved until late in the second part. Admittedly, the first half of the game takes a little while to get going. The writers spend time allowing us to get to know the characters in an almost slice-of-life way while they make new discoveries about time travel. Extensive discussion of physics and different theories explaining what’s happening can seem like a slog. It’s the second half at which the story moves at a white knuckle pace, answering basically all of our questions. The twists and turns of the second half lead you to many satisfying answers, and the time spent understanding the science and the characters in the first half pays off.

The thing that grounds all the narrative acrobatics here is the characters. Each member of the main cast is interesting, three-dimensional, and goes through a satisfying character arc. Most of them are anime-culture obsessed otakus, and Steins;Gate Elite likes to play with our expectations about these types of characters. At first glance, Okabe, the main character, seems like a delusional, arrogant jerk. That’s not entirely inaccurate, but over the course of the game as you spend more time with him and his friends, we learn about the sacrifices he’s willing to endure for the people he cares about. Kurisu is often accused of being a tsundere, but she has a brilliance and loyalty that go far beyond that anime trope. Even characters who seem like villains have satisfying, and often heartbreaking, back stories. As the plot motors toward its inevitable “save the world” conclusion, we really want to save everyone because we care so much about these characters.

One element that makes the characters so vibrant is the excellent voice acting. There is no English language option, but that’s really for the better. I would have been sad to miss out on the incredible voicework the Japanese actors put in. Even though I don’t understand more than a few words of Japanese, the range of emotions each character experiences are effectively communicated at all times.

All that said, I do have one major gripe with the characters and the narrative on the whole: the way it handles gender issues. There are a lot of jokes that are homophobic and otherwise mock people who fall outside of our gender normative constructs. In particular, the conversations about a stereotypically feminine male character were off-putting. While it might be realistic for the characters to have these attitudes, the writers would have been served to have at least one person speak up about it. When I first watched the anime many years ago, it was unpleasant, but now, it’s downright inexcusable. It’s not enough to ruin the otherwise stellar narrative, but it’s incredibly frustrating.

From a gameplay perspective…well, there just isn’t much of it. The limited interaction you have involves your cell phone, and sending and receiving e-mails. Most times, when you receive an e-mail, you are given the option to respond by selecting one of the words in the initial e-mail. One nice change from the original visual novel is that you don’t have to press any additional buttons to get the e-mail to pop up. Your phone just comes out automatically. The player gets to choose to make Okabe respond to the e-mail with something relating to that word, or not to respond. It would have been nice to know exactly what Okabe would send in those e-mails, but the content of the e-mails themselves is mostly inconsequential. However, what you do with those e-mails is essential to unlocking various endings throughout the game, and eventually, the true ending. While there isn’t a flowchart, a la Virtue’s Last Reward, the game does autosave every time you receive an e-mail, which is a nice way of making sure you can go back and make all the right choices to unlock that ending you want. And it’s worth it to unlock all those endings, particularly if you’ve only watched the anime, which largely excises all of them except the true ending. They provide excellent insight into characters who aren’t fully fleshed out in the main narrative, and shouldn’t be missed.

The biggest change to this game as opposed to the original visual novel is its look: arguably a big upgrade from the original game. The animation looks fantastic; rather than watching static characters on a screen while you’re reading swaths of text, they move and interact with each other. The additional scenes that weren’t in the anime are blended seamlessly and look just like the original television show, creating a sense of immersion that has never been achieved in a visual novel. Some may be attached to the unique style of the original game, and while that look was indeed stellar, the sense of being “in” this game is worth whatever is lost in translation from the original.

The PS4, PC and the Switch versions of this game include different bonus content. Since I got the Switch version, I played 8 BIT ADV STEINS;GATE. The story is basically a slightly re-imagined and heavily truncated version of the plot from the original game. It looks and plays just like an 8-bit adventure game from the ’80s. The gameplay loop boils down to being told someone needs an item, then walking around town trying to find it, experiencing some trouble, and scrolling through menu options until you discover the right one. It’s not particularly well made, and it’s difficult to figure out where you’re supposed to go, but it was cool to see the characters and environments rendered in 8-bit, and it doesn’t take up much of your time. Although not essential, it’s a fun diversion.

To address the most important question: is this the best version of Steins;Gate? For me, yes. Elite maintains the same excellent story and characters from the original, along with being immersive in the way that the television show was. If you’ve only watched the anime, this is worth checking out for the additional endings and science themes. If you’ve played the visual novel, this might be worth a pass, but the animation might be enough to make this a new experience for you. If you’ve never experienced Steins;Gate before, or you’re new to visual novels, the vibrant characters, compelling story, and beautiful animation make this a perfect entry point.

Virtually no gameplay, some outdated conversations about gender issues.

The definitive way to experience one of the best visual novels.