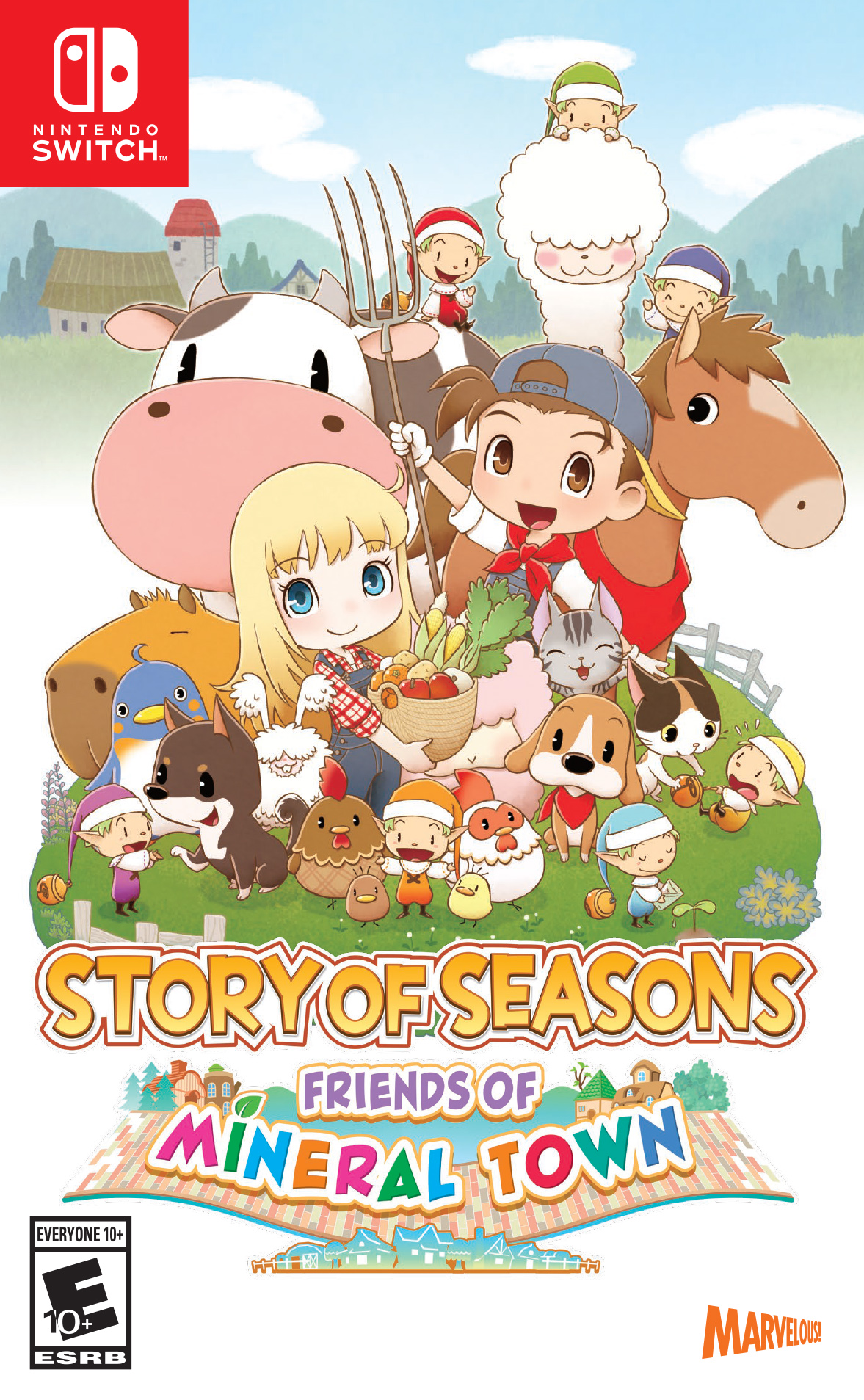 Scroll to the end to see the video version of this review!

While Story of Seasons: Friends of Mineral Town is a very faithful experience compared to the original, it’s in the modernizations that it really shines.

When it comes to farming, the best classic element retained is the simplicity. Without any added complexities, just planting seeds and tending to the animals, Friends of Mineral Town is painlessly easy to jump right into. And jump right in you do — only a short expositional scene stands between starting a new game and diving into farm life. But past this, it’s the modern-day upgrades that make your foray into farming a gratifying one. Navigating through the rucksack has been mapped to the D-pad for tools and C-stick for items, resulting in seamless juggling. Whether going from milker to brush and back while caring for animals or taking out just the right gifts for the nearby townsfolk, there’s no need to stop the flow of the game to open menus and rummage around for what you need. The tools and items are also cleverly implemented as heads-up displays in the lower left and right corners of the screen, respectively, both aligning with their controller buttons and remaining visually unobtrusive. There are also notable quality-of-life updates when it comes to caring for livestock: a handy bell outside the barn and coop will signal for the animals to come outside to graze when rung, preserving your fodder for rainy days. Animals also return into their homes automatically at 8 p.m. each night, giving you the opportunity to focus on other tasks after completing your daily livestock care rather than having to remember to herd them back inside later.

But where Friends of Mineral Town does not upgrade (at least not entirely) is the grid system. Free character movement with the control stick on an entirely grid-based plane can make some tasks feel a bit clunky. Animal hitboxes can also feel a tad awkward; interacting with smaller animals requires nearly pinpoint accuracy while larger animals may clip into each other, leading to inaccurate hit detection. This can be especially frustrating when you think you’re in-line to brush, milk, or shear an animal, but end up whiffing completely as the animation plays out and stamina is still consumed. On the field, it is natural for the crops to adhere to the grid, and related tools such as the hoe and watering can are designed with this in mind. Any awkward alignments are alleviated by holding the ZR button to strafe, but similar small hitboxes on the crops means you may find yourself fumbling to pick them when ready. Crops also don’t have a button indicator to show they’re ready for harvest like in previous games. While this isn’t an issue for the more obvious crops, others may not be so clear-cut.

Similar complications arise when foraging. Small hitbox detection on a grid-based plane means you may not pick up an item even if it looks like you’re in the vicinity to do so. But even worse is the lack of button indicator showing items can be picked up at all. Again, some are more obvious, such as the different-colored grasses, thanks to their more fantastical designs. But others, such as the Toy Flowers during the spring season, fit in perfectly with their surroundings. Especially baffling is how setpieces do have indicators, but interacting with them is pointless as it only informs you on what they are. The game tells you that you can press A on the bench not to sit on it, but to tell you that it is, indeed, a “Bench,” yet nothing appears at all for items you can pick up. It may not take very long to get accustomed to what the foragable items are and what is just part of the background, but the times when you’re not aligned exactly to pick them up may leave even seasoned players second-guessing themselves.

But as with farming, foraging and item collecting are improved where new features are added. Any instance of getting material from something else — such as mining, crushing boulders, or milking cows — would have you go through an animation of putting the retrieved item into your bag in the originals. Now, however, the resulting items satisfyingly spring out from the source, and they get picked up magnetically while you’re in their vicinity. It may seem cosmetic at first, but it’s a blessing in the mines that allows you to keep swinging your hammer and stay on the move while the ores you find automatically jump into your rucksack. There’s also a satisfying feel to see many materials, such as lumber from chopping large stumps or hidden coins from tilling the field, all swoop together as you go about your daily chores.

The area where modernizations shine brightest, however, is in relationship-building. All characters, but most notably the bachelors and bachelorettes, make their return with fresh redesigns that maintain their essence without feeling boring. This particular cast has made many appearances throughout the storied history of Harvest Moon/Story of Seasons, so there’s a rush of joy when seeing new looks for these familiar faces. There are also two all-new potential love interests: Brandon, the eccentric artist, and Jennifer, the eclectic free spirit. The most notable part of this, clearly, is gay marriage. Regardless of whether you choose to play as a boy or girl, you can marry any of the potential love interests, even the hidden ones. The normal (not hidden, as that’s part of what makes them “hidden”) bachelors and bachelorettes will also display a heart icon when they speak that indicates their level of affection towards you. In addition, you’ll always receive a child, regardless of the gender of your spouse. This is nothing short of a massive step forward for the series that allows anyone who plays to do so how they desire, and is hopefully here to stay in future entries.

Still, relationship-building is not without its flaws, remnants from the original games. Newer games began showing character icons on the map to signal where characters are at a given time, but this did not make a return in Friends of Mineral Town. It can feel like a wild goose chase looking for a character to give a gift to because of the many buildings and how diverse each and every character’s daily schedules can be. While you’re perusing a guide to make note of your target of affection, you might as well keep it open for triggering character-specific “heart events,” required for progressing in your relationship and eventually getting married. The requirements for activating these events can seem practically random at times, and even some non-hidden candidates have extra requirements that are not made clear at all, such as requiring high friendship values with bachelorette Popuri and children Mei and Yu in order to see one of bachelor Cliff’s heart events.

Getting married doesn’t always feel much different from dating or even the earliest stages of relationship-building. Some characters don’t get “days off” to stay at home, so you may not see them at all save for a brief time when you wake up. This is particularly bothersome if, for example, you marry Rick, who has no days off and doesn’t return home until past 10 p.m.! In such a case, be prepared to either extend your daily to-do list and stay up late to welcome him home, or call it a day from around 6 to 8 pm like usual and have immersion completely broken when you find yourself pregnant one morning. In the previous game in the series, Story of Seasons: Trio of Towns, getting married came with lifestyle changes that made it feel different from the regular gift-giving phase of the relationship. You could even interact with your home’s table at certain hours of the day to eat meals together with your significant other, which made marriage feel special and had you growing even more attached to your spouse. Although Friends of Mineral Town is meant to be a remake of a much older game and is therefore under no obligation to utilize more recent additions — and does forego them well when keeping the farming mechanics simple and accessible — there is no avoiding a pang of disappointment when approaching your table, seeing the interaction indicator pop up above it, and pressing A only to result in a text box reading “Table.”

Where the enigmatic features actually prove beneficial, however, is in the sheer amount of content packed into Friends of Mineral Town. You’re rewarded for breaking out of your comfort zone and trying all sorts of things. Exploring a tiny opening behind the church rewards you with discovering the Nature Sprites, who prove to be an immense help with farm chores once you’ve befriended them. Giving gifts to townsfolk of the non-romanceable variety results in recipes in return, or even special events. You’ll find you want to tune in on the TV to find even more recipes. Unlocking pets is particularly peculiar yet worthwhile, as you can own more than one and have multiple species to choose from this time around. While you may want to refer to a guide for unlocking some of these features, it doesn’t detract from how many there are. It’s possible to forget some of the game’s drawbacks when immersing yourself in the sheer amount there is to do.

Ultimately, Friends of Mineral Town is a game for people who want freedom — freedom to prioritize your daily activities, freedom to marry who you want, freedom to explore and discover. And while some of this freedom comes from well-preserved classic elements, such as a complete lack of guidance that makes your achievements feel rightfully rewarding, a lot of it comes from additions unique to this remake. Many aspects of the game benefit greatly from their new or revamped features, but others still are kept too close to the original in ways that don’t feel nearly as beneficial. As a result, Friends of Mineral Town reminds players of what made the originals so delightfully charming while also cultivating an appreciation for the strides forward the series has made since. Like the rest of the series, Friends of Mineral Town is a satisfying and endearing experience, and its simplicity makes it a great entryway for newcomers. For those well-versed in the series, Friends of Mineral Town offers a pleasant return to the basics with a lot of hidden depth despite its shortcomings.

Many fantastic modernizations, such as quality-of-life upgrades and gay marriage, while retaining the charm and freedom of the original.

Some elements are kept too faithful to the original, leading to some awkward interactions and missed opportunities.

Friends of Mineral Town has moments where certain features would have benefitted from further modern upgrades, but this is still a satisfying remake of the beloved classics.