Story of Seasons: Trio of Towns

It has all but perfected the farming mechanics, and its cast is colorful and cheerful; but ultimately, there's not enough innovation to make it stand out against recent entries in the series. 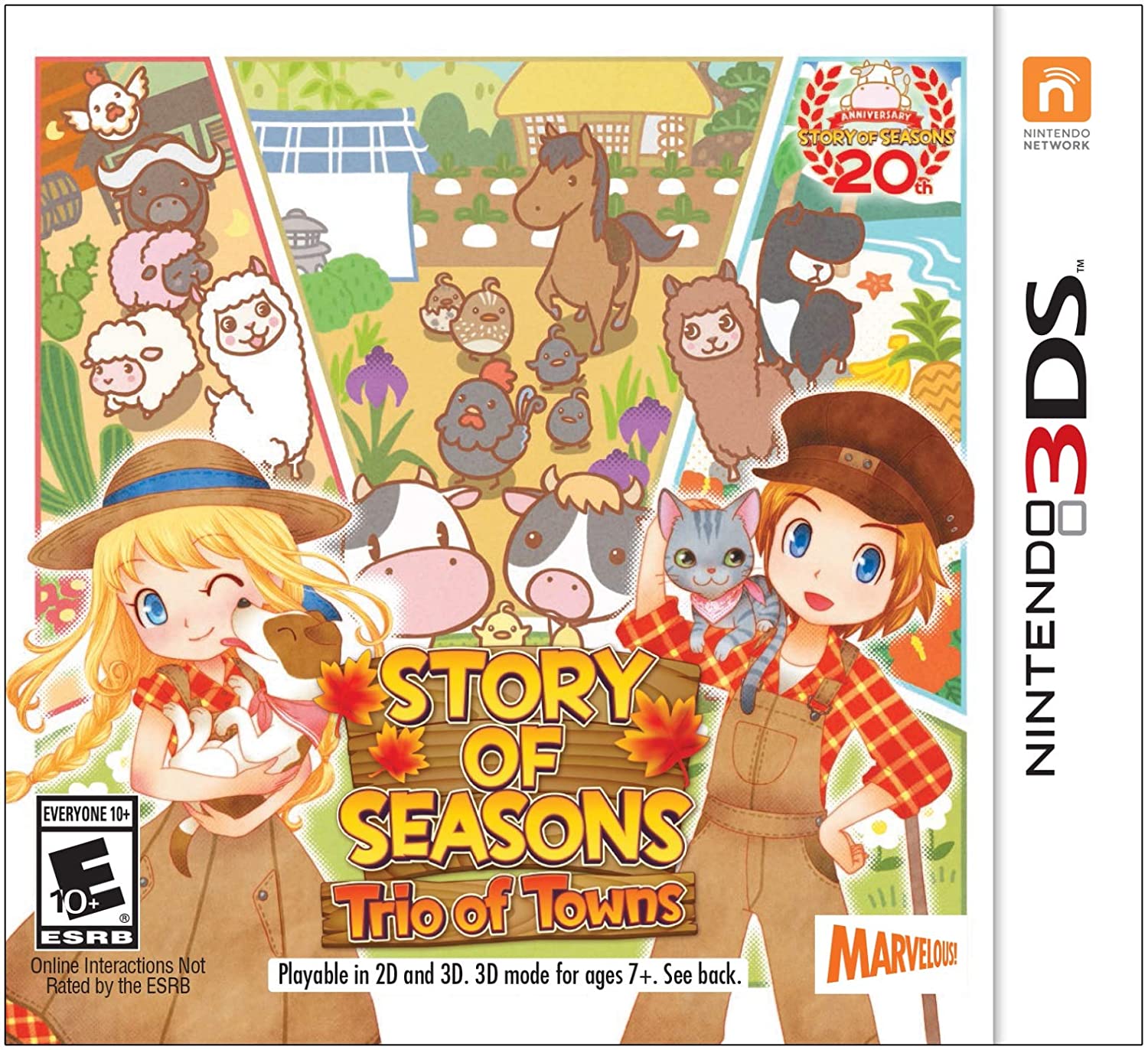 The Bokujō Monogatari series, which was previously known as Harvest Moon, is now known as Story of Seasons due to issues with the naming rights (though, confusingly, Harvest Moon has become its own separate franchise via the series’ original publisher, Natsume). Regardless of the name, the series has always been a peculiar one. Captivating gamers since the SNES days, it doesn’t cast you as a hero setting out to save the world on an epic quest, but rather as an everyday person who finds themself in possession of their own farm. You’re armed with a watering can instead of a sword, and fight off the fatigue that comes from doing daily farm and ranch activities in lieu of monsters.

It seems odd to make a game where the entire concept relies on performing virtual chores, but it’s one that’s proven to be successful for decades. Trio of Towns is the latest installment in the franchise, coming out just in time for the series’ 20th anniversary. Unfortunately, it feels less like a celebration of the franchise’s history and more like the same old song and dance. I’ve played Trio of Towns a dozen times in the course of my life—it just went by different titles.

Tending to your crops and ranch (should you choose to have one) is still as addictive as ever. There’s an immense sense of satisfaction watching crops go from seeds to produce because you tended to them every day. Likewise, it’s nice to check up on how much your animals like you based on how well you take care of them; grown cows, for example, need to be brushed and milked every day, whereas an animal like a chicken simply needs to be held for it to grow more fond of you. Maintaining a proper farm has always felt rewarding in these games, and the same holds true for this entry.

What appealed to me the most was the amount of customization players can have over their farm. Maybe you want your fields right beside your house, or maybe you’ll save that space for your eventual farming facilities, such as a seed maker and dairy factory. Perhaps a better idea would be to use that space for a fish hatchery and beehive, or for special fields that grow only paddy crops. There’s a lot to consider, and I’m not even including the decorations you can place to match your house’s aesthetic.

As the name implies, there are three different towns that intersect with your plot of land. There’s the Western-themed Westown, the Asian-inspired Tsuyukusa, and the tropical-like Lulukoko. Each of these towns offers not only their own bachelors and bachelorettes, but livestock, crops, recipes, clothes, and festivals as well. Completing certain in-game tasks will raise your rank with these towns, and doing so will increase the variety in their stores.

The problem with Trio of Towns is that there already exists a better game in the farming simulation RPG genre—Stardew Valley. What makes this indie hit shine brighter than Trio of Towns is how it feels so much more intimate in regards to its characters. Towns has the upper hand in terms of quantity when it comes to the cast, but they all feel so one-note. The skits involving the characters are supposed to serve as a way to make you feel closer to them, and while I admittedly found them to be very charming, I never felt that there was anything more to the cast below their bubbly surface.

The cast in Stardew Valley, however, feel much more realistic. These are characters that have real problems, and they slowly tell you about them only when you prove that you can be trusted. The mechanics for building relationships are pretty much the same in both games (talk to people while giving them a present once a day), but the pay off is better in Stardew Valley because the characters are more interesting.

Trio of Towns seems to function best as a starting point to the franchise, and possibly the entire genre. It has all but perfected the farming mechanics, and its cast is colorful and cheerful; but ultimately, there’s not enough innovation to make it stand out against recent entries in the series. Story of Seasons needs to pay attention to what made players flock to Stardew Valley as it moves ahead. This franchise needs to be updated with better writing, a stronger cast, and things such as non-heterosexual romance options in order to move forward successfully.

Deeply addictive and rewarding gameplay, charming art style, distinct villages, and a great number of options for customizing your farm.

Boring sound design, a less-than-captivating cast, and an overall lack of innovation.

20 years later, Trio of Towns fits nicely into the mold that the series has made for itself. Failure to break out of it in the next entry, though, could be a great misstep for this farming franchise.