Suikoden is a game that is strong in all of its individual facets, and is also equal to the sum of its parts. 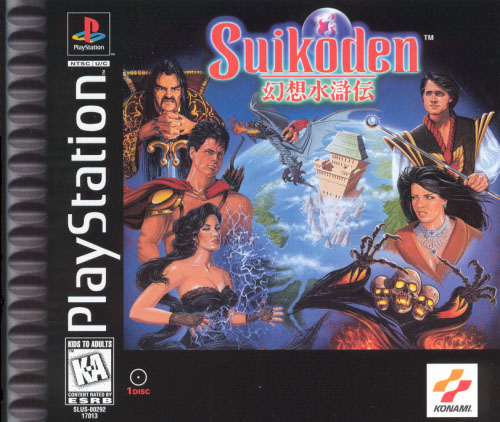 Suikoden, Konami’s first RPG for a 32-bit system, is generally also considered to be the first excellent RPG on the current generation of consoles (Mystaria was merely pretty good, while Beyond the Beyond was pretty bad). Although it broke no new ground technologically (just about everything other than the streamed soundtrack could probably have been done just as well on the SNES), Suikoden sold very well in the US upon its release. Its success was well deserved; Suikoden is a game that is strong in all of its individual facets, and is also equal to the sum of its parts.

The story of Suikoden, loosely based on an ancient Chinese story, begins in the Imperial capital of Gregminster. You play as the son of celebrated Imperial general Teo McDohl (you choose the first name of your main character). The main character is scheduled to begin his first day of work for the Empire the next morning, and he learns that General Teo must immediately leave to help settle a border skirmish. Bidding his father farewell, he goes to sleep that night, unaware of the twists and turns his life will take.

As he begins to work for the Empire, the main character meets many people who cause him to question the ethics of his employer and, later, his loyalty to the Empire. Eventually, the main character ends up rebelling against his former country, and raises a huge army in an effort to defeat it.

As you can see, the storyline takes place on a grand scale, and it is interesting and well written throughout the game. Many plot twists abound in Suikoden, and there are some emotional moments as well. With 108 characters in your camp, character development is obviously going to take a backseat, but the game does a pretty good job of putting personality into the more major characters. The ending is also quite well done; a good amount of closure is given to the story, and you get a short description of what becomes of each one of the characters that joins you.

Konami’s translation is also pretty good. Spelling and grammatical errors are kept to a minimum, and much of the dialogue is humorous and has personality to it. However, the dialogue is pretty inconsistent. Some of it flows well, but a lot of is somewhat clumsy. In addition, characters will sometimes say things that seem completely out of character for them. For example, many of the seemingly mature characters in Suikoden will suddenly engage in a war of words at the drop of a hat over nothing. This leaves a lot of inconsistency in the character development, and is quite annoying.

Suikoden’s gameplay is mostly tried and true RPG fare, with a few noteworthy and innovative features. One such feature is the weapon upgrading system. Instead of buying new weapons, you upgrade your weapons in Suikoden by having a blacksmith forge your current weapon into a stronger one. You will also build a castle of your own, and as you get people to join your cause, your castle expands. At some points in the game, you’ll have to fight some large-scale strategy battles that play similarly to those of the Romance of the Three Kingdoms games.

In the standard battles, Suikoden stands out as well. You can have up to 6 characters in your attack party at once, which is double the standard number in most of today’s RPGs. This increased number of characters increases the strategy involved in battles, and it would be nice if more RPG programmers followed this lead. Special attacks and spells are bestowed upon a character by runes, and each character can have one rune equipped at a time. In addition, certain characters can combine their attacks with each other. These unite attacks also have a variety of effects.

There are a few minor weaknesses in gameplay, however. Many of the characters that join you are weak and have little to do with the storyline, so unless you have a lot of free time on your hands, there is little incentive to try them out. Items are not pooled in this game as they are in most RPGs; characters each hold their own. While this is more realistic and adds some strategy, it wastes a lot of time in menu management, particularly when you want to switch new characters into your party. In addition, the game is kind of short, and feels short. The strengths of the gameplay do far outweigh the weaknesses, though.

Control is excellent in Suikoden. Your onscreen character, despite only being able to move in 4 directions, is responsive to the control pad, and thankfully, doesn’t bounce off of objects you are trying to check out. He moves along at a decent pace, and the menus are reasonably well organized and easy to navigate as well.

However, there are some weaknesses in the control. There is no dash button in the area maps, and your main character really doesn’t move fast enough through them to make up for the absence of the dash button. Some of the menu screens (such as the character list) have to be loaded up before they can be accessed, and the loading time is annoyingly long. Also, some of the menus are rather small; instead of making them bigger, the game forces you to go between pages of the particular menu.

Suikoden’s graphics are excellent, for the most part. The area maps are beautifully hand-drawn 2D maps, and are colorful as well as detailed. There is also an excellent variety of backgrounds in area maps throughout the game. The onscreen characters are very detailed as well in the area maps, and are of realistic proportions (as opposed to being superdeformed). The animation of these characters, however, is a little bit choppy.

The battle screens are similarly excellent. The backgrounds are of the same quality detail as those of the area maps. Enemies have a good level of detail, and your characters look pretty much the same as they do in the area maps (except that they have weapons). The animation is still a bit choppy, but the spell effects look great. Bosses look good, but won’t blow away anybody.

The world map, however, leaves a little to be desired. The backgrounds, while small, have a reasonable level of detail and are colorful. However, your onscreen character is tiny, poorly drawn, animates only in 2 frames, and is severely lacking in detail. On the world map, he looks like something out of an 8-bit NES game, and a poor one at that. The graphics in the large-scale strategy battles are comparable to those of the world map.

Suikoden’s character designs are excellent, but I wasn’t too impressed by the art in the character portraits that pop up when the characters converse. The art is inconsistent in quality (some of it looked great, while some of it was awful), and is somewhat lacking in color as well. I think the artist was going for a sort of a “watercolor” look rather than an anime look, but it’s really hard to tell (unless you look closely) that some of the art isn’t just a hash job.

Suikoden’s sound is very noteworthy. The sound effects are nothing special; some of them are kind of annoying (such as the sound of you hitting enemies and the sound that pops up when you go through menus). But the soundtrack is excellent. Suikoden’s soundtrack carries a lot of stylistic variety (influences seem to include ancient Chinese music, classical, and even John Denver), and the composition of most of the songs is excellent. Many of the tunes are quite memorable as well in their melodies. The soundtrack is streamed, so the sound quality is higher than that of most of the other 32-bit soundtracks out there too. There is, however, no spoken dialogue in the game.

In my opinion, Suikoden was the runner-up to Dragon Force as the best game to hit these shores in 1996. A testament to its excellence is that even though it was released over 2 years ago, it is still one of the very best 32-bit games you can get today. I strongly recommend this one to all RPG fans.