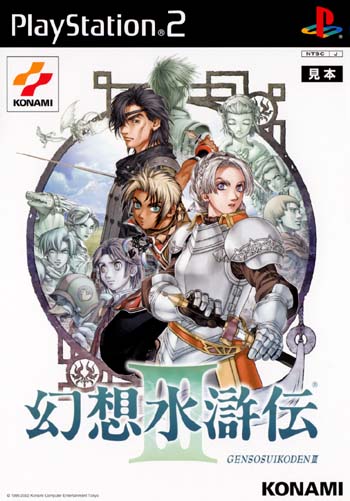 I remember the original Suikoden very well. It was the first game I bought for my PlayStation and with a month still lingering before FFVII was to be released, I decided to spend the month playing the two decent RPGs that were available at time: Suikoden and Wild Arms. While Suikoden had some interesting systems in the way of army battles and dueling, its decidedly run of the mill story (even for its time) and drab characters make me glad that it didn’t run much longer than 20 hours. Suikoden II improved the series in all fronts but it was still a game that was good, but not great. When I first heard of a new Genso Suikoden game, I mentally put it under my “buy if nothing else good comes out” pile and promptly forgot about it.

Though I know a lot of people I knew weren’t too impressed with what was shown (can’t blame them, since footage of MGS2: Substance was shown on the widescreen right on top of the demo machine), I thought the game showed a lot of promise and immediately put the title on my ‘to buy’ list.

-It Starts With A Peace Treaty…-

15 years after the events of Suikoden II, Suikoden III puts us in the Grasslands, home of the legendary Fire Hero. While the Fire Hero was able to buy 50 years of peace from the Harmonia Kingdom through a non-aggression pact, the Grasslands were still open to attack from its other neighbors, most recently by The Zeksen Federation to the west.

After numerous battles and heavy casualties on each side, they agree to a peace treaty…when everything suddenly goes wrong. The Lizard Clan’s chief gets assassinated by what looks to be Federation soldiers, essentially restarting a war that neither side have the strength to continue.

Meanwhile to the east, certain people within the Harmonia Kingdom were counting the days for the non-aggression pact to run out and resume their attack on the Grasslands and its bordering kingdoms…

The weakest part of Suikoden is probably its graphics, or more particularity, the character detail. The amount of textures used for detail are decidedly low, resulting in some characters not having noses, among other things. Yet at the same time, this gives them a certain super deformed feel, making the characters in the game feel more like converted 2D characters than 3D ones. It’s a style that I’m rather fond of, but there are times when I wish they could’ve spiced up the characters a bit more.

The backgrounds, on the other hand, are nicely detailed and the pale colors that much of the game uses only adds to the general serious tone that the title has.

While the basic story of Suikoden III isn’t anything new, the fresh presentation of it, as well a good balance of both serious and light-hearted moments, makes it a very satisfying experience.

Dubbed the Trinity Sight System, the game allows you to choose whose perspective you want to play as, and then makes you switch perspectives at the end of each ‘chapter’. There are three main perspectives that you can play as, each as a member of the three main factions present in the game.

In addition to the main ‘Trinity’ of perspectives, there are three additional side perspectives you can unlock throughout the game. While you don’t have to play these to beat the game, they help flesh out the world of Suikoden very well.

Like all Suikoden games, there are essentially four parts of the gameplay in Suikoden III.

First, of course, are the usual 6+1(support) member party battles. This part plays like anything other…but there’s a small twist. The party set up is made of three pairs, with one person the forward and other the rear. You can only give commands to your characters in pairs, so you lose a lot of fine control in your battles. This means that only one person in each pair can cast a spell, use an item, etc. while the remaining members just hack and slash their way through enemies. In addition to that, items used can only be used by the pair set up, so you have make sure all members have healing items and the like.

While this is a bit awkward at first, it actually works rather well, since it does wonders in cutting down battle time. It does get annoying on occasion, but it’s not as a big of a deal as it first seems at first.

In addition to this, you also have Combination Attacks and Ride-Ons. Combination Attacks are pretty much self-explanatory. You just have the right characters paired up and you can unlock special attacks. Ride-Ons are similar, but it involves a human character riding on some animal for attack and defense bonuses.

A new addition is the skill system. You gain skill points at the end of each battle and you can spend them in skills to gain new skills that will boost your stats.

The spell system in Suikoden III is essentially the same as before. Spells are tied to emblems that have their own spell points for each spell level, with the most points being invested to the lowest spell level. The only thing that’s quite annoying at first is there’s a number of area effect attack spells, which may also hit your own party members. This will happen less and less as your spell casters get more powerful, but this does mean that your spell casters will be more of a liability than help early on in the game.

The best thing about the battles in Suikoden is the fact that there’s not that many of them (relatively speaking). I don’t write this to mean that I don’t like the battles, but Suikoden III has one of the lowest encounter rates I’ve ever seen in an RPG, which is a definite plus in my book.

Next up is the duel system. This part of the game is exactly the same as it always was, and is also as silly as ever. For those unfamiliar with it, the duel system is a one on one battle where you get a special set of commands to fight. While this may sound like you actually need some skill to use, you essentially end up listening to the enemy’s battle taunts to decide what you should do. A sample duel will go something like this:

Enemy:That was a nice block! It’s now my turn! (You:Attack)

Enemy:Is that all you got? Try hitting me again! (You:Attack)

It’s a decent enough of a diversion, I suppose, but it’s not exactly an engrossing part of the game.

Large-scale battles in Suikoden are treated very similarly to regular party battles. Taking place on a large overhead board with numerous ‘squadrons’ about, the only difference between this and regular battles is that you control many more parties (up to 10), party size is limited to 4 units per squad, and that you have no direct control over the battles. The only thing you can do is to set basic attack, defense, and spell commands and have each army move around the map, but all battles are AI controlled. In addition, a squad is considered to be defeated if you lose your squad leader, so you have to choose your leaders carefully. The last thing you want is to have a level 10 character lead a level 50 army.

-A Party Over at Thomas’ Castle!-

Of course, Suikoden’s main draw is ability to build up your own city/castle and the large number of characters that will join your quest…for a total of 108 (sorta). You essentially build up your castle by recruiting more people to join your cause, and eventually this will allow you to play a number of mini-games and access lots of little mini-events that are just there for fun. The one thing that I liked about Suikoden III was that it’s decidedly easier to recruit people for your cause, with much less of the obscure little things you had to do in the previous games. They’re still there of course, but they tend to take less time to do than before.

I’m not exactly the best person to give opinions on music since I’m not much of a VG Music connoisseur, but I did like what I heard. The music for the opening animation was especially impressive, and all the other tracks through out the game were very solid.

I saved my main and biggest complaint about Suikoden III for last. The controls. Well…not really the controls, but the horrid camera angles. All the screens in Suikoden III are set for maximum theatrical angles…not practical ones. This means that unless you basically focus on the mini-map the entire time, you’re sure to get totally lost and be at a loss as to how to even leave the screen. This isn’t really different from other “new generation” RPGs like FFX, but the maps in Suikoden III tend to be less linear, which increases the probability of you getting lost quite a bit. Heck, the problem gets to the point where I don’t even remember how some places looked because I was so busy staring at the map.

The other complaint I have is with the fact that going left one screen will make you go East in one screen and West the other. This isn’t exactly new, but in most other games they have the good sense to allow you continue in the same general direction if you switch screens while holding down the directional button. But in Suikoden it resets…which means that you’ll be switching back and forth the two screens until you catch yourself, then you have to look at the map to figure out which direction you SHOULD be facing, then face it. It’s incredibly annoying and you don’t get used to it no matter how long you play.

-The Sum Is Greater Than Its Parts-

Suikoden III was quite a surprising experience for me. The battles are tough, there’s a lot more story, developed characters, more everything. What’s more, there are a number of returning characters that fans of the series are sure to recognize in surprising roles which is sure to be a kicker.

I played the first two games and came out satisfied but not impressed. Now, I’m eagerly waiting for the next game in the series…good thing I still have the Suiko Gaiden games to get around to.