Sword of the Necromancer
Review by Alana Hagues · February 7, 2021

It's frustrating, then, that the representation doesn't get the game it deserves. 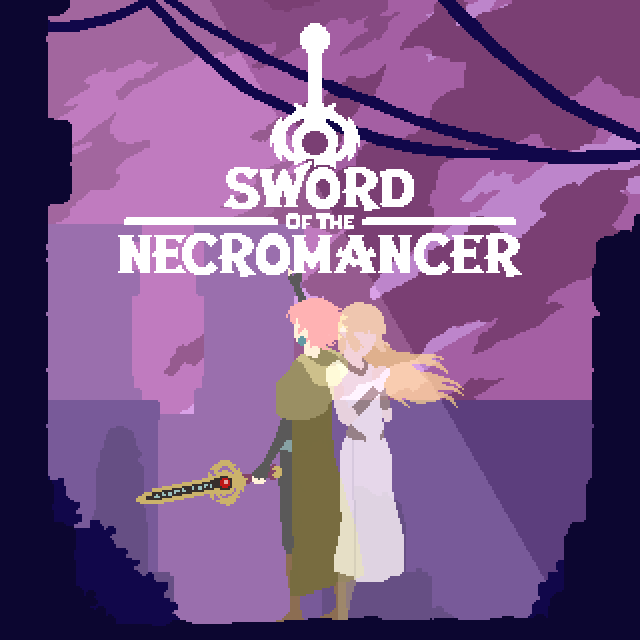 Sword of the Necromancer is the kind of game I’ve wanted to see for ages: one that takes a heteronormative story (the princess and bodyguard) and gives it a sapphic twist. Growing up, the only times women got to be the heroes, they were often uncomfortably oversexualised or only able to succeed because of a man’s help. But Grimorio of Games instead lets its two queer, female characters take centre stage without challenging their sexuality or gender. It’s frustrating, then, that the representation doesn’t get the game it deserves.

Tama, a former rogue and now-bodyguard to the priestess, and love of her life, Koko, has to delve into the Necromancer’s crypt to bring her lover back from the dead. Armed with the “Sword of the Necromancer,” Tama must unlock the sword’s full power by finding the Necromancer at the bottom of the crypt. The story itself is nothing special, filled with clumsy writing, meta-references, and awkward dialogue that feels out of place. But what keeps it barely held together is the relationship between Tama and Koko, who are the heart of the game.

Their relationship is told through flashbacks as you progress through the game, which show them meeting for the first time, embarking on a pilgrimage together, and eventually falling in love. Even with the clumsy, un-engaging story, it’s difficult not to root for Tama and Koko, even when they’re beholden to tired archetypes. It was lovely to watch them grow throughout the flashbacks and get closer as a couple. I was so happy to see a genuine, queer relationship as the focus of the story, even with a by-the-numbers plot.

Because of this, it’s especially disappointing that the rest of the game doesn’t deliver on its promises. Diving into it, you start at the altar in the crypt, which is your hub. There are five dungeon floors, with up to ten randomly-generated rooms on each, and the goal is to find the key to reach the boss, defeat it, and then move on to the next floor. If you die at any point during your run, you lose all items you have on you and half of your experience (you can, however, turn these functions off if you die three times). If you die, you have to start from the first floor, though the developers have confirmed changing this in an upcoming patch. You can leave the dungeon without losing progress by finding an escape rope or finding a green portal in the dungeon. You can then use the hub to store any preferred items that you think will come in handy on a later run.

These roguelike elements are nothing new, but there’s a unique wrinkle that makes Sword of the Necromancer stand out. Using the titular sword, Tama can resurrect any defeated monster and recruit them to fight at her side. Certain creatures are built to tank, and others’ sole function is to heal or buff you. There are also multiple variants of the dungeon residents, either with different buffs to their attack or magic, elemental properties, or even negative effects like reduced damage or critical percentage. You can also store the monsters in the chest back at the hub if you leave via a portal or rope.

At first, I enjoyed this extra layer of strategy. Recruiting my first monster and throwing them out to take care of the enemies in the room gave me time to explore and not worry about being overwhelmed. They could take damage for me when I was low on health so I could find hearts or maybe a new weapon. The idea of having a few creatures to fight at my side got me excited for the possibilities of creating combinations of teams to compliment whatever weapons I was using.

But you never really get a chance to experiment because you can only carry four items on you at any time, and it’s this restrictiveness where Sword of the Necromancer truly falls. “Items” include weapons, potions, equipment, and even monsters, and these are all mapped to the face buttons. In reality, you can only carry three items because the eponymous sword takes up one slot. This means if you find a weapon or an item that you like the look of, but all of your slots are full, you have to discard one thing and lose it forever. That could be a monster you’ve been leveling up for three floors or a healing potion that you might need for the boss.

This restrictiveness makes the unique mechanic of the game feel intrusive and as though it’s discouraged. It doesn’t help that, no matter what monsters you recruit, their AI isn’t great, and often they wander aimlessly around the screen unless there’s a monster in sight, or they get hit because they’re busy attacking something else. I actually found I did better without using companions, or for the times where I did, I used them as a distraction to stop enemies attacking me.

I might feel a bit different if the game also felt better to play. Combat feels sluggish and sometimes unresponsive, and calling up your monsters, using spellbooks (one of the weapons you can randomly pick up), and dashing all use soul, which regenerates over time but takes too long. Dashing is under-utilised, as it’s mostly for dashing over large gaps in the dungeon. You can dodge enemy attacks with it, but it’s hard when you’re using a spellbook build like me and trying to get around quickly because you’re constantly low on soul.

Even though this title takes under 20 hours to complete, I started to burn out very quickly because everything felt the same. Monster variety doesn’t get better until the fourth or fifth floors, and the bosses were all very easy. Most noticeably, every floor looked almost identical visually, with a simple colour palette swap and a few extra room variations. Most weapons felt very similar, and the damage output on most didn’t vary much. You can upgrade weapons and equipment by picking up materials and bringing them back to the altar, but it took so long to gather the right amount of materials that I almost always picked up a weapon that was much better than what I was planning to make. It’s another system that feels wasted in Sword of the Necromancer.

After a few deaths and retries, I was already fed up listening to the same musical compositions over and over, and that was before I got beyond the third floor. But when I beat the last boss for the first time, there was a twist (which I won’t spoil here) that forced me to go through the same five floors all over again, with no differences in enemies, bosses, or weapons, to see the rest of the story. It felt like another layer of punishment and restriction because I didn’t feel good about finishing that first run, and felt only a little less unsatisfied by the second completion as well.

And that’s how I feel about Sword of the Necromancer overall: unsatisfied. While its queer twist on a usually heteronormative story deserves to be recognised, the game is let down by not letting the new ideas come to fruition. It feels like I received a bouquet of violets, but instead of them being fresh and in-bloom, they are already wilting. With just a few tweaks, the bouquet could revitalise into a fun roguelike, and while it’s overall a serviceable experience, there’s really no reason to go back once you have the true ending, if you don’t feel tired out before then.

...that are underutilised and restricted, sluggish controls in combat, clumsy writing, repetitive, unexciting.

A sapphic roguelike is what the world needs, but Sword of the Necromancer doesn't give these queer characters the game they truly deserve.