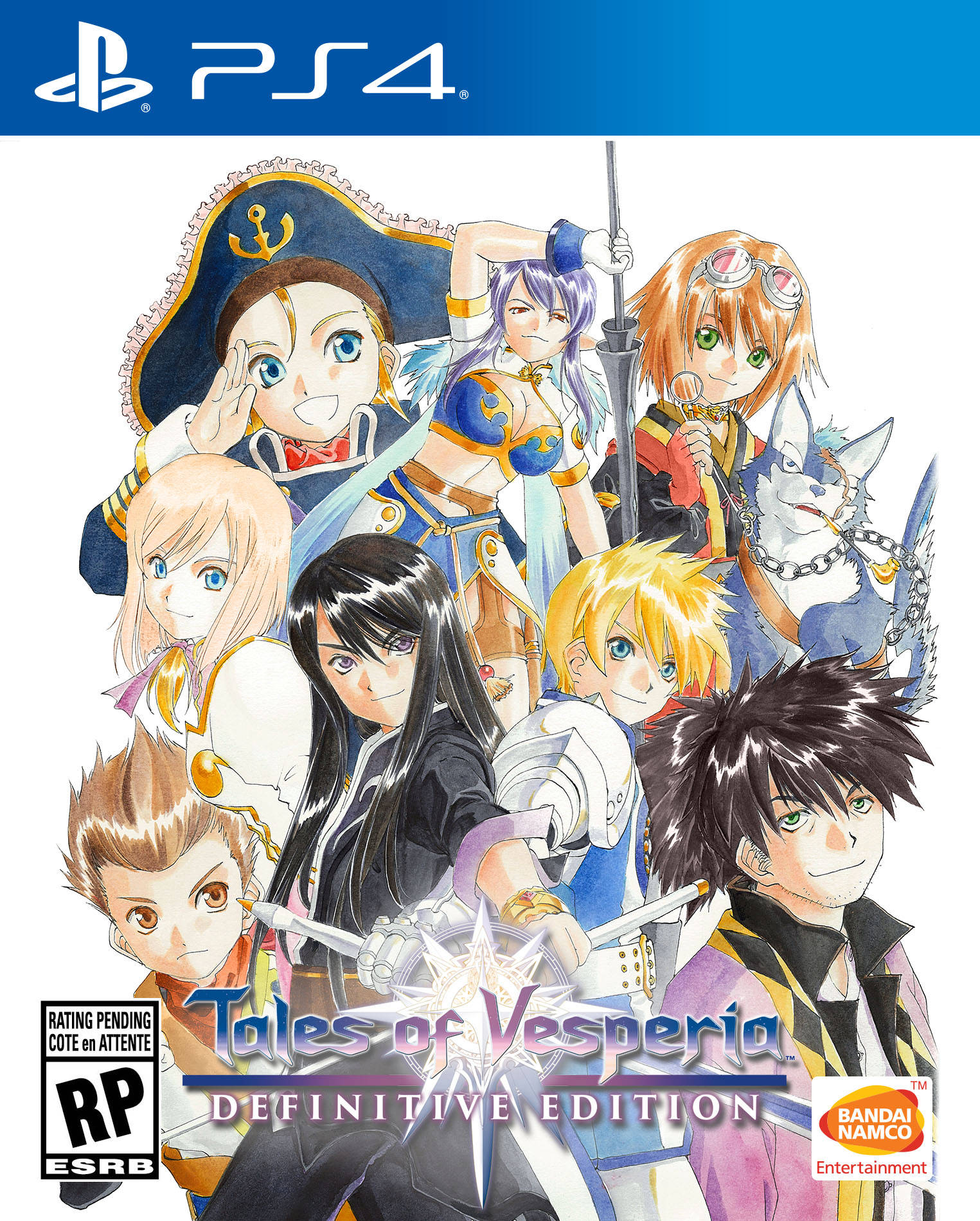 I’ve been dying to see the updated version of Tales of Vesperia for years. As soon as I found out Japan got an updated version on the PlayStation 3, I waited eagerly, like a lot of other fans. Now, ten years after the game originally launched, we finally got what we wished for and more. Tales of Vesperia: Definitive Edition is available on every current console, and while the wait has been long, it’s certainly been worth it. It’s widely regarded as the best in the series, and after playing it through again on the Switch, I can happily say it still deserves to be ranked among the very best, even if the quality of some of the new additions are questionable.

To have the PS3 version with all of the updates on every major modern console is a miracle, and with so much new stuff to jump into, both returning players and newcomers will surely have a blast.

You follow Yuri Lowell, a resident in the capital city’s lower quarter, who embarks on a quest to save his friends after a vital piece of equipment which powers a fountain (called a blastia) is stolen. Little does Yuri know that this seemingly simple quest marks the beginning of a world-spanning, life-changing adventure. Nothing has changed in Vesperia’s overall plot: it’s still typical for the series. It takes a while to really get going, and a lot of the time Yuri and his friends seem to haphazardly end up in situations that either work for or against them. Yet, at times, it’s surprisingly mature; some instances have stuck in my mind over the last ten years. Even if the final act of the game takes a sharp left turn that still doesn’t entirely sit well with me, I’ll still look back at the game fondly.

The game’s cast are still among my favourites in all RPGs and fortunately they manage to elevate proceedings. This infectious band of misfits never fail to put a smile on my face. This time around, there are two new faces in the group. First is Flynn Scifo, Yuri’s best friend and an Imperial Knight, who was a regular face in the vanilla version but becomes a fully fledged party member this time. His polite and kind nature fills a gap in the party and acts as a great contrast to Yuri’s badass, no-nonsense demeanour. The second is Patty Fleur, a pirate searching for the lost treasure of the legendary pirate Aifread. Patty is much more upbeat and excitable than Flynn, and is utterly adorable for the most part. She does feel a little more forced in than Flynn, with very little stake in the main plot, but her bubbly attitude was exactly what I needed sometimes.

With the two new characters, there’s a lot of added dialogue to make sure they’re included in the story. This means new voice acting, and the results of this are mixed; some characters sound very similar to their original voice, while others sound completely different. This can be really awkward in some cutscenes, which use the original voice cast one moment only to swap to the newer voices mid-discussion. It’s not enough to put me off, but the original dub was so good that it’s hard to overlook. The other major issue with this is the sound mixing. Skits, cutscenes and artes voiced entirely in the new voices are barely audible at times and all over the place at others. It shows a real lack of polish and will disappoint many who have been waiting for years to see these new parts in English.

Aside from these issues, all of the new stuff in the Definitive Edition is excellent. There are a bunch of free costumes available from the start, so you can get back to playing dress up with your favourite characters. The new skits bring insight into characters, or some light humour already coupled with some of the best moments in the series (who can forget Yuri’s croquettes made with love?). And then there’s a whole host of sidequests, including new dungeons to explore and new bosses to take down; one of these is a recurring series boss that many will be glad to see return for a challenge. Some of these sidequests, both old and new, are long and have very particular cut-off points, but most bring something worthwhile. I knew a lot about the PS3 additions before going in, but even I was surprised by the amount of extra detail and content.

Even though little has changed, Vesperia’s crowning achievement is still its battle system. Fights take place in an arena-type area and you directly control one character and their movements. You can run directly towards the enemy on a fixed axis, or use free run to roam about the battlefield at will. This battle system also sees the return of Technical Points (TP), which we’ve not seen since Hearts R. Each character has a series of artes or spells that consume TP, and just like MP in other RPGs. This means you need to manage yours and your party’s TP in tight situations to ensure they can continue using these attacks. New to this version is the ability to equip 16 artes rather than just 8, which gives you a lot more options for arte combinations. And there’s an extensive strategy menu where you can assign different roles to each character in a variety of situations: it makes things that much easier.

Both of the newbies have their own uses in battle. Flynn is more like a traditional magic swordsman, seen in multiple Tales of games in the past. He can use some of Yuri’s sword artes, as well as some of the more traditional series attacks like Demon Fang and Tiger Blade, coupled with light magic and healing spells. Patty, on the other hand, is a completely different beast. She can swap between four different forms which change the effects of her artes. She’s hard to grasp because she’s unconventional, but I can see her being a blast to play with when mastered. I much prefer Graces and Berseria’s systems, mainly because it takes a good 10-15 hours for Vesperia’s combat to pick up the pace, but I still had a lot of fun racking up combos and playing around with arte combinations.

After a bit of polish and upscaling, Vesperia scrubs up really well. This is largely due to the cel-shaded style that future entries would base their visuals on, but Vesperia’s world is much more bright and beautiful than many of the later games. You can definitely still tell it’s a PS3 game, with a few flat faces on some of the NPCs, but I find it more appealing to look at. Battles run at a smooth 60 FPS across all versions, and I never experienced any slowdown or issues while fighting both docked and undocked. For the Switch version, and the Xbox One version, the game runs at 30 FPS outside of battle. This isn’t too noticeable for the most part, especially while playing it undocked, but in certain towns where there are lots of NPCs or where it’s raining, you can really notice the framerate dip.

Despite the inconsistencies and lack of polish in a few areas, Tales of Vesperia: Definitive Edition comes highly recommended. To have the PS3 version with all of the updates on every major modern console is a miracle, and with so much new stuff to jump into, both returning players and newcomers will surely have a blast. I loved revisiting Terca Lumireis, and having one of my favourite Tales of games in the palm of my hands is the sweetest deal of them all. If you missed out on this the first time, now’s the time to pick up the best version of this game.

So much new content such as bosses, skits, cutscenes and costumes; battle system is still excellent; the best cast in the series is back; upscaled graphics look lovely.

Inconsistent sound mixing in the new cutscenes, mix of old and new voices is jarring, lower framerate on Switch version outside of battle is very noticeable in places, a slow start.

Minor blemishes aside, Tales of Vesperia: Definitive Edition lives up to its namesake and is still among the best Tales of games ever.

DISCLAIMER
This article is based on a free copy of a game/album provided to RPGFan by the publisher or PR firm. This relationship in no way influenced the author's opinion or score (if applicable). Learn more on our ethics & policies page. For information on our scoring systems, see our scoring systems overview.
Share This »