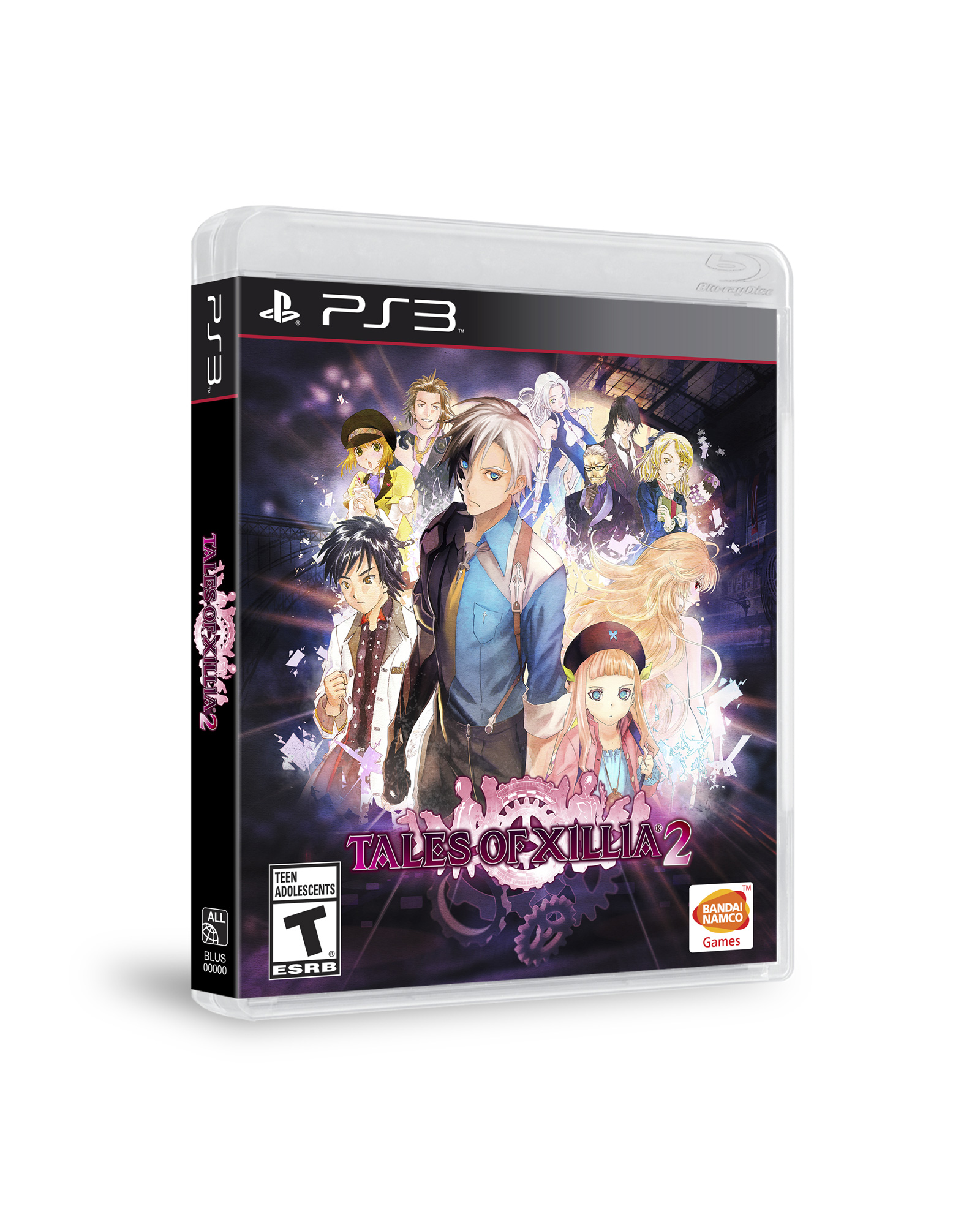 Though many fans, myself included, would say that Tales of Xillia was an incredible game, it is undeniable that it felt rather rushed to completion, possibly to meet the deadline for the series’ 15th anniversary. Certain story arcs were given quick wrap ups, the game ended with an uncertain conclusion, and extraneous post-game content was almost non-existent. It stood to reason, then, that when another Xillia-related project was announced by Namco Bandai, fans were all but certain it would be a director’s cut of Xillia. To their surprise, this new project turned out to be a sequel, with the goal of giving closure to the story of Xillia while fixing the problems of its predecessor. The result is very much two steps forward, one step back.

While [Tales of Xillia 2] hits many notes perfectly, it also gets some things terribly wrong.

Tales of Xillia 2 follows the adventures of Ludger Will Kresnik, a young man who has hopes of working as an agent for the Spirius Corporation, a massive company in Elympios. Elympios, a technology-based society, is currently in the process of negotiating a peace with Reize Maxia, the country of advanced magic, in the wake of the events of the previous game. However, a large amount of prejudice and misconceptions on both sides continues to threaten a prolonged peace. In the midst of this, Ludger is caught in a terrorist attack after being accused of pedophilia by an odd young girl named Elle — not the best start to his first day on the job. Ludger eventually comes under the protection of the Spirius Corporation after his older brother Julius is implicated in the terrorist attack, and in the process he becomes involved in a strange phenomenon involving alternate dimensions and strange ancient powers of a chosen bloodline.

Xillia 2 spends much of its main story centered on a story involving the proliferation of multiple dimensions, each stemming from the prime dimension that the characters of Xillia 2 inhabits. Tales of Xillia 2 could be considered the Chrono Cross to Xillia’s Chrono Trigger, but without the philosophical undertones about the meaning of life and humanity’s place in the world. The main story is fairly straightforward and mediocre, and only really hits all the right notes near the end of the game. As a plot that drives the character’s actions, it is serviceable, but it never fully explores the implications of its backstory and thus largely wastes its potential.

What really carries Xillia 2 is the cast. While the main scenario may be by the numbers, the characters are fleshed out incredibly well through their character quests and individual interactions. Each character has a short side quest over the course of the game that develops what they have been doing since the end of the previous game. What is poignant about these vignettes is the method in which they approach each character’s world view; a quest that starts with a tired hunt for a stuffed animal turns into a sobering realization about the real world, while another may begin with an effort to improve one’s cooking, but end with a reflection of the memories of those lost. Completing these sidequests not only serves as a window into these characters’ personalities and struggles but also unlocks special scenes with them during the main storyline. Ludger himself serves as a silent player avatar who can choose responses to other characters during skits and pertinent conversations. While these choices ultimately matter little to the overarching storyline, they contribute a great deal to fleshing out Ludger and the other characters. The character-building moments create an incredibly diverse and rich cast that have excellent chemistry with each other, making the ending one of the most satisfying in Tales history.

A lot of this would be lost without the detailed character models. While nothing special in a technical sense — the graphics are actually a bit washed out in terms of color and contrast — Namco Bandai has all but perfected the art of a “playable anime.” Similarly, while nothing special on the music side, the voice actors for Xillia 2 give an excellent performance that helps to bring the characters to life. The combination of detailed visual fidelity and excellent voice work do much to create player investment in the fate of these characters, only magnifying when plot twists regarding their ultimate futures are revealed.

The gameplay is pulled from the previous game with a few added features. It still employs the linear motion battle system the Tales series is well known for, and the AC/TP system makes the full transition as well. Each action a character takes that isn’t related to movement depletes AC, and cessation of actions restores AC. TP drains as special moves are used so that the player is discouraged from spamming artes for entire battles. The combination of both the AC and TP system makes battles much more freeform rather than utilizing the basic “attack 3 or 4 times and end with an arte” combo so widely seen in previous Tales games. Further character skills expand this freedom in the battle system as characters gain abilities that modify special attacks, enable more elaborate combat styles like air combos, and give bonuses towards alternate attack modes. Each character has a definitive combat style, making each character play differently, as well as a character skill that becomes active when the character is linked to in battle and provides crucial support when needed. The problem is that the player is actively handicapped if s/he plays as any character other than Ludger; not only is Ludger the only one who has free access to all three potential types of physical attacks (blunt, slash, and pierce), he is also the only character with the Chromatus ability, which transforms him into an invincible warrior with unique and powerful attacks for a limited time. While every character has access to the over limit bar that enables link and mystic artes, Ludger has such a distinct advantage over the other characters that there’s almost never a reason to use any other character.

The character progression system itself has gone through a well-deserved evolution: characters now level normally but don’t learn skills naturally. Instead, they can equip Allium Orb extractors that are each tuned to a different combination of six elements: fire, water, earth, wind, light, and dark. Characters learn new skills and artes as they earn AP that are accrued in the elements that their equipped extractor provides. Many skills and artes require points in more than one element to be learned, so it’s crucial for the player to not let each character only have one extractor equipped for an extended period. Later on, extractors that multiply the AP earned or accrue AP in more than one element become available to the player, allowing for greater customization and faster growth among the party members.

This all sounds well and good, and makes Xillia’s character progression and battle system one of the most rewarding and fun to play in the series. What, then is the problem?

Early on in the story, Ludger is saddled with a 20,000,000 gald debt by an unscrupulous loan shark who charges an outrageous amount of money for his healing services. The main story happens in chapters, and in between each chapter, Ludger has to earn enough money to pay off a chunk of the debt before he is allowed to continue to the next plot point. In order to earn money, the player has to engage in MMO-esque jobs that require killing a certain number of monsters, bringing back a certain number of specific items, or occasionally defeating a sub boss “Gigant” monster. What’s worse is that once the player earns past a certain amount, the loan shark’s lackey will pop up on screen to demand Ludger fork over whatever cash he has. The player is not allowed to exit this screen until the required amount is paid. This causes the story’s pacing to be incredibly disjointed and almost completely robs any impact the plot has. The momentum of the narrative is completely halted every few hours due to the necessity of grinding out menial tasks to earn money for repaying the debt.

In fact, while Xillia 2 does offer up much more post-game content than its predecessor, it also artificially extends the play time by quite a bit by making grinding a requirement in order to make any progress in the extra content. While my game counter at the endgame was in excess of 100 hours, there is little doubt in my mind that more than half of it was spent on tedious legwork and MMO-style fetch quests. In a game like Tales of Xillia 2, this kind of game design structure isn’t just unnecessary, it’s offensive. The reason for this artificial drawing out of the game may lie with the fact that the main scenario only accounts for a minuscule portion of the game. The overall story would likely only fill out about 15 to 20 hours of gameplay time, with the character quests offering up another 10 to 15 hours, if I’m being generous. It almost feels as if the developers were at a loss as to how much they could fit into the story, so they included all the grinding to hide the fact that the game was shorter than usual. The fact that a good number of the locations and character models in the game are re-purposed assets from the first Xillia only adds to the feel that Xillia 2 was meant to be an expansion rather than a full sequel. It’s a shame, because the extra content is actually quite entertaining when one gets past all the grinding required to progress. There are character affections to manage, battles with shadow versions of the main characters, fights with previous Tales protagonists, and a New Game+ feature that uses grade earned by achieving certain feats and milestones in the game’s story and battles. The problem is that most players will give up before seeing any of this due to the fact that it takes so long to get there.

Tales of Xillia 2 had the potential to be one of the best games in the franchise. While it hits many notes perfectly, it also gets some things terribly wrong. An excellent battle system, endearing characters, and touching ending are almost ruined by endless annoyances from loan sharks, needless grinding, and tedious legwork. Perhaps Namco Bandai would have been better served letting their ideas marinate for the next Tales iteration. Still, at the end of the day, the good outweighs the bad and Xillia 2 is a worthy purchase for fans of the first game and JRPG lovers in general. Just go in expecting to waste a lot of time. Here’s hoping Tales of Zestiria won’t be as huge a time sink.

As much a step backward as it is a step forward.