The Dark Pictures Anthology has hit its stride. 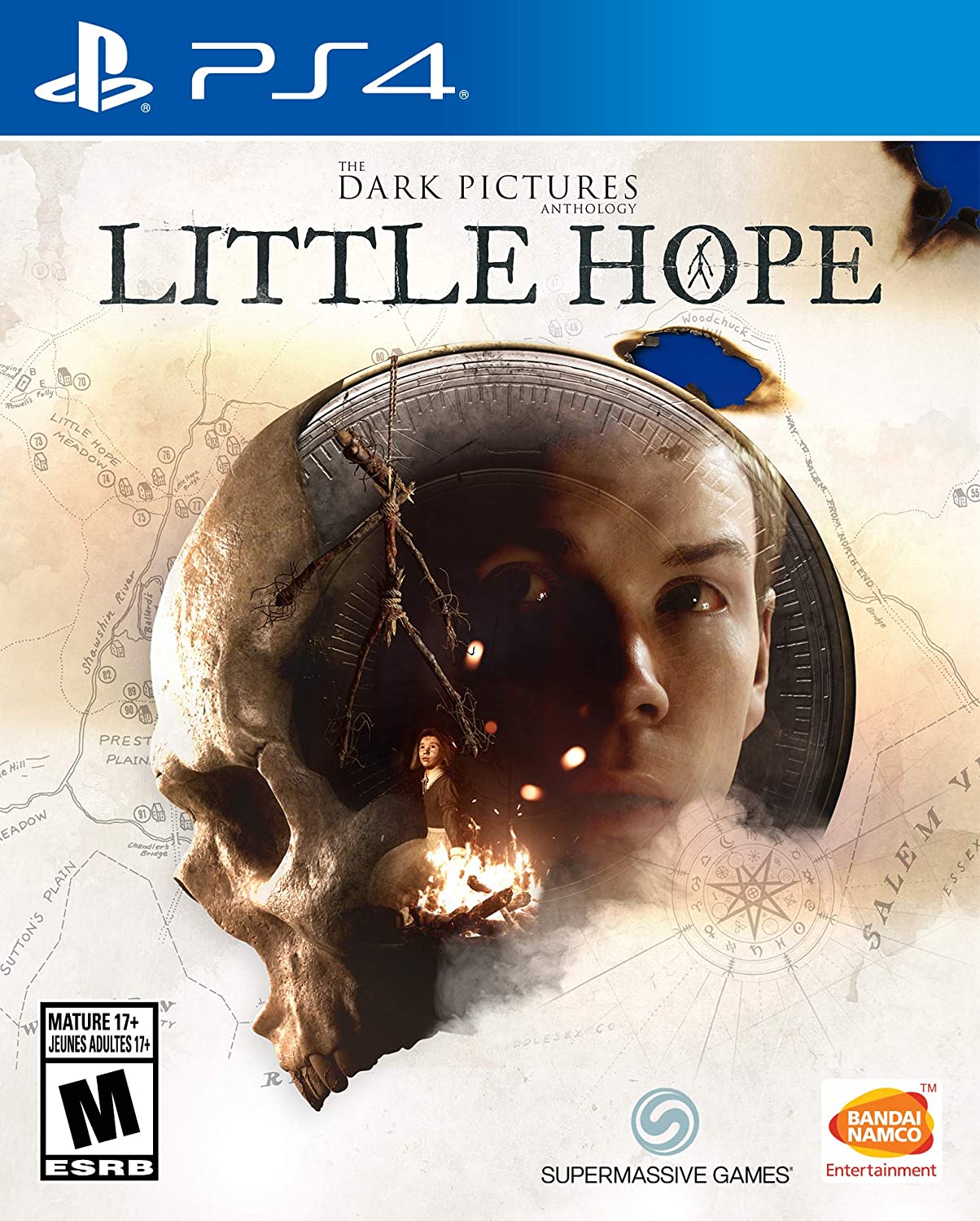 Supermassive Games had a tough act to follow with Until Dawn. Their Sony-published 2015 smash hit garnered critical and commercial success and was, in my humble opinion, one of the best examples of the narrative adventure game format pioneered by the likes of Telltale Games and Quantic Dream. A follow-up was inevitable, and Supermassive swung for the fences, announcing an ambitious multi-game anthology series of horror adventures that would walk the trail Until Dawn blazed. With the help of new publisher Bandai Namco, the company released the first part of their new Dark Pictures Anthology series, Man of Medan, to… slightly less critical and commercial success.

That’s not to say that Man of Medan was a failure by any stretch of the imagination: I liked it, at any rate. At the time, I lamented the game’s technical performance, as lag and glitches marred what was otherwise a serviceable B-movie romp. It just wasn’t as polished as it could have been, and while part of that likely had to do with the change in publisher and smaller budget, I hoped that the already-announced second game, The Dark Pictures Anthology: Little Hope, would get some more time in the oven. Well, I got my wish, albeit under dubious circumstances. Supermassive wound up briefly delaying the game due to the ongoing COVID-19 pandemic, rightly putting their team’s safety first. But now, Little Hope is here, just in time for the Halloween season, and I’m pleased to report that it is indeed a big improvement over its predecessor.

When their bus crashes on the outskirts of Little Hope, an abandoned town in middle America, a group of college students and their professor find themselves embroiled in a fight for their lives with the restless spirits of the dead. The group includes the reserved and anxious Andrew (played by Will Poulter of Black Mirror fame), headstrong Daniel and his girlfriend Taylor, an abrasive middle-aged lady named Angela, and their insecure professor John. With the roads behind them are enshrouded in an endless fog that halts their attempts to leave, the group has no choice but to confront the horrors of Little Hope’s past — which include a series of vicious witch trials that would have made Salem blush — if they want to escape with their lives.

Once again, Supermassive wears their affection for the horror genre on their sleeves: Little Hope draws more than a little inspiration from Silent Hill, The Blair Witch Project, and more. The Salem witch trials are certainly well-trod ground for the genre, but while Little Hope plays loving homage to genre tropes, it has enough of a unique spin on the concept to make for an engaging and thrilling tale. While the characters are still pretty archetypal, they’re a likeable bunch, and I enjoyed their interactions with one another. Most of the actors, brought to life with cutting-edge facial capture technology, get to flex their acting chops with dual roles in the story, playing one person in the modern day and another in the 1600s, which is interesting. At various points throughout the game, you’re greeted by The Curator, a Crypt Keeper-style “host” for The Dark Pictures Anthology played by Pip Torrens, who offers cryptic advice and commentary on the player’s progress thus far. The Curator is honestly a delight, and Torrens seems like he’s having a lot of fun with the role.

There’s also a bit more of a thematic throughline in Little Hope than in Man of Medan, which I found very interesting. The game delves into some pretty heavy subject manner, including abuse, parental neglect, and trauma. I don’t want to get into too much detail, but if you’ve played one of Supermassive’s games before, you probably have already figured that things aren’t quite as they seem. The resolution this time around is surprisingly emotional, and I found it to be very effective. Little Hope also examines the concept of a “ghost town” in more ways than one, as uncovering the game’s numerous secrets paints a picture of a once-thriving settlement that has fallen by the wayside due to economic collapse and human greed, which represents a far more insidious and realistic horror than specters of the damned. There are still plenty of those (and accompanying jumpscares) to go around; there were quite a few moments where I chuckled to myself after a sudden noise nearly made me jump out of my seat. In general, there’s a bit more to unpack here than there was with Man of Medan, and legitimate pathos to be found assuming you make the right choices.

As expected, decision-making lies at the heart of Little Hope. Just about every conversation or fork in the road will prompt the player to choose what to say or do, and these choices will have lasting repercussions throughout the narrative. Something as simple as whether or not to accept a drink, or as harrowing as choosing who to save from an attacking monster, can impact who lives or dies over the course of Little Hope. As you progress, the game will track the choices you’ve made and the relationships for each character, which you can use to chart your course, so to speak. Because of the numerous outcomes based on the player’s decisions, there’s tons of replay value. I played through the game twice for this review and was surprised to see how differently characters treated each other based on my choices, along with the way decisions even impacted a monster designs. If you’re playing online with friends, another player can make decisions for characters you’re not in control of, adding an additional layer of tension to the experience. Horror is experienced best with friends, and the online multiplayer component of Little Hope is one of its best selling points, especially in these socially distanced times.

The gameplay proper will be very familiar to Until Dawn veterans. Characters are controlled in the third person and are able to interact with various objects in the environment when prompted. Holding down one of the triggers and tilting the stick will allow characters to examine objects more closely, perhaps uncovering more information. The environments are largely linear, with a few caches of items hidden off the beaten path. Some of those hidden objects and secrets are nonetheless well-hidden, so keep an eye out for them. Whenever the action heats up, the player will be prompted to perform a timed Quick Time Event. These include pressing the prompted button within the time limit, mashing the button until a meter fills, hitting a moving targeting reticle, or pressing a button in time with a heartbeat sound effect during particularly tense moments. Overall, while the gameplay is roughly the same as its predecessors, it feels more polished than Man of Medan, where the lag often led to wrong input (at least, in my experience). Here, I had a much easier time landing those all-important QTEs. If you’re struggling, Little Hope offers a nifty suite of accessibility options, which ought to reduce the strain on those who need it.

On the technical side of things, Little Hope is a pretty sharp-looking game. The facial animation used to capture the actors’ performances looks a bit uncanny at points, but it’s still very impressive, as are the foggy streets and run-down buildings that make up the titular town. Because the game largely takes place over the course of a single night, most of the environments are dark and gloomy yet finely detailed, as are the objects you can pick up and examine. The team’s lighting work is phenomenal, particularly the firelight used in all of the scenes set in the 1600s. Jason Graves also returns to score Little Hope, and his music is suitably atmospheric, with lots of scare chords to accompany those juicy jumpscares.

While this is all well and good, I would be remiss if I didn’t mention some lingering technical hiccups. While nowhere near as bad as Man of Medan, the game did lag on me pretty severely in a couple of instances (especially in the cemetery), and I had two straight-up crashes: one on each playthrough. I also had at least one instance where the game wouldn’t let me re-examine an object after I accidentally put it down, potentially preventing me from uncovering a secret. Since I played a pre-release build of the game, I’m hoping that these issues will be addressed in future updates, but it’s worth noting.

All things considered, I enjoyed my time with Little Hope. While still marred by some unfortunate technical issues, it is a more polished and engaging experience than the first game and the perfect way to spend a dark and spooky night (with friends if you can manage it!). With this game, The Dark Pictures Anthology has hit its stride, and I can’t wait to see what Supermassive Games has in store for us next.

The second installment of The Dark Pictures Anthology is a big improvement over the first.