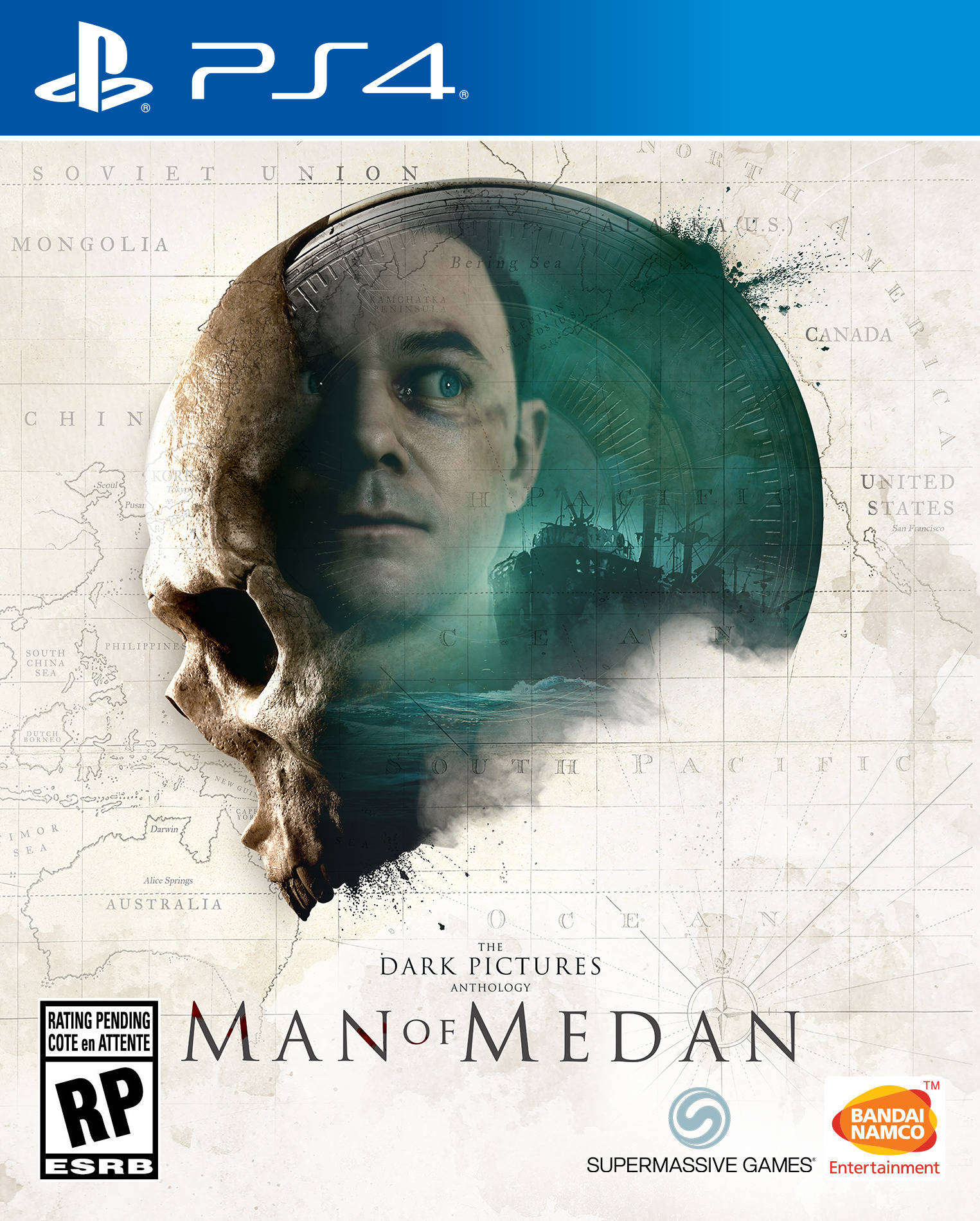 The concept of the anthology series is nothing new for horror aficionados. Serialized short stories have been a staple of the genre pretty much since its inception, whether they’re in the form of ghost stories shared around a campfire, the written word from the likes of Clive Barker and H.P. Lovecraft, or television shows like The Twilight Zone or Black Mirror. Stories told in this manner are a part of the grand tradition of horror, offering a brief, concise tale of things that go bump in the night without overstaying their welcome.

Enter Supermassive Games. The studio made waves in 2015 with their narrative adventure game Until Dawn, which took the Telltale Games/Quantic Dream formula and brought it to chilling, cutting-edge life. The game was an overnight sensation, and fans have been clamoring for a bona fide follow-up ever since. That time has finally come with the release of The Dark Pictures: Man of Medan, the first installment of a planned eight-part series under The Dark Pictures Anthology banner. But does Man of Medan live up to its storied pedigree? The short answer is yes, but with some caveats.

Man of Medan is a nautical-themed horror story based on the real-life legend of the S.S. Ourang Medan, and it also draws inspiration from such films as Ghost Ship and John Carpenter’s The Fog. The story follows a group of young adults on a diving expedition in the South Pacific: Conrad (played by Shawn Ashmore, A.K.A. Iceman from the X-Men films), his sister Julia, her boyfriend Alex and his brother Brad, and Fliss, the captain of their boat, the Duke of Milan. Things take a turn for the worse when Conrad antagonizes a group of local fishermen, who show up later that night intending to kidnap and rob the hapless youths. When the Duke of Milan is caught up in a storm, the group and their kidnappers find themselves stranded on board the titular derelict freighter, which appears to be completely abandoned. The group has no choice but to contend with the horrors left onboard the ship and unravel its many secrets if they want to escape with their lives.

Intermittently, the player will be greeted by the mysterious Curator, a Crypt Keeper-esque character who serves as a kind of host for The Dark Pictures games. Played by veteran actor Pip Torrens, the Curator will occasionally offer cryptic advice about how to proceed through the game, as well as gauge the player’s progress. It’s a fun performance that lends authenticity to the game’s horror anthology setup, offering a neat framing device and a reprieve from the paranormal goings-on on board the Medan.

Overall, the story is Man of Medan’s strongest aspect. Like Until Dawn before it, the game captures the tone and feeling of playing through a B-movie with aplomb. The main cast of characters are largely likable and deliver solid performances, particularly Shawn Ashmore’s Conrad and Ayisha Issa’s Fliss. There’s a lot of corny dialogue and the characters themselves are very archetypical for the genre, but that’s pretty much in keeping with the kind of stories Man of Medan is cribbing from. There is a twist to the proceedings late in the game, and it’s handled pretty well, with clever set-up and execution. If I had one gripe about the story, it would be that the conclusion seemed a little rushed and anticlimactic: although, who knows, that could be because of the choices I made to get there.

Choice is the name of the game in Man of Medan. As players progress through the story, they are greeted with various binary choices, just like in Until Dawn. These can range from mundane interactions (like Brad choosing to drink beer with Conrad) to monumental decisions (whether or not to save someone’s life), but all of them affect the story in some capacity. There are a lot of decision points and branching paths through Man of Medan’s relatively short run time, offering tremendous replay value. How different characters feel about one another, who lives or dies, and even who comes along on the journey to begin with is all up to the player. Uncovering a major decision branch opens up a “bearing” in the game’s menu, which updates with new information as you progress: again, this is a lot like the Butterfly Effect moments from Until Dawn, although there are fewer major variations in Man of Medan (eight in total).

There are also pictures the player can find, which function identically to the Totem system from Until Dawn. Finding one of them will unlock a brief premonition of the future, providing some context that may help the player make decisions. Unlike the totems, there are only two kinds of pictures, with white frames or black frames indicating the kind of information the premonition will convey. The pictures can be helpful, but depending on the context, they can also be a little misleading: one scenario led me to believe that a non-player character’s death was unavoidable, when it turns out that choosing the right dialogue options at a critical juncture can actually save them. Your mileage may vary on how useful you find these photos, but they’re worth seeking out.

Outside of decision-making and frequent quick-time events, Man of Medan offers precious little else in terms of gameplay. The control scheme is largely the same here as it was in Supermassive’s 2015 opus: move with the left stick, grab and interact with objects with R2 and the right stick, hold L1 to walk ever so slightly faster… it’s all very familiar. Walking through the cramped, claustrophobic corridors of the ship is appropriately moody and atmospheric, but controlling the characters themselves is kind of unwieldy. They have some heft and weight to their movement, often barrelling past button prompts and narrow pathways before the player can stop them, which isn’t very conducive to exploration. This was true of Until Dawn, but it feels even more imprecise here and is quite frustrating. During certain sections, the party will have to hide from an enemy character: instead of the “hold the controller still” segments from the last game, players instead have to time their button presses with a heartbeat sound effect and a gauge that appears on the screen. I personally thought this was an improvement (setting the controller down was a pretty easy way to cheese these portions of Until Dawn), but again, your mileage may vary. Overall, the gameplay in Man of Medan is functional, but not much else.

More concerning are Man of Medan’s many technical issues. Supermassive switched publishers for this one: while Until Dawn had the backing of Sony, Bandai Namco is handling The Dark Pictures Anthology, and it seems that the developer probably has less of a budget to work with. The game still looks pretty good overall, with impressive motion capture technology bringing the actors’ performances to life, and the dank halls of the S.S. Ourang Medan look like they could give you tetanus if you get too close. That being said, the fact that Man of Medan doesn’t look appreciably better than a game from 2015 is a little disheartening. Worse still, slowdown and lag permeate the entire experience, especially while loading between scenes. Textures pop into existence a few seconds after cutscenes begin, and the lag can make some of the game’s myriad QTEs harder to pull off. I also had at least one crash after a major character death, forcing me to rewatch their grisly fate once I reloaded my save. Additionally, the subtitles became desynced with the game audio in a couple instances, which was just kind of awkward. None of these issues are game-breaking in and of themselves, but they add up over time and inhibit the intended experience. Hopefully, future installments in The Dark Pictures Anthology get a little more technical polish.

On a more positive note, Man of Medan comes with two unique multiplayer modes, offering ways for friends to share in the thrills and chills. Shared Story mode lets multiple players play online together, each making decisions for different characters. I didn’t get a chance to try this out myself, but I did do a co-op run with my partner through Movie Night mode, where two or more players select which characters they want to control, and then pass the controller around when it’s their turn. This is a lot of fun, and really adds to the horror movie vibe Man of Medan has going for it. After all, there’s no better way to watch a cheesy B-movie than with friends.

Overall, Man of Medan is a promising, if flawed, introduction to The Dark Pictures universe. Supermassive clearly intends to kickstart a franchise with this one: the second installment, Little Hope, has already been announced for early 2020, and the Curator’s repository is filled with portraits of different spooky incidents rife with storytelling potential. I’m definitely down for more horror adventures from Supermassive, but I hope that the next one gets some much-needed optimization before it hits store shelves.

A solid enough follow-up to Until Dawn, with the promise of more to come; hopefully, they iron out a few kinks next time.