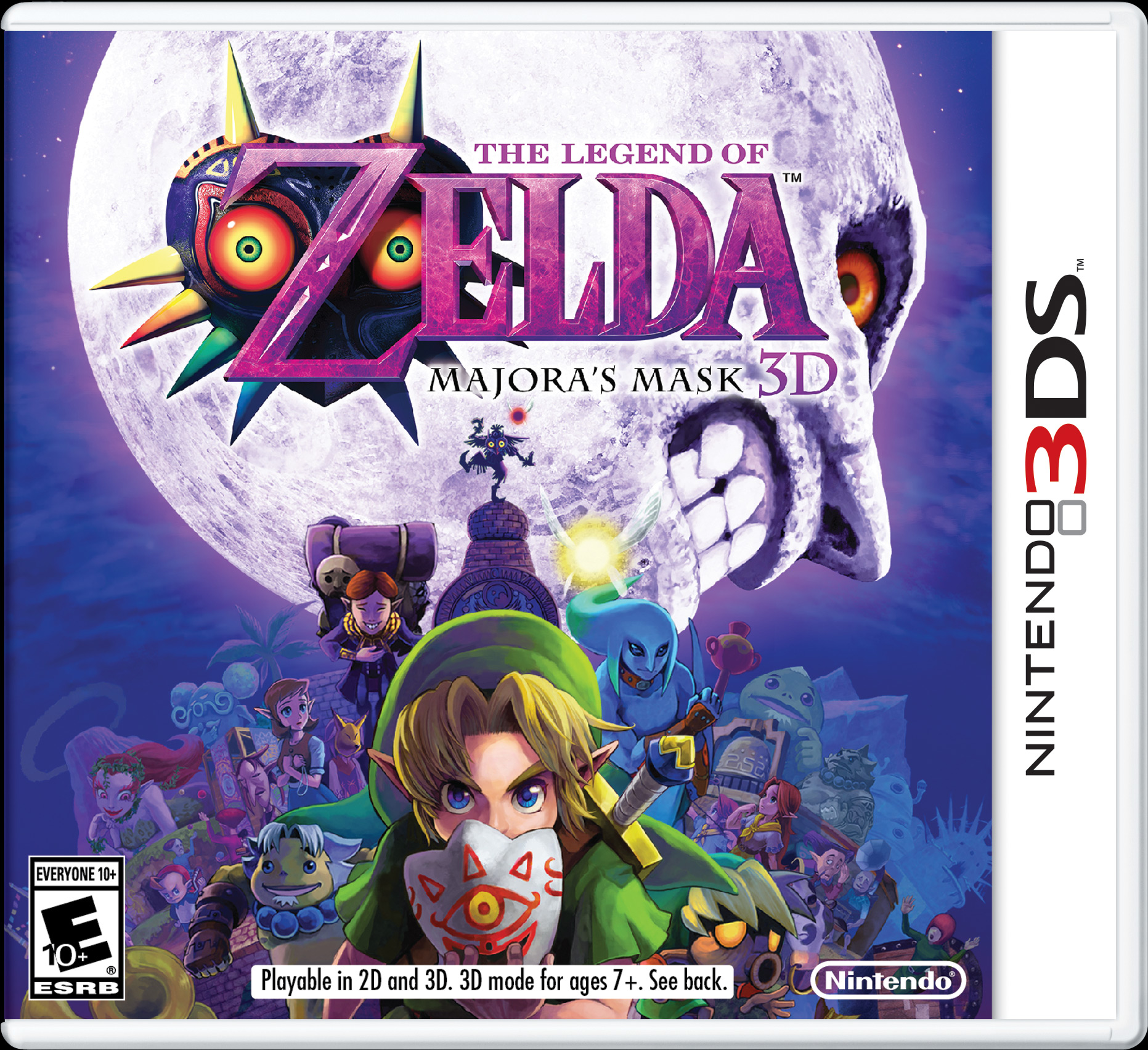 The moon is falling. In 3 days, the world will end.

Set shortly after the events of Ocarina of Time, Majora’s Mask 3D begins with Link searching for a lost friend. Ambushed by a Skull Kid in possession of the insidious Majora’s Mask, Link is relieved of all his equipment and cursed into the form of a Deku Shrub. Stuck in a foreign land, Link discovers he has only 3 days to put a stop to Majora’s Mask or the moon will fall and Termina will be destroyed; a virtually impossible task. Fortunately, with the power of the Ocarina of Time, Link can return to the beginning of his first day in Termina over and over again.

Majora’s Mask is not your average Legend of Zelda game. The typically bright, adventurous atmosphere the series is known for is replaced by something darker and more foreboding. In other games, you’re always aware a villain is causing trouble, but they never quite loom in your vision like a giant moon with a creepy face does. Heroism, coming-of-age, high adventure, and friendship are foreign terms to Majora’s Mask. Calamity, death, futility and fatalism are far more appropriate words.

As you may have guessed, masks are a key component of the game. Of course there’s Majora’s Mask itself, but there are 24 more of them for Link to acquire and wear. Each has its own special power such as increasing run speed, speaking with animals, calling fairies, teaching Link to dance, and all sorts of other bizarre abilities. It’s a pity so many of them only have a single use in the whole game. On the other end of the scale, there are 3 transformation masks used throughout the game that can turn Link into a Deku Shrub, Goron, or Zora. Aside from the usual stash of equipment such as the hookshot, bow, bombs, and so forth, the transformation masks are vital in progressing through the story. As a Deku Shrub, Link can burrow into flowers, then pop out and fly; as a Goron, he can roll around at high speed and cross lava; and as a Zora, he can swim swiftly through the waves and breathe underwater. You get different reactions from most NPCs depending on what you look like, and some people are only cooperative based on your appearance.

Though the game is centred on an unconventional story and atmosphere, the core gameplay of the series remains in place. Four dungeons, plus a finale, are the primary goals that you must overcome. They’re not terrible interesting, though, particularly if you’ve just come off the excellent dungeon design of Ocarina of Time 3D. The third dungeon, Great Bay Temple, is a particular horror. It’s difficult to know where you’re going, there’s lots of backtracking, and there are currents of water frequently pulling you where you don’t want to go. Happily, the fourth dungeon is far more original, with a mechanic that literally lets you turn the entire dungeon on its head. The bosses are a delight, notably one who you chase down by rolling behind it as a Goron.

Each dungeon resides in its own locale: swamplands, a snowy mountain, the ocean, and the top of a canyon. The varied environments have you skip over poison water, roll up steep slopes, swim through currents and launch off cliffs. Unfortunately, the area layouts feel a bit jumbled, so navigating from place to place is a chore. After defeating the boss, some locations go through wonderful transformations such as winter melting away for spring. As nice as those are to see, though, it’s a real pity that the last two areas change very little, and the excitement is sucked away when you go back to the beginning of the 3 days and all is dark and gloomy again.

Unfortunately, and perhaps ironically, time is one of Majora’s Mask’s core issues. The majority of your triumphs are simply reversed when you inevitably wind back the clock to start at day 1 again. Sure, you can go back and beat the boss again, or clear a mini-game for a second time, and the game makes it easy to do these quickly a second time around, but it does suck some of the fun from the experience. The futility of your victories suits the theme of the game well, but it’s frustrating and disheartening when you have to repeat a challenge for a second, third, fourth or even fifth time. There’s plenty of content that’s only available after defeating a dungeon, but due to the 3 day timer there’s only so much you can fit in. The Songs of Inverted and Double Time allow you to slow down time or jump forward to a particular hour, respectively, but they only alleviate the problem, rather than resolving it.

Aside from the primary story content, Majora’s Mask packs in significantly more side-quests and additional content than any other entry in the series. In fact, the highlight of the game is the dozens of NPCs who inhabit the world and the crazy schedules they follow across the 3 days. It’s fun to chat with them, follow them, mess with the events that surround them, and reap the rewards, particularly the denizens of Clock Town. Nearly every NPC in the town is linked to a side-quest you can explore; some tasks are over and done in minutes while others span the entire 3 days. Keeping track of them is easier than ever too, with an improved Bombers’ Notebook that tracks your progress and their schedules. Their dialogue and worries change as time passes, and in the final few hours before the moon crashes, you see the sort of people they truly are, whether they be the brave guards who stay behind, knees shaking, or the tough sword instructor who actually decides to flee. Whether it’s reuniting a pair of lovers, stopping a thief, helping the postman train, or casually delivering toilet paper, Clock Town is brimming with believable, interesting characters with their own individual troubles and motivations. It’s just sad the rest of Termina isn’t as interesting.

As you can see from the screenshots, the visual upgrades are gorgeous. Built on the same engine as Ocarina of Time 3D, Majora’s Mask 3D features outstanding visual improvements that bring Termina to life like never before. Link looks wonderful; his facial expressions are detailed and his animations smooth. The lighting isn’t quite as dark in the original though, and the game feels slightly brighter. Still, the smoother models and crisper textures are a joy to look at. The music is improved in quality, but otherwise the same as it always was. There are a few excellent tunes such as the sombre Oath to Order or the hauntingly calm Song of Healing, but others, such as the New Wave Bossa Nova, are just as uninspired as they always were. Environmental music tends to be quite soft and unremarkable, aside from the perky Clock Town tune.

Just as in its remade counterpart, Majora’s Mask 3D features a number of subtle changes to core gameplay for a smoother, and sometimes easier, experience. Unlike the original Nintendo 64 release, returning to the start of the first day no longer saves the game. Instead, your game can only be saved at owl statues or brand new save statues spread throughout Termina. I appreciate this addition, as it suits the nature of a portable title. The HUD and inventory have been overhauled and moved to the bottom screen, and now equipping items is as simple as dragging them to their respective buttons. The game even supports the Circle Pad Pro for camera movement if you wish to use it. There are dozens of other minor changes too, such as a modified South Clock Town, new animations, some Stray Fairies, heart pieces moved and so on.

There are a few changes, however, that may irk series veterans. There are now two fishing holes where you can sit back, forget your worries, and reel in some fish for no particular reason; they’re ludicrously superfluous additions. Like in Ocarina of Time 3D, there’s now a Shiekah Stone that can provide hints on how to solve puzzles if you need assistance. Swimming as a Zora has changed dramatically, and for the worse. Swimming at full speed now drains your magic meter, though a new slower speed makes navigating small areas of water far easier. Each boss now has more obvious weak spots too, and I found these made battles less frustrating. Though some of these are slight annoyances, Majora’s Mask 3D is ultimately a vast improvement over the original.

If you’ve never played Majora’s Mask, then this is the time to jump into Termina and stop the moon from falling. It’s a fun, engaging adventure held back only a little by too much repetition and back-tracking. Masks are a great addition to the series that add a unique charm, and learning about all the different NPCs that inhabit the world is an unforgettable experience. While the dungeon design may not be among the series best, there’s few reasons why Majora’s Mask 3D isn’t worth a play.

Majora's Mask 3D is a game worth experiencing, even just for its bizarre and unsettling themes. However, while enjoyable, it's not among the best the Zelda series has to offer.