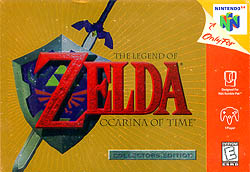 This is possibly the hardest review I have ever written. Ocarina of Time is one of my favourite games and had I been writing this when it first came out, it would receive a perfect score. Having said that, this is more than a decade after its release and this review is for the Virtual Console version. With that in mind, I compared the game to recent games so you know where you should spend your hard-earned cash. But to all you Zelda fans out there, I want to let you know I’m crying on the inside that the score doesn’t read 100%.

As an aside, if you’re primarily interested in the differences between this release and the original, just scroll down to the last couple of paragraphs.

It is a dark and stormy night in the kingdom of Hyrule. A young boy in green cloth stares at the mighty walls of a castle before him. As the drawbridge slowly lowers, a young girl in royal garments rides forth on a snow-white horse. Link sees from the look of horror in her eyes that she needs his help. Moments later, a red-headed man on a dark horse emerges from the gate. The man slows his horse and scoffs. The boy draws his small sword, ready to fight. The evil man, named Ganondorf, simply laughs before unleashing a powerful magic. Just as he takes the blow, Link wakes up in his bed in Kokiri Forest. Was it simply a dream, or a foretelling of the future? Ocarina of Time tells the classic story of good versus evil as Link, the boy without a fairy, sets out to save the land of Hyrule from the evil Ganondorf. The story is interesting, compelling and filled with a cast of likable and interesting characters. Although not nearly as complex as some of the more recent epic RPGs, Ocarina of Time tells its story well enough to keep you committed to the plight of Hyrule the entire way through, including an excellent twist right near the end. Just don’t expect any character development or quality dialogue on the part of the silent protagonist.

The game is primarily split into two segments. The first half is Link’s journey as a child. During this part, under the guidance of Princess Zelda, his goal is to collect the three spiritual stones from the various races that inhabit Hyrule and claim the legendary Triforce. The second half takes place seven years in the future with Link as an adult. He has access to a whole new range of equipment and must find the seven sages to help him put a stop to a great evil. Both parts are primarily centred on overworld exploration coupled with the occasional dungeon. These dungeons show off some of the best game design around and feature a terrific mix of battling enemies and solving puzzles. The challenges are rarely fiendish in their difficulty, but usually hard enough to make you step back and ponder the situation. In each dungeon you’ll find a special piece of equipment. This item is used to reach places previously inaccessible or defeat enemies against which Link had no chance before. You’ll come across a bow, dangerously explosive bombs, a lens that allows you to see invisible objects and boots that allow Link to float through air, just to name a few. These items continually aid in keeping the overworld fresh as well. You’ll find yourself constantly wondering, “Hmm, now that I have this new item, I wonder what new secrets I can find with it?” Ocarina of Time rewards players who want to explore as there are a plethora of secrets to discover and hidden items to find.

The overworld is primarily connected by a large area known as Hyrule Field. From here you have access to a large lake (complete with fishing), a castle town, a forest, a winding river, a village at the foot of a mountain, a deep canyon, and a ranch. It’s this diversity in environments that makes the world so wonderful to explore. Back in its day, it was huge. Few games before, especially in 3D, had presented such a large and intricate world. Luckily, Link receives a horse later on which makes travelling this land far easier. There are also a number of fun mini-games and sidequests to partake in when you want a break from the main story. These include fishing, chicken wrangling, ghost catching, digging in graveyards, a challenging training grounds and, my favourite, horseback archery. Completing these always gives you a useful reward, whether it is a health upgrade, a larger capacity for arrows or bombs, special item, or just a big wad of rupees (Yay! Money!). On top of these there are plenty of collectibles to locate. Spread throughout the world are thirty-six heart pieces (used to increase your health capacity), ten magic bean spots, ten large poe ghosts, and one-hundred gold skulltulas. Locating all these can be a huge and lengthy task, but all have equally suitable rewards.

Apart from the puzzle solving and exploration aspects, Ocarina of Time has a heavy focus on combat. More often than not, this is Link fighting with his sword and shield against whatever foe he encounters. You can lock onto an enemy and strafe around them and perform moves such as sidestepping, back flipping and rolling to avoid the foe. The targeting system works perfectly and always allows Link to keep your target in his sights. Attacking with a press of a button is simple, but enemies are rarely so easily defeated. Most have some specific weakness for you to discover. Wolfos, for example, tend to block your attacks when you come at them from the front. But roll around behind them, and they have no chance. Even simple Deku Shrubs, who hide underground when Link gets too close, must be dispatched cleverly by using his shield. Some enemies are killed more easily with specific pieces of equipment or even drop different items depending on how you do it. This helps keep combat interesting and fresh until the end.

Around a third of the way through the game Link obtains the power to move through time. Using a special pedestal Link can travel backward and forward seven years. By visiting this pedestal at any time, you can swap between a younger Link and an adult one. The land of Hyrule massively changes in these two time periods and there are plenty of different people and things to find in each period. Young and adult Link are also limited in what equipment they can use. Adult Link, for example, can’t use the boomerang or slingshot, whereas young Link can’t use a bow or hookshot. This means certain locations are only accessible in one time period. There are a couple puzzles in the game where Link has to affect the world as a child before he can come back and finish solving it as an adult or vice-versa. It makes for some great moments and exciting experiences. One particular instance of this, that takes place during the main story, is gaining entrance to the Spirit Temple. Only a small tunnel leads into the building and adult Link has no chance of fitting through. You first have to reach the temple using adult Link, crawl through the tunnel and grab a useful item about half-way through the temple as young Link, and then use this item, as adult Link, to enter the central part of the building.

One of the key items in the game, as you may have guessed from the title, is the Ocarina. This magical musical instrument holds a variety of different powers depending on what tune Link plays on it, and he will learn plenty of different songs throughout the game. One can change it from day to night, another can call down a storm, teleport Link across the world, and even call his horse to his side. This is a great addition to the game and many of the songs have dual-purposes not initially obvious. All these tunes are fantastic and very catchy as well. From the subtle beauty of Minuet of the Forest to the power behind the Bolero of Fire, each song reflects something about the world presented in the game and sounds great doing it. The background tracks are equally wonderful. Each area has its own distinct music and each one is spot-on. They really draw you into the world and give you a feel for the different cultures of each location. Sound effects are great too. The whoosh of Links sword swiping through the air and the explosion of a bomb as he throws one really adds to the immersion. And, for the more sadistic players, the sound of Link slamming to the ground after throwing him off a cliff is pretty good too.

Graphically, the game still holds up well. Sure, the textures are not even comparable in detail to recent releases, and you can see pointy polygons poking out here and there, but it doesn’t take away from the experience at all. The world is still just as vibrant and wonderful as it was when the game was first released. You’ll feel the same sense of awe as you scale Death Mountain and the same wonder as you ride across Hyrule Field. It definitely says something for the quality of a game when, thirteen years later, the graphics still stand up well enough to modern releases. That being said, don’t expect anywhere near the quality you see in Twilight Princess.

There are no differences between the original Nintendo 64 release and the one on the Virtual Console. It’s exactly the same game as you remember all those years ago. However, because of this, the interface hasn’t changed to reflect the new controllers either. This re-release can be played with either the Wii Classic Controller or the GameCube one. Both function just as well, if not better, than the original Nintendo 64 one. Unfortunately, because the buttons displayed on the screen still match the original controller they show the A, B and C Buttons rather than the updated analogues. It’s not a major issue, but it may take new players a little longer to adjust. The upside is that if you never had the Rumble Pack for your Nintendo 64 and missed out on some of the hidden bombing locations, the features are now built into either the classic or GameCube controllers!

If you’ve never played Ocarina of Time before then it’s definitely worth putting out the forgettable cost of 1,000 Wii points to buy. It’s an extremely enjoyable and hugely fun game to play, and has a considerable selection of tasks to complete and hidden locations to explore. Plus, this is one of the greatest, if not the greatest game of all time. If you consider yourself a gamer, then this is a title not to be missed. If you’ve played a previous release then there’s no doubt you’ll enjoy stepping into the unchanged land of Hyrule once again. If you’re someone who isn’t fussed by an older game, with graphics now lacking in detail and a story not quite as epic as modern games, then disregard the score at the side of this review. This one is perfect.