The World Ends With You -Solo Remix-

Those who haven't yet played TWEWY, or want to replay the game with updated music and graphics shouldn't be deterred from doing so, but always remember the philosophy of caveat emptor – let the buyer beware. 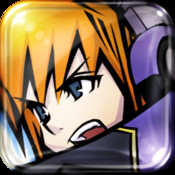 With Square Enix being the proverbial Hollywood of the Japanese game industry, the rare moment when they interrupt their ridiculous sequels and cash-ins with honest-to-goodness original properties is something that definitely piques the interest of even the most cynical gaming enthusiasts. The World Ends With You for the DS was one such title, and, while it wasn’t perfect, it was a breath of fresh air during a period in which Square Enix had little to offer other than Final Fantasy and Kingdom Hearts spin offs and rehashes. Recently, Square Enix ported The World Ends With You (hereafter referred to as TWEWY) to the iOS platform with updated visuals and music.

The World Ends With You begins with main character Neku waking up in the middle of the crowded Shibuya shopping district in Tokyo, Japan. He is disoriented, incorporeal to the people of Shibuya, and stripped of his memory, and his confusion is aggravated by the fact that he is soon attacked by strange creatures called Noise. While escaping from the Noise, he is approached by a young girl who demands he make a “pact” with her in order to fight them off. The two are able to triumph, and Neku soon finds out that he’s already dead and that he is now the participant of a game that determines who is worthy of a second chance at life and who isn’t; those that survive seven days of the game can return to life, and those who can’t cease to exist.

The music is a large part of why TWEWY stands as a unique game; it’s inspired by a diverse number of genres, from rock to pop to electronica. Takehru Ishimoto definitely has a gift, and while it can be an acquired taste for some, the soundtrack is unique, varied, and a genuine pleasure to listen to – this kind of talent is hard to find nowadays, and more in this vein of music from Ishimoto would definitely be a huge plus for future games from Square Enix. It should be noted that the iPad version’s music is completely uncompressed, so audio quality is incredible, though this means that the 580 MB claim the game makes in the App Store is wildly inaccurate – it is actually 2.3 GB, which means that it won’t be long before it becomes unwelcome on my 16 GB iPad.

The graphics received a major overhaul for its shift to the iOS. The backgrounds, sprites, and artwork are all much higher resolution now, and while I’ve never been a fan of Tetsuya Nomura’s character designs, the style and art fit the game extremely well and are actually inspired, with a diverse ensemble of different fashions and clothing designs rather than the endless zippers and belts we seem to see in more recent Final Fantasy and Kingdom Hearts games. On the topic of graphics, however, the game is advertised as being optimized for retina display, which is patently false. Having downloaded it on my third-generation iPad, the game sprites are blocky, the DS icons are still in place (and so only barely resemble what they’re supposed to), and the cutscenes and backgrounds are grainy. While it’s understandable – even defensible – that Square Enix couldn’t take the DS version and upscale it 1:1 onto iOS devices, describing the game as being optimized for retina display when it clearly is not is nothing short of false advertisement. It’s possible that this claim is true for the iPhone, but for the iPad it is not.

Speaking of the iPhone, Square Enix also did not allow universal app compatibility for the iPad and iPhone versions of the game, which is as confusing as it is ridiculous. If one wants the game on both his iPad and iPhone, he has to buy the game from the App Store twice, essentially doubling the cost of the game in one fell swoop. There is no reason for this game not to have universal compatibility.

The game’s battle system is fast paced and well designed. Players control Neku’s movements by placing a finger on his sprite and attack using one of the various pins Neku has equipped; these pins have varying attributes and abilities, each activated in a different way. One pin may require the player to swipe his finger across Neku in the direction he wishes to fire bullets, another may require tapping the enemy to unleash a barrage of piercing jabs, and yet another may require shaking the device in order to cause an earthquake that stuns enemies. While Neku starts out with pins that require the most fundamental actions and he only has three slots to equip pins in, as the game progresses Neku can equip more pins and collect an arsenal with myriad abilities. Neku also befriends different partners that aid him in battle during the course of the game, and each partner assists in a method similar to a pin: one partner may require tapping the enemy, while another needs the player to hold their finger on the target to keep attacking, a large departure from the multitasking in the DS version, where the partner was controlled on the top screen by the directional pad and face buttons and Neku was controlled by the touch pad on the bottom screen.

What this means for the iOS version is that synchronizing with a partner requires more than just a firm grasp of multitasking. Attacking an enemy targeted by Neku’s partner increases damage as well as the partner’s sync bar, which can be used in devastating team attacks when it reaches a certain threshold. This means that Neku’s equipped pins need to gel well with the character he’s currently partnered up with. If his partner is activated by tapping an enemy, Neku’s pins should also utilize that activation motion, otherwise it becomes an incredible challenge to maintain both characters’ attacks. It makes for some incredibly fun and challenging battles, especially on higher difficulty settings, which force players to dodge enemy attacks and use the most efficient methods possible to dispatch enemies. Unfortunately, the downfall of such a battle system is that invariably players will end up with two or more pins in their slots that have the same activation motions, and the game seems to pick which one is activated at random. The “sub” system – where players allocate certain pins as a sub-group that can only be activated when an appropriate area of the screen is pressed in conjunction with their activation requirement – alleviates this somewhat, but it still remains a rather poignant problem in the more difficult fights, where a split second can mean the difference between victory and starting the fight from scratch.

Outside of battle, Neku and his partners can equip clothes and eat food in order to increase their attributes. Clothing offers stat bonuses only while equipped, with each piece having unique bonuses depending on the wearer, while food offers permanent increases once they’re digested after a certain number of battles. Pins and clothing also belong to different brands, and using them consistently affects trends within Shibuya, granting stat bonuses if the pins and clothing the player equips are the leading trends, while penalizing trends that aren’t as popular. Pins themselves gain PP, which increases their level and makes them more efficient. There are three different types of PP and certain pins can evolve into stronger or more efficient pins depending on the ratio of the each kind of PP. Unfortunately, Square Enix seems to have crippled the Mingle PP system by making it impossible to gain Mingle PP unless the player connects to another copy of TWEWY. In the DS version, Mingle PP could be gained from chance encounters with “aliens” in the single player game if another DS or game was not available, but this has been removed.

Exploration of Shibuya is also incredibly important, both in terms of story progression as well as finding new shops to buy different clothes and pins – oftentimes, however, Neku finds himself blocked off by certain areas. To move beyond such barriers, he is required to perform certain tasks. Different areas of Shibuya also have different Noise to fight, and each Noise drops different rewards at different rates depending on various factors, so exploration and constant battling is an important part of TWEWY.

TWEWY offers a moderate length journey, clocking in at 20 hours for the plot, and an additional 20 to 40 if one tackles the side content. The game’s difficulty has decreased considerably on the iOS, however; it could be the different mechanics for partner control, or a possible decrease in enemy strength, or any number of other factors, but comparing it to the DS version, there’s no question that the difficulty offers a lot of breathing room now, even at the highest difficulty.

Some may bemoan the countdown that preceded this release, as well as the $20 price tag; however, it’s been hinted that the game is gauging interest for a possible sequel, and $20 is a small price to pay for such a vastly enhanced port of an already excellent game, especially since the original DS cartridge still shows no signs of dropping in price. Some of the choices made in both the presentation and the design of the port are questionable and show some of Square Enix’s disconcerting business ethics, but as a game, TWEWY is still very enjoyable and arguably a worthy purchase. Those who haven’t yet played TWEWY, or want to replay the game with updated music and graphics shouldn’t be deterred from doing so, but always remember the philosophy of caveat emptor – let the buyer beware. What is advertised isn’t always what you get.

Not optimized for retina display, some gameplay features have been neutered.

A greatly enhanced port that preserves the draw of the original, but some questionable decisions hamper the enjoyment.