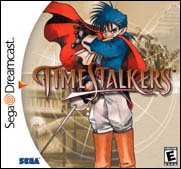 Over Sega’s past few systems, Climax has proven to be a developer capable of bringing players an excellent RPG experience. Games such as Shining in the Darkness and Landstalker have not only provided hours of entertainment to RPG fans, they have come to be regarded as some of the best games of their time. Therefore, it comes as no surprise that Time Stalkers (Climax Landers in Japan), Climax’s first effort on the Dreamcast, was met with a healthy amount of anticipation upon its release. What is surprising, however, is the nearly unmitigated disaster that the game turns out to be.

Time Stalkers stars Sword, a meandering, indifferent warrior who is pretty much just wandering through a forest one night when he is attacked by a knight in mysterious armor. Sword is able to fend off the knight, who flees after his first series of attacks are unsuccessful. Our hero, angered by the unprovoked attack, elects to pursue the escaping knight.

Sword’s chase takes him through the forest to the base of a gigantic clock tower. Assuming that the cowardly knight has entered the ominous structure, our protagonist steps through the front door. And he’s right; his assailant sees him from a staircase inside and flees again.

While seeking out the elusive assassin in the tower, Sword finds a room that contains nothing unusual other than a curiously distinct open book. Going over to inspect the book, he finds himself suddenly engulfed in a bright white light before falling to the floor unconscious.

When Sword awakens, he finds that daylight is radiating through the windows of the room, so he realizes that he was out for a while. Even more surprisingly, Sword finds that the path that he came from is blocked by a wall, as if it never existed. With no option other than to continue onward, he begins to make his way through the many floors of the tower.

After fighting his way through the mysterious structure, Sword finally reaches an exit. As he leaves, he finds himself in a bizarre town composed of small slabs of land, all wildly varied in their level of technology and civilization, juxtaposed together. Greeting Sword is an enigmatic old man named Master, who welcomes him and gives him the vague message that it is his destiny to protect this world.

Unfortunately for Time Stalkers (and owners of the game), this dubious prologue is the highlight of the game’s storyline. Sword’s quest pretty much consists solely of wandering around town until you find a dungeon to enter, clearing the dungeon, and then wandering around town again until you find a new dungeon to clear. There’s virtually no plot progression throughout the course of the game, and the one plot twist that it contains does nothing except trivialize the entire quest, making it seem like a bad dream (until you check your wallet, that is).

From a character-based standpoint, Time Stalkers’ storyline does just as poorly. Although the main characters do at least display primary personality traits, there is almost no depth or appeal to their personalities. As a result, you don’t really care whether any of them makes it through the quest when you play.

Perhaps the only passable aspect of the storyline is Sega of America’s translation job. Time Stalkers’ text does a good job of minimizing spelling and grammatical errors, and it avoids being mired in pedestrian vocabulary quite well. However, the dialogue still doesn’t flow well; it’s really uneven in many places.

Time Stalkers doesn’t fare any better in the gameplay department. Climax’s newest offering features perhaps the worst gameplay design of any RPG I’ve ever played. Nearly the entirety of the game is spent crawling through convoluted randomly generated dungeons, which becomes extremely monotonous very quickly. Time Stalkers also ill-advisedly introduces satiety as a character parameter in the dungeons. Intended to add complexity and depth to the gameplay, satiety fails because food is excessively difficult to come by in the dungeons, and your characters just end up constantly being hungry.

There are multiple playable characters in Time Stalkers, but you can only play as one of them at a time. Two of the three character slots in your party can only be occupied by monsters that you capture in the dungeons, which have varying but generally low levels of utility.

Time Stalkers also annoys by resetting the experience levels of all of your characters and monsters back to 1 every time you leave a dungeon. Although your characters do retain some of their gains, such as titles and skills, permanently, I still felt like my exploration and battles were a colossal waste of time every time this happened.

The save system is a nuisance, too. Outside of dungeons, it’s fine; Time Stalkers saves games like any other RPG. But inside the dungeons, Time Stalkers only allows you to save when you are about to quit, and when you begin play again, the save file is erased. What this essentially boils down to is that if you die in a dungeon, even at the dungeon’s boss, you’ll have to play through the entire dungeon again, which is annoyingly tedious.

And with only 8 dungeons and one town in the entire game, Time Stalkers obviously has serious issues in terms of giving players a decent amount of area to explore. Due to its inadequate layout, the RPG is almost more like a mini-game than a full game.

Players who actually enjoy Time Stalkers may be disappointed with its length; experienced RPG players should be able to blow through this one in about 10 hours. For me, the short length was actually a plus; I was more than ready for the game to end when it finally did.

As terrible as the gameplay design is, Time Stalkers actually does a couple of things right here. For the most part, the randomly generated dungeons don’t get excessively convoluted or lengthy, so the game doesn’t get any more tedious than it already is. Also, some of the playable characters are pulled from past Climax games such as Shining in the Darkness and Landstalker, so fans who are big on nostalgia should be pleased.

Although Time Stalkers’ gameplay problems lie primarily with its design, its execution is also quite flawed. The turn-based battles are buggy; sometimes it literally takes minutes to get a battle started, because enemies often get caught (and stuck) on the corners of walls. The tile-based battle system itself also leaves a lot of room for improvement, with commands often executing sluggishly. Enemies gain initiative with annoying frequency, which drags out the already lengthy battles even further. Attacks, including magic attacks, miss with annoying frequency as well.

In addition, the difficulty balance is very poor. The majority of battles are low in challenge, but you’ll occasionally get into a battle where you’ll pretty much get wiped out no matter what you do. The bosses are insultingly weak; most of them do less damage to you than the regularly encountered enemies in the dungeons.

Although it’s no superstar in that department, Time Stalkers fares a bit better with its control. Sword and his allies can move in 8 directions, and they are reasonably responsive to the analog stick on the Dreamcast controller. The menu commands, though, including the battle menu cursor, are overtly responsive, so it’s tougher to place them than in the average RPG. The menu design is also poor; the menus are vague, making them difficult to navigate, and they offer very little information

Time Stalkers also has problems with its camera control. In the town, the camera is completely computer-controlled, and it wildly changes angles all over the place, rarely resting in an optimal viewpoint. In the dungeons, the camera rests in the more panoramic overhead view and is manually controllable, but it rotates so slowly that I almost never bothered to fiddle with it.

Graphically, Time Stalkers also fails to distinguish itself from the mediocre. The polygonal backgrounds and characters alike fail to take advantage of the considerable visual muscle of the Dreamcast. They don’t get blocky and they stay cohesive when the camera moves, but they also severely lack detail. The enemies look really lame; they’re almost as laughably bad as some of the bosses in Wild Arms 2.

The animation of the characters is unimpressive, too. It’s smooth, but the movement isn’t choreographed realistically at all. The characters look silly when they move, because their movements are excessively exaggerated.

There are some bright spots in Time Stalkers’ visuals, though. The highly stylized character designs are reminiscent of those of Shining in the Darkness and the first Shining Force game. Although some of them are excessively bizarre, most of them are appealing. Also, the spell effects are impressive, utilizing lighting effects and transparencies well.

Perhaps Time Stalkers’ biggest strength (relatively speaking, of course) is its sound department. With the exception of the pathetic cries that the wimpy bosses let out as you defeat them, the sound effects are quite full, from the clang of swords to the explosions of the more powerful spells. There is no voice acting in Time Stalkers.

The soundtrack, composed by Hiroshi Kondo and T’s Music, also fares reasonably well. Many of the songs are quite catchy, and although they’re not elite compositions, they are reasonably memorable. Although some of the ambient dungeon themes are annoying, most of the soundtrack is quite pleasant to listen to.

Also noteworthy is the sound programming used for the background music. Like most Dreamcast games, the sound quality of the music is a step above what gamers are used to on the PlayStation and Saturn. It still doesn’t reach the heights that the redbook audio of PC-Engine CD games offered, though.

With its atrocious game design, poor execution, and lackluster visuals, Time Stalkers carries the dubious distinction of being the worst game that I’ve ever reviewed. I’m a big Climax fan, and I still can’t recommend this to anyone, even Climax fanatics.