A good visual novel, but a mediocre game. 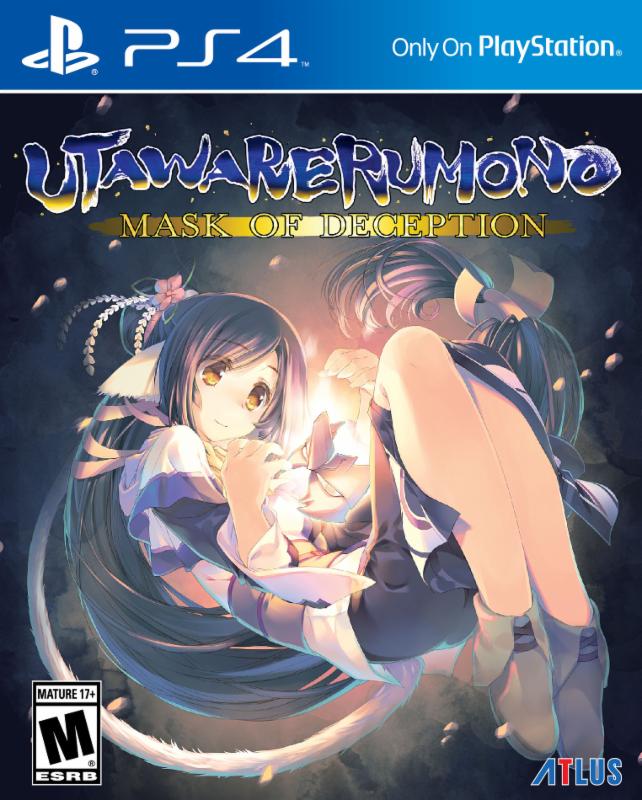 You wake up in a snowy forest with no memory of how you got there, and you are suddenly attacked by a gigantic bug with pincers that could slice you in half. When running away, you encounter a slime monster with what appears to be a human face buried inside of it. A girl with cat-like features, including ears and a tail, rescues you. What kind of world have you found yourself in? That’s what Haku, the protagonist of this game, has to contend with right away, and this is the world of Utawarerumono: Mask of Deception. This game is the second in the series and takes place after the first game (a Japanese only release back in 2002) with a new set of characters.

Kuon, the young woman interceding during the monster attack, goes on to nurse the newcomer back to health. Since the man has amnesia and can’t remember his name, Kuon names him Haku. She wants to drop off Haku somewhere during her travels where it is possible for him to make a life for himself. On their job-hunting journey, they eventually join a band of mercenaries led by a man named Ukon, who has been hired by the capital of the country, Yamato. He takes them back to the capital, where they become tied up in the country’s political machinations. It quickly becomes clear that this is a fantasy world first and foremost. You have to suspend your disbelief when playing this game, especially early on when Haku has limited knowledge. A lot of things, from the animal-like features and strength of the inhabitants to the monstrous creatures everywhere, aren’t going to make sense. It’s not you, it’s the game.

Despite the action-packed opening, this adventure starts out way too slowly, and it’s one of my main gripes with this title. The first five or so hours is just Haku and Kuon getting into shenanigans together, along with some pretty gratuitous sexually oriented fanservice. The fanservice is spread out throughout the game, but nowhere is it more annoying to have than the opening hours. There aren’t any real choices to make that affect the story either, so it’s more like playing a kinetic novel than a visual novel. This made the beginning even more difficult to get through, as the start of the game has segments from an hour to an hour and a half in length between fights that are nothing but reading. If there was at least a little bit of engagement in the form of choices to make, even if they were ultimately pointless, it would have made the beginning more bearable.

I imagine anyone with less patience than me would have probably long since given up. If you want to give this game a shot, I recommend that you either be familiar with visual novels or have a good amount of patience. After about 20 hours, the story finally gains momentum, and they begin developing the rest of the cast that you’ve encountered so far. Around the 30 hour mark is where I became truly invested in the game as the plot picked up quickly. Unfortunately, the game ends on a big cliffhanger that basically tells you to play the upcoming sequel, Utawarerumono: Mask of Truth, in September. Given the way the game ends, you can bet I’ll be doing that. There are a lot of questions left unanswered by the end of this installment, and hopefully the sequel answers them.

The tactical RPG part of the game feels like it is something tossed in to keep the player occupied, to be honest. Mission objectives are usually to beat all enemies or the boss, and defeat conditions are usually light as well, like losing all your units. Occasionally, defeat conditions involve losing one or two particular allied units, but not much else. Missions also employ an active battle system: you will need to time your attacks to do critical hits and press buttons at the right time to take less damage or buff, if you have the appropriate skills. Characters get longer action chains as they level up that do more damage or inflict status conditions. Each story fight also gives you new skills to distribute to your team as you please. You also get Battle Points (BP) to spend on units to increase stats. Doing a bit of light grinding will ensure you are always prepared for the next battle.

Unfortunately, the game does a poor job of explaining how to properly fight, and you will have to look up the tutorials provided in the glossary. If you don’t, you may not know that there is a rewind system in place which lets you rewind to any point within the last 40 moves between you and your enemies. There is also no explanation around checking out enemies’ abilities or how to reveal movement and attack ranges. Still, fights are almost insultingly easy, and even if you do get a Game Over, there’s no punishment besides starting the map over again. You keep all of the experience you earned during the battle, so you can restart over and over again to grind for levels.

Early on, it’s pretty apparent who the mainstays on your team are going to be. One of the characters, Atuy, is a very clear pick for any map, as she can wipe the map of just about all enemies if she’s supported. Kuon and Nekone can bring a character back from the brink with one heal combo, and Ougi can assassinate enemies with ease. Leaning on certain characters like these can make any map very simple and almost mindless. There isn’t much variation to the maps either; battle usually takes place in an open area with little cover. They even repeat a couple of the same maps early on, which doesn’t help. The gameplay here in general is a mess that had potential but missed the mark in its execution.

The sound department, though, is easily one of the best aspects of Mask of Deception. For those who like English dubs, you’ll probably be disappointed to learn that there is no English dub in this game. This is typical of localized Aquaplus games, and this title follows that trend. Don’t fret though; there are some good quality performances here. As an anime fan and a Japanese dub fan, I’m familiar with a few of the voice actors. Risa Taneda as Kuon is the big standout, as she absolutely nails the character. Out of the games and anime I’ve heard her in, this may be her best performance. Other voice actors who put in a great performance are: Keiji Fujiwara (Haku), Inori Minase (Nekone), and Yumi Hara (Atuy). Along with the sound, the musical score is a major highlight. The music that you find in the game can be listened to at any time from the main menu, and I found myself leaving the game on said menu awhile to listen to the great soundtrack. There are plenty of tracks for just about any situation: the lighthearted tones of “Evening Calm” (which I turned into my menu theme) and “Companionship”, the powerful and dramatic “Massacre” and “War-torn”, the melancholic “Moonlit Flower” and “Twilight of the Gods”, and the adrenaline-pumping “Akuruturuka” and “Catastrophic Battlefield”. The atmosphere was enhanced greatly by the audio, and it helped suck me into the world.

The visuals are a bit of a mixed bag. The visual novel scenes look quite good. There’s a nice variety of detailed backgrounds, even if the number of these is a bit small. When it comes time for the tactical RPG portion, that’s where the visuals slide. These look like a PS3 game (the PS4 version is probably a port of the Japanese only PS3 release), with muddy backgrounds and bland scenery. The character models use a chibi style, which contrasts with the more realistic style used for the VN scenes. It’s weird to look at the character models during the battles, then look at them in the VN style.

As a visual (kinetic) novel, Utawarerumono: Mask of Deception is quite good. It does take a long time to start, but once the story gets going, it is quite compelling. The music is fantastic, the voice acting is good, there’s a fun cast of characters, and the visuals are there. Unfortunately, as a game, it doesn’t do nearly as well. The tactical RPG part of the game lacks complexity and difficulty. The game doesn’t properly explain how the battle system works, and you will be left to fend for yourself to learn how to properly fight. If you can get over the 20 hour hump for the story to pick up, and can sit through the uninspired fights, then you can enjoy a story full of political intrigue that makes you realize how much you actually care for the characters and what they go through. However, if you are an impatient soul, and/or would prefer your games with good gameplay, stay far away. In short, this is a good visual novel, but a mediocre game.

Extremely slow and uninteresting beginning, no in-game choices to be made for a visual novel, tactical RPG portion feels like an afterthought, muddy backgrounds and textures for a PS4 game.

Utawarerumono: Mask of Deception functions well as a visual novel. Unfortunately, the rest of the game suffers, with a battle system devoid of difficulty or punishment and an agonizingly slow start. Be prepared for hours of boredom before getting to the good parts.