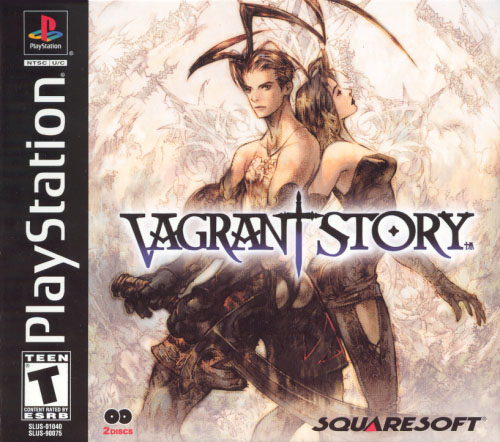 For every genre there is a leader: one that stands out from others and sets the standard through innovation and creativity. In the realm of role-playing games, Squaresoft has become a pioneer through its groundbreaking Final Fantasy titles. In addition to RPGs, the powerful and frightening survival horror, Parasite Eve, has proven Square’s ability to venture into other types of games as well. As gaming worlds collide to give birth to Action-RPGs, Square once again plants its flag in affirmation of its dominance in the industry. Thus did Vagrant Story come to be.

Unfortunately, many would-be fans were dissuaded from the get-go. The label “dungeon hack” marred the game since news of its conception and berated its name at early coverage. It is with fervent convictions that I reiterate that Vagrant Story embodies far more then a simple quest in and out of a dungeon. The game’s setting, Lea Monde, is a world in its own. Whispers of its dark history and ominous future follow both the player and Ashley Riot, the game’s hero, like wisps of fog all throughout the length of the game. There is an expansiveness to the ruins that allows the limitations of a dungeon hack to be broken, giving way to more extensive gameplay. At any moment that things become restricted, redundant, or dull, the game’s story kicks into overdrive. The player’s attention is drawn from the repetitive gameplay into an entranced interest in the plot. Things are not to be taken lightly. It is not a game to be played and then dismissed. No, in Vagrant Story it is the game that is in control and the player that must do as he/she is told.

Emphasis lies not on battling your way to victory, but in solving the dilemmas and mysteries presented to you by Lea Monde. Jumping obstacles, stacking and pushing cubes, puzzles, and the predictable enemy encounter are just a few of the game’s challenges. For when monsters and villains alike do take arms against you, an intricate battle system and a slew of combo abilities are at your disposal to crush your foes. Battle is initiated by drawing forth Ashley’s sword or weapon of choice, then activating the attack-sphere, a grid which signifies Ashley’s range and also the available portions of enemies that can be struck, such as arms, legs, torso, and head. Depending on what appendage damage is dealt to, certain affects may be doled out to the enemies, such as a decrease in movement or temporary stun. At first this double-action system, first drawing your weapon, then initiating the attack-sphere before the enemy reaches you, is difficult to gain efficient use of. Thankfully the game provides ample time to grasp the basics of the battle system and become proficient with it by setting weaker enemies and less threatening opposition at the start of the game. Things become much more difficult, though, as the story progresses, the challenge growing with the depth of the plot. For the most part, Ashley Riot reacts to the analog control fluidly and responsively, allowing the game to be enjoyed without the annoyance of unresponsive or difficultly controlled character models, which would draw away from the overall experience. It becomes essential, later, to learn how to easily maneuver between the offense and defense of battle, rushing in for the attack and leaping away to evade taking damage. Battling also takes a turn towards intricacy, as later in the game combo moves become available that strengthen Ashley and allow him to deal additional forms of damage to an opponent through triggering a sequence of buttons. All in all, battling is fairly simple and reminiscent to Parasite Eve’s with a lemon twist.

Despite the game’s attractive battle system and graceful controls, it regrettably suffers deeply from a sense of repetition, sifting constantly from solving puzzles and moving objects into battling. If it weren’t for the truly gripping the story, the game may have been a disastrous failure. When broken down, each aspect of gameplay hardly can stand on its own, but when tied together as well as they have been, the game’s problematic aspects are redeemed.

By today’s standards, Vagrant Story is in no means a “beautiful” game. At the time of its release during PSOne’s prime, Vagrant Story’s character models were very realistic and noteworthy in their detail. Although suffering from blatant pixelation when up close, the texturing and polygon count is abused far less then in previous Square titles, such as Final Fantasy VIII. Hair, skin, facial features, and accessories are all animated meticulously, not laid on too thick. The game’s color palette is less than diverse; most colors used being dark browns and grays, black, and other neutral colors. This is done in order represent the tomb-like environment that is Lea Monde. Finely detailed markings and items are speckled throughout the dungeon, with a wide range of shades to compensate for the lack of color diversity. For Vagrant Story, darkness is its own beauty.

Vagrant Story’s tale is by far the game’s greatest attribute. Set in the land of Valendia, a rebellious cult of religious fanatics known as Mullenkamp has surged in power and begun to challenge the structured church’s validity. “…Shepherding the masses has always been the church’s domain. You lure sheep with empty miracles and a dead god…” is but one of their claims, and only a glimpse at the depth the plot of this “dungeon hack” has. A series of layers built upon one another, too thick to be cut through all at once, instead the story must be peeled away one layer at a time until the true nature of what is going on is discovered.

When the leader of this cult, Sydney Losstarot, unleashes a series of attacks in the Kingdom and is pinned as the cause behind the burning of a noble’s manor, a warrior belonging to a group of elite fighters known as the Riskbreakers is called in. Ashley Riot furtively crosses into the manor and makes his stand against Sydney, where he is greeted to a man by all means demented and warped beyond comprehension. Sydney speaks to the Riskbreaker in a puzzling manner, talking of lost Souls and damaged pasts, claiming to have made a jump in evolution and commenting on inevitable change. Sickened, Ashley Riot lashes out at the madman with his crossbow, striking a deadly blow to Sydney’s chest. But much to Riot’s disbelief, Sydney rises unaffected by the wound and instead charges off, calling forth a Wyvern to deal with the nuisance of the Riskbreaker. Besting the dragon-like creature, Ashley pursues Sydney to the ruins of the once-great Lea Monde, where his journey down a road of self-discovery and the exposure of buried truths begins?/p>

Square has been blessed with a cadre of talented composers. Amongst them, Hitoshi Sakimoto was called to take on the task of weaving his dazzling and brilliant melodies into Vagrant Story. Fans of Final Fantasy Tactics’ score will undoubtedly fall in love with the music, as it carries the same epic feel that Tactics’ soundtrack conveyed. Fierce themes befitting battle complete with blaring horns and thunderous drums complement the sense of urgency during an encounter. Sakimoto’s talents extend beyond mere battle themes, as well, as the soundtrack also boasts numerous themes reflecting adventure, mystery, and suspense. Enchanting and dynamic, this only begins to describe each and every song that appears in the game. The music is truly a masterpiece and success of its own.

Laced with Square’s best touch, Vagrant Story is a game complete with satisfying, enjoyable gameplay and an even more fulfilling and captivating plot. A dark, chilling tale of political upheaval, deceit, and manipulation, Vagrant Story attests to Square’s story-pioneering capabilities. Outstanding dialogue, striking PSOne graphics, and an intricate battle system are only a few of Vagrant Story’s prominent traits. The game relies on no particular strength to stand out, but rather the amalgamation of all of these pieced together to form the grandness that is this title.