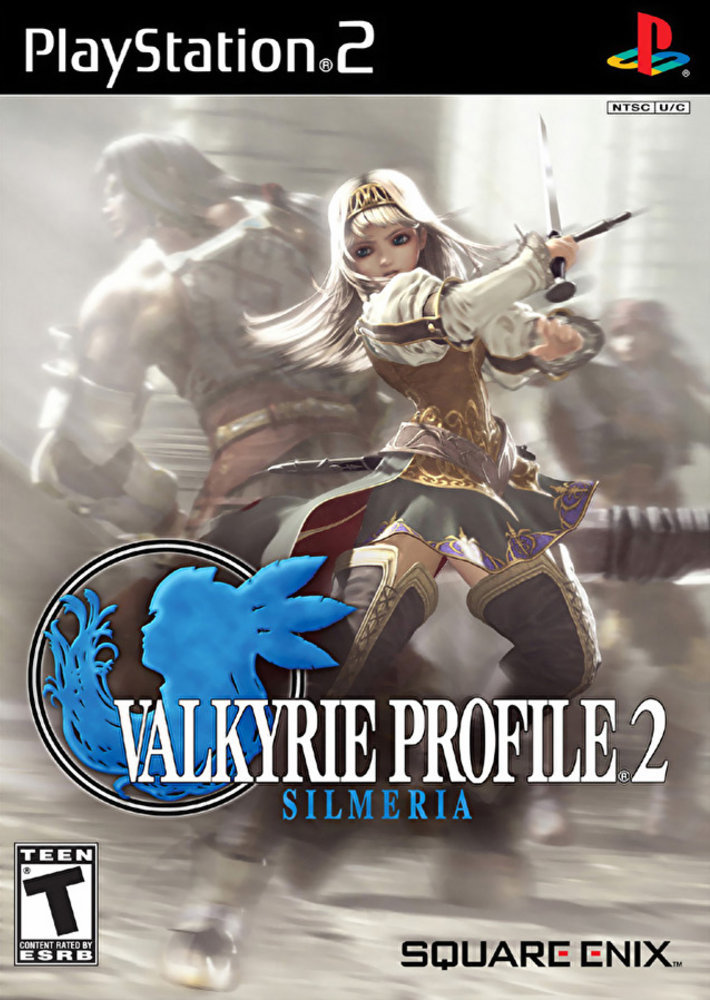 Valkyrie Profile 2: Silmeria is resigned to the same fate that has befallen Chrono Cross on message boards across the internet. Silmeria takes bits of the original Valkyrie Profile, like the action-oriented battle system and recruitment of Einherjar, and fuses it with a much more accessible linear focus. Valkyrie Profile 2 is an excellent game in its own regard, with a visceral battle system and amazing graphics; what it is not, however, is a spiritual successor to the original title, but a new stand-alone title that appeals to everyone.

Without a doubt, Valkyrie Profile 2: Silmeria is one of the most gorgeous looking games on the PlayStation 2. Just as games like Tourist Trophy have shown that the PS2 can still churn out models that rival big-budget Xbox 360 and PC games, Silmeria proves that the six-year old black monolith can produce amazing looking environments. The only issue comes not from anything tri-Ace has to do with, but the PS2’s lack of hardware anti-aliasing. Many environments, specifically Odin’s chamber, have far too much shimmering due to jaggies in what should be flush lines. tri-Ace did manage to throw some good-looking character models in the game, but unfortunately sacrificed Radiata Stories’ feature of showing each individual piece of gear the characters are wearing during cutscenes and battle. The characters’ armor and weapons look good, but the faces’ anime style aren’t incredibly detailed. Everything animates incredibly well during battle, and the spell and weapon effects in battle are simply fantastic. tri-Ace has gone above and beyond their normal visual prowess with Valkyrie Profile 2.

Valkyrie Profile, similar to many other PSOne RPGs of its time, featured quite a bit of voice acting… but it wasn’t very good. Silmeria certainly improves on the aural qualities of the first one, at the very least in the voice department. While there are quite a few good voices in the game, some do stick out as being particularly sub par. The other side of the aural coin, the music, is pretty positive overall. While I can’t say I’m a big fan of Motoi Sakuraba, his Silmeria music was of a higher quality than his other work. Everything fits the action on-screen well, and both of the Japanese OSTs are good purchases, even with a predilection to dislike Sakuraba.

The second Valkyrie Profile’s main draw is its gameplay. Silmeria introduces an elaborate, yet easy-to-grasp battle system that will appeal to both RPG veterans and relative newbies. Players are given 100 AP (or 0 AP, in the case of an ambush) at the beginning of a fight. This AP can be used to consume an item, cast a spell, or attack an enemy, assuming that the target is in range. The player’s party can attack everything within a circle around the controlled characters, though enemies’ attack ranges can be cone or line-shaped, depending on the attack. Of course, the enemies don’t have carte blanche to attack the player at any time; the player has to move into the field of attack of an NPC to be targeted. The only way to gain AP is either to charge while standing still or move about the map, and many monsters are far quicker than Alicia and her allies. 15 AP is all that it takes for a quick dash without enemies moving their cone of attack, as well as allowing Alicia and crew to cross any such cones.

While fighting enemies, each face button corresponds to an individual character’s attack. Depending on the weapon equipped, characters may have a different number of attacks, and the attacks used can be chosen in a menu outside of battle. While simple button mashing can win fights, extra items are obtained by destroying different portions of an enemy. Fights can be ended quickly if players are just after experience points, as the leader of the opposing party is always clearly marked, and taking him down ends the battle. Each strike adds a different amount to a hit meter, and if the meter reaches 100, the party can unleash devastating attacks afterward. These attacks are incredibly impressive-looking, and, thankfully, can be skipped the umpteenth time they are shown. The battle system is even more complicated than this for those who wish to delve further into the strategy, as the party can be split into two parts to flank attacks. While it sounds confusing initially, after a little bit in the game, it all feels like second nature, which is a true testament to tri-Ace’s design.

At the end of battle, experience is distributed as it is in most standard RPGs, but characters also gain skill points that are used to learn skills. Unlike games like Grandia III, however, these skills are not chosen from a menu, but are discovered from the equipment screen, where certain combinations of runes on equipment will unlock different skills. The formula is esoteric and based off of average party level compared to the enemy, so, like most everything else in a tri-Ace title, it’s very easy to abuse learning skills. These skills can range from the ability to parry or dodge attacks to additional attack power, to the ability to gain extra experience at the cost of statistics. Not all runes can be found in the world, however, and vendors will have to be sold certain items from monsters to be able to craft the weapon with the rune you need.

Outside of combat, the world’s not the same three dimensional plane, but a series of 2D planes just like the first game. In dungeons, Alicia can throw photons which can be bounced off of walls to freeze enemies, trigger events, or teleport her party. The main new feature compared to the first game is the teleportation; with it, tri-Ace was able to come up with some wicked puzzles that involve getting items into certain places or maneuvering into bizarre positions. Another wrinkle in the fabric of the dungeons are sealstones. These stones can be held by the party to affect different aspects, or placed into a receptacle to provide the effect across an area or to enemies. As mentioned before, this is a tri-Ace game, so you can abuse this very easily, as well. There is a sealstone that gives the affected party extra power, but at the cost of regularly taking damage. When broadcast, it’s easy enough to simply charge up and avoid enemy attacks as they kill themselves. The fact that both towns and dungeons are multiple planes can be a bit confusing, especially considering the fact that the map is hard to read the first time you see it. However, this bizarre setup for a modern game helps to provide Silmeria with a charm that’s missing in many games.

Characters are recruited in Silmeria in almost the opposite way as they are in Lenneth. Instead of searching out the souls of the dying to fight in Valhalla, Silmeria has several Einherjar who are being reinstated on earth. Artifacts she discovers on her travels will give up a party member randomly based on the location. This keeps things fresh, but can also be a bit frustrating if you’re after a particular party member out of a spot that’s not near a save point. These people, instead of being sent to fight for Odin after a time, are instead released to return to their place in the world. When and if you find these people again, they will reward you with items, money, or advice.

The one place where the game stumbles a bit is the story. Not that the dialogue isn’t fantastic and that the story isn’t interesting in Chapters 1, 2, 4, and 5, it’s that Chapter 3 provides a very small amount of character development and devolves into following an object across the world. This object, the Dragon Orb, is the only thing that can help the city of Dipan and Silmeria, trapped inside the mortal body of Alicia, defeat Odin and attain power. Alicia, the princess of Dipan, is thought to be dead by the entire world, but is helping Silmeria so that she can finally have her father’s love, untainted by the soul of another sharing her body. The Einherjar, servants of the Valkyrie, who are stored inside the body of Silmeria get very little face time; their backgrounds are no longer sequences in the game, but blocks of text in their profile screen. In every other sense, the story of Silmeria is absolutely stupendous, but the action draws to a screeching halt during the middle portion of the game. Luckily, unlike the Xenosaga games, the battle system is more than engaging enough for this to be a middling fault.

Valkyrie Profile 2 is one of the best games of this year, and was entirely deserving of our “Best of E3 2006” award. With a fantastic tri-Ace battle system that’s both accessible and deep, Square Enix has provided a sequel that both fans and newbies will love equally. While some fans of the original may turn their nose up at a game that doesn’t directly ape the original’s focus, Valkyrie Profile 2 shares the same spot as Chrono Chross by being a simply fantastic game, regardless of its prequel’s focus. If you’re at all a fan of RPGs, Valkyrie Profile 2: Silmeria is an absolutely solid purchase.