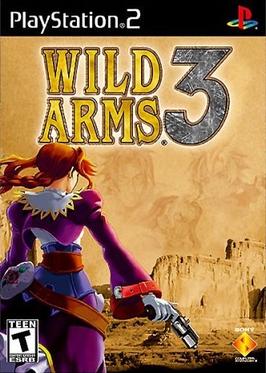 Before there was a Final Fantasy title on the PlayStation, before there was a Xenogears…hell, before there was basically any RPG for Sony’s fledgling console, there was Wild ARMs. It played well, and despite the characters suffering from big-head syndrome in battle sequences, was a solid title. Of course, it garnered a sequel, which made some much-needed improvements to the series (including the aforementioned big-head syndrome). The series then graduated from that little gray box to the PS2, and along with the obvious graphical facelift, Wild ARMs 3 also proves to be the most polished title in the series.

The previous two Wild ARMs titles had a Wild West setting, and the third is no different. The game does an excellent job of thrusting the gamer into immediate action. It begins on a train, which is apparently carrying some sort of treasured item. The camera focuses on Virginia Maxwell, a young female Drifter (fame/fortune seekers), who notices that something is going on. She runs to the car holding said treasure, and encounters three other people, all of whom are apparently after this same treasure! At this point, players can choose which character to play as, and then get to experience that character’s events leading up to the train scene.

The rest of the story is just about as well written as the introductory sequences and chapters. The game takes place in the world of Filgaia, like the original two, and has the same history: the world was ravaged long ago by a war between Humans/Guardians and Demons. It left Filgaia crippled, and the world has become increasingly desolate ever since. Of course, the plot escalates beyond what you see initially to something much more epic in scope. It’s not the most original plot or the deepest, but Wild ARMs 3 most definitely has the best plot of the three games, partially due to the excellent translation and presentation.

Gameplay is similar to the previous titles. In fact, it’s just about the same thing, with minor enhancements and different ability management systems. Wild ARMs 3 has dungeons that require some degree of thinking on the player’s part. There are traps and mazes in each dungeon; nothing is really straightforward. Characters have individual items that will be necessary in order to complete puzzles (and there are plenty of those). This makes dungeon-crawling fun, rather than a simple walking from point A to point B while battling here and there. Sadly, there are also random battles, which this reviewer would have hoped to see worked out of traditional RPG’s by now. However, Wild ARMs 3 also incorporates a modified system of battle aversion that was present in the previous game(s). If a battle can be avoided, a white or green exclamation point will appear above the character’s head. By pressing the O button, players can avoid the random battle and continue their attempt to figure out some of the most frustrating puzzles ever presented in a traditional console RPG. The game will only allow a certain amount of battles that cause a white exclamation point to be avoided before they can be avoided no more (until the player wins a battle and lowers the Encounter gauge or rests). Red exclamation points mean that the battle is unavoidable, and it’s time to rock. Battles are fought in traditional console RPG fare, with the inclusion of magic, Guardian summoning, and status effects. Controlling the characters through the battles is a breeze. The only control issue is the dashing function, which is sloppier than anything.

Wild ARMs 3 takes a step in a “different” direction with the graphical presentation. The game is polygonal and cel-shaded. The results are somewhat mixed. The cel-shading is a welcome, artistic addition to the game. However, there are far too many instances of the cel-shading failing to impress. There were many instances where this reviewer questioned if whatever was on screen could have been rendered on a PlayStation. The characters, while colorful and designed very well, seem much too bulky; as if they’re constructed of too few polygons, a symptom that shouldn’t happen on a PS2 title. Locales and the world map are graphically impressive; towns are colorful and detailed. Dungeons tend to be bland in the color department, but that’s been with the series since the first title.

Aurally, Wild ARMs 3 impresses. The music retains its Western style, which is obvious with the heavy use of the acoustic guitar. There are numerous tracks, and rarely did one turn out to be a bland piece; there was usually a simple melody accompanied by light percussion. The sound effects are also of high quality, from spell casting to gunshots. The only noticeable omission is voice acting, which is becoming more and more prevalent in RPG’s. It would have been a nice addition (if recorded well), but the text suffices, thanks to the above-par translation effort.

Wild ARMs 3 impresses the most in its presentation. The game attempts to sweep the player away from the real world into that of a desolate world with ties to the old mythical “Wild West”. There’s an interesting story to be told, and fans of the genre won’t want to miss this one. It’s the best in the series; Media Vision took everything from the first two titles, ironed out most of the problems, and polished it all up for this third installment.