World of Final Fantasy almost feels like a kid's movie that makes frequent winks and nods to the adults in the audience, except that it does so without an understanding of how to fully appeal to either demographic. 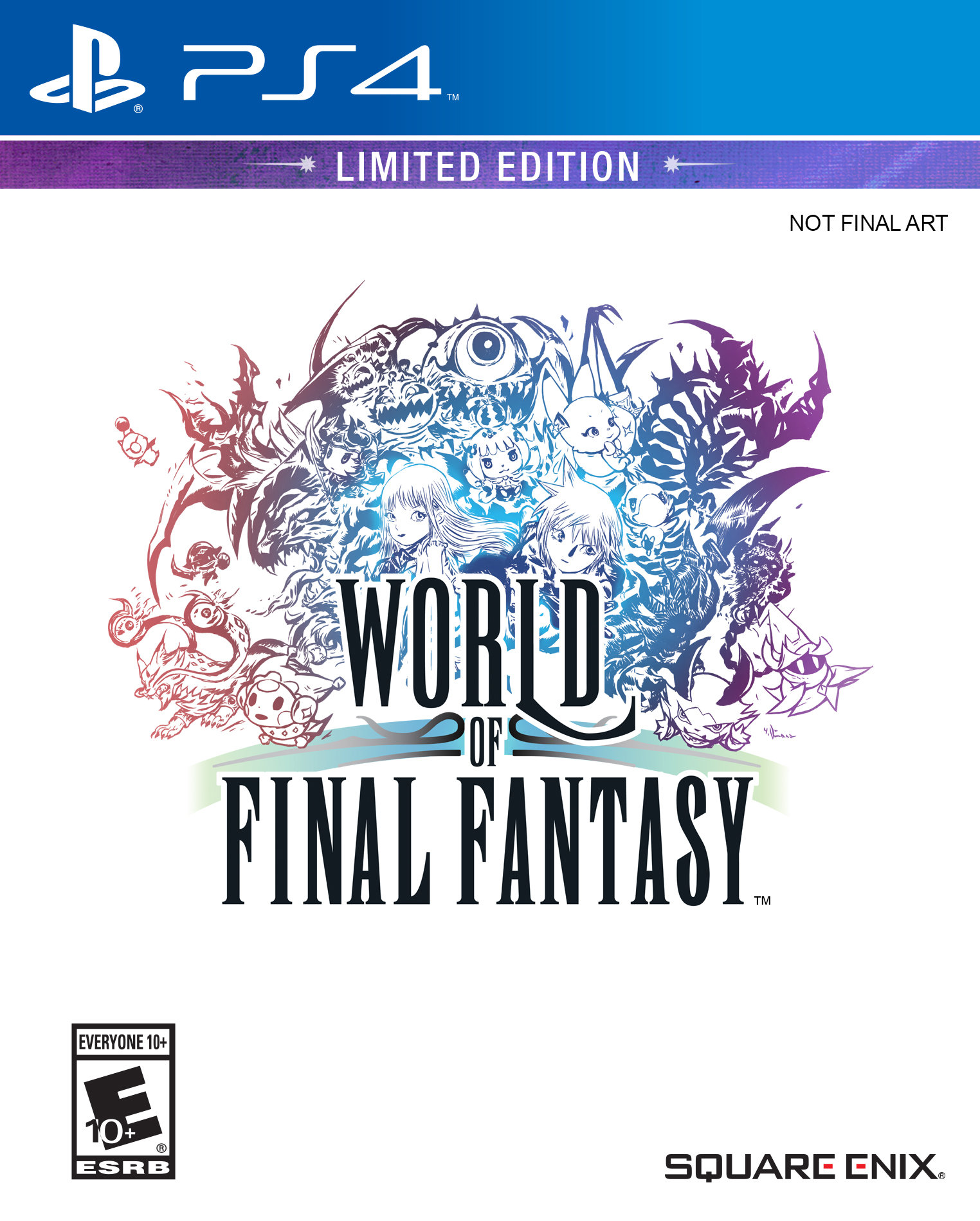 It’s kind of amazing that after three decades of Final Fantasy, its fifteen numbered titles have spawned spin-offs ranging from board games to rhythm adventures to gacha titles aplenty, but it took until 2016 for Square Enix to set its sights on emulating the wildly successful Pokémon formula. Sure, previous titles like Final Fantasy XIII-2 and Final Fantasy Tactics have featured monster-taming elements, but never as the main conceit of their gameplay systems. Enter World of Final Fantasy, the company’s latest attempt to leverage their considerable catalog of creatures and characters. This nostalgia-fueled collectathon is a pleasant, if juvenile, tour of Final Fantasy’s greatest hits, though its addictive gameplay comes as a package deal with a narrative that doesn’t seem to know its audience. Is World of Final Fantasy targeted at younger players as a means of introducing them to the franchise, or is it banking on cameos and references to entice long-time fans? The answer is both, kind of, which is as confusing as it sounds.

World of Final Fantasy has a story to follow, that much is certain. Amnesiac wonder twins Lann and Reynn awaken one day to the fact that they’ve been living in a false reality frozen in time. Guided by a mysterious godlike figure, Enna Kros, and her…assistant, the incessantly chirpy fox-thing Tama, the two journey to the land of Grymoire to restore their lost memories. Grymoire plays at being a fully-realized world, but it’s actually an amalgam of Final Fantasy locales past. The twins journey across a variety of distinct, predictable biomes, paying visit to famous villages like Besaid, Nibelheim, Cornelia, and more— only these places aren’t quite as you remember them. They’re instead visual stand-ins for the Final Fantasy worlds they hail from, and are typically home to one or more characters from their respective games. The trouble is that while it’s fun to see fan-favorite characters pop up every now and then, World of Final Fantasy takes the “Big Bang Theory approach” to referential material; easily 80% of its cutscenes are basically the game saying, “Hey, remember [Final Fantasy character]? Me too. Here they are, fighting the bad guys. Now listen as Lann makes a contextually-appropriate pun while Reynn berates him for his immaturity.” This is to say nothing of Tama, the floating mascot character with a verbal tic where she inserts “the-” in front of half of her words for no reason. It’s the-really irritating after about five the-minutes, in case that isn’t immediately the-evident.

The game undeniably aims to be a celebration of Final Fantasy lore, but remains frustratingly shallow. The “real” plot is heavily backloaded, and everything in between is essentially a series of fanservice-laden vignettes. While not an inherently faulty premise, I found WoFF’s brand of humor to be mostly trite, and had difficulty investing myself in plot points I saw coming from a million miles away. Furthermore, the cameo characters frequently reprise roles they played in their respective games, making their functions in the story all-too-predictable. What baffles me most is that WoFF’s writing is squarely aimed at a younger audience (“What the honk!” is Lann’s favorite turn of phrase, and Reynn’s slapstick rivalry with a Cactuar is something straight out of Yo-Kai Watch), but the game seems to expect at least cursory familiarity with Final Fantasy titles that are literally decades old. It almost feels like a kid’s movie that makes frequent winks and nods to the adults in the audience, except that it does so without an understanding of how to fully appeal to either demographic. Still, the story has its moments, and a few cameo characters play important enough roles that they don’t feel completely superfluous.

Creature collection in WoFF is a more robust activity than one might expect; in the game’s turn-based battles, the player must fulfill a specific condition that varies on a creature-by-creature basis before they can be “Imprismed,” or captured. These range from simply reducing enemy HP, to healing them or inflicting specific status effects. It makes acquiring new monsters a dynamic process that lies somewhere between Pokémon and Shin Megami Tensei in terms of complexity. WoFF’s combat is built around the notion of stacking creatures on top of the twins’ heads, or having them ride larger monsters, in order to pool the combatants’ stats and abilities. Battles employ the ATB system that Final Fantasy made famous, complete with a Limit Break-esque system that allows the twins to summon many of the FF heroes they encounter to unleash flashy and devastating super-moves. Additional wrinkles come in the form of Mirage Boards, monster-specific growth systems not unlike FFX’s Sphere Grid, and Mirajewels, crystallized monster abilities that the twins can equip for their own use. A fast-forward option, accessible both within battle and without, rounds out the mechanically solid yet unvarnished package. More importantly, there are Moogle pirates called— are you ready— KUPIRATES. I mean, come on. There’s cute and then there are Kupirates.

Grymoire is a colorful world populated by cute creatures, and even though the chibi human characters aren’t to my taste (which is putting it lightly), the game’s visual fidelity is undeniably high-quality. While overly simplistic in terms of level design, the game’s environments remain beautifully evocative of classic Final Fantasy locales. Even better is Masashi Hamauzu’s masterful musical score, which is one of the best soundtracks I’ve heard all year. It’s full of both brand-new melodies and fresh arrangements of famous FF tunes, many of which carry a light, ephemeral quality perfectly suited to the game’s storybook world. You’d better believe I’ll be buying this OST as soon as I can following its Japanese release on November 2nd. I am unworthy, Hamauzu-san.

Evaluating World of Final Fantasy as a complete package feels a little strange because its target audience is so ambiguous. I’ve been playing Final Fantasy for the majority of my life, and yet it’s almost as if WoFF has no idea how to appeal to me as a longtime fan. I love the series for a multitude of reasons, but WoFF’s fanservice feels cheap, and does disservice to the original works it references. If cameos alone are enough to make you squeal with delight, then WoFF is going to be right up your alley. For me, the real draw was capturing the game’s litany of adorable Final Fantasy creatures, reveling in their droll bestiary descriptions, and idling about while Hamauzu’s soundtrack transported me to a world of musical bliss far more interesting than Grymoire could ever be.

Juvenile story with an ambiguous target audience, shallow fanservice, fairly simplistic combat, OMG I cannot stand the chibi characters please get them away from me.

This nostalgia-fueled collectathon is a pleasant, if juvenile, tour of Final Fantasy's greatest hits.