Yakuza: Like a Dragon
Review by Jonathan Logan · January 8, 2021

For traditional RPG fans who were on the fence about Yakuza, this new JRPG-inspired entry is the perfect place to start. 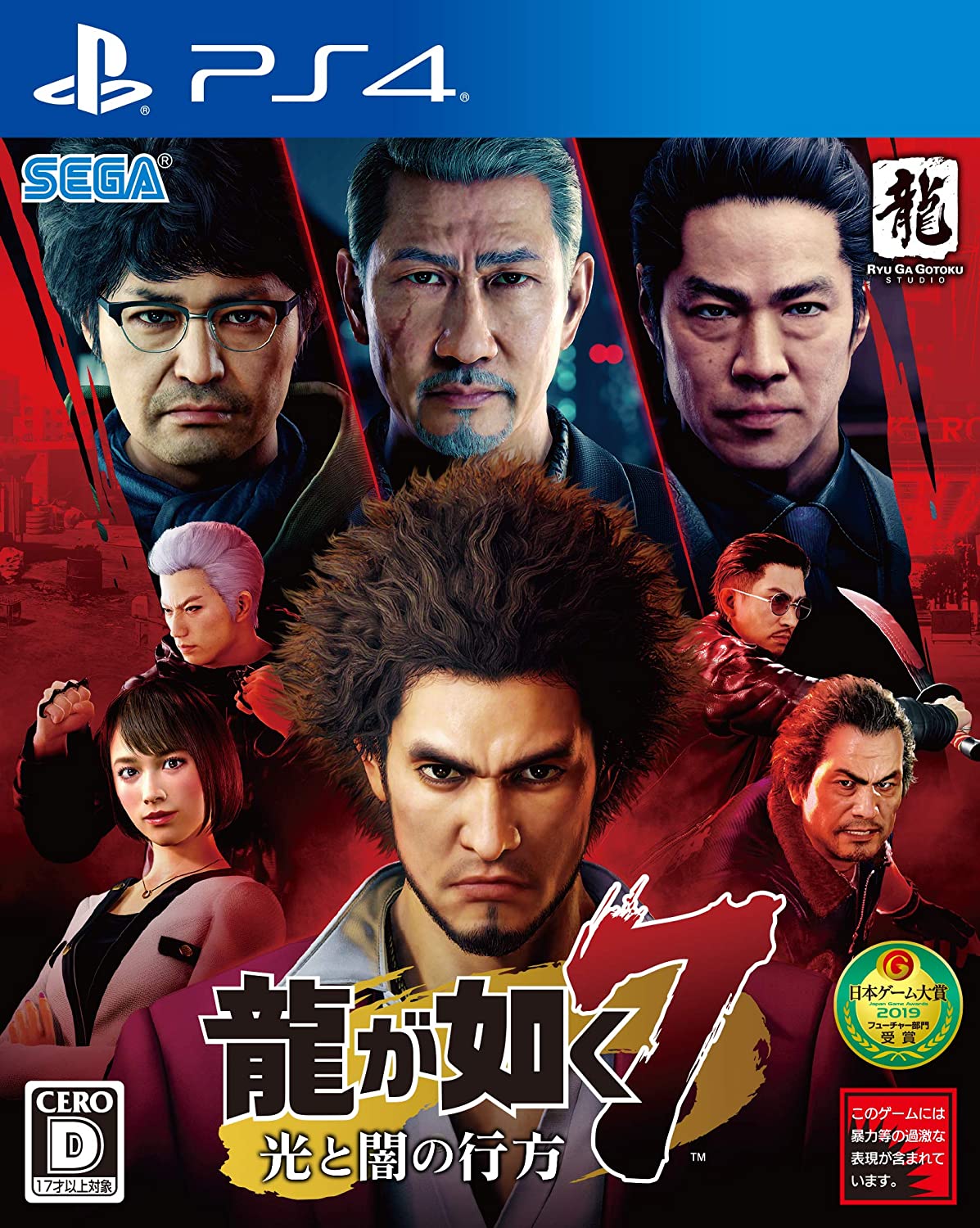 Yakuza was always the very definition of a cult favorite video game series. Its unique mix of heartfelt melodrama and comedic absurdity won it fans worldwide throughout its seven main entries, two remakes, and countless spin-offs. But for many lovers of traditional JRPGs, the button-mashing, beat-em-up combat has always been a turnoff.

Well, it’s time for a change! Yakuza has reinvented itself with turn-based battles, a job system, and many other classic JRPG tropes and mechanics. Does it pull it off? And more importantly, does it open itself up to a brand-new audience that could launch it from cult classic to mainstream success?

The Tojo Clan has fallen! Eighteen years after being sent to jail for a murder he didn’t commit, ex-yakuza Ichiban Kasuga returns to Kamurocho to find the Omi Alliance in charge. Worse, his former Tojo Patriarch, Arakawa, is now their second-in-command! After being betrayed and shot by Arakawa, Ichiban finds himself exiled and homeless in Yokohama’s Isezaki Ijincho district. Determined to discover the truth of the Tojo Clan’s downfall, Ichi decides to become a hero, just like in his favorite RPG, Dragon Quest. Joined by a party of friends and allies, he will face urban dungeons, slimy enemies, and never-ending side quests to uncover the truth and, maybe, restore the Tojo Clan to its rightful place forever!

As a soft “reboot” of the series, Yakuza: Like a Dragon hits many of the same story beats of the original Yakuza (or Kiwami): A Yakuza with a heart of gold is sent to jail for a murder he didn’t commit, returning to society decades later to discover that the organization he loves has lost its way. But within that setup, the motivations of the main characters are entirely different. Kazuma Kiryu went to jail to protect his friends; Ichiban went to protect his patriarch. While both got stabbed in the back, each experiences a very different type of betrayal. For Kiryu, it was his sworn brother, but for Ichiban, it was his father figure. That difference sends Ichiban down a very different road from his protagonist predecessor.

When I first heard the team at Ryu Ga Gotoku Studio went with Dragon Quest as the inspiration, I was surprised. After all, it isn’t one of their properties, and there has never been a Dragon Quest release on a SEGA system. That said, I’m thrilled they did because it lends the game an air of authenticity. Saying that Ichiban’s favorite RPG series was “Arakure Quest” or something derivative wouldn’t have the same impact. After all, Japan’s love for Dragon Quest is legendary, and Ichiban wears that love as a badge of pride. In fact, the passion for Dragon Quest runs through every aspect of the experience. For example, you get treated to 16-bit, Dragon Quest-style sprites of your party on loading screens, marching in place. That’s just one of the countless references running throughout the game, along with nods to other popular JRPG series like Pokémon and Final Fantasy.

I was also surprised by the social consciousness inherent in the story of Yakuza: Like a Dragon. It tackles several social ills, including homelessness, prostitution, elder abuse, illegal immigration, and suicide with empathy. The Yakuza series has always portrayed the homeless in a sympathetic light, but Like a Dragon literally puts you in their shoes. It’s rare to see a game spend its first few chapters in the gutters, scrounging for change under vending machines and collecting cans for money. Moreover, the lessons learned and bonds formed during this time significantly influence Ichiban’s hero’s journey.

Speaking of Ichiban, he is a refreshing change of pace from other Yakuza protagonists. Unlike the idealistic stoicism of Kazuma Kiryu and the bombastic pragmatism of Goro Majima, Ichi is something new: a good-natured, friendly dumbass! He genuinely loves people and builds trust and rapport with them almost instantly. In a JRPG where relationships between party members are vital, this new protagonist’s sensibilities are a perfect fit. Each party member has their own side quest that you can learn about in conversation with them at your favorite karaoke joint. These growing bonds of friendship between party members make for compelling storytelling, getting you rapidly invested in these new Yakuza characters and their quests.

That isn’t to say that characters from previous Yakuza games won’t make appearances, but they are cameos at best. For once, the Dragon of Dojima seems to have taken his retirement seriously (which might be the reason why the Tojo Clan fell only three years after Yakuza 6, but hey, the man did prop them up for over 20 years).

Another thing that Ichi has in common with Kiryu is his inability to say “No” to any random person on the street. Substories are as plentiful as always, ranging from touching and exciting to the sublimely absurd. On top of the usual substories, completion challenges are now part of gameplay through the “Part-Time Hero” side quest. Here, Ichi is hired by Part-Time Hero Inc. to defend the city, rescue people, deliver goods to the needy, and get top scores in golf and baseball. These small diversions are a great way to break up the story moments and can be found all over Isezaki Ijincho.

Minigames are a crucial part of what makes Yakuza, and there are record-breaking numbers of them in Like a Dragon. If you were a fan of Pocket Circuit in Yakuza 0 and Kiwami, you’re going to love Dragon Kart: a full-blown kart racer stuck into the middle of the game. For lovers of management sims, there is an hours-long business management side quest. And let’s not forget all of the usual side activities like the batting cages, karaoke, and classic SEGA arcade games. Though there are a few minigames thrown in that are a little underdeveloped, you will still have enough side content to distract you from your main quest for hundreds of hours, if not more!

As Ichi views his entire life through the lens of a JRPG, he also sees combat in turn-based terms (literally, as random street punks transform into JRPG monsters before his eyes). Though the battles look superficially similar to other entries in the Yakuza series, they’re purely menu-based. At the beginning of every turn, you have the option to fight, guard, use an item, or pick a skill.

Unlike the slow-pace found in many turn-based JRPGs, the combat here is almost as fast and fluid as in a traditional Yakuza game. Positioning and timing matter, especially if you want to make use of the environment. A kick in the right place and time can splay enemies into the path of oncoming cars. If a bicycle happens to be beside you when you start your attack, your character will pick it up and hammer enemies with it (in the grand Yakuza tradition) without any prompting necessary. Pathfinding in battles can be hit or miss, as characters sometimes get stuck on corners, cars, or street pylons on their way to attack enemies. Thankfully, the game eventually figures this out and teleports your character to attack, but that pause can kill the momentum of a battle.

Alongside the turn-based battles, Like a Dragon has adopted other well-trodden JRPG conventions, including summons in battles, crafting/blacksmithing, dungeon crawling, and a job system. While some are executed masterfully, others need a little more work. The job system takes the main character archetypes known to Yakuza fans and matches them with common JRPG classes. Your “white mage” class is an Idol, whose songs help to heal and buff your party. Your “black mage” is is a Host, using a combination of different liquors to serve up elemental damage to your foes. Each character has an inherent class, but by switching up their jobs regularly, you can customize your characters to match your own particular playstyle. It’s a wonderfully creative take the pulls the JRPG job system into the modern-day.

Unfortunately, dungeon design lacks the imagination found elsewhere in the game, most often taking place in similar-looking sewers under the city streets. You only need to enter these dungeons a few times in the main quest, but after completing them, they become accessible at any time. Though optional, these dungeons become the only way to effectively grind later into the game. It can be a real slog to repeatedly make your way through these visually unappealing sewers for crafting components and much-needed experience to boost your stats to end-game levels.

Though I wouldn’t say that Yakuza: Like a Dragon looks stunning, the graphics do the trick nicely, especially when it comes to the environments. Isezaki Ijincho shows how much the series’ visuals have evolved, delivering a fully realized city that’s almost three times the size of Kamurocho. But as per usual, it’s the sound where the game excels. They’ve really leaned into Yakuza’s musical history here. CDs are found throughout the cities, each containing classic Yakuza karaoke and dance battle songs (along with music from other SEGA titles).

Like a Dragon also brings a new feature to the main series: English voice acting. There haven’t been English voices in a Yakuza game (excluding Judgment) since the original’s cringe-worthy translation on PS2 in 2006. Thankfully, this new VO is top-notch, with exceptional acting that perfectly communicates the game’s intended tone and story. That said, I just couldn’t get used to playing a Yakuza title in English, so I quickly switched back to the original Japanese. Either way, you’re in for some outstanding performances.

After over 100 hours of play, I’ve completely fallen in love with this new take on Yakuza. With its robust character relationships, expansive job system, kinetic turn-based combat, and all of the usual Yakuza wackiness and heartbreak, this has rapidly become my current favorite in the series. For traditional RPG fans on the fence about Yakuza, this new JRPG-inspired entry is the perfect place to start! For those who prefer the classic beat-em-up combat, I implore you to give the new gameplay a try. If it doesn’t stick, don’t worry, because I suspect that Judgment will become the new home of this time-tested combat system. For me, Yakuza: Like a Dragon stands as one of the greatest RPGs of 2020 and (hopefully) the beginning of a brand-new era of Yakuza!

Note: This article was originally published, sans scores, as a review-in-progress on November 4, 2020.

In Yakuza: Like a Dragon, the beat-em-up gameplay of the series transforms into a massive turn-based JPRG in spectacular fashion.