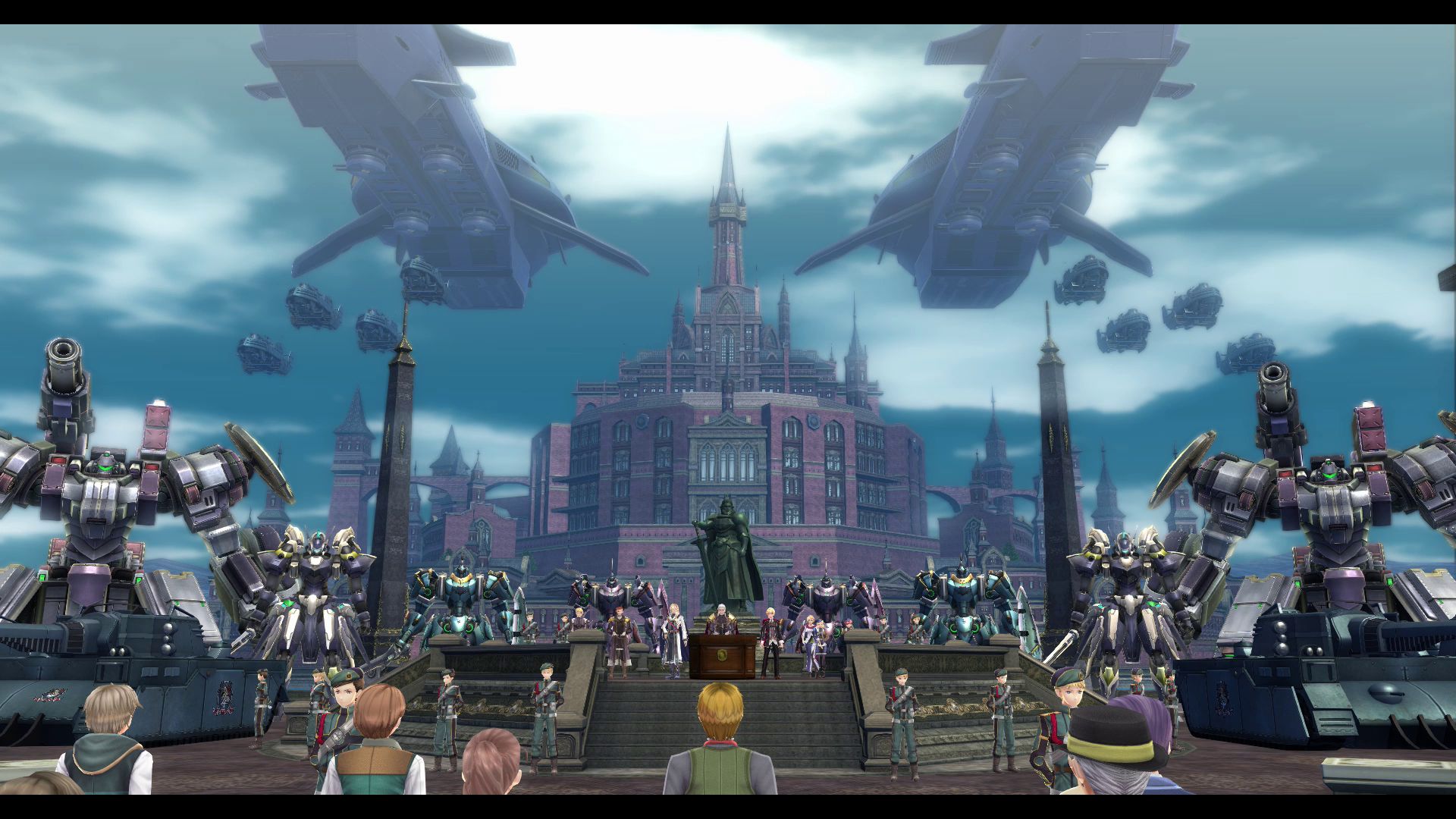 If you’re a regular here at RPGFan, you may already know that a fair number of us are heckin’ excited for the release of Trails of Cold Steel IV. The conclusion to the Erebonian arc in Falcom’s long-running Trails series is kind of a big deal. But Rean Schwarzer isn’t the only shining star this week, so let’s take a quick look at several tricky treats.

Described as “an old-school, first person, party-based RPG,” Arcante is a game that not only hearkens back to the style of combat prevalent among PC RPGs in the late 90s and early aughts; its true goal is to give players that vintage sense of confusion that can only be remedied by talking to plentiful NPCs and charting self-made courses toward nebulous objectives. If you’ve felt let-down by the skittishness that modern RPG developers frequently express toward the notion of not giving gamers a guiding path, Arcante may be the sword-and-board breath of fresh air you’ve been seeking. Tutorials are relatively rare and exploration is practically the name of the game.

It’s finally here: the concluding chapter to the story of Rean Schwarzer and friends. If your only experience with Falcom’s incredible Trails franchise is a couple of underwhelming hours with the first game (Trails in the Sky) then you’re going to be beyond confused just diving into Trails of Cold Steel IV, so go back to the original title and power through the slower moments on your way to an exceptional second game and beyond. Conversely, if you’ve only been playing the Trails of Cold Steel sub-series, it’s quite possible that you’re still confused; after all, the Trails in the Sky trilogy and Japan-only Crossbell duology are both of vital importance to the plot and characterization found in this fourth entry. We’re certainly hoping that the Crossbell games eventually make it overseas, but even with that disclaimer in place, this probably sounds pretty complicated — and it is. So, is Trails of Cold Steel IV worth sifting through six other games and watching or playing fan-translated versions of another two? Definitely. The game itself is pretty good, but the best thing about Trails is seeing its diverse cast of multinational heroes and antiheroes develop in meaningful ways throughout the most sprawling, interconnected series in JRPG history. And luckily, RPGFan’s Scott Clay assembled an excellent feature last fall (and updated recently!) that helps to make this all far less daunting to dive into today, giving newcomers a comprehensive and comprehensible path!

We’re really starting to see the aesthetic impact that 2017’s The Legend of Zelda: Breath of the Wild has had on the industry this year, with games like Genshin Impact bearing more than a passing resemblance to Nintendo’s phenomenal “open-air” Switch launch exclusive. Oceanhorn 2: Knights of the Lost Realm follows suit, replicating that iconic look in key aspects whilst retaining some audiovisual identity of its own. Whereas Genshin Impact separates itself from Breath of the Wild aesthetically through a cast of more anime-influenced character designs, Oceanhorn 2 opts for a more Westernized spin on its own friends and foes. Inevitable Hyrulean comparisons aside [Editor’s Note: The first Oceanhorn was a very intentional—if isometic—homage to classic top-down Zelda titles], Oceanhorn 2: Knights of the Lost Realm features a main quest that will last you an estimated 20+ hours; there are massive boss fights to test your abilities, and even a supportive robot pal who wields a samurai sword. The original Oceanhorn graced mobile devices and home consoles seven years ago, so fans should enjoy their return trip to the mystical world of Gaia. This adventurous sequel debuted on Apple Arcade late last year, but it will land on Nintendo Switch this Wednesday.

Xuan-Yuan Sword is China’s oldest and longest-lasting series of RPGs. Beginning in 1990 and spawning not just seven mainline titles but numerous spinoffs as well, the games are known for incorporating a blend of Chinese myths and historical events. The titular Xuan-Yuan Sword is a Chinese legend; it is said to have been wielded by the Yellow Emperor, Huangdi, in ancient times. (As an anthropology minor, I can’t help but add here that Huangdi’s mythical reign dates as far back as 2698 BCE. It wasn’t until the 1920s that doubt was cast on whether or not Huangdi ever existed. The more you know!) Xuan-Yuan Sword VII is set during the waning days of the Western Han Dynasty. A new dynasty called Xin is rising, and a decade of war and famine soon follows. Taishi Zhao is a kindhearted swordsman who sets out on a journey to protect his family during these dark times. With philosophical themes including the logic school of Mohism and deadly monsters to slay, Xuan-Yuan Sword VII might set a new standard in DOMO Studio’s storied saga for marrying deep cultural quandaries with fantastic beasts and fancy swordplay.

Lovecraftian themes abound in Stirring Abyss. Ancient mysteries can only be uncovered by those who are willing to risk life and limb combing the depths of deep seas, which is my way of saying that I would absolutely not do what the game’s characters do in real-life. Joining an Eco-terrorist group to topple a despotic electric company’s regime? I’ll grab my oversized sword and meet you on the train. Saving a struggling kingdom from an underworld invasion of cruel, zombie-like monsters who follow an Archdemon hellbent on spreading chaos at any cost? My spells are at your command. Undergoing a nautical mission where eldritch horrors lurk in murky trenches? A thousand times no. But hey, that doesn’t mean I won’t play as these poor, brave, bastards. Stirring Abyss touts an appropriately haunting soundtrack and a slick, painterly art style. Fights are tough but crunchy RPG systems abound, enabling strategy-minded folks to navigate their way across old ruins. “In deep waters,” the story trailer’s narrator warns, “the smallest ripple can change everything.” I’m not scared. You’re scared.

Has any story began with a premise such as “four college students and their teacher survive a bus crash, but end up stranded in an isolated town, miles from civilization” and turned out well for all involved parties? I suppose there’s always a first time, but I get the feeling there may be Little Hope for an ending of rainbows and puppies in… Little Hope. This is Supermassive Games’ second outing in The Dark Pictures Anthology after 2019’s Man of Medan, conveniently landing right before Halloween. Like last year’s outing, Little Hope‘s decision-centric gameplay can be enjoyed online and offline with friends. So if a poor choice leads to a character’s death, there’s every chance it can be your friend’s fault. But you’ll want to think on your toes to learn the truth of the apparitions you’ll find in town, “before the evil forces at work drags each of their souls to hell.” Oh, hell. See? I knew those rainbows weren’t likely to appear here. Read Peter’s Man of Medan review in the meantime, and look for our review of Little Hope soon!

Getting real with y’all for just two sentences, please practice social distancing and be mindful of others during 2020’s uniquely challenging upcoming Halloween. I still plan on having fun with a few friends but we’re going to be doing our best to brace for the dangers of COVID-19 reality we presently live in. But back to fun — there is arguably no better way for us rad nerds to social distance than to settle in with our loved ones and play great RPGs while popping chocolates into our mouths until we’re made of sugar. I’ve actually got Luigi’s Mansion 3 on the docket for Halloween; it’s not exactly an RPG, but I’ve been excited to try it out and I’ve intentionally waited until now to do so. But Trails of Cold Steel IV and this week’s other promising role-playing releases are all worth a shot. Whatever it is you play, or wherever it is you go, come back next week as we enter November and get psyched for new RPGs all over again!