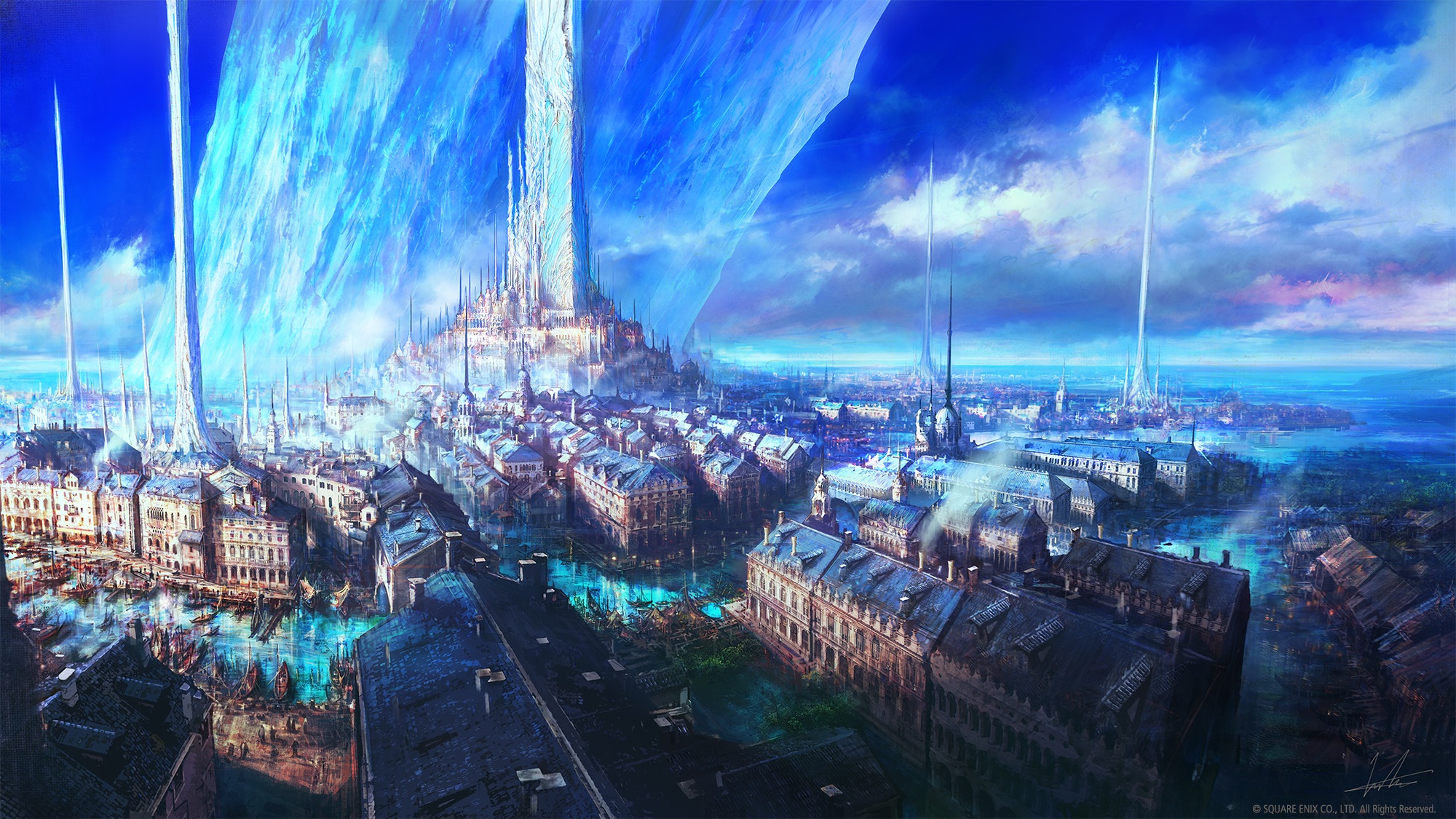 To say that many of us here at RPGFan are hyped for Final Fantasy XVI is about as much of an understatement as telling somebody that casting Aura is “a tad helpful” when fighting Omega Weapon in Final Fantasy VIII. Even when all we had was last month’s announcement trailer, I was so impressed with that first look that I felt damned privileged to write about it. Let’s just say securing a PlayStation 5 suddenly meant a great deal more to me the minute I finished watching that thing… which is why today’s launch of the game’s promised teaser website has me smiling so much my cat is probably wondering what is wrong with me.

But enough about me. You’re here to soak in these fresh new world-building details of Square Enix’s next big mainline FF tour de force, so let’s get wet and wild.

Let’s start with some new information on three of the game’s leading characters. Clive, Joshua, and Jill will all play key roles in the story of Final Fantasy XVI, and while I’ve seen a few snide comments about how abnormally normal those names are, I’m going to level with you: I find this refreshing relative to names like Snow and Barbaneth Beoulve. The latter is impossible to take seriously and the former is… snow. #IJiveWithClive.

Clive Rosfield
The firstborn son of the Archduke of Rosaria. Though all expected him to inherit the Phoenix’s flames and awaken as its Dominant, destiny instead chose his younger brother Joshua to bear this burden. In search of a role of his own, Clive dedicated himself to mastering the blade. His practice pays off when, at just fifteen years of age, he wins the ducal tournament and is dubbed the First Shield of Rosaria—tasked to guard the Phoenix and blessed with the ability to wield a part of his fire. Alas, Clive’s promising career is to end in tragedy at the hands of a mysterious dark Eikon, Ifrit, setting him on a dangerous road to revenge.

Joshua Rosfield
The second son of the Archduke of Rosaria and Clive’s younger brother by five years. Joshua awoke as the Dominant of the Phoenix soon after his birth. Despite his noble upbringing, Joshua treats all his father’s subjects with warmth and affection—none more so than Clive, whom he deeply admires. Joshua often laments that it was he, the frail and bookish younger son, who was granted command of the firebird’s flames, and not his stronger, braver brother. While Clive will gladly throw himself into any danger, Joshua quails at the sight of a carrot on his dinner plate. But carrots become the least of his concern when he, too, is swept up into the tragic events that change Clive’s life forever.

Jill Warrick
Born in the fallen Northern Territories, Jill was taken from her homeland at a tender age to become a ward of Rosaria, securing peace between the two warring nations. The Archduke insisted that she be raised alongside his sons, and now, at twelve years of age, she is as much a part of the Rosfield household as Clive and Joshua. Ever kind, gracious, and unassuming, Jill has become a trusted confidant to the brothers.

I’d like to briefly note that Naoki Yoshida himself has confirmed today that Clive is, indeed, both the young knight and the tattooed man in the reveal trailer. Between that fact and the very young ages of Joshua and especially Jill in the above descriptions, at this point there’s almost no chance that Final Fantasy XVI doesn’t involve at least one considerable time skip. Such a plot device makes me think of Final Fantasy Tactics, a game which also began with relatively naive characters before jumping ahead a bit and painting their stories with shades of revenge.

Moving on to the meat of the website, we’ve been given sterling descriptions of six (!) separate factions, as well as the name of the game’s world and further context for its mythical Eikons. I’m going to quote Yoshida-san’s overview of these details rather than the website’s more in-depth information because quite frankly, the site is gorgeous and you’ll have more fun diving deeper into its offerings on its world page than reading snippets here!

Final Fantasy XVI’s adventure takes place in a land called Valisthea, which is studded with colossal mountains of glittering crystal called Mothercrystals. These Mothercrystals have towered over the realms around them for generations, blessing them with aether. This blessing of the Mothercrystals has allowed these realms to thrive, and their people to live in comfort.

Countless wars have been fought over the Mothercrystals all around the land, leading to the rise of nations such as the Grand Duchy of Rosaria, the Holy Empire of Sanbreque, the Kingdom of Waloed, the Dhalmekian Republic, and the Iron Kingdom, each with their own culture and ideology. Ongoing skirmishes have forged an uneasy peace between these nations, but with the emergence of the ruinous Blight, that fragile peace is starting to deteriorate.

Even without direct reference to the website’s realm blurbs (which contain a couple of snippets that have been crossed out as if this is some sort of CIA document, only furthering fan salivation) we can get a real feel for the setting of Final Fantasy XVI. Valisthea is, if not the planet, at least the extensive landmass upon which this story takes place. Have I mentioned this whole thing screams Ivalice? Heck, I mean, the Grand Duchy of Rosaria is like two steps removed from FFXII‘s Rozarrian Empire.

Meanwhile, the Mothercrystals strike me as a potentially mixed blessing. If there’s one thing I’ve learned playing JRPGs for over 20 years, stuff that lets people live in comfort is seldom beneficial in the long run. Is the Blight some sort of crystalline decay? Can Barret hear the cries of the Planet? Whatever the case may be, I’m left wondering just how many of these fantastic kingdoms and empires we’ll actually get to explore. I’ve come to expect fewer settlements to traverse from modern single-player Final Fantasy, but if there’s one producer over at Square Enix whom I can see pushing for a return to the township ways of old, it’s Yoshida.

Final Fantasy XVI is currently in development for the PlayStation 5. “The next big announcement” is slated for 2021, and we can’t wait to see you there. Take a look at several new pieces of artwork below in the meantime!

Still not liking the generic war between Euro nations thing they're doing. Its absolutely nothing new. FF could be so much more but they keep doing status quo. Asian and white culture mashed together and war and people fighting over summons and vowing revenge. There's other folklore out there. But they just dont care about that culture because it's easier to sell a game full of whites and asians.