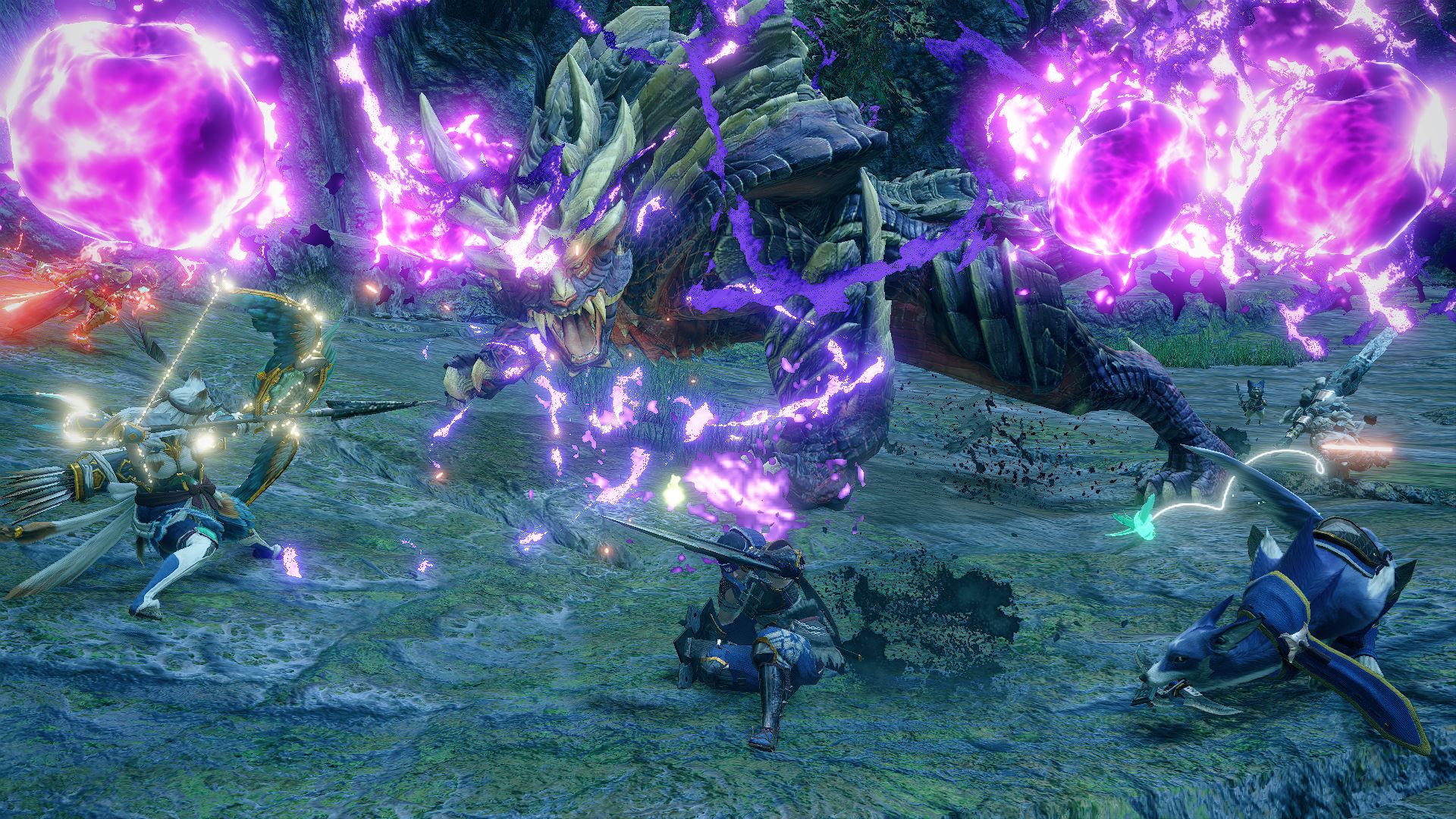 Monster Hunter Rise is just around the corner, and it’s shaping up to be an impressive showcase for the Switch as well as a promising evolution of the series. To make the wait a little more bearable, Capcom has released an update to the original demo released back in January. Make sure to give Eva’s Monster Hunter Rise Demo preview a look, as this demo is largely the same as the original save for one angry monster clad in purple flames. Players can either update their original demo or simply download it from the Nintendo eShop. Updating to Version 2 allows players to battle one of the most difficult demo/beta bosses yet: Magnamalo.

This flagship monster for Monster Hunter Rise gets its time in the spotlight with a new advanced quest available right from the same menu we found Great Izuchi and Mizutsune in. Players can tackle this ferocious beast solo (with the help of some furry friends) or they can put together a team of up to four hunters to test their blades and might against the malicious Magnamalo. As this is still just a demo, many features from the full game aren’t available, such as the online hubs, Switch Skill system, smithing, and so on. With only preset gear at your disposal and a lack of any armor skills, the battle with Magnamalo is bound to be a knockdown, drag-out fight that will test your skill as a hunter.

To put it lightly, Magnamalo hits hard. This creature is a bit overtuned, often two-shotting and one-shotting hunters before they even know what hit them. While Magnamalo feels a bit overpowered and the gearsets aren’t anything to write home about, this monster does fight fair. Each of its moves are telegraphed quite overtly, and after getting swiped by a few of his feints, players will quickly learn just what’s safe and what is a deathtrap. One thing this fight teaches players is the importance of exploration. With a mere fifteen minutes to fell this terrible creature, asking players to roam around the map may seem like a ludicrous request, but trust me, it can mean the difference between victory and defeat.

In most Monster Hunter games, players prepare themselves before a hunt by managing their gear loadouts, item sets, skills, and food buffs. As much of these preparations are tossed out the window for the sake of a short vertical slice in the demo, the best way to improve one’s chances to crush this foe is simply to explore. In Monster Hunter: World, endemic life granted some bonuses here and there as players tracked and trailed beasts on foot or on mount. In Rise, endemic life feels so much more important. Thanks to the short time limit and numerous other restrictions, the flora and fauna of the map really shine a light on just how helpful the environment can be.

Scattered throughout the map are numerous Spiribirds — adorably chubby, glowing little birds that increase the player’s health, stamina, attack, or defense for the duration of the quest. In the full game, the player’s Petalace accessory will determine the duration and increase to the aforementioned stats. While the effect in the demo is small, it’s incredibly helpful for the battle ahead. Along with the Spiribirds are the Clothflies, which give a temporary boost to armor. Additional boosts via items such as Adamant Seeds will help you survive your bout with the furious Magnamalo, but before drawing your blade and starting the battle, consider watching the creature for a moment. As Magnamalo moves from area to area, it may cross over some terrain you hadn’t quite considered climbing. A simple shimmy up some vines alone or using your hound to quickly dash up them may get you access to a number of Spiribirds and other endemic life.

Alongside the more stationary endemic life, the ever-helpful and (usually) appreciated toads make a return. In World, kicking a toad in the middle of a fight would cause it to expel gas that may paralyze, poison, or even put an enemy to sleep. Granted, this effect could hit players too, but it was still a crucial tool in felling some creatures early on. Unfortunately, these helpful/harmful little buddies were immobile, forcing players to drag fights over to their location if they didn’t simply stumble upon these creatures. In Rise, players have a cage that can hold up to five creatures found around the map. So toads can now be stored in the cage until the end of the hunt, allowing players to place them wherever they wish in the middle of combat.

All of this endemic life littered about the map is incredibly helpful when it comes to taking down Magnamalo. The attack and defense buffs are just enough of a boost to survive what might otherwise be a one-shot, the blast toads and thunder beetles give hunters an edge in the fight by providing knockdowns or blights on the creature, and the additional wireflies can be both a defensive and offensive blessing. Throughout all of my time with Monster Hunter: World, I hadn’t considered just how beneficial the endemic life around me would have been if it were more fully realized as it is in Rise. Thanks to the added pressure of the short time limit and the fearsome stats of the flagship monster, players have to get creative and learn more about the maps they hunt in, thus further integrating themselves into these breathing and thriving ecosystems.

With all of this running around to collect birds, bugs, frogs, and plants, another feature of Rise is quickly highlighted: mobility. Thanks to your trusty canine friend — called a Palamute — you can cross maps at high speed, drift around corners as if in a go kart, and swiftly climb massive vine-covered walls that would otherwise take half a minute to scale. The ability to call your Palamute to your side in the middle of battle creates another quality of life increase that eliminates downtime. Being able to quickly heal, sharpen weapons, chug drinks for buffs, or even just put a bit of distance between yourself and the monster — the Palamute immediately makes a case for why it’s such a wonderful addition to the series.

All of the added features in Monster Hunter Rise help make it feel like one of the fastest, most aggressive, and most mobile games in the series. Those who decided to dive into this series with Monster Hunter: World will find plenty of great additions to look forward to once Rise releases on March 26th for Nintendo Switch and 2022 for PC. The style, aesthetic, and numerous quality of life additions on top of the bevy introduced in World make this an exciting title that I can’t wait to get my hands on. As someone who has spent just over six hundred hours in World and the Iceborne expansion, I’m eager to drop another couple hundred (or more) into the next evolution of Monster Hunter.