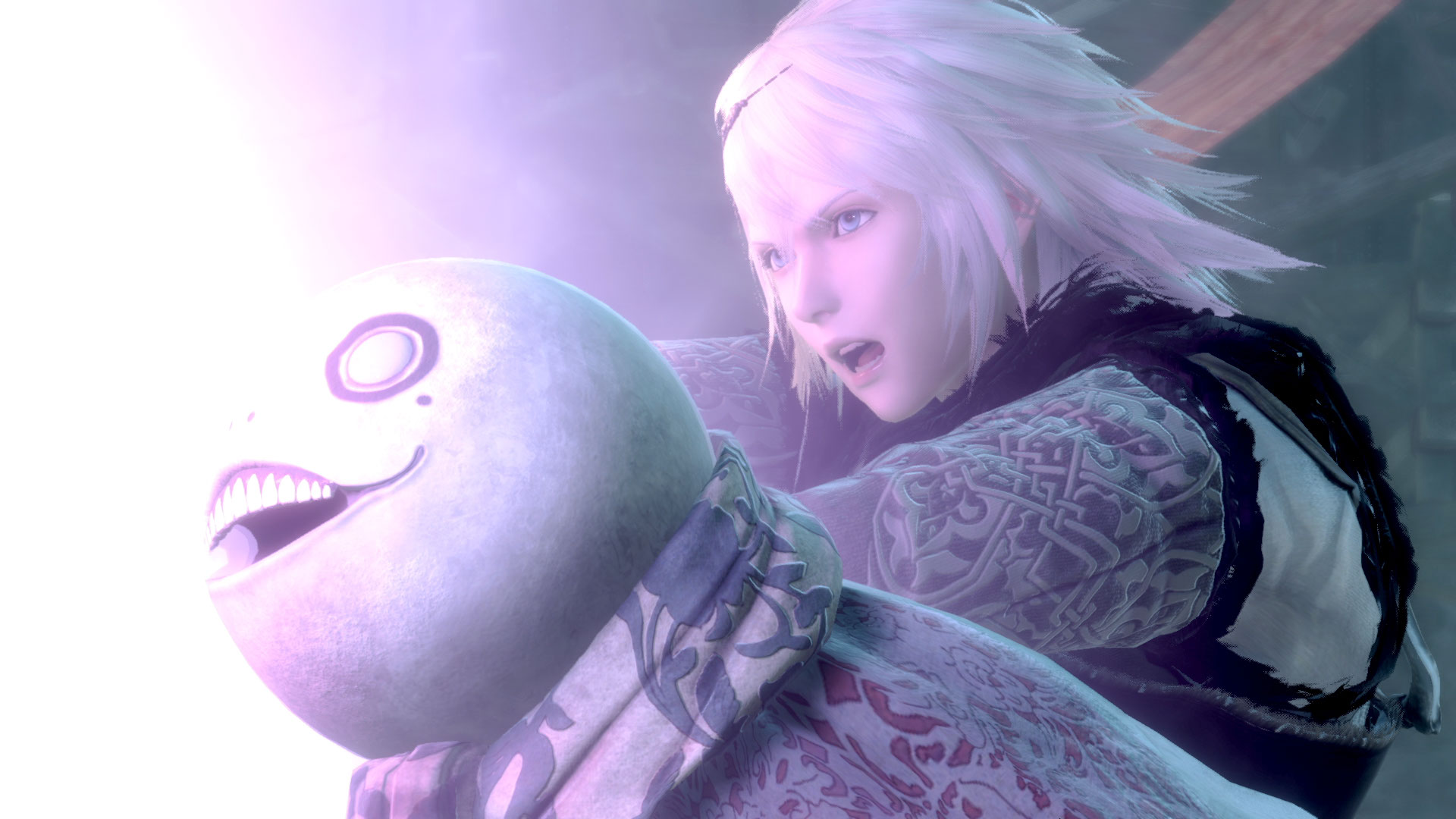 I try to keep certain constants in my workspace, like an Eevee figurine and a stack of quarters I’ll never remember to spend. They help to ground me in the here and now. Trouble is, I’m that much more shocked when I realize it’s almost May. Time slips past me when life is characterized by norms like these.

That’s why I’ve decided I’m going to completely redecorate my office. Out with the old, in with the new. Bye, 2018 aesthetic. Hello gorgeous, 2021. I’m even going to cover the wall in posters from recent and upcoming RPGs, all the better to remind myself that Octopath Traveler is great and all, but it’s also three years old. It’s no longer new. Its poster has its place of honor in my bedroom. But not here. Not in this sacred office space, which will soon be repping Bravely Default II and Final Fantasy XVI instead.

But let’s not get ahead of ourselves. We have a nice, plump week here. Several RPGs are hitting the streets, including one which has to win the award for most digits ever included in the title of a video game, right? I mean, if it doesn’t, pray tell me what did, because I need to know. I cannot sleep without knowing.

Let’s start with the elephant in the room: if you’re buying this, be prepared to fork over a fair bit of cash. Here in the United States, it’s $90 everywhere except the Switch, which is $80 for a limited time… before hiking back to $90. That’s the bad news. There are two pieces of good news, though! To start with, you can also buy the games separately on every storefront, so if you’re not convinced ahead of time that you’re going to like them enough to justify spending so much money, just grab the first entry and go from there. The other good news is that there are some snazzy enhancements on display for each title. Atelier Sophie: The Alchemist of the Mysterious Book began this loosely connected trilogy of RPGs, and returning fans can look forward to new character-centric story episodes, all previously released DLC, three new cauldrons, and more. Similarly, Atelier Firis: The Alchemist and the Mysterious Journey touts four new vehicles, all previously-released DLC, and a bold new quest to defeat seven monsters and the powered-up form of a certain foe. Lastly, Atelier Lydie & Suelle: The Alchemists and the Mysterious Paintings gets new paintings, a bonus world, and you guessed it — all previously-released DLC. The Mysterious trilogy isn’t the most popular branch of the Atelier franchise, nor did the games sell particularly well even in Japan. It’s good to see them offered a second pass at life like this. And if you’re curious if these games are a good entry point to the Atelier series, I’ve got a feature for you!

Infinite Adventures debuted on Steam back in 2018. Although it only has 72 reviews even three years later, they’re mostly rather positive, indicating that this is one of those RPGs that just hasn’t found great momentum yet despite its solid quality. Considering just how many units the Nintendo Switch has sold, it’s not impossible that developer Stormseeker Games will achieve greater notoriety when the game hits the eShop this week. But enough armchair financial analysis from a games journalist who’s so out of the loop I don’t even understand bitcoin; let’s talk about the game itself. You take on the role of the Traveler, but not the one from Star Trek: The Next Generation, which is probably for the best because that guy’s stuck with Wesley Crusher for the rest of his life, no joke. No, this Traveler is a hero with a forgotten memory. Which I guess makes you one of dozens upon dozens of RPG heroes, because I just had to go there. Moving on! You’ll explore 24 levels across a vast dungeon, engage with over 40 NPCs, dabble in over 260 skills and 24 summons to master… and face evil-doers who sort of look like they’re failing at dabbing if the above screenshot is anything to judge by. I unironically hope that it is.

We Are The Caretakers (Early Access) – April 22nd (Windows)

I think I fell in love with this one the instant I learned that 10% of its net revenue is going to be donated to the Wildlife Conservation Network’s Rhino Recovery Fund. That’s awesome, right? And it’s a prime example of putting your money where your heart is, because it’s obvious that the people working at publisher/developer Heart Shaped Games are passionate about a great cause. We Are The Caretakers, which is deliberately entering Early Access on Earth Day (!), is a sci-fi, turn-based, tactical role-playing game with a distinctive afrofuturist vibe. The big picture behind the game’s story, which is always fun but seldom original, is that you’re defending the world against an extraterrestrial threat. It’s the way in which Heart Shaped Games is framing that story that counts. You’re not just saving the world; you’re focusing on protecting the wildlife that your culture relies upon for sustenance and companionship. That’s the sort of focus that I feel like the gaming medium could use more of, because it reminds folks that humanity isn’t the only species worth surviving exoplanetary invasions. Former Activision-Blizzard artist Anthony Jones has crafted a vibrant, painterly style that I bet is going to sync nicely with We Are The Caretakers‘ core message of empathy. I could be off-base here. It’s always possible the game’s a dud. But that would be a serious shame, because thematically speaking, I’m sold.

The phrase “toys-to-life” is used in reference to video games that feature interactivity with figurines. There was a big boom a while back with games like Skylanders and the ill-fated Disney Infinity. (I own a few Star Wars figures from that one, not because I had any interest in the game itself, but because they started selling for pennies on the dollar once development ended on it.) The biggest ongoing example is amiibo, which I may or may not be obsessed with. What does any of this have to do with Dungeon and Gravestone? Arguably, nothing. But when I look at the game’s graphics, two things spring to mind. The stunning 2019 remake of The Legend of Zelda: Link’s Awakening, and what would happen if somebody collected a bunch of toys-to-life figurines and made them fight in a dungeon chock full of gravestones. Fitting. Dungeon and Gravestone is a roguelike, which means you’ll likely encounter the game over screen many, many times. It also means that if the whimsical presentation clicks with you and the mechanics are fun, you may be drawn in by the allure of mastering a challenging journey. To be honest with you, I just want to pick up all the characters and smash them into each other while I make ridiculous whooshing sounds, because my inner five-year-old misses that kind of thing.

Judgment is coming to next-gen consoles! Or should I be calling them current-gen consoles now? It doesn’t feel right yet. Too soon, you know? But I guess it’s true, so I’m going to go ahead and start saying it. Ahem. Judgment is coming to current-gen consoles! It’s also coming to Stadia, which, yay? (Why is it that Stadia seems to be gaining more support now, after Google has shuttered its own internal studios? What is this madness?) Our very own Zach Wilkerson rather enjoyed Judgment when it originally released for PS4, albeit with some reservations about the story’s momentum, the shallow detective elements, and some visible slowdown between scenes. While it’s doubtful that the story and detective woes will be amended, the lag surely will be — the new version will run at a silky-smooth 60 frames per second, with significantly improved load times. It will also include the original version’s DLCs as well as more collectible parts for use in the drone racing minigame. Wait, drone racing minigame? Let me pose a question, dear readers: what’s a Yakuza without wacky minigames, and what is Judgment if not a Yakuza?

Some weeks, we don’t really have a blatantly apparent big-ticket RPG release. Some weeks, we have several! This week, we have just one, and with all due respect to every prior entry on this list, NieR Replicant ver.1.22474487139… is the star of the show. A gorgeous remaster of NieR Replicant — the Japanese version of 2010’s excellent NieR, which featured a younger protagonist than the international NieR Gestalt — this has darn near everybody at RPGFan salivating, and for good reason. We live in an age when the NieR series has exploded in popularity, courtesy of 2017’s popular, spectacular NieR: Automata. But the original NieR never enjoyed nearly so much success, so it’s reasonable that Square Enix and developer ToyLogic have chosen to revamp the remaster’s combat system to fall more in line with Automata‘s. This can only mean good things, because Automata‘s combat is a big part of why it’s such a hit and NieR‘s is partly why it wasn’t. The marriage between the faster-paced and harder-hitting battles of the second game with the unforgettable world and atmosphere of the first is quite possibly the RPG Royal Wedding of the year. The prettier graphics and star-studded cast are icing on the wedding cake.

Do any of this week’s releases call to you like a siren to a sailor at sea? Or will you keep on paddling as you await the games still lingering on the horizon? Do you have any clue as to why I’m suddenly speaking in nautical metaphors? Because I don’t.

Let me leave you all with a powerful message I received tonight from a delicious fortune cookie.

Nothing. Absolutely nothing. My fortune cookie was empty. I hate this.