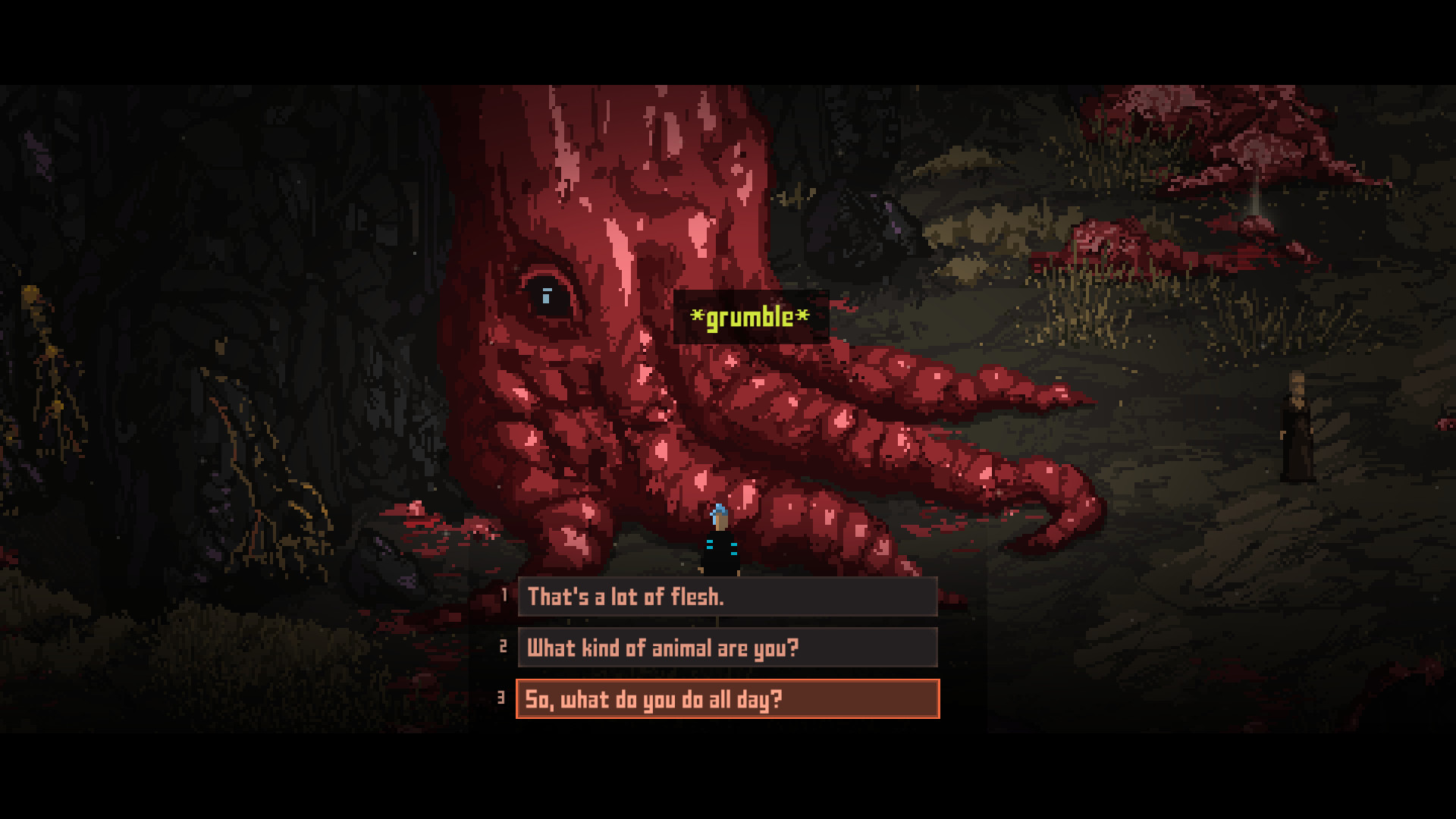 Among the indie games showcased during this year’s Summer Game Fest, Death Trash called out to me like a horror from beyond the cosmos. If you saw Tyler Trosper’s article on the game’s latest trailer, the adjectives he used to describe it were “disgusting,” “gross,” and “grotesque.” After checking out the demo released as part of Steam Next Fest, I couldn’t have put it better myself. The developers, Crafting Legends, are not masking their intentions but proudly displaying the filthiness of the world they’ve created. Yet, hidden underneath the muck lies a surprisingly old-school RPG and a weirdly charming (even profound) hellscape worth exploring.

Picture the glory and majesty of the beautiful, vast fantasy worlds of The Elder Scrolls games. Then, toss those grandiose notions into the garbage. Aesthetically, Death Trash is the absolute opposite of that, taking place in a unique, gritty, post-cyberpunk, post-apocalyptic setting dotted by numerous pools of red liquid. In this world, you wander around, chomping on raw meat that apparently grows out of the ground while trying to avoid getting your head bashed in by mutants, and then puke when the situation calls for it. But in terms of structure, fans of Western CRPGs like Skyrim will find under the hood a familiar, traditional engine with stat building, item crafting, and a notebook that fills up with (admittedly strange) quests.

Make no mistake, you already know whether or not this game is for you just by looking at the screens, the Steam page, even just the title. If Death Trash spotted a mud puddle on the street, it would dive in headfirst and lap up the dirty water. If you’re immediately disgusted by the visuals of this game, your gut feeling is probably telling you that you won’t enjoy playing it. On the other hand, if you like what you see, then one person’s trash may be your treasure, and you should keep an eye on this one.

Robots are in charge on the planet Nexus, and people live gathered together loosely in packs. You emerge from a cage, and you’re set loose upon these cursed lands to do what you will. The interactions I had with other characters and the overall vibe were oddly warm, inviting, and good-humored, not gloomy or misanthropic, despite what the game’s aesthetic might suggest. Who could turn down helping out the gargantuan “Flesh Kraken” who just wants you to bring him a friend? And I was instantly on board with allowing scientists to experiment on me in their efforts to make sense of this bizarre land. Of course, you also have the option to just mow everyone down, as Death Trash seems to offer a lot of openness for how to approach interactions.

There’s also freedom in how you approach the frenetic action-oriented combat. There are tactical solutions to minimize how much hacking away at enemies you need to do. A typical strategy would involve a balance of melee and gun attacks to avoid getting too beat up and to conserve your limited ammo supply. Humans and mutants both hit hard, but using stun attacks can give you an edge, as can using the environment to your advantage. Or you can probably sneak by enemies if you choose stealth, though that wasn’t my approach. The fighting feels sharp and snug. I was a little put off by the twin-stick-style gunplay I saw in previews, but actually playing it felt manageable as I wasn’t beset by too many enemies at one time. The hearty thwack sound accompanying melee attacks makes combat feel satisfyingly impactful.

From the backgrounds to the characters, the game’s appearance harkens back to classic RPGs like the older Fallout games or even Secret of Evermore. The pixel art is all attractive in a repulsive sort of way, and it all looks quite unsanitary. The lands of the planet Nexus seem neglected, and they probably don’t smell too nice, with fleshworms squirming about everywhere. In the more populated areas, it’s common to see characters going about their tasks, making those places feel lived in — too bad for those people. But the few places I got to explore made me eager to visit the many other locations on the world map that weren’t ready for the demo.

Crafting Legends is absolutely on the right track. Even just in demo form, this game is a trip, and I can’t wait to explore more of the nasty planet Nexus. Again, I say, if you’re into all of this, Death Trash is entering Early Access on August 5th on Steam. The game will also eventually be available in full release on Nintendo Switch, PlayStation 4, and Xbox One. Now, venture forth and bathe yourself in the sludge!