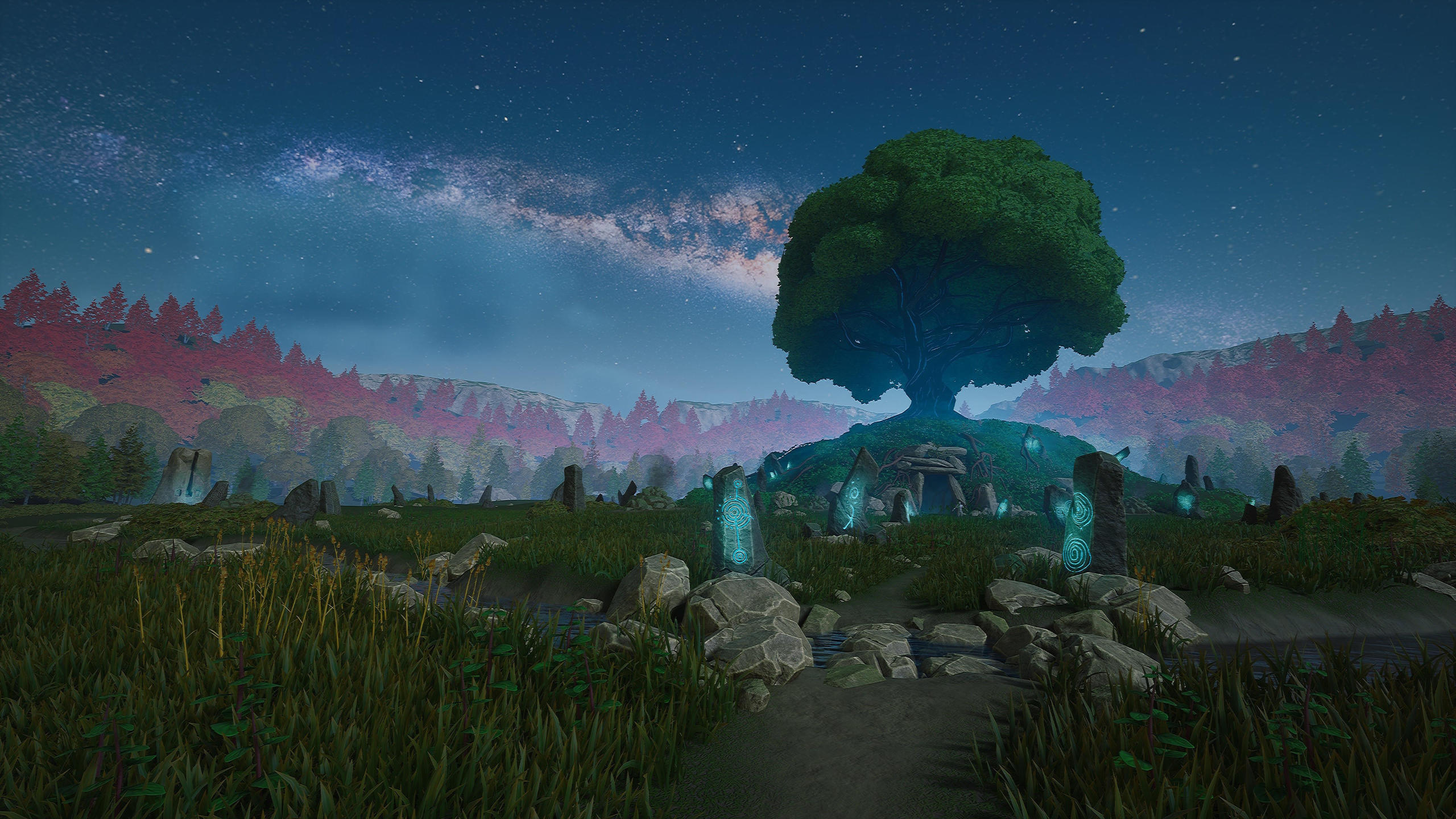 What’s your favorite RPG that features mecha to any degree whatsoever? Put another way, your pool can consist of stuff entirely built around giant robots, stuff that has some sort of giant robot cameo at best, and everything in-between.

It’s a weirdly broad category when I put it that way, and not even just because the internet will argue over what constitutes an RPG for the rest of time. You could get stuck in the weeds over it, like, “does XATM-092 from Final Fantasy VIII count, making that game eligible for consideration?” Sure, I’ll allow it. But who cares what I’ll allow — this is on you. Give it some thought, comment below, keep it to yourself, or schedule a public press conference so your entire sovereign nation has an answer.

As for myself, I’ll sprinkle my pick someplace in this week’s RPGs Coming This Week entries. It will be a forced reference, but a reference will be made.

We were rather close to a November release for The Waylanders. I even had a whole thing written. It was a weird rant about my attraction to Celtic myths. If I didn’t know any better, I’d say Gato Salvaje Studio pushed it back to force me to pen something nice and proper.

A party-based RPG with friends and allies both mortal and immortal in your ranks, The Waylanders has one heck of a voice cast, including Simon Templeman, Ash Sroka, and Hugh Quarshie. Toss in what sounds like a delicious Gaelic soundtrack, and at a bare minimum, I’m expecting good things for my ears to enjoy. The developers cite Dragon Age and Neverwinter Nights as inspirations. The latter tracks, and I can see its elements in The Waylanders’ framework. The former just reminds me we still know next to nothing about Dragon Age 4.

Dying Light 2 Stay Human (which completely eschews any perceived need for a colon in its title for reasons I can only assume are early-game story spoilers) is a sequel to a rather bleak game. A virus has wrought havoc upon the world — not that we know what that’s like these days. In a cynical sense, it’s all a setup to let players hit and shoot zombies all over again, but there’s some real nuance to Dying Light that’s worth checking out.

I’m hoping we find with the new one that all this unexpected time in the oven since the 2015 original pays off in more ways than just the gameplay. Don’t get me wrong, gameplay is the core of any video game. But a stronger cast and story that can marry that aforementioned nuance, that sounds like it’d get its hooks in me better than any zombie horde.

If you need a pitch for Dying Light 2 Stay Human that doesn’t involve my own rambling, here’s the deal: zombies are slow by day, swift by night. There’s a massive open world, and there’s a lot of parkour involved. And there are several factions whose respective fates can vary per your decisions throughout the campaign.

It would be kind of funny if Dying Light 2‘s paragraphs ended up down here instead. Like, look at that picture. It wouldn’t work at all. You’d know something was up. That’s what I love about video games — there are just so many kinds.

Land of Screens follows protagonist Holland on an adventure I think many of us could get behind. A social media nightmare scenario prompts her to cut the cord. (Wow, that’s an outdated phrase now.) After kicking aside all forms of social media, Holland embarks on a mission to discover what the world is like when your relationships with fellow humans occur in real life instead.

It’s a point-and-click escape, it has a lovely message, and it’s a game I fully intend to grab at launch. Land of Screens feels like it has the chance to become the bittersweet summary of all we’ve lost and gained as the world tilts ever-more-digitally.

Maglam Lord was pitched as a “magic sword creation action RPG” back when it was announced in September 2020. At the time, I remember thinking that D3 Publisher could have cut that down a bit. Now, I find myself wondering why they didn’t just come right out and call it a “magic sword creation action ridiculous comedy RPG.” From what I’ve seen of the imported version, this game takes itself about as seriously as Fei Fong Wong considers any and all of Citan Uzuki’s suggestions to chill the hell out for five minutes in Xenogears (which is a valid thing to type if you’ve read this week’s intro), good job, I love you.

I’ve had my eye on Maglam Lord chiefly because its key developers all had a hand in the excellent Summon Night series. Expect some hack-and-slash fights, a veritable wealth of crafting systems ranging from purely decorative to pretty dang powerful, and just enough dating sim elements for someone out there to claim it ripped off Persona 4.

My favorite thing about having an “Also Coming This Week” section is that it’s like you’ve forgotten your family still does stocking stuffers after you’ve opened all your presents, and your family are like “but there’s still a gift card in this abstract interpretation of a sock.” None of this has ever happened to me, but still.

Bad Faith is a visual novel with strong horror vibes and cartoonish character art that, I think, will make it seriously strange if and when these people start dropping to mysterious curses or whatever. If that’s the whole point, then I’m here for it.

Basically, if you want to own these games and you haven’t already gone and done so, this is how you amend that. And if you’re jamming ahead with your Stadia, this is your monthly wellness check-in.

Have you ever wanted to traipse through a dangerous forest, encountering magical creatures and slowly but surely moving toward one of several potential endings? One of the skeleton things in this game asks what you’re willing to do for salvation, so I don’t know. I bet this game is going to be really fun if you’re sipping rum from a bottle and clicking all over the place.

Strange and scary monsters do their best to fell the titular King of Heroes, or the guy who would one day be the King of Heroes, or maybe just some unaffiliated guy; it’s not very clear. You plan your combat moves four at a time, and everyone’s plans go off simultaneously, so that’s probably terrifying?

The title of this game makes me think of something that happens in Final Fantasy XIV, which, if nothing else, is a decent way to get my attention. Enjoy the (frankly disturbing) pixels-blended-with-real-photography art style that probably has a real name. Tell me what it’s called if so, thanks. Another click-and-pointer, but they’re always a welcome find.

I am of the mind that Pokémon Legends: Arceus is just about everything I wanted it to be. A shinier, more brilliant endeavor than those take-it-or-leave-it remakes we received just two short months ago. I still like Brilliant Diamond & Shining Pearl, but I feel like they’re fairly underwhelming relative to generational remakes Game Freak has brought to market in the past. HeartGold & SoulSilver remain in the upper echelon of many fans’ rankings for good reason, and even Omega Ruby & Alpha Sapphire feel more inspired.

But Legends, man, I hope this isn’t a total one-off. There are some growing pains, but the core product is such fun. I’ve had my roommates start files of their own far sooner than intended because they watched me play for a bit and couldn’t resist. I’m a pretty big fan of the Alolan games, but I’d say this newest entry is at least as good, if not better, than anything else they’ve launched in roughly a decade.

Perhaps you were expecting a broader outro. Instead, you got two paragraphs centered on a single game. Will I have even more to say about it next weekend? Probably, yes.

Happy Feb. 1, everybody!! Spring's just around the corner now!! (I tell myself this every winter day!!) My personal favorite mech RPG isn't a single game, it's the 3 part Xenosaga series. I really enjoyed them. I wish the Gears/Saga story had continued, but it doesn't look like it'll ever happen. My top PS2 RPG series.

Xenosaga's so good, Jbumi. <3 I would love to see an Episode IV. It bummed me out big-time when one of the producers informed the fandom that he'd tried to get remasters made to no avail! (I appreciate his openness, though.)

Yes, I remember reading that. I was very disappointed too. Sometimes, things make a comeback after being gone for quite a while, so I haven't completely given up hope yet for Episode IV!!