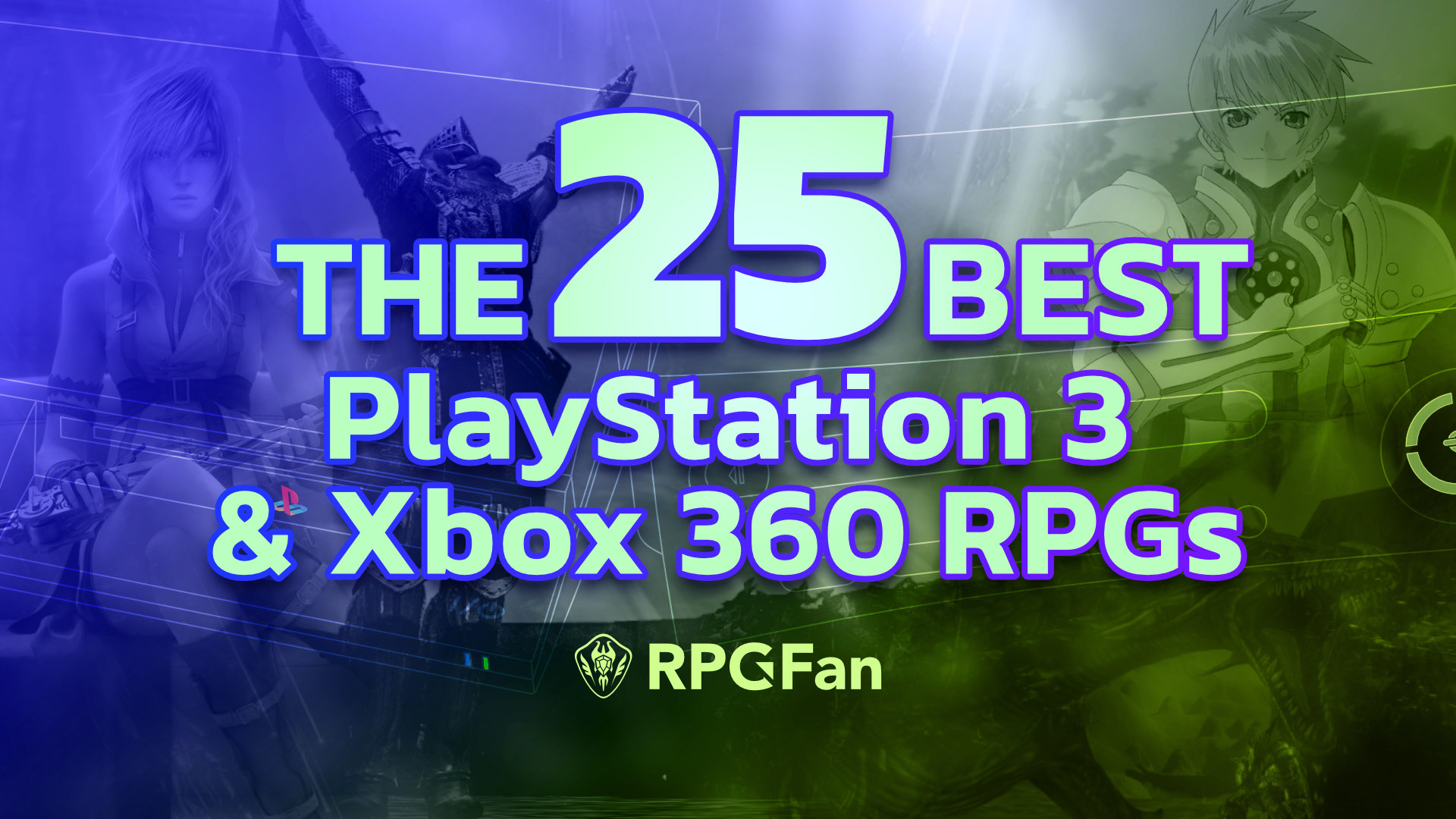 Many see the “PSWii60” era as a bit of a dark age for RPGs, and there’s certainly something to that. There were fewer releases and many developers, particularly in Japan, struggled to transition to HD.

Nonetheless, there were plenty of excellent games in the genre we love, and some of them are downright classics. And we thought it was important to recognize them.

We recognize that many of these releases saw releases elsewhere, such as PC or the PS4. Many of them have superior remasters available on modern platforms. Nonetheless, this is the method we chose.

What do you think the best games released for the PS3 and 360 are? What did we miss?  Be sure to let us know on either Twitter, Facebook, Instagram, Discord, or however you most enjoy interacting with us!

Top 10 RPGs on Both Platforms

Dragon Age: Origins is the result of BioWare losing the Dungeons & Dragons license. Having a wealth of experience in creating fantasy RPGs, BioWare set out to make their own world, and with David Gaider at the helm, it was clear we’d be in for quite a ride. Having published two novels in the Dragon Age universe (one prior to release), Gaider’s vision for a war-torn fantasy universe sank its teeth into me immediately. The worldbuilding of Dragon Age: Origins is stellar, inviting players to explore the physical realm and the dream-like realm of the fade. The game is incredibly ambitious, offering six separate origin stories for you to choose from, allowing you to fully play through your character’s backstory. Likewise, many conditions can affect the game’s epilogue, providing a different experience for every completion. Dragon Age: Origins also offers a battle system that allows things to play out in real time or a pause/command setup to plan attacks carefully. Dragon Age: Origins is one of my favorite RPG experiences of all time.

The original Mass Effect introduced us to BioWare’s interpretation of a future Milky Way galaxy, with humans as newcomers to a multi-species society of faster-than-light travelers. When you begin Mass Effect 2, introductions are mostly over, you are aware of the conflict threatening this beautiful universe, and Commander Shepard has a lot of work to do.

Mass Effect 2’s spider web of plot threads and character relationships can twist and turn with Shepard’s decisions, especially as you earn your team’s loyalty in character-specific missions as you prepare to take on the galaxy-ending threat of the Reapers. ME2 gives us one of the most fascinating and diverse casts of characters in any RPG of its era and delivers brilliant dialogue, intense shootouts, and scads of optional content over its runtime.

Mass Effect was a science fiction phenomenon of its time. The whole trilogy comes highly recommended, and Mass Effect 2 is the pinnacle.

On so many levels, NieR defies first impressions. Graphically, it’s about on par with a PlayStation 2 game, saddled with muddy, desaturated textures and overabundant bloom. The world design is bland and feels constricted. Not even the box art stands out.

What, then, makes this action RPG one of the best of its generation? Well, NieR isn’t just an action RPG. You’ll find it has its toes in three or four other genres; the gameplay will surprise and engage you even if it might not excel at any one thing. Of course, the polar opposite can be said about its soundtrack, an emotional and inventive tour de force that many consider among the best ever made.

NieR’s narrative goes hand-in-hand with its music, often wielding the latter like a club to your gut. At times, all it will take to break you will be the slow swell of a cello or a gentle croon as an unthinkable tragedy unfolds before your eyes. This is a story written by someone with something to say about humanity and suffering, especially for those at the margins. NieR examines our capacity for empathy and kindness against all odds, and that makes it essential.

Final Fantasy XIII is a visual feast for the eyes that tells the story of a mismatched band of heroes combating their fate. It doesn’t always exceed in its grandiose effort, but when it manages to hit those notes, the game is enjoyable. The main cast has some truly memorable characters (who can forget the likes of Lightning, Hope, Sazh, Vanille, and Fang?), and while it takes a while to hit its stride, the trek through Gran Pulse and the game’s subsequent ending prove just how much potential this world holds.

FFXIII has amazing music, graphics that continue to impress to this day, over-the-top action sequences, and one of the best uses of the ATB system that I’ve ever experienced. Despite being a victim of overhyping and a rushed development cycle, what lies at FFXIII‘s core is a solid RPG experience that is still worth playing.

To the modern gamer, the first Dark Souls game is easily accessible on their chosen platform, with “modern” being the keyword here. However, the game’s ambitious scope was perhaps too much on its home consoles of the PS3 and Xbox 360, and places such as the infamous Blight Town were all the more difficult due to performance issues. Despite this, Dark Souls remains a pivotal moment in the PS3/360 era of gaming, and its macabre storytelling, atmosphere, and challenging gameplay mechanics spawned its own subgenre.

Subsequent entries in the Dark Souls series may have introduced quality-of-life features such as more readily-available Fast Travel, but its original core concepts and mechanics are relatively unchanged; a testament to the first game’s high standards. We were also treated to the dark side of series composer Motoi Sakuraba, who blessed us with some true masterpieces, such as Ornstein and Smough’s theme.

Final Fantasy XIII-2 followed up a very divisive game with the risky proposition of being a direct sequel. Thankfully, it manages to iron out many of the kinks of its predecessor. Rather than taking a score of hours to offer you most of the pieces of a decidedly awesome take on ATB, Final Fantasy XIII-2 gives you access to everything you need from the word go. Plus, a nifty monster-catching mechanic to round out your party at three members. There is nothing like fighting alongside your pal, Chocobo.

In this second instalment, the story focuses on the likeable duo of Serah and Noel the whole way through. There is no splitting of the party here. Time travel also plays a significant role, a concept that works surprisingly well in video games. Best of all, Caius, one of the greatest villains in the illustrious series’ long history, ties everything together with a bow.

Resonance of Fate feels like the Cowboy Bebop of JRPGs. It focuses on a small cast of mercenaries trying to make a living by doing increasingly dangerous odd jobs. Though their shady and troubled pasts nip at their heels, their interactions with each other and the people around them make the cast as lovable as they are lethal. While there is a secret cabal doing cryptic stuff in the background, the scenes of shadowy baddies musing about the nature of God sprinkled in while the party deals with eccentric weirdos creates a wonderfully dissonant and fractured story that comes together perfectly.

Much like Cowboy Bebop, Resonance of Fate has both style and flair. Flashy gun battles, impeccable fashion, and a grimy soundtrack create an atmosphere that is simply too good to ignore. As a result, it’s one of the best JRPGs of the PS3/360 generation, and certainly one of the most unique.

While Fallout 3 gave the series a new appearance and excellent vibes, it wasn’t until Fallout: New Vegas that I felt the new look for Fallout was fully realized. Even with the loads of cut content and console version misgivings that game director Josh Sawyer would later reveal, it still stands as a touchstone for the series. Taking place in the Mojave Desert, Fallout: New Vegas presents a large and interesting cast of characters, locations with plenty of environmental storytelling, and a fascinating narrative that has stuck with me for over a decade. I’ll never forget the lottery in Nipton, launching a ghoul cult into space using REPCONN rockets, or the first time I ever set foot in Caesar’s camp. I’d also like to give a special shout-out to the New Vegas DLCs. All the story-DLC content was absolutely stellar and well worth the price of admission.

Often overlooked compared to its successor, Mass Effect is most fun on a revisit. On release, I was blown away by what Mass Effect has to offer: a cinematic RPG experience that features a fully-realized sci-fi experience with coherent storytelling, interesting characters, and a battle system that will make you pull your hair out. From the moment you land on Eden Prime, you begin to see the threads unfolding about what’s currently happening in the galaxy. Mass Effect doesn’t just offer a great setting and foundation for what the series would become; it’s a truly excellent game in its own right. I will never forget Commander Shepard being inducted as a Spectre, making a not-so-difficult decision on Virmire, and fighting my way up the side of the citadel in an absolutely stunning set-piece. I will always prop up Mass Effect as my favorite of the series, and definitely worth a revisit if you haven’t in a while.

At times, Dragon’s Dogma feels like a fever dream. How could an open-world RPG get so many things right where so many other games still struggle?

Combat, often a failing for other open worlds, is the highlight of Dragon’s Dogma. You can latch on a griffin and ride it into the air, put out the eye of a cyclops with an arrow, conjure massive tornadoes to send your foes spiralling, or live out your fantasies as a clone of Berserk’s Guts, swinging an immense slab of metal with abandon. These feats are all made possible by the game’s deep class system, which lets you become everything from an Assassin to a Magick Archer. To balance out your party, you invite along Pawns, one which you create yourself and two more created by other players, including your friends. And you will want powerful allies, for Dragon’s Dogma’s dungeons are deeply dangerous, and its nights truly dark.

Don’t let Dragon’s Dogma’s reputation for having a story that is both goofy and bland deter you from giving it a try either — all in all, it pulls you along effortlessly to reach a climax that ends on a notable high.