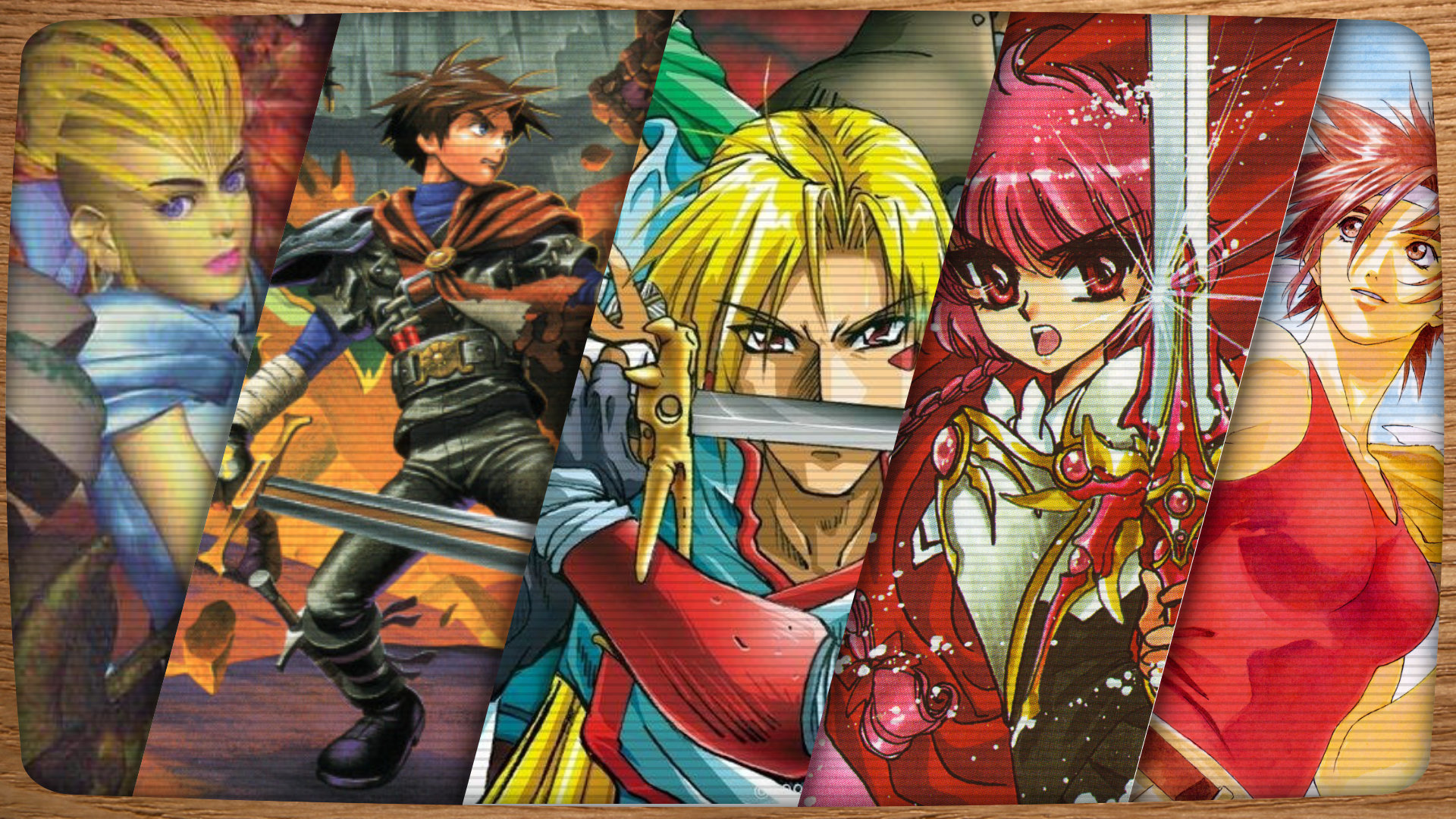 The Saturn is a criminally overlooked system, all of which is SEGA’s own fault. Despite having an incredible library—much of which has never been ported to newer consoles or PC—SEGA of Japan absolutely screwed the pooch for SEGA of America, forcing them to launch the console early and without notice to retailers. It was the second nail in SEGA’s console coffin after the forced, rushed development of the 32X, selling just 1.2 million units (compared with almost 40 million Sony PlayStations) in North America, and far too few people have had a chance to enjoy its bounty as a result.

And it’s my job to correct that!

Just for you, my special friends who enjoy a parasocial relationship with me via this column on the internet, I’ve put together a list of the top 5 RPGs you should play on the Sega Saturn! These aren’t necessarily the ones you’ve heard of, either. Rather, they’re the ones I think demonstrate the uniqueness of the console and its power.

There’s no ranking here, just five solidly unique, fun games that offer something nice and meaty to bite into and that I really like.

Okay, Magic Knight Rayearth is a bit of a cheat in that it’s less of an RPG and more of a Zelda-esque adventure title. But we cover it, so I’m going to squeeze it in here! Magic Knight Rayearth is one of the best examples of 2D overhead sprite-based gaming. It’s glossy, it’s rich with texture and colour, and it’s a treat to play. It shows just how much the Saturn improved on the 16-bit era’s 2D adventures with a higher resolution and the ability to display millions of colours.

As a wee lad, I was blown away by how nice the giant character portraits were. Even in the 32-bit era, many games we got in North America focused less on bright, shiny anime art and a lot more on the dark and gritty 3D rendered stuff. Oh sure, you had exceptions like Lunar or Suikoden, but even then those were small, square deals within the bounds of the textbox. Not Magic Knight Rayearth! These buckos just leap right out atcha like they were from the anime!

MKR doesn’t do anything fancy with 3D effects or camera angles, but it’s a completely solid 2D adventure RPG, often overlooked for being an adaptation on the Saturn. It’s also the source of a once-mighty meme titled “Daring Screams,” which you can watch here.

Often overlooked for its cousins in the Shining Force series, Shining the Holy Ark is a prequel to the Shining Force III trilogy and represents the pinnacle of what the original “Shining” formula was supposed to look like. See, Shining didn’t start with Force, it started with Shining in the Darkness. It had more in common with Ultima or Wizardry than a tactical RPG, played from a first (and sometimes third) person perspective that had players crawling through dungeons one square at a time. Shining the Holy Ark takes that formula and drastically improves upon it, using pre-rendered sprites and CG cutscenes to create a presentation that was quite stunning for its time.

Although the game doesn’t directly connect its narrative to Shining Force III, it does give us the first appearance of Julian, who would go on to be one of the three main protagonists in the latter strategy title.

I actually played Shining the Holy Ark after I got through Shining Force III, intrigued by a friend who had told me about the Julian connection and showed me some of the then-spectacular 3D renders. I have a ton of fond memories of Shining the Holy Ark, and it gave me a love of first-person dungeon crawlers like Legend of Grimrock.

While it’s obviously not the game that kicked off the franchise, Sakura Taisen 2 is decidedly the better of the two games available for the Saturn. The majority of characters from the first game return, with some new international additions in the form of the Italian-Japanese Orihime Soletta and the German Reni Milchstraße.

If you’re ever going to choose one dating-sim-come-visual-novel, I strongly recommend Sakura Taisen 2. You can actually get by quite well with a summary of the first game and dive right into this one—provided you’re prepared to play with a translation open on a second screen if you don’t read Japanese. Sadly, this an essential part of this experience—one I had back in the early 2000s—though I’m hoping the Sakura Wars Translation Project will eventually announce work on ST2.

The cast is bigger, better developed, and the visuals more sophisticated all around. While the original is beautiful, I could tell from the beginning that there were some shortcuts here and there, some rookie pains on the developer’s part. Those are all smoothed over and repaired in part 2. While I was definitely in love with Sakura Taisen from the start, the sequel cemented it. The storytelling is far less typical, the villains more engaging, and the combat has been fleshed out enormously.

This one makes a lot of top lists, but I’m going to mention it here because I haven’t played another game quite like it. Where most real-time strategy games have you commanding troops from an overworld, and most strategy RPGs use a grid-based system, Dragon Force does neither. Instead, you move troops around a map and then cut to an army vs. army encounter reminiscent of the turn-based tactics title Advance Wars, but emphasizing formation control and special powers.

Troop types play a game of rock-paper-scissors, you can permanently lose your Generals if things go poorly, and the game does see a sudden difficulty spike in the last act, but it all comes together for a unique and unforgettable experience. What’s more, the presentation is slick, featuring some fantastic cutscenes for the time in that very mid-’90s shounen fantasy style reminiscent of Sorcerer Hunters and Slayers, as well as a touch of Magic Knight Rayearth.

Sadly, despite doing rather well—especially because of a Working Designs translation at the time—its sequel never saw a release outside of Japan, likely due to the Saturn’s looming twilight and SEGA of America’s official marching orders to stop translating RPGs. I remember gazing fondly at early screenshots of Dragon Force II in magazines, only for any promise of a Canadian release vanishing into thin air some months later.

For about the first hour of play, Dark Savior is not a good game. Its controls are some of the worst I’ve ever gotten used to. They’re not broken or overtly messy, but like its spiritual predecessor Landstalker, it only lets you walk in isometric directions (up-left, up-right, down-left, down-right) and… has a lot of jumping puzzles. Like, way too many (which I define as “more than one”). There are even some areas that are built for you to walk in a straight line left or right, but you… can’t. It’s a tough sell to many, and combined with being poorly marketed in North America, one of the more obscure games for the system. Heck, I didn’t get through it until 2008, and I bought the game in 2002! Patience is a virtue with Dark Savior, but it does thankfully pay off.

It’s one of the most unique RPGs from the era. Not only does it sport some lovely 3D environments (some of the nicest and least warp-y on the console), but it offers five “Parallels,” different stories within its world that branch off from the opening. What Parallel you end up in depends largely on how quickly and the manner in which you complete the opening chapter. A difference of slow or fast time on the clock—literally a countdown that runs through the opening—can land you in a completely different set of scenarios! Playing through them all is really neat and gives the game a lot more mileage than I initially thought it had.

A last note: Dark Savior is also—and I’m not joking here—kind of a fighting game. Most battles take place using one-on-one matches, and you can capture your enemies to use in future encounters, a bit like Pokémon. It’s a unique blend of ideas that you don’t see most other places, and is well worth checking out.

What? No Shining Force III? No Panzer Dragoon Saga? No Guardian Heroes? Not today, no. Those are all great games, but you’ve almost certainly heard of them. They make top lists all the time! They don’t need my help! Besides, a Flashback Friday Top 5 isn’t about the cream of the crop, it’s about what I think you should play because it’s got something unique to offer!

Hopefully, I’ve managed to convey just that. Happy gaming, and come back next time for your weekly dose of Friday nostalgia!