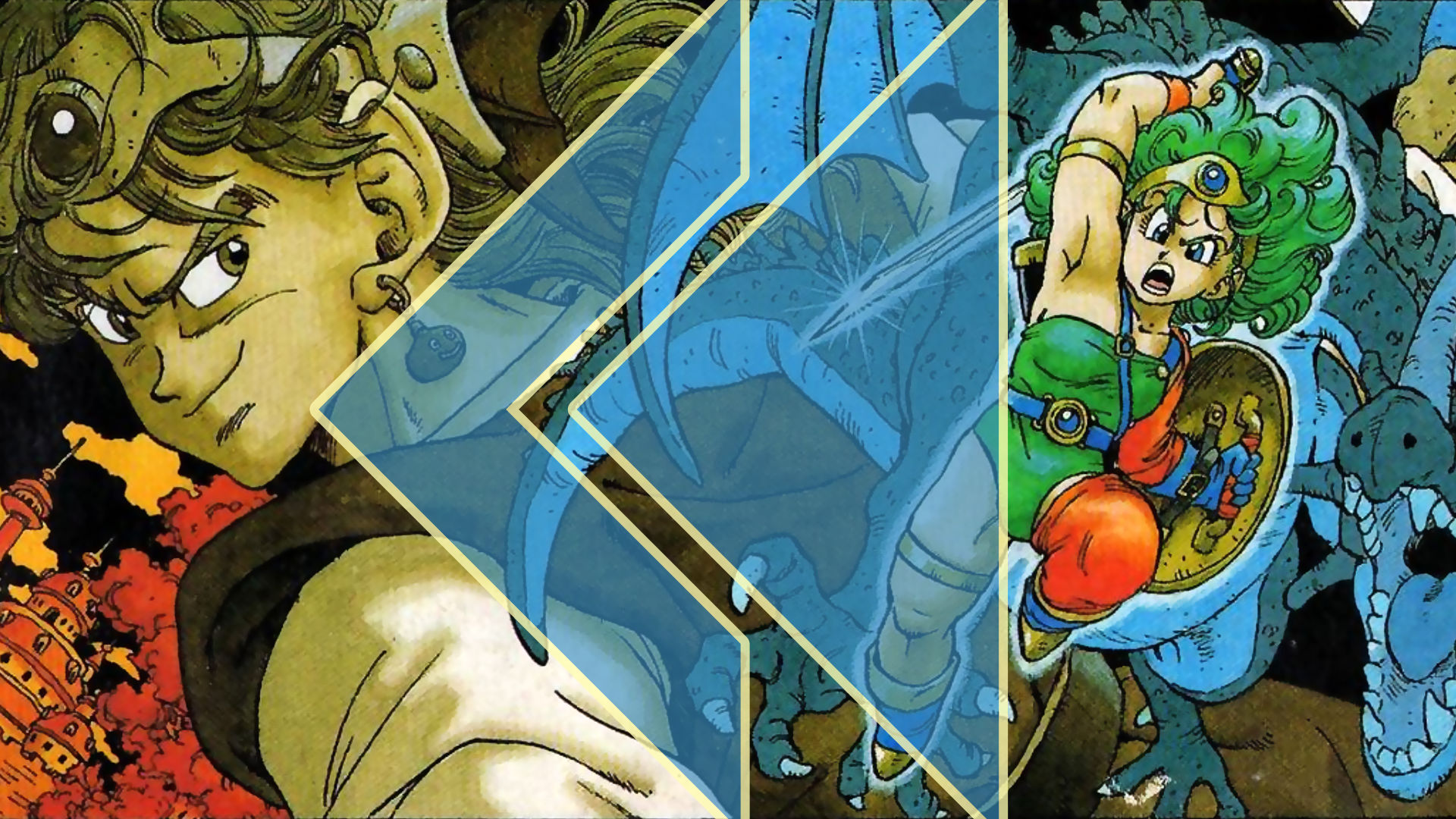 Prior to these episodes, I’d played four numbered Dragon Quest games, and two spin-offs. Nothing about Dragon Quest IV: Chapters of the Chosen should’ve been surprising, right? This is a series that has built its reputation on consistency, and Dragon Quest IV has all of those typical Dragon Quest hallmarks. And most of this game is exactly that! The basic, but addictive, turn-based combat is here (thank goodness every version after the NES fixed the AI) and I’m still addicted to killing metal slimes. The fantastic localisation of the DS version brings tons of charm. The fabulous puns and monster names, and the expressive Akira Toriyama art, is here too!

But it still surprised me.

For a 1990 NES RPG, Dragon Quest IV is bursting with personality. Splitting the first half of the game between the main hero’s companions is a stroke of genius. Travelling with Ragnar and Healie to get used to the basic mechanics felt just as fun as learning how to make money with the merchant Torneko. And I’m sorry, if you’re showing me a princess who punches a wall down within five minutes of meeting her, of course I’m going to fall in love with her. When I met up with these characters, I felt like I already knew them. The game is also much more open than I expected, as you can acquire most of the Zenithian Gear in any order, but progression isn’t too obtuse. Sometimes I had to talk to multiple different NPCs to make progress (even with a bit of help from a guide), but Zoom makes that task much more manageable.

It’s an incredibly forward-thinking game, from its structure to its more-relatable villain, and in a series that champions tradition, it makes this entry stand out even more. So while it’s simple fun on the surface, Dragon Quest IV is one of the most enjoyable and memorable NES games I’ve ever played, albeit through a DS remake ported to mobile. And not just because the hero Alana and princess Alena got to punch walls down together.

My foray into the world of Dragon Quest has been limited thus far, despite dearly enjoying my first two exposures to the clever and entertaining series. This was the perfect chance to finally start the Zenithia Trilogy after having collected all three DS remakes. So, I happily took the plunge.

Dragon Quest IV: Chapters of the Chosen didn’t disappoint! With it, I found a game with clever design and endearing characters that stands the test of time; it continually impressed me given the time of its initial release. Alena, the wall-punching princess, stole every scene she was in. As a twin myself, I also loved how Meena and Maya were presented! The heroine, and her wonderful design, was something I would’ve loved to have known about in the initial NES release since I was always looking to play as female characters when I was a little kid. There were also so many awesome mustaches to be found, along with the surprising depth of Psaro the Manslayer for a villain at the time of the game’s original release. That final, seven-phased battle vexed me for quite awhile before I found the Sage’s Stone and switched Kiryl into the party, but I literally cheered afterwards when I didn’t even need to rely on the Baron’s Bugle once to switch in new party members for the fight. Kabuff and Sap saved the day!

My smile didn’t stop as the ending scenes rolled either. In fact, it only widened with every reunion and with that final hug. Dragon Quest IV has certainly set the bar high for the rest of the Zenithia Trilogy, and I can hardly wait to experience more of the joy and wonder of DQ now!

I love Dragon Quest IV. I love Ragnar’s pink armor; I love Alena’s spunky attitude; I love the Heroine’s voluminous hair; I even love Torneko’s offbeat fundraising chapter. The only Dragon Quest IV thing I truly dislike is the inability to control your party members in the NES version, but thankfully that problem was rectified in every subsequent port of the game, including the DS version which I replayed earlier this month.

I think I said this about twenty times over these podcast episodes, but Dragon Quest IV feels far ahead of its time. The gimmick of meeting the hero’s companions over four dedicated story chapters is fun and interesting even in 2021, and the quest design and world map have a refreshing balance of narrative breadcrumbs and player freedom. Even when I was revisiting towns with no apparent story relevance in Chapter 5, there was always some clue hinting at something to do elsewhere in the world.

Dragon Quest IV is my favorite RPG for the NES, and not only because it’s the only one I had the patience to actually finish in its original version. DQIV is among Yuji Horii’s most successful story designs and contains one of the most likable casts that Akira Toriyama has ever drawn together. Replaying Dragon Quest IV in 2021 for the first time in over a decade, I was expecting to still enjoy it, but I appreciated its sophistication for its age even more. And I wouldn’t mind RPGs of the 2020s taking more cues from this 1990 classic: give players good fast travel options, less wasted space in the world map, and more hairstyles reminiscent of the 1980s.

Dragon Quest is a special series to me. Back when it was called Dragon Warrior in the West, in the hoary days of the NES, the first game in the series taught me to read. Before I knew the term “RPG,” the Dragon Quest games were the ones I tried to get my friends hooked on. I loved the series as a kid and I love it now, but none ever hit me quite like Dragon Quest IV.

Maybe it was that satisfying “new game loop” you got to experience five times in a row. Maybe it was the lovable cast in an era not known for noteworthy characters. Heck, maybe it was just the novelty of firing up a new game and finding myself in the boots of a rugged knight in pink armor. Whatever the reasons used to be, they’re all still present today, but they’re joined by so much more. A fascinating villain, a satisfying sense of problem solving, and a gorgeous remake elevate my childhood favorite and ensure it’s an irreplaceable treasure to me, even thirty years later.

Dragon Quest is famous as a series that doesn’t change. There are varying levels of truth to that, and at first it seems like a dunk on a repetitive series. But when you look at the modern era, the most recent entries like Dragon Quest XI still feel completely fresh. And that’s where the pieces start to connect—sure, the series has kept its core over the years. But that’s not out of a refusal to change. It’s because the series nailed it so well from the get-go. Dragon Quest IV feels modern in so many charming little ways, even in 2021, and the innovations in storytelling and exploration still feel relevant when echoed in the newest games. Dragon Quest IV might pinpoint exactly when Dragon Quest found its storytelling footing, and that core hasn’t remained steadfast out of a refusal to evolve. It’s remained because it’s just that good.

Plus, games are still struggling to make a character as perfect as Alena.

In many ways, Dragon Quest IV is the apex of the series on the NES. The game still maintains many of the open elements of the previous games, giving you the freedom to tackle elements of the story in any order. It’s still vital to talk to NPCs in towns to discover where you’re going. In its original form on the NES, you still fight enemies against a black background. It looks and feels similar to the previous three games, but it largely smooths the edges.

But Dragon Quest IV also adjusts so many aspects that it feels like the template that many RPGs for the SNES would build upon. The first four chapters wonderfully build the characters’ personalities, making us invested in them before they even meet the protagonist. The variety of these opening chapters is also particularly notable, going everywhere from the original Dragon Quest gameplay style to making us into the most delightful capitalist this side of Warren Buffet.

All of this feels like what the SNES does well–characters. Sure, we’re not even talking Final Fantasy IV levels of characterization, but each character feels like an actual person, even if only a collection of cliches in some cases. Although we tend to take it for granted in the genre today, it felt like a revelation back in the early 90s, and as a result, the game is still fresh and relevant today.