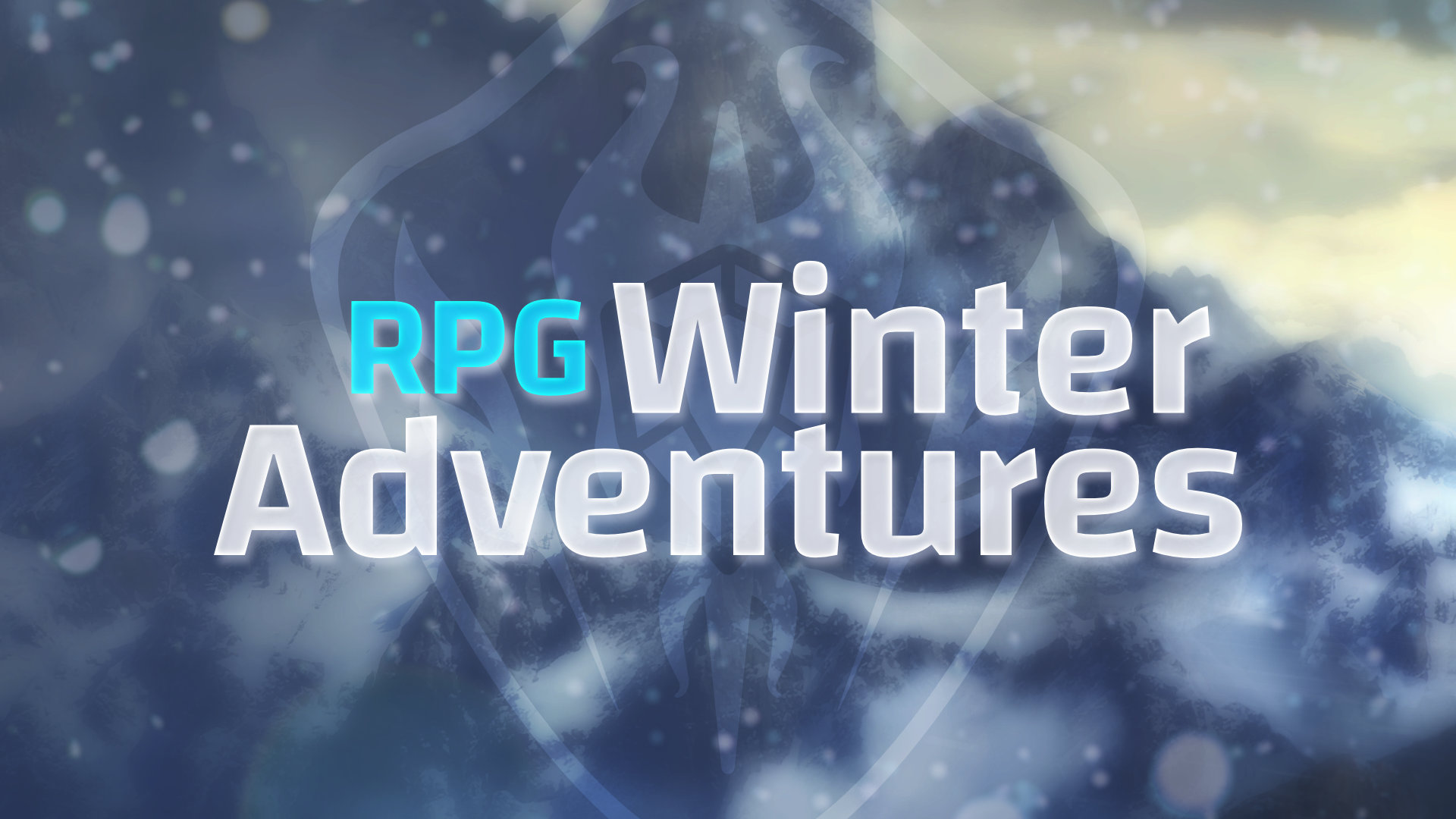 Important Question: If you were trapped in your living quarters during a blizzard and could choose only one video game to play in the meantime, what would it be?

Answer: Probably something on a portable system, as the blizzard would likely knock your power out, and you would end up sad, grumpy, and very cold.

Perhaps that is a bit of an extreme scenario. But provided this snowy weather leaves your electricity intact, we present you with this exciting list of winter-themed games (for a variety of systems) that are guaranteed to make you feel just as cold inside as it is outside. Settle in, grab a hot beverage of your choice, and don’t forget to put on your snow pants.

The debut title from Square Enix’s Tokyo RPG Factory, I am Setsuna takes you on a lengthy adventure through a land of infinite ice and snow. This 90s-inspired game isn’t perfect, but I personally found it to be a lovely time.

I am Setsuna borrows heavily from Chrono Trigger, especially in regard to the fun and fast-paced battle system. Unfortunately, the story hardly lives up to the SNES masterpiece. For one thing, I didn’t find the characters to be very memorable, with the exception of Nidr. (I have a soft spot for older, battle-weary swordsman characters. He really can’t compare to Auron though.)

Graphics-wise, the game gets a solid 7.5 out of 10 from me. The dungeons are nearly indistinguishable from one another visually; I realize they are all situated in a frozen, snowy environment, but more variety in the textures, colors, and architecture could have gone a long way. Most of the towns look fairly similar as well, though I loved the cozy ambience they presented. I can easily imagine myself staying at one of I am Setsuna‘s snug little inns, reading by the fireplace while a blizzard rages outside.

Despite the above-mentioned issues, I quite enjoyed this game. Although it was nothing extraordinary, I felt it was a satisfying first attempt from Square Enix’s Tokyo RPG Factory. Sadly, there has been no news of upcoming titles from this studio as of late (I am Setsuna and Lost Sphear being their only two games [Editor’s Note: Oninaki released in 2019]), but I hope we will see more from them in the future!

Read our I am Setsuna review…

The first two games in director Benoît Sokal’s Syberia trilogy are heralded as must-play classics for all devotees of graphic adventure games. I have yet to play the third; while it continues to feature many snow-covered winter landscapes in the tradition of the first two entries, the gameplay and control scheme have been revised, much to the disappointment of series fans.

The Syberia games follow the adventures of Kate Walker, a New York lawyer who finds herself on a journey to locate an eccentric missing inventor. The series overflows with steampunk-inspired locales, mysterious mechanical contraptions, and of course, enough snow to make you grab your winter coat and a nice warm toque.

While I definitely enjoyed the first two titles, I don’t believe either of them would make my top three graphic adventures list. On the positive side, the games feature gorgeous backdrops and an intriguing two-part storyline (please have a box of tissues handy for Syberia 2‘s particularly moving ending). Unfortunately, I found progress to be incredibly slow due to Kate’s sloth-like walking speed. Every little action I took turned into a leisurely stroll, and exploring some of the larger areas was particularly frustrating; thank goodness for the pleasant scenery!

Though they might be a bit of a slog for modern players, I would still recommend trying out the Syberia games just to experience the beautiful, frosty world and captivating plot. And if you happen to be a fan of steampunk machinery, that’s all the more reason to play!

The Elder Scrolls V: Skyrim takes a coveted spot on my list of “Top Five Games to Avoid Like the Plague When I Have a Busy Week Coming Up.” It’s a massive time sink and an unparalleled adventure through an incredible winter wonderland. I could spend hours, days, or maybe even weeks just puttering around looking for herbs, adding checkpoints to my map, and barging into the houses of complete strangers in order to dig through their bookshelves (tip: don’t do this in real life). I admit I haven’t even gotten very far in any of the major questlines by this point, despite putting several hours into the game already.

I love the variety and realism of the landscapes in this game: there’s an assortment of stunning locales, including run-down little villages hidden in the hills, caverns full of glowing mushrooms and/or angry skeletons, and bustling multi-levelled cities filled with shops, pubs, and farms featuring plenty of delicious and nutritious vegetables to put in your backpack. Basically, this is a game about stealing people’s stuff and collecting plants.

As far as the winter theme goes, Skyrim is guaranteed to make you want to turn up the thermostat. When you’ve spent several in-game (and probably real-life) hours traversing through those cold mountains and fields — avoiding giants and woolly mammoths, generally being annoyed by wolves, etc. — and finally come across a tiny little hamlet with a communal cookpot hanging above a warm fire…it’s a downright joy. Have a snowsuit handy when playing this one. I give it 10/10 icicles.

Tales of Aravorn: Seasons of the Wolf

While not always the focus of the game, the icy village of Ninim plays a central role in the worldbuilding of Tales of Aravorn: Seasons of the Wolf. Main characters Shea and Althea belong to a special subset of elves called Snow Elves that are born in the region, and their lineage helps them stand out in the slave pits of the desert land of Dingirra, where the game’s story initially takes place. Players learn more about the way of life in Ninim and its residents as the twins explain the twists of fate that put them in their current predicament.

Ninim is located in a tundra covered by snow and ice, and the wintry outfits of its residents as well as the beautiful landscapes and descriptive writing of this visual novel/RPG hybrid really help to bring the setting to life. The twins are strong characters, largely due to their upbringing in this harsh environment. The game eventually comes full circle as players return to the icy land of the twins’ birth, and the setting plays a large role in the DLC expansion “Bad Blood,” where defending the village and its precious resources is a major plot point and gameplay element.

Of course, as harsh and cold as Ninim is conveyed to be, Tales of Aravorn: Seasons of the Wolf does a great job portraying just how warm wintry settings can be beneath the surface, with some truly heartwarming familial scenes and extremely cozy romance moments with Althea or Shea’s chosen significant other.

Psychedelica of the Ashen Hawk

Psychedelica of the Ashen Hawk is set in an unnamed town that residents believe has been cursed by a witch to an eternal winter. Players take on the role of a young woman named Jed who disguises herself as a man in order to hide the fact that her right eye turns red when she gets upset: a sign, supposedly, of a witch that would most certainly mark her for death in the eyes of the superstitious townsfolk.

The wintry environment of the town permeates all factors of the game: from the beautiful, snow-laden landscapes and backgrounds players traverse, to the sound effects of snow crunching underfoot, to the heavy coats and clothing everyone wears to ward off the cold. Even the chilly disposition of the townspeople in regard to the witch and outsiders, as well as their complaints about the cold itself, help to convey the sense of a frigid, unchanging atmosphere. The tension in the air between the town’s two feuding clan factions threatens to break like ice at any moment, which creates a chilling, wintry tone, and descriptive writing further helps bring the setting to life.

As Jed tries to bring peace to the townsfolk and uncover the mystery behind the curse, all while keeping her own secrets, the endless winter town starts to feel very much like a character in its own right. As a result, Psychedelica of the Ashen Hawk is a perfect visual novel to play bundled up all nice and warm on a winter’s day.

Read our Psychedelica of the Ashen Hawk review…

Horizon Zero Dawn is an incredibly polished and insanely gorgeous action RPG that I will probably never stop talking about. It really is the complete package, and a little over eight months after its launch, developer Guerrilla Games released a meaty DLC expansion called The Frozen Wilds. As the name suggests, this expansion takes place in a frigid northern zone called The Cut. Frozen mountains and icy caves dot the landscape, connected by valleys and forests blanketed in a heavy helping of snow. Depending on the weather, protagonist Aloy can find herself in a veritable winter wonderland, trudging through snow drifts (that deform beautifully due to her movement) while fluffy, white clumps fall and sparkle around her.

As Aloy uncovers the details behind a mysterious curse afflicting the land, she encounters new enemies to defeat and wildlife to hunt, all appropriately themed for the cold, mountainous terrain. I thought my first encounter with a Thunderjaw in the main game was intense, but then I faced two giant bear-like machines called Frostclaws and quickly realized how wrong I was. Apart from the machines and critters, Aloy also meets plenty of new people, some of whom are happier to see her than others. The frosty reception she receives from some of the locals creates a narrative chill that echoes the expansion’s visuals, though in true hero style, she does eventually get people to warm up to her.

Like most DLC, The Frozen Wilds is not standalone content. It takes place alongside the events of the main game, and The Cut is a freely accessible region on the world map once players reach a certain threshold. As such, you will need the base game to play this expansion, and the rest of Horizon is mostly not wintry in nature. It is, however, absolutely excellent, and if you have not experienced it yet, you should check out the complete edition, which combines the main game and The Frozen Wilds in one affordable package.