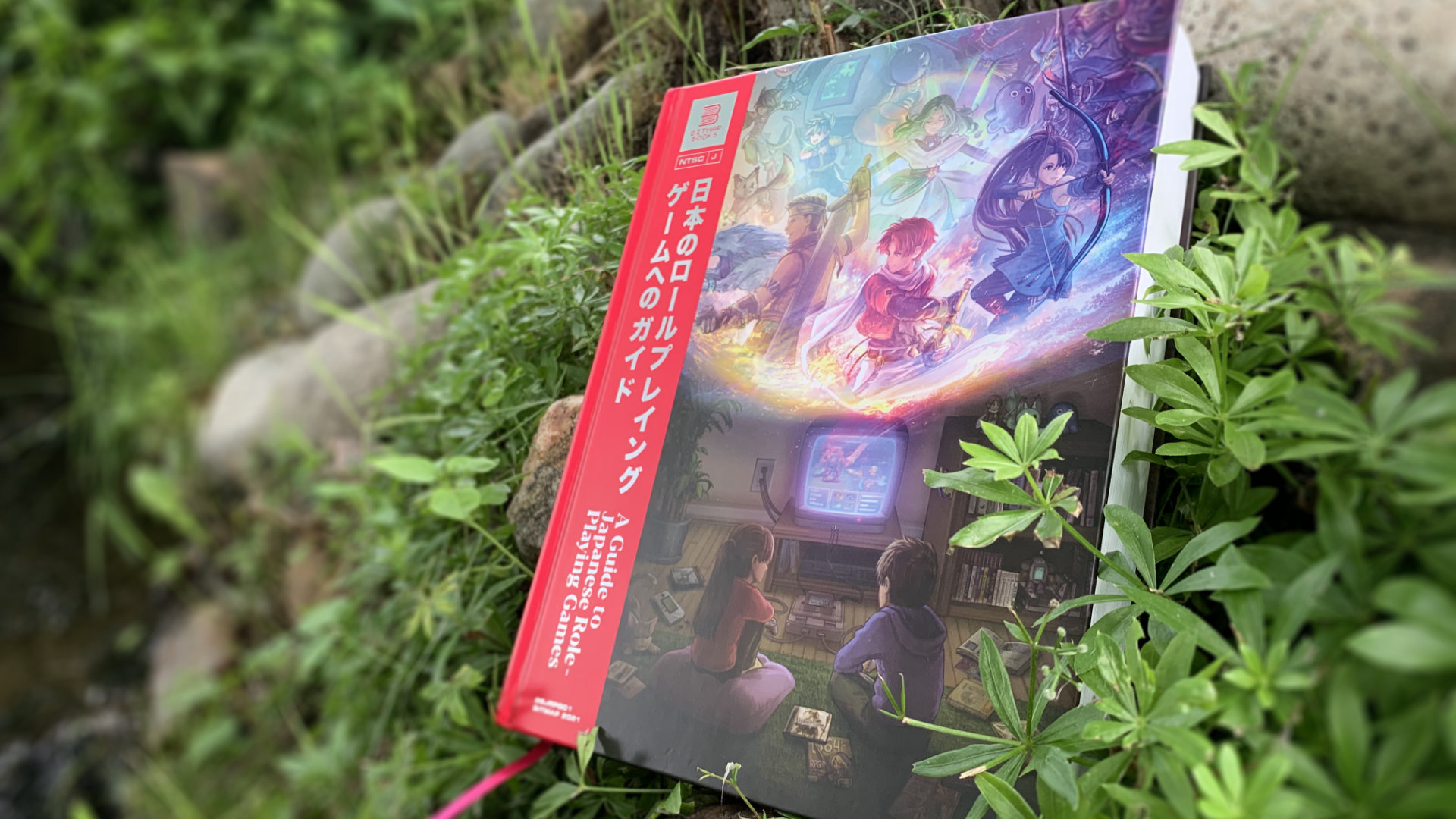 Bitmap Books is an independent British publishing press specializing in retro gaming books. They were founded by a graphic designer and focus on bringing visuals together with (sometimes exclusive!) industry interviews and features to celebrate vintage interactive media. They do a mix of licensed books and compilations; some of their recent titles include The Art of Point-and-Click Adventure Games and visual compendiums for several early consoles. Their offerings are generally quarto-sized because of their focus on visuals, and they are very committed to printing high-quality and comprehensive books — ones you’d leaf through over time or leave on display. This makes them uniquely suited to tackling JRPGs, especially due to the rapid evolution in graphics and technology the industry has seen, so I was thrilled to see them working on A Guide to Japanese Role-Playing Games.

It’s not an exaggeration to say that a subset of us have grown up with RPGs. I mean this in a very literal sense; we as individuals have grown and developed alongside this growing and evolving medium. We’ve gone from “what on earth is that you’re playing?” to Cloud Strife as a cultural figure, not to mention the breathtaking technological advancements taking place during that timeframe. In this sense, A Guide to Japanese Role-Playing Games is an exceptional book. It represents an attempt to capture an adventurous spirit and the player’s relationship with the medium while functioning to catalogue and describe the individual games. In many ways, RPG fans have been lacking resources like this, so with all this history, change, and transformation, it’s past time for this information to be put to paper so we can reflect on the games we love. Does this book accomplish that? And is it worthwhile to have? I would definitely say so, especially if you haven’t been immersed in JRPGs or are at a point where you’re synthesizing the knowledge you have.

The question of what does and does not constitute an RPG (the J part in this instance is self-explanatory) is a dynamic one, and this book addresses it directly and immediately. A Guide to Japanese Role-Playing Games acknowledges that many early games were rooted in tabletop RPGs but designed to be less frustrating, more accessible, and created for a digital system with limited inputs. However, many changes have occurred since that time, so determining what counts as an RPG today relies on inclusion guidelines such as a distinct overworld and dungeons, battle screens, statistics that influence battle or other encounters), and a narrative focus. Overall, these criteria are not far off from our process at RPGFan, with the exception of our graphic novel and narrative adventure coverage, so I was pleased to see it stated so clearly.

We all like exploration and puzzles, so let’s delve into the book in more detail and look at how the 30+ contributors laid out the pieces of this JRPG history for us. On a micro level, you get a sense of the story, gameplay, and even the community’s reception toward the game from each game entry. They are informative but do include some pieces of interpretation and opinion; they’re described in the introduction as “reviews,” and honestly, that is the best term. Given that, it’s extremely impressive how these entries manage to maintain a cohesive and generally even-handed tone. It almost feels as though the entries include commentary on the plot and gameplay as more information: they tell you the way a player is likely to react or opinions you are likely to hear associated with these games. The excerpts from the introductions and game pages that we published recently do illustrate this nicely.

Having each entry include background information and comparisons to other games (or a description of how the game fits into its respective series) helps maintain consistency, but the oversight and direction needed to achieve that with over 600 entries must be recognized. I appreciate that their Kingdom Hearts entry addresses many of the franchise’s facets — gripes like the camera, how the plot exists over a large number of spinoffs, the integration of Square’s dramatic storytelling with Disney whimsy, Lance Bass as Sephiroth — without sounding judgmental about the games themselves. And this is true across so many games and franchises in this book! The only area where I wish there had been a bit more oversight is the nitty-gritty proofreading of written copy. It didn’t detract from the overall experience, though, and I’m more than willing to overlook a few commas and repeated words because of the sheer amount of text presented.

The writing in A Guide to Japanese Role-Playing Games, along with the eye-catching layout and visuals for each game, provide a robust infrastructure, some scaffolding upon which one can build impressions of the trends and RPG history over time. Want to look at the differences in box art between the 16-bit era and now? No problem. Want to compare Falcom games to Square/Square Enix titles over time? Also fairly simple. One of my favorite things about this book is how naturally it allows you to find the areas that interest you and focus on them across games and time, on a macro level.

The content has a generally chronological flow to it, but there are a few chapters near the beginning dedicated to franchises and developers that have made their mark across the lifespan of JRPGs so far, so you get some sense of landmark RPG history that way. Many people have put lots of love into these pages, which visually comes across in the writing and the book’s organization. If I don’t go into great detail about the physical book here, it’s because it is uniformly high-quality and because it’s mentioned in the preview.

Reading A Guide to Japanese Role-Playing Games makes the history of our favorite genre feel like an incredibly wild sidequest. It’s a story that spans continents, a cultural exchange over decades, and a tale of developing technology and the humans that grew alongside it and continue to use it to engage in visually rich, narrative-focused, interactive stories. My guess is that if you’re visiting RPGFan and reading this, that is a story you are familiar with. If you’re looking to find some context and a broad perspective on that story, this book is an excellent start. My only burning question at this point is how Bitmap will address the evolution of JRPGs from now on and the expanding indie market for this genre. Hopefully there are plans for more volumes, more introductory articles, and just more in general!