A Melancholy Tribute to The Legend of Zelda: Ocarina of Time 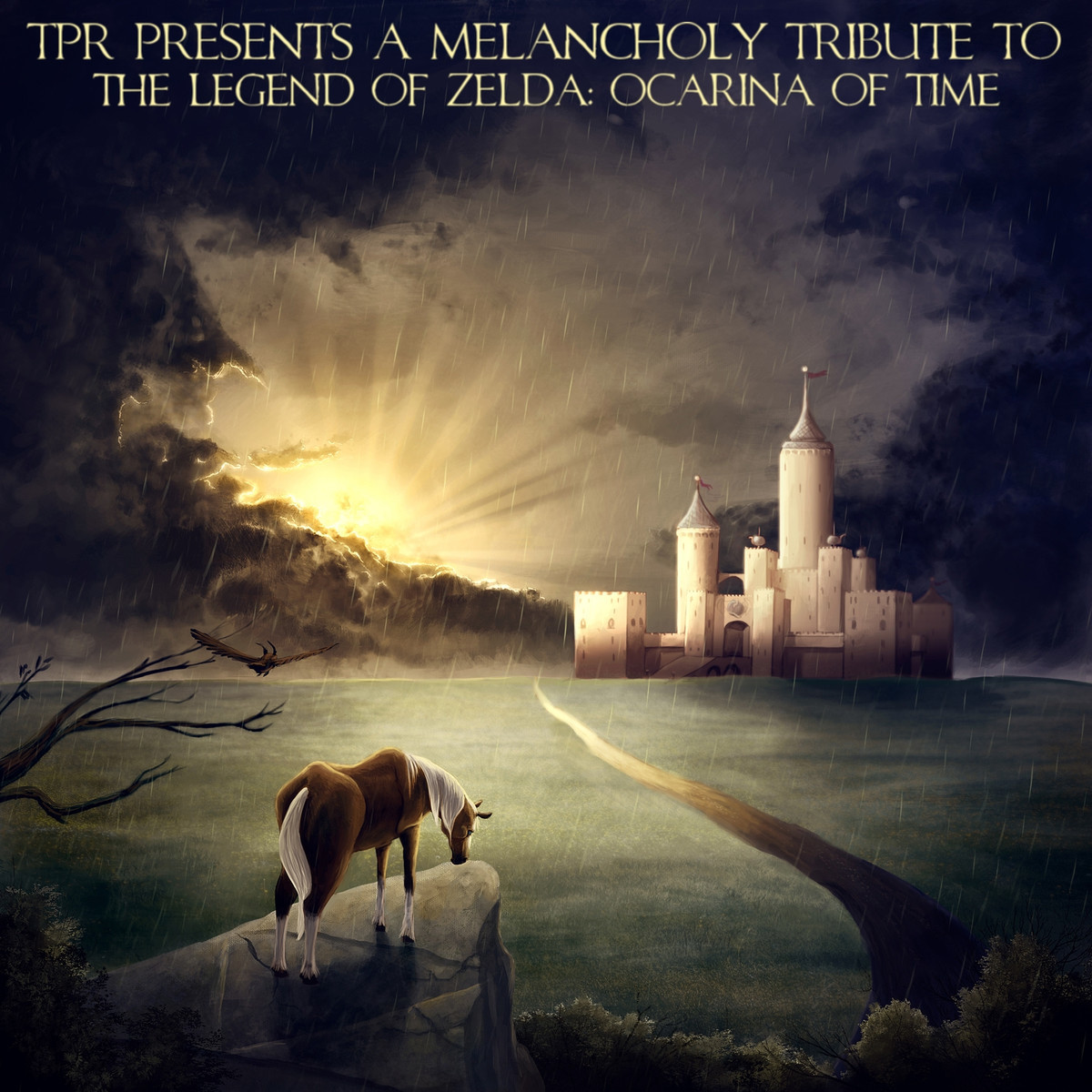 I feel like I’m heading into the lion’s den here. The fan feedback for TPR’s Melancholy Tributes series is, as Steam would say, overwhelmingly positive. RPGFan has covered five of TPR’s melancholy tributes, and all of those reviews have been overwhelmingly positive as well. With all those good vibrations, I’m struggling to express my honest opinions here. No matter what happens in the following paragraphs, please know, my dear reader, that I mean no disrespect to TPR. Supporting and showing appreciation for an artist’s work comes in all shapes and sizes, and a critique may be just as meaningful as an immediate approval of the work.

In order to know where I’m coming from in this review, you have to know a teensy thing about me: I’ve listened to a lot of rearrangements of The Legend of Zelda: Ocarina of Time. The game has been out for sixteen years now, and so many artists have shown their love for Koji Kondo’s amazing soundtrack. I’ve been listening to rearrangements of Ocarina of Time songs since I first played the game, on vgmusic.com, on various official soundtracks through samples on RPGFan, on YouTube, in all of the Super Smash Bros. games, in Video Games Live, etc. So, if you want my attention, you have to do something different from the sixteen years of Ocarina of Time tributes that I’ve listened to.

The biggest problem I had with A Melancholy Tribute to The Legend of Zelda: Ocarina of Time (henceforth Melancholy: Ocarina) is how unoriginal it is. Okay, it’s a cover album; how are you supposed to be original with songs that you didn’t even write? There are plenty of ways to do that. A cover album needs to give someone a reason to listen to it instead of the original album. Otherwise, why would anyone bother with a cover album anyway? I listen to cover albums expecting a wacky syncopation, a different time signature, a new melody, a new harmony, etc. Instead, in Melancholy: Ocarina, I got straightforward piano versions of the original songs. Some people want this; some people are purists, and if you do something too different from the original song, that’s a no-siree. If that’s you, then stop reading right here and buy this album. I want something else, though. Something that brings this hallmark of a video game soundtrack back to life after sixteen years.

Stephen praised the song choice in his review for A Melancholy Tribute to Final Fantasy IX. I wish I could do the same for Melancholy: Ocarina, but I think many of the problems stem from the song choice. Some of the songs that TPR chose to include in this album are short, either in terms of their loop segments or in terms of the overall length of the song, i.e. “Fairy Fountain” and “Serenade of Water.” But TPR either doesn’t try to elongate the short songs or doesn’t add enough new material to make it worth listening to the same looped melody three times. There are so many things an artist can do with a beautiful ocarina song like “Serenade of Water,” but TPR doesn’t add anything beautiful to match it. “Title Theme,” “Fairy Fountain,” and “Temple of Time” are also gorgeous songs that can be even more so with a melancholy piano — but a change in instrumentation alone isn’t enough to make me want to listen to the same melody thrice. Again, these songs have been around for sixteen years. That means I’ve known the original melodies for sixteen years. I want to hear what a video game music cover artist who loves the original game music so much that they willingly spend hours rearranging, practicing, and recording the songs can do with these beloved melodies.

Besides the issues of length and originality, another problem with the song choice is that many of them are notable, loved, and memorable for the aesthetic — with the aesthetic either supporting the melody or being even more important than the melody. I’m talking about the wistful “Title Theme,” the mysterious “Fairy Fountain,” the cool “Zora’s Domain,” the somber “Temple of Time,” the Latin-inspired “Gerudo Valley,” the lively “Lost Woods,” and definitely the honky-tonk “Horse Race.” If you want to cover a song that’s more aesthetic-driven and less melody-driven, you have to do more than just cover the melody. You have to match the aesthetic, or else the very essence of what makes the song notable, loved, and memorable to begin with is lost. “Gerudo Valley” and “Lost Woods” sounds stretched, as if TPR felt obligated to include these popular songs on the album but knew they didn’t belong here, and the incredibly dark “Horse Race” is one of the strangest things I’ve heard. A melancholy theme is great, but you need to know what can work with that theme. Songs that rely so heavily on their liveliness, like “Lost Woods,” “Horse Race,” and “Gerudo Valley” don’t work with the melancholy theme.

Out of the fifteen tracks, five of them stand out to me. “Zora’s Domain” perfectly captures the original aesthetic — the awe, the chill, and the elegance of the crystalline home of the water-dwelling Zora — with its shimmerings, slow crescendos of chords, and plenty of reverb. Mixing something as simple as windy rain in the background of “Song of Storms” adds so much weight and character to the song, even more so than the key change that appears in the last thirty seconds. With the key change also comes a slight inflection of the melody — a note a whole step higher rather than lower — and that one note, that slight change, adds something new, something better. “LonLon Ranch” is a great choice for a melancholy theme; it sounds even more like a lullaby than Zelda’s Lullaby. TPR also does an amazing job with the change to a minor key at the end, creating a new somber melody that reminds me of the loss that may grip Romani Ranch in The Legend of Zelda: Majora’s Mask. TPR also does an outstanding job improving the melodies of “Kokiri Forest” and “Market.” Kokiri Forest, with its sprightly youngsters, and Market, with its hustle-and-bustle activity, have both become towns full of schoolchildren and church bells. It works without interrupting the song.

TPR’s main forte is left hand techniques. In so many of the tracks, TPR freely creates an entirely new left hand sequence. The even arpeggios in “LonLon Ranch” sound like a child learning one of their first piano songs, adding even more to the lullaby feel. The smooth left hand rhythm of “Song of Storms” replaces the harsh accordion to sound more like a rainy day than a klezmer tune. The most impressive left hand technique, though, is sticking the bass part of “Title Theme” into “Lost Woods.” As strange as it is, it’s more exhilarating to hear how well it works. It makes sense that TPR would more easily change the bass of these memorable songs rather than their melodies; the purists won’t get as angry about changing what some call the “background tune.” These changes in bass parts impress me the most in the album, and they’re the reason I’m being so critical of the album and of its artist. I can tell TPR has the skill and the creativity to make Melancholy: Ocarina a spectacular album. I can hear it — and the subtlety that is required in a cover album — in the left hand. I want that strength to spread from the left hand to the right hand, to the effects board, to the mixer, and ultimately to the listener’s ears. I want to hear that creativity and that passion in the whole song and in the whole album.

I hope that, after reading this review, my dear reader can understand that I’m not trying to rag on TPR. I know that TPR is talented and passionate in what he does, and I’ve heard it in some of his other Melancholy tributes. I didn’t feel it in Melancholy: Ocarina, and I’m disappointed, because I know TPR can do better — especially with one of the video game community’s favorite games and soundtracks. Hopefully, since TPR has covered multiple games in a series (i.e. Final Fantasy), we can hear another melancholy tribute to a Zelda game. When that comes out, I’ll be waiting in earnest and excitement.