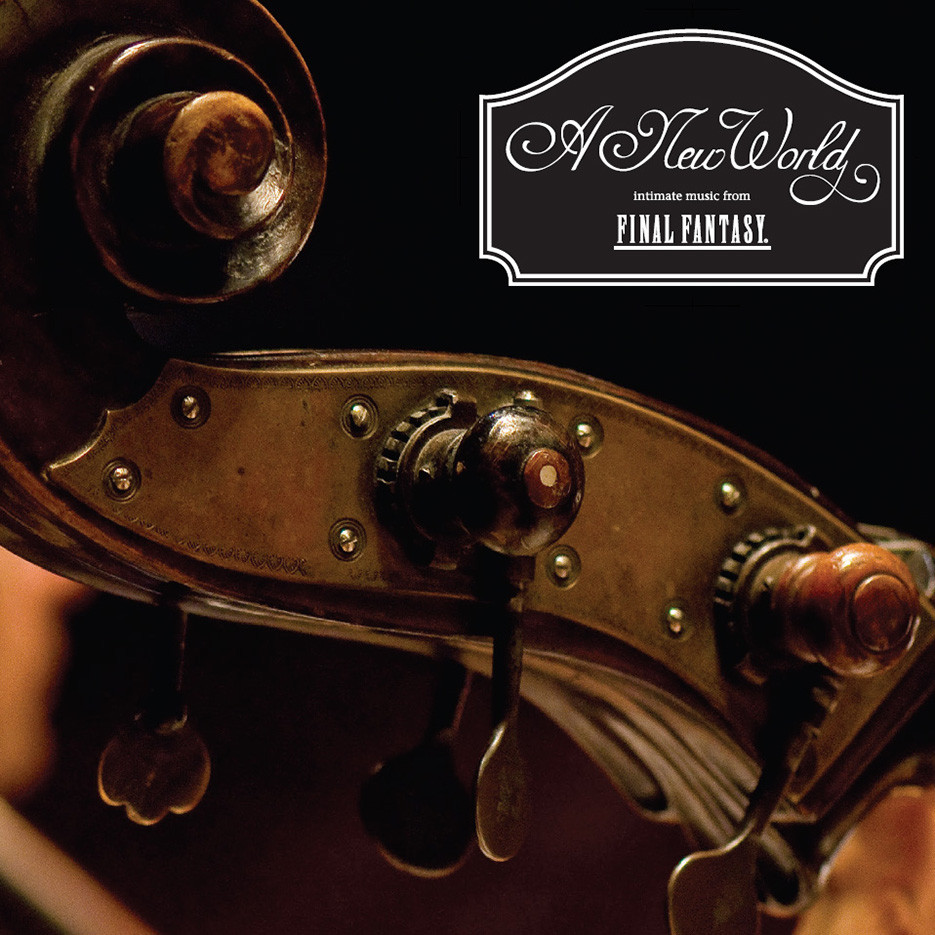 So many things about A New World: intimate music from Final Fantasy confuse me. The execution and direction of the project mission confuse me. The performance and the production confuse me. There are so many question marks here that I don’t feel right reviewing it like it’s the final project. I just want to return the CD to Distant Worlds and say, “Sorry, try again.”

Unfortunately, this is not the case for some of the other pieces. For songs with many instruments and a big sound, like “One Winged Angel” and “Force Your Way,” the arrangers don’t change enough of the score to fit the smaller sound of a chamber orchestra. The results are overtly loud, rhythmic string sequences and awkwardly lonely brass and percussion. Instead of a complete picture, we have broken puzzle pieces that don’t know how to cooperate. The harmony of the orchestra is disrupted in the biggest, most exciting songs.

The Roths want an “intimate” experience with Final Fantasy music. They want to bring the Distant Worlds audience close to a handful of musicians instead of pushing it to the back of a concert hall. That is what “intimate” means in this project. “Intimate” does not mean that only romantic or sexy songs have been chosen from the vast Final Fantasy discography. “Intimate” does not mean a slow moment where two people gaze into each other’s eyes. Then why does conductor Arnie Roth insist on playing everything so slowly? “Dark World” and “Force Your Way” slow down even more partway through. While many melancholy ballads do have a slower tempo, slowing down a fast song will not automatically create a feeling of intimacy. The direction is faulty and ultimately creates the urge to skip a track out of boredom.
The recording is of the London premiere of the A New World tour. Why Distant Worlds would choose to document the first performance, when everything is new and no one is comfortable, to represent the tour is just another questionable decision of the project. Sure enough, some people start getting stage fright. The first violin shakes in the duet “The Promise – Blinded by Light,” the organ stumbles in “Dark World,” the trumpet skips beats in “A New World,” and so on. Is there another reason besides pre-show jitters that caused all of these mistakes? Was the London premiere just one of those bad shows within a concert tour? Did the musicians not have enough time to practice before going on tour? If it’s any of the above, the show should be polished after a few more concerts. That’s when it should have been recorded.

But the London premiere was chosen to be recorded, and sadly its technical issues are now preserved. That would be fine if the production worked its magic to salvage the concert, but it doesn’t even try to work around the blunders most of the time. Instead of hiding that shaky violin amidst the strings, it’s front and center, clearly squeaking and missing notes. I guess “intimate” could mean putting a face behind an instrument, and the mistakes do remind listeners that real, imperfect people are playing the music; but I’m not confident that this is what the Roths were going for when they designed this project.

With all that being said, some tracks do succeed swimmingly in rearranging Final Fantasy songs for chamber orchestra. Everything complements each other in “Zanarkand:” the instruments, the orchestration, and the writing. “Fragments of Memories” is a simple string quartet that flows together with grace. The cello duet “Troia” is sweet; and the solo piano performances, “Those Who Fight,” “Gustaberg,” and “Eruyt Village” are vivacious. “Fight with Seymour” is also a welcome surprise, managing to make some sense out of the original chaotic mess of a song. All of these tracks consist of smaller groups within the chamber orchestra: solo pieces, duets, string quartets, etc. Things only get messy once more instruments are involved. This just means the Roths need to practice slowly adding more instruments to the stew before serving us the meal.

A New World: intimate music from Final Fantasy needs to reevaluate its mission and the plan to execute that mission. With a little more work and a little more direction, it could be a worthy performance to listen to and to attend. Right now, though, it needs some time.