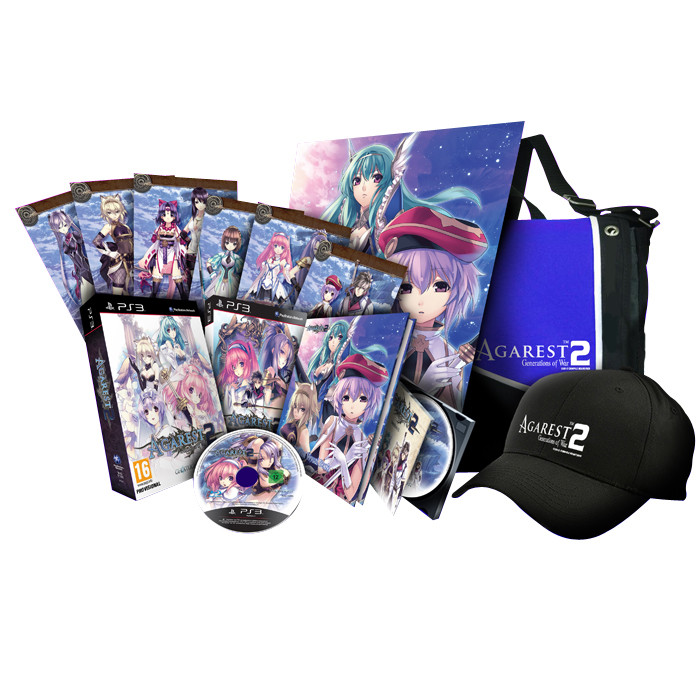 Record of Agarest War 2 was a big surprise for me. Instead of being a proverbial Idea Factory mess, it was a surprisingly good JRPG. Sure, it could have been refined further, but it was a step in the right direction, and the most impressive aspect was undoubtedly the music. I absolutely adored every note I heard in the game, from the sweeping classical style themes to the guitar driven battle themes to the more modern sounding themes. Composer Kenji Kaneko truly outdid himself here.

Because I loved the music in the game so much, I was disappointed that the only available soundtrack release was this 23-track pack-in CD that came with the European deluxe version of the game. A partial soundtrack is preferable to no soundtrack at all, but some of my favorite tunes (like the Gai Desert battle theme) are not present. There are also multiple vocal themes peppered throughout the game, such as the title theme, an intro theme, and a few “Easter Egg” vocal themes. I enjoyed all of these songs, but not a single one is represented on this soundtrack. At least one vocal theme should have been represented on this partial soundtrack. Also disappointing is that I would have rather seen a soundtrack CD packed in with the deluxe US version of the game rather than the baubles we got, like the inflatable doll.

Okay, so some of what I wanted to hear on this soundtrack isn’t there, but what is there is fantastic. Each and every track is a joy to listen to, with no sour notes in the bunch. The bold strings, winds, brass, and other such classical instrumentation bolster songs like “Breath of Mountain,” “Those Who Love Nature,” “Beyond the World,” and “Hold a Celebration.” These are the kind of majestic, sweeping pieces that befit a JRPG of epic scope. Three of them are location themes, but “Hold a Celebration” is actually the victory theme following a battle. Most people will never hear that song in its entirety, as they’re busy pressing a button to shoot through the menus and get back to the game, so hearing that the whole tune gave me a new-found appreciation for it.

Modern touches also abound in this soundtrack in pieces like “The Blacksmith” and “The Bulldog.” These primarily synth-driven pieces would not be out of place in an old-school Megami Tensei game such as the first Persona. Tracks such as “Rise A Knight” and “Fire In The Lava” feature delightfully crunchy, distorted guitars. “Rise A Knight” is a wonderfully punchy battle theme and “Fire In The Lava” reflects the foreboding harshness of its location. “Fire In The Lava” is my favorite piece of music in this soundtrack because it sonically represents my feelings about the game as a whole. The song starts out simply enough, but becomes more layered and more complex throughout its duration. Echoing my overall sentiment of the game, this piece has a few brief instances with some extraneous notes and instrumentation that touch upon cheesiness, but they’re easy to overlook.

Not every piece of music is big and bold. Some of the minor location themes like “Frozen Olive” and “A Forest Bath” are nicely atmospheric with arrangements that allow the instruments to breathe. Even pieces with fewer instruments and sparser arrangements like “Morning Sun,” “Deep Suspicion,” and “Indulge in Reminiscences” have carefully selected notes, rhythms, and phrasing that work exceedingly well. Just listening to “Deep Suspicion” can put anyone on the defensive, even if they’re sitting alone and nobody has accused them of anything.

Record of Agarest War 2 has some of the best music I’ve heard in a video game this year. The quality of the compositions is readily apparent in this soundtrack and is undoubtedly some of Kenji Kaneko’s best work. But because I enjoyed the music so much, I was left disappointed that there isn’t a full OST with all the vocal themes and the various other piece of music I liked. What is here, though, is very good, and I encourage everyone, especially non-Idea Factory fans, to listen to the music. It’s good enough to shatter preconceived notions. Now, if only Idea Factory would include worthwhile extras like soundtracks instead of goofy little trinkets in future US deluxe editions of games…