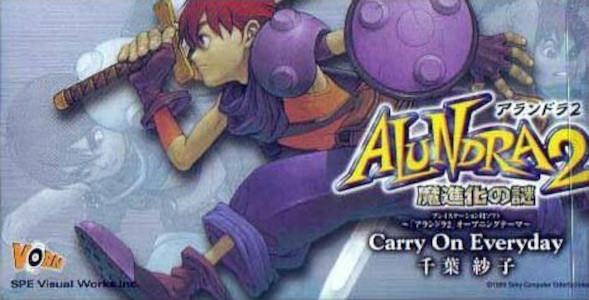 This single is the opening/ending theme song single for Alundra 2.

If you own the Alundra 2 Original Soundtrack, there isn’t much benefit in owning this single. The Full Size Version of “Carry on Everyday” is about twice as long as the in-game version (on the OST). I’m Home (“Tadaima”) is the same version as on the OST. So, again, if you own the OST, it wouldn’t be worth your time to find this single.

If you don’t ever plan or hope to own the OST, however, I would suggest you hunt down this single. I am rarely impressed by J-Pop vocal singles; they don’t “do it for me.” Saeko Chiba, however, has a voice that is worth remembering, at least for these two songs.

The opening theme, “Carry on Everyday,” isn’t the best song in the world. It’s peppy, upbeat, and uses some dated instrumental styles for a certain “retro” feel. The back-up vocals make it a more enjoyable, somewhat silly experience. This song is jazzy and fun; not the best thing in the world, but better than many Anime vocal opening themes. Not to be overlooked.

Whatever merits the opening theme might have, they pale in comparison to the ending theme. “Tadaima,” or in English, “I’m Home,” is one of the best ending vocals I’ve ever heard for an RPG: period. The looped sample in the background of this piece contains the sounds of a picture snapping and water softly splashing: these sounds are beautiful. The melody is very enjoyable, even if the chordal structure is simple pop fare. Again, the looped sample really makes this piece: the chorus is also beautiful, and the song rises and falls nicely. I haven’t enjoyed a Japanese pop vocal this much in years.

If you can, and if you like Alundra 2 or Saeko Chiba enough, you really should consider purchasing this single… somewhere, in some obscure Japanese CD store. This is all my opinion, of course; you may have found many better Japanese vocal pieces out there. As for me, I’m sticking to my guns: this is some really good stuff for a game-based vocal opening and ending single.