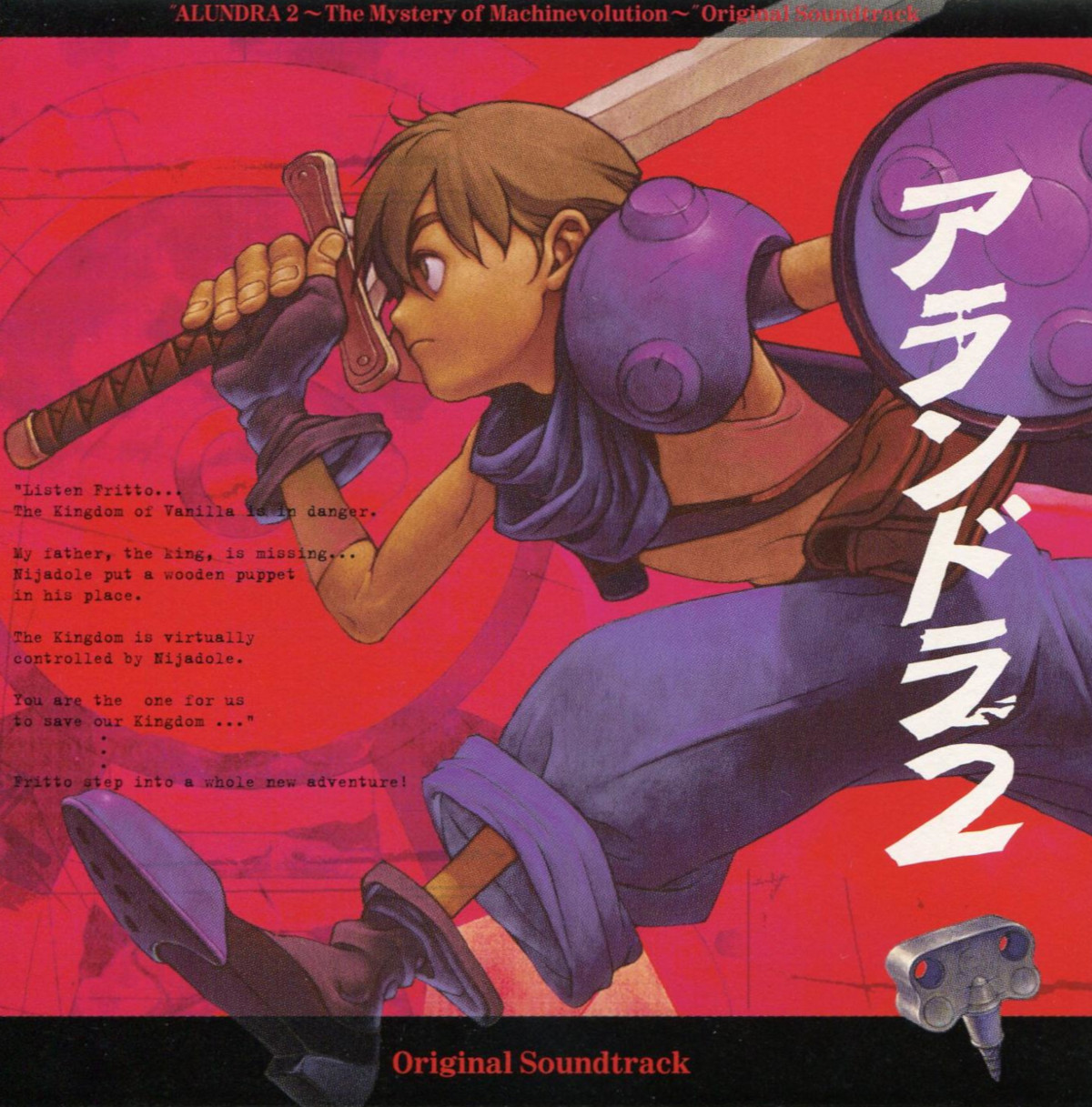 Alundra 2: one of the most unrelated sequels to an original game in the history of RPGs. While Alundra was actually about a character named “Alundra,” Alundra 2 is about a kid named Fritz… and the game feels much more silly and less serious than the original. Everything about the sequel changes from the original.

Well, except for the game’s composer. Kouhei Tanaka, who is most often recognized for composing the music for the Sakura Wars series. Tanaka’s compositions are always solid, but some suffer from lackluster more than others. This is one of those soundtracks.

Though it may not be fair to do so, one cannot help but compare Alundra 2‘s OST to the original. The Alundra Original Game Soundtrack was out-and-out one of the best soundtracks for an obscure RPG in a decade of soundtracks. When Alundra 2 was first announced, many people looked forward to a sequel that would out-do its predecessor in every way, including music. What they got, in comparison to what they wanted, was a complete failure.

However, if the game, and specifically the game’s music, is left to stand on its own, it stands tall, and one must recognize and respect Tanaka’s ability to compose in these pieces as well.

Throughout this soundtrack, Tanaka makes great use of piano, strings, and sustained synthesizers in ways that many composers before him failed to do in the PSX era. The pieces that I find least enjoyable are those that attempt to be something they cannot be: epic. There are a few pieces that try to invoke a powerful, all-important musical statement; but this cannot be acceptable for a game like Alundra 2, and somehow these compositions become the worst, and the ones that are most often skipped when in the CD player.

There are three vocal pieces for this OST: the opening (which is pretty good), the ending (which is wonderfully serene), and a short song in the middle of the OST entitled “Who Changed Me Into a Jellyfish Like This?” (just the title of this piece makes me laugh). Not only is this song well-composed, but is also in a sort of dark, ethereal style with all of the proper instrumentation to back up the mysterious Japanese female vocalist. The Japanese-ignorant listener can only wonder at what silly lyrics are being sung in this fun little tune.

The beauty, the artistic flair, the depth and wonder that one could find in Alundra seems to be missing in the Alundra 2 Original Soundtrack. What’s left is something fun and light, with a few notable pieces here and there. Overall, a solid OST, but certainly not a must-have.