EPOCH: A Tribute to Chrono Trigger 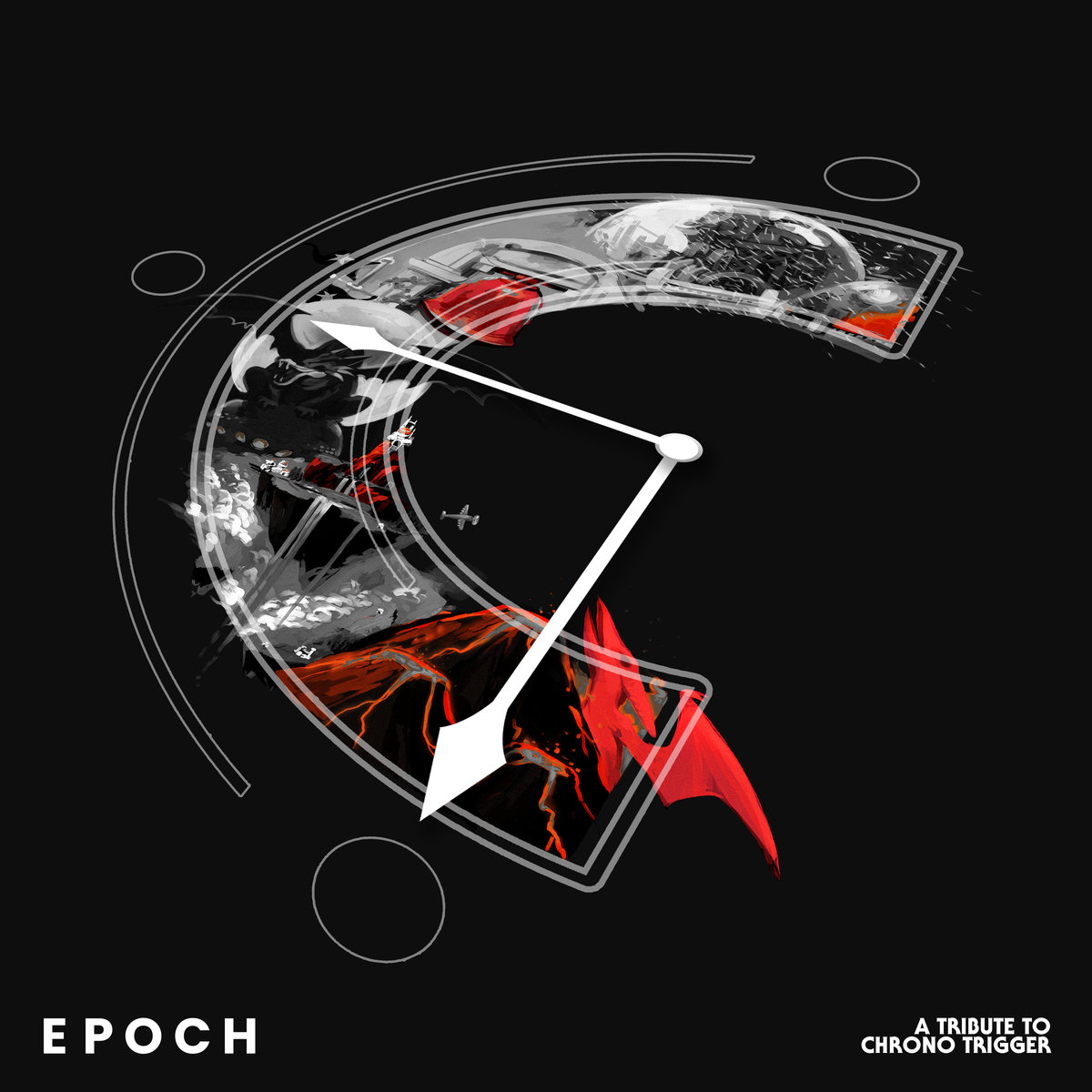 One may think that after the release of 2016’s Chronicles of Time — a massive 81-track, 6-hour musical collaboration — there was no more room for a giant Chrono Trigger tribute album, because what more could we need?

One would, of course, be wrong.

Enter EPOCH: A Tribute to Chrono Trigger. Featuring 60 tracks, clocking in at over 3.5 hours, and featuring the work of an obscene number of talented people, it’s easy to see EPOCH as Materia Collective’s unofficial companion to Chronicles of Time.

EPOCH begins in an interesting place for a Chrono Trigger album, with an uplifting arrangement of the game’s ending theme, “To Far Away Times.” Leading with this song is almost as surprising as the choice of wind instruments and the sprinkling of boisterous vocal accents that make up the arrangement, but it sets the tone for the album as a whole by defying expectations up front.

Before we get into particular tracks, a common question people have with large-scale compilations like this is one of consistency: Do these songs all mesh together in any kind of coherent fashion? Not really. Each artist approached their contribution in their own style, from HatVGM’s jazz stylings on “Swinging in the Sewers” to Matías Lati Quezada’s gorgeous and thankfully-not-another-guitar-led “Frog’s Theme and Variation,” to Videri String Quartet’s… well, you can guess what instruments they play.

Personally, I’m just fine with the instrumental choices not being consistent across an album, and I like that every musician on these projects gets to bring their own flavor to the compositions. That said, it’s vital to note that just about everyone’s unique approaches to the music of Chrono Trigger is very much in the spirit of the game itself and how the original songs were used. Early on we have Michael Schiciano with “Morning Glow,” bringing a majorly laid-back vibe thanks to the use of a French Horn. It slows down the original song and changes the feel, but it fits perfectly with our protagonist’s lazy start to the morning at the game’s outset. It’s a cohesion of a different kind — and one that the artists on Chronicles of Time nailed as well — and I am here for it.

There are an ample number of songs on EPOCH that will play along with your musical expectations. The various battle themes are energetic, with wonderful choices of instrumentation that are still immediately recognizable. They’re such faithful takes on the original music that I would love to play Chrono Trigger with some of these tracks swapped in. Of particular note in battle music, HatVGM brings his brass game to “Black Tyranno” with epic results, while Daniel Cortes’ viola adds an exotic flair to “Magus the Mystic” that sends chills down my spine.

Speaking of Zeal inhabitants, Lauren the Flute — a personal favorite — delivers a mystically haunting performance of “Sealed Door.” These titular doors are vitally important in Chrono Trigger, and the constant mystery of what they house makes wind instruments an ideal choice for enhancing this feeling through music. Related to the doors is everyone’s favorite big sister in Chrono Trigger, presented here by Michael Hoffman. Look, I’ll admit I was swept up in the mystique of Schala in the 90s too: Oh, I had fan fiction, I drew my own comics… but that is, uh, off topic. Point being, I have listened to many, many takes on “Schala’s Theme,” and while I’m not ready to say this is my #1 favorite (that honor still goes to “Temporal Eternity” from Chronicles of Time, which makes my heart sing), it’s damn high on the list thanks to some expert cello work from Andrew Dunn.

Alright, now that we’ve talked about some songs that deliver the quality music expected of Chrono Trigger, let’s talk about the unexpected, because we are in for a ride, my friend.

“The Trial” is based on the music itself, but also dialogue from Chrono’s trial after returning to 1000 A.D. It is, essentially, a stage production of this iconic scene, composed and performed with love. Chrono himself has some lines (!), as do the judge, chancellor, and even the witnesses (the not-that-old old man and the girl who lost her kitty). The music rises as the tale unfolds, the actors are spot-on with expressive deliveries, and it’s just an immensely fun time. Easily one of the highlights of the album.

Moving ahead about 1300 years, it’s somewhat well-known that Robo’s incredibly catchy theme bears some striking similarities to a wildly popular 1980s pop song. XenoKeyz leans into that connection on EPOCH, with a boppin’ electronica-tinged take on everyone’s favorite literally-named robotic character that feels like the natural progression of the Robo-Astley connection. It’s infused with personality, and just the idea of Robo serenading Lucca and company as thanks for restoring him to life fills me with glee.

Chrono Trigger‘s various Dark Ages and Zeal tracks are big fan favorites, and have seen many arrangements over the years. Sitting in the middle of EPOCH (with some more later on), these songs are every bit the treat that I always hope for, with Orchestral Fantasy’s jazzy “Augurio Oscuro (Black Omen)” being one of the most welcome surprises. A delightful — dare I say — ditty with a fun percussion accompanying a flute, guitar, and more. It’s not what you’d expect for a final dungeon arrangement, and that’s just one reason I dig it. “Corridors of the Mind” is notable as well, and not just because it was performed by a duo named “Lazerwolph” and “Voidsloth” (though seriously, great personas), but because of the smooth guitar that gives this track a really great flow that you can lose yourself in.

Some of Chrono Trigger‘s prehistoric music may not be everyone’s bowl of poi, but “Ayla Fight!” puts a fun spin on Ayla’s theme music that grew on me fast. Bonnie Bogovich, my kindest words to you and the 10-person choir that somehow make “caveman rock ballad” a thing I can actually say I’ve both heard and enjoyed. The Lavos came to kill the whole world, but Ayla fight for her tribe. Yes. Yes she did. The fact that Ayla is a permanent member of my CT endgame party means I may be even more likely to root for the lady.

One of the biggest standouts in the vocal department, though? Elizabeth Zharoff’s “You Are Not Alone.” A slow, dramatic, a cappella take on the Chrono Trigger main theme, this track is built with the layered vocals of 24 people whose moving performances give this song a new life; For a song that I’ve been familiar with for 25 years, that’s saying something. It’s beautiful, and an absolute highlight on EPOCH… but I have saved the best for last.

My highest praise for this album goes to our favorite silver point machine, the other fantastic robot in Chrono Trigger‘s several eras: The robot literally named Cat (well, in Spanish). String Player Gamer and Xander Cruise have created a masterfully delightful take on “Gato’s Theme,” and “Gato’s Symphony” brings a smile to my face every time I listen. It’s boisterous, features instruments I haven’t even heard of (What even is a laud? Apparently a “plectrum-plucked chordophone”), a guest appearance by the amazing Psamathes, and… look, any song that can pull off the lyrics “got a boxing glove comin’ out of my navel” and “call me Gato, or Gonzales if you’re nasty / try and harass me and I’ll kick you to the trash heap” is S-class work in my book. Also, that the lyrics are beyond random fun and actually use Gato’s English and Japanese names is too deep a cut not to respect.

On the other side of this is… the Bwak Choir’s take on “Determination,” fittingly titled “Determined to Bwak.” It’s… well, it’s what they set out to do, I suppose. If there was a song version of an internet troll on EPOCH, this would be it. I actually enjoy these sometimes — the ones on Materia Collective’s FFVII and FFVIII albums are personal favorites — but I feel this one set out less to be offbeat and funny and more “let’s see how annoying this becomes for 39 seconds straight,” and then continued for another two minutes after that.

But you know what? That’s okay. I can say I greatly enjoyed 59/60 of these songs, and that is not a record that applies to most, well, records. Plus, the final ten or so tracks do an excellent job at wrapping up this loving tribute to my all-time favorite RPG. Following a series of upbeat and high energy tracks based on the endgame dungeon and battles, EPOCH comes to a gradual close with the gentle, I-could-fall-asleep-and-get-some-good-rest “To You My Dearest Friends,” which sounds vaguely holiday choir-y, but it puts me in such a relaxed headspace, I can’t complain.

And with that, we are — perhaps ironically — out of time. If it wasn’t clear by now, I have been entranced by EPOCH since it released last fall, and I can’t tell you how many times I’ve listened to the whole album. Along with To Far Away Times and Chronicles of Time, EPOCH is one of the best Chrono Trigger arrangement compilations I’ve ever heard, and is absolutely (unironically) worth your time.