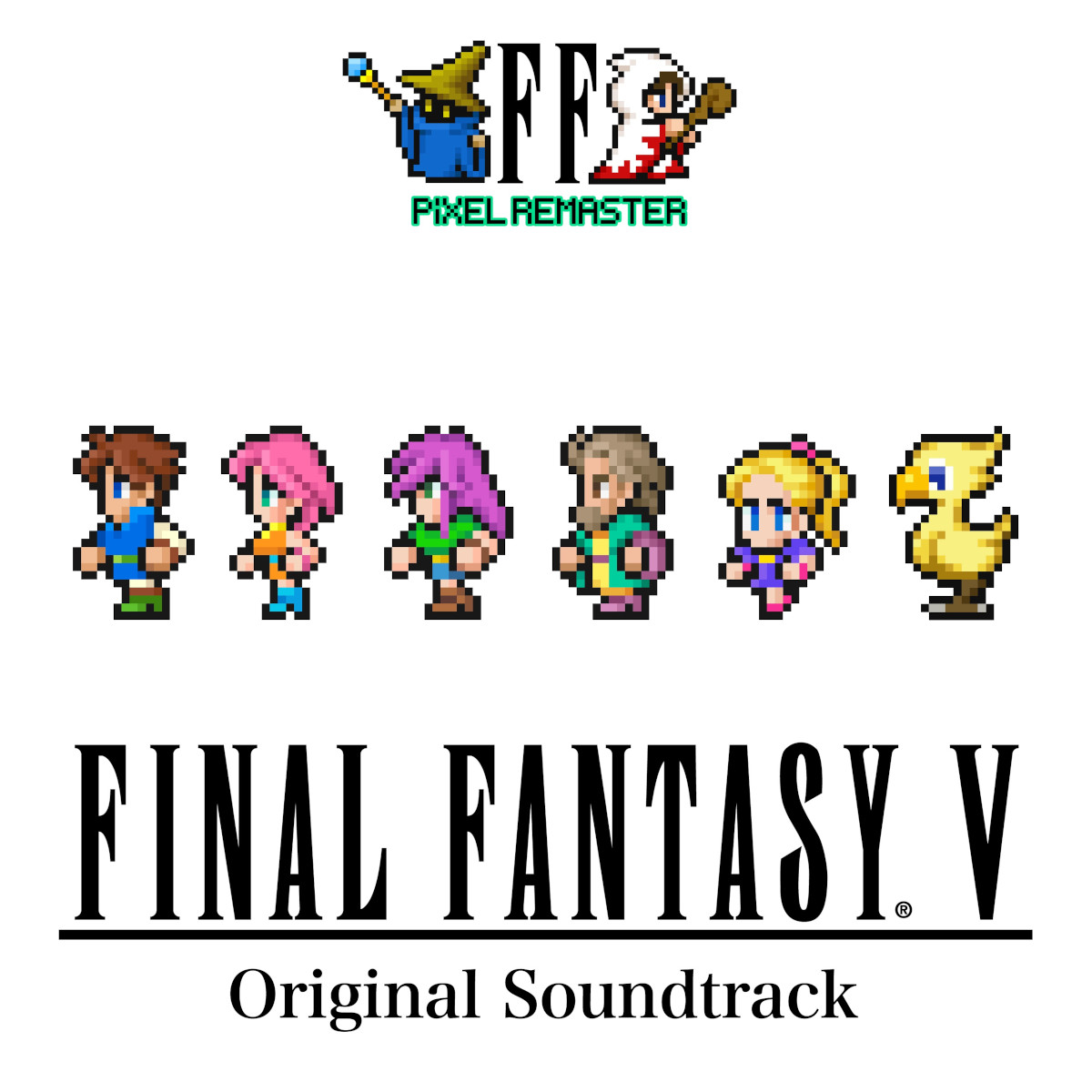 Final Fantasy V exists in an almost mystical place in my mind. It was noticeably absent between IV and VI in the West, and it, along with III, felt like whispers in the wind. However, Final Fantasy V would leave its mark on the series in many meaningful ways, not the least of which was its soundtrack.

As with the rest of the Pixel Remaster series, Final Fantasy V Pixel Remaster received not only gameplay updates, but a whole new soundtrack arrangement. These new arrangements all have a similar signature across every Pixel Remaster: Strong instrumentation and a powerful sense of emotion, especially when it’s necessary for emotional scenes, along with at least some battle themes containing brass and some guitar for good measure.

Putting it simply, if you’ve heard any of the other Pixel Remaster soundtracks, you know exactly what you’re getting into with this one. Despite that, the similarity in style doesn’t detract in the least. It still feels like a powerful tribute to the series’ roots and gives the old cutscenes and battles a familiar yet new feeling in many ways. It’s as though the Pixel Remaster version took my imagined interpretation of what this soundtrack would be without the console sound limitations and used it to fill in the blanks.

This isn’t to say that this outdoes the original, but rather complements it exceptionally well. The Pixel Remaster soundtracks are treated with the utmost amount of care for the source material, and it’s very clear in the Final Fantasy V soundtrack that it got the same attention as the others. Perhaps this is a bit too negative on my part, but I feel as though Square did not have to put as much effort into the music for these games as they did, and yet in so doing, they created the soundscape you remember rather than the one that existed, and that helps to make the Pixel Remaster version of Final Fantasy V one of the best and easiest to recommend.

Starting off the soundtrack with “Main Theme of Final Fantasy V” sets the mood immediately for the entire soundtrack. The expected brass comes in very quickly and powerfully, with a nice bass in the background, followed by very quaint strings and violins. It is a fantastic microcosm of the soundtrack, as the rest follows in a similar suit, sans the more rock-themed music (like the battle themes).

“Reina’s Theme” once again proves that the arrangement has a lot of emotional power. Similar to “Theme of Love” from Final Fantasy IV Pixel Remaster, the instrumentation and performance impact the overall emotion of the song, making it a heartfelt melody and a fantastic representation of the character, something Uematsu has always excelled at with character themes.

Town themes range from the quiet and melancholy with the aptly titled “Town Theme” to more folk sounds with “Harvest.” “Town Theme” in particular brings to mind exactly what it should: a quiet little town where nothing really happens but there’s a sense of peace about. You can feel the light wind brush against your face and perhaps take a nap in the grass while you’re out. A very welcome respite from the monster-filled world outside the town walls, to be sure. “Harvest,” on the other hand, is highly upbeat with the inclusion of various flutes, percussion, and clapping, giving it the kind of sound you’d expect to find in a more bustling city or a festival.

The battle themes are also just as spectacular as you’d expect. In a similar vein as previous Pixel Remasters, they have fast-moving strings, powerful brass, and a rocking guitar as you fight your way to victory. The mix of classical melodies and instruments with guitar works very well to create a unique sound and, perhaps most importantly, makes repetition in combat much more tolerable because the music has that depth; you almost want to get into fights to hear it again, or perhaps encounter a boss not just for the challenge but because the boss theme is really that good.

While “Battle 1” is a bit more standard in its Pixel Remaster sound, which is by no means a bad thing, “Battle 2” adds in a keyboard and has more of an emphasis on the strings and percussion. It still has that same rock feel as the other battle themes, but I felt it stood out enough on its own that it deserved a special mention.

Of course, the most well-known track from this game is “Battle on the Big Bridge,” which has had many renditions produced over the years. The good news is that this rendition of the song is absolutely no slouch. It stays in tune with the rest of the overall tone of the soundtrack’s battle themes, and, to make another musical pun, hits all the right notes in all the right places.

“The Decisive Battle” is more in your face than “The Final Battle” and includes some synth part of the way through. “The Final Battle” is very much an Uematsu finale where the music is just a little bit unsettling despite the epic tone, and reminiscent of the final boss music from Final Fantasy IX in a way.

Reviewing this soundtrack is tough because the music is all very faithfully Uematsu, and Final Fantasy V‘s soundtrack is just as legendary as it has always been. The Pixel Remaster version stands consistent with the other Pixel Remasters, a fitting tribute to a fantastic soundtrack and composer while becoming something on its own: a stellar representation of well-loved source material. Frankly, I would enjoy talking more about other songs such as “Dear Friends” or “Ending Theme” to bring special attention to them, but the soundtrack, like the game, is huge. Every song is fully realized and crafted with love and passion for its source. You could pick almost any song from this soundtrack and find something of exceptionally high quality. I think that speaks volumes about how amazing these Pixel Remaster arrangements truly are.