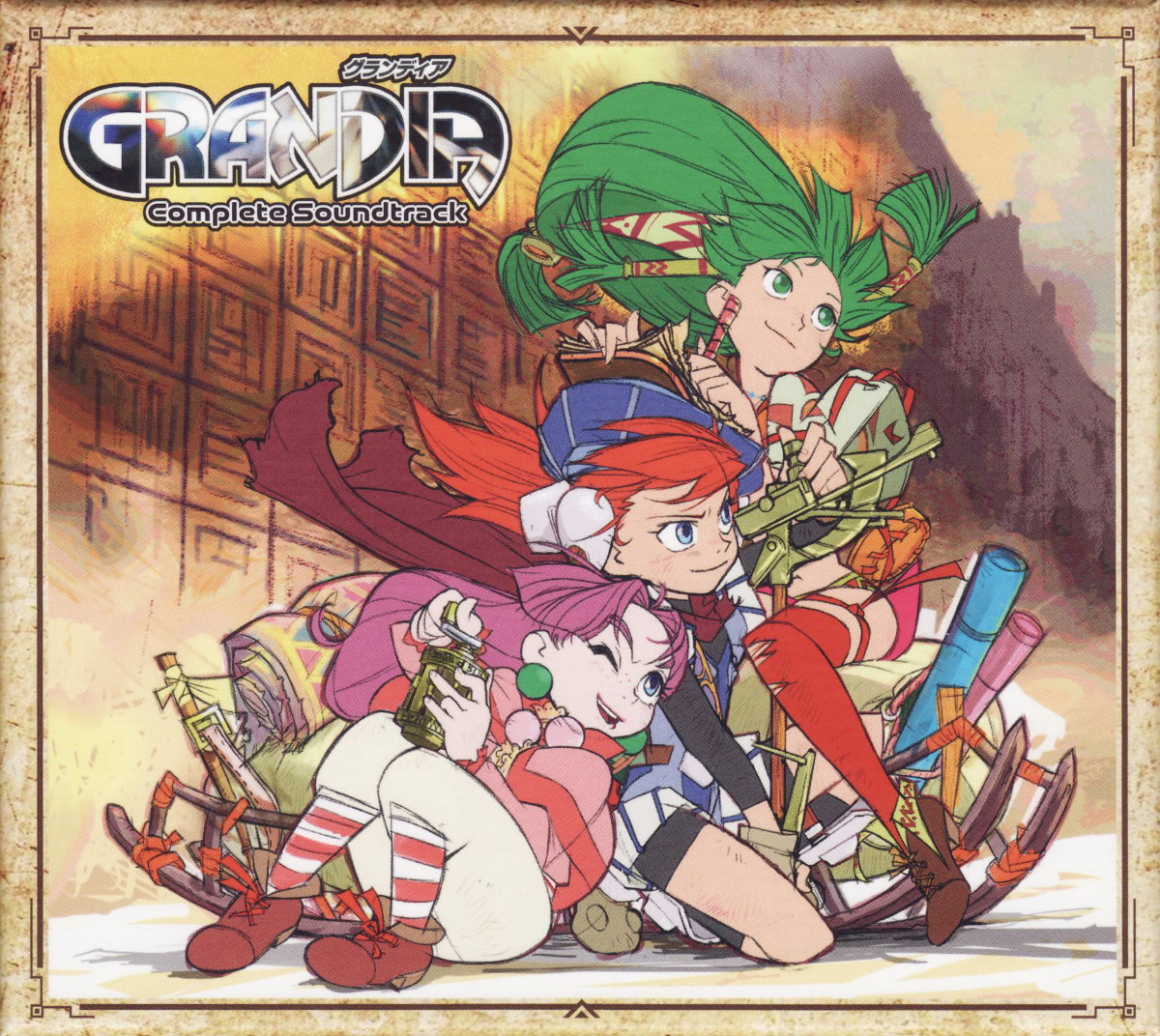 A large portion of the plot in Grandia revolves around the lost Angelou civilization. The militaristic Garlyle Forces want to utilize its long-lost technology and find the Spirit Stone for their own gain. Young adventurer Justin is all about the journey and seeks these same ruins to discover the secret of an artifact his father left him. No matter who you are in this game, you can’t escape the weight of the past, and you probably spend significant time at archeological sites as Grandia’s plot unfolds. Musically mirroring this, Wayô Records has tasked itself with compiling a comprehensive soundtrack release for this soaring adventure past the End of the World, so you might as well call them the Musical Angelou Restoration Experts. They pieced together music from both Grandia Original Soundtrack albums, The Best of Grandia (from 1999 when the PlayStation version released), and the since-out-of-print arrange album Vent. This review is based on the CD release, though Wayô Records also produced a vinyl version with a shorter tracklist.

It’s not enough to place the pieces together, though, as Wayô doesn’t stop there. They undertook this task with collaboration from Game Arts and composer Noriyuki Iwadare himself. New illustrations from the original artist, Toshiaki Hontani, grace the cover of the sturdy and well-designed box, and detailed liner notes capture key team members’ feelings about the game then and now, with a large section dedicated to the sound design, music production, and of course, Iwadare’s own musings. Curiously, this content is paired with all the character descriptions from the game itself and, at the very beginning, fragments of creation stories from Grandia’s world. It lends a mythic quality to the whole collection, and I’ll admit that I got swept up and felt for a moment like I, too, was unearthing something significant. But maybe that’s from all the squinting I did because the text in the CD liner notes is so incredibly small. Read them in a well-lit place.

My favorite tidbit I unearthed in the liner notes was how Iwadare won his place on the project, because that story is the stuff of legend and folktales. When Grandia was in progress, Iwadare had recently completed work on Lunar and earned some acclaim. The executive director—and yes, character illustrator—Toshiaki Hontani, wanted a grand and mysterious direction for this new game with driving beats that “advance the player to the new world,” and consequently thought it fitting to find a new musical direction through a blind audition. The music producer was given an image of the characters standing at the edge of the world, and whosoever could compose music befitting that image would earn the right to compose for Grandia.

The producer wanted his own team represented, of course, but there was a small number of people, with Iwadare himself among them. Nevertheless, Iwadare crafted his submission for this blind audition, which the executive director quickly selected as capturing the spirit of adventure he wanted. Smiling knowingly, the music producer informed the director who the demo belonged to, and that same demo became the “Theme of Grandia.” Listening to that track now, in both its standard and orchestral variations, it’s easy to imagine its captivating melody convincing Hontani of Iwadare’s versatility and cementing the game’s musical destiny. It has a very motivating effect even if you don’t have the adventurous context of the game!

But how did the overall soundtrack take shape under Iwadare’s direction, and how does this version fare presenting the material? First off, having a complete music collection with this level of care and attention to mastering has only improved my opinion of the soundtrack. I played through Grandia relatively recently for Retro Encounter, and noticed the music mostly in how it drove the action forward and matched the game’s tone. This version—especially with the addition of Vent—has given me a new perspective and allowed me to appreciate individual songs musically in their own right, beyond just the battle themes. One reason is the instrumentation: some unexpected combinations and choices paired with hearing some of those softer and more mellow instruments really helped.

But geez, those battle and driving action themes. Iwadare definitely held up his promise to create a soundscape that pushes the player forward toward discovery and the unknown. Honestly, it’s difficult for me to think of many other game music tracks that inspire movement/progress as much as “Justin Hits the Scene,” “Aim for a New World,” or “Battle 1”/”Battle 2.” They’re fast and don’t let up because you can rest once the adventure is over… oh, and you’re also busy navigating ruins with an impossible isometric perspective. Like the many pitfalls that can happen when traveling to an unknown place, you might find yourself needing a break from the constant driving beats in the soundtrack every so often. I think this barrage of well-constructed energetic tracks wore me out and helped me appreciate the slight moderation, restraint, and variation in “Theme of Grandia.”

Yet, there are slower tracks and other moods present in the soundtrack, and I think this Complete Edition highlights them really well. The more orchestral versions of tracks like “Sandy Beaches of Gumbo” or “Luc” showcase the score’s range in a way that didn’t come across as much in-game. I also appreciate all the variations on the main theme that appear, especially the presence of that main melody slowed down in “Pavane.” To me, this represents how your adventure may take you through some slower moments like a courtly dance, or the gentle rhythm of daily life that you may get a glimpse of if you look hard enough at the artifacts and stories passed down as you’re searching through those ancient ruins.

Above all, I’m amazed at the convergence of teams necessary to put the album together and how the music and surrounding production fit together to enhance the soundtrack and give this music a new life years after the game’s release. As I’m writing this, articles are popping up about the “deleted years” of music from 2003-2012 because of rapid changes in purchasing and storing music. It reminds me how fragile our musical memory can be and how Wayô’s mission to preserve this music in a very tangible way. There’s an image in the liner notes of the Grandia team sitting down at the bar in the Seagull restaurant (owned by protagonist Justin’s mom in the game), and I like to imagine them joined by the Wayô team, fans of the original series, and everyone who discovered Grandia with the more recent remasters. Cheers to all of them! We’re lucky to have this music restored in such an excellent format when we need a little more grandeur and high adventure in our day. And for those truly committed to this music and series, you can have a music box straight from the Angelou civilization itself.