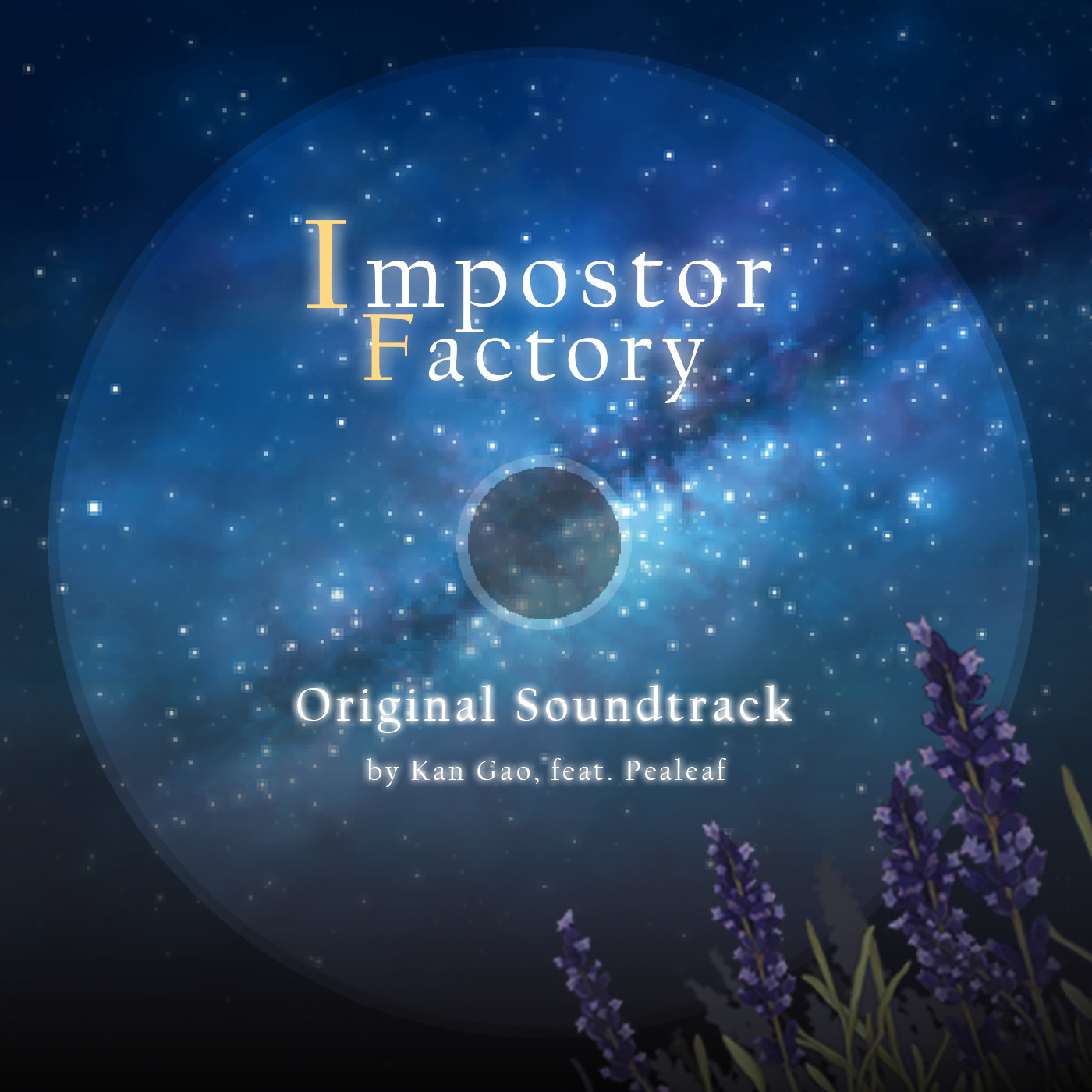 If you’ve stumbled upon this soundtrack review without prior knowledge of Kan Gao, his studio Freebird Games, or the previous games in this series (To the Moon, A Bird Story, Finding Paradise), put down whatever you’re playing and start on To the Moon. You’ll thank me later … and you’ll eventually work your way up to Impostor Factory.

For the rest of you, I suspect you already know how powerful Kan Gao’s work is. Perhaps you’re wondering if Impostor Factory‘s soundtrack stands up to previous entries in this esoteric series or if there are notable differences in the soundscapes. Maybe your opinion is already formed and you just want to get someone else’s perspective.

Whatever your reason for reading, I would like to say that I have my reasons for keeping this review short. For starters, I’ve rewritten it half a dozen times trying to speak to the quality of the music without spoiling the content of the game. I’ve also had to be careful not to simply repeat what I’ve said about Gao’s work in my previous soundtrack reviews (this particular struggle I had already noted in my review for the Finding Paradise OST).

So what, then? Does that mean the music for Impostor Factory is just more of the same? In some ways, yes. And that’s fine! The tonality and especially the instrumentation maintain the quality set by previous soundtracks in the series. You can expect piano to take center stage in most compositions, with plenty of solo and ensemble strings filling out the sound. You can expect solid use of motif, “variations on a theme,” and the like. You can also expect a gut-wrenching vocal track, though there is a significant difference there that we will address shortly.

I think, among the 60+ tracks that make up this nearly two-hour score, the most representative sample can be pulled from tracks 38 through 45. Here, Gao has a suite of powerful melodies that get altered in a variety of ways. The many versions of “Heartbeat” are not only perfect in the context of the game, but make for an incredible context-free listening experience. The same can be said of the conceptually linked “Decision For Two” and “Decision Of Two.” While Gao’s musical range can allow for humorous and quirky tunes like “Make Yourself at Manor” and “Double O Six Point Five,” the evocative power of the 38-45 segment is definitely the part of the OST I find myself returning to repeatedly.

Now then, let’s talk about vocals. Other entries in this series have an original vocal track written and performed by Laura Shigihara. To the Moon has the iconic song “Everything’s Alright,” and Finding Paradise has the tear-inducing “Wish My Life Away.” Before I write another word, I want to emphasize that I love Ms. Shigihara’s work as a composer, arranger, and vocalist; her work on these games and her seminal work on her own game Rakuen have brought life and light to many fans, myself included. I think that, even as outstanding as Kan Gao’s games are, their staying power wouldn’t be nearly as strong without the powerful vocal works alongside them.

Technically, the end-credits song for Impostor Factory is the non-lyrical vocal tune “Lullaby from a Star,” featuring the lesser-known vocalist Pealeaf. Pealeaf’s actual vocal number for this game, “Great Wide Unknown,” is included with the soundtrack as a bonus track, cited as unused in the game itself. And yet, it is hands-down my favorite track on the whole album. The lyrics beautifully match the game’s story and also cut to the core of some of the most common existential suffering we all experience. The breathy vocals with huge interval leaps feel absolutely angelic. And yes, this is a simple piano-and-vocals track from Pealeaf. If you compare the official recording to a live performance video released by Pealeaf, the only notable difference is that her self-recorded harmonies do not (and cannot, by definition) appear in the live version. She has this ballad down, solid. And frankly, so do I. I mean, I don’t sound good when I sing it, but I’ve listened to the song enough times and sung along enough times that I am sure I could perform it from memory. But then, would anyone actually want to hear a music critic sing karaoke?

To conclude: Kan Gao is still amazing; his music still hits all the right buttons. There’s a new vocalist on the scene, and she’s every bit as powerful and memorable as Shigihara. Get the soundtrack. You’re welcome.