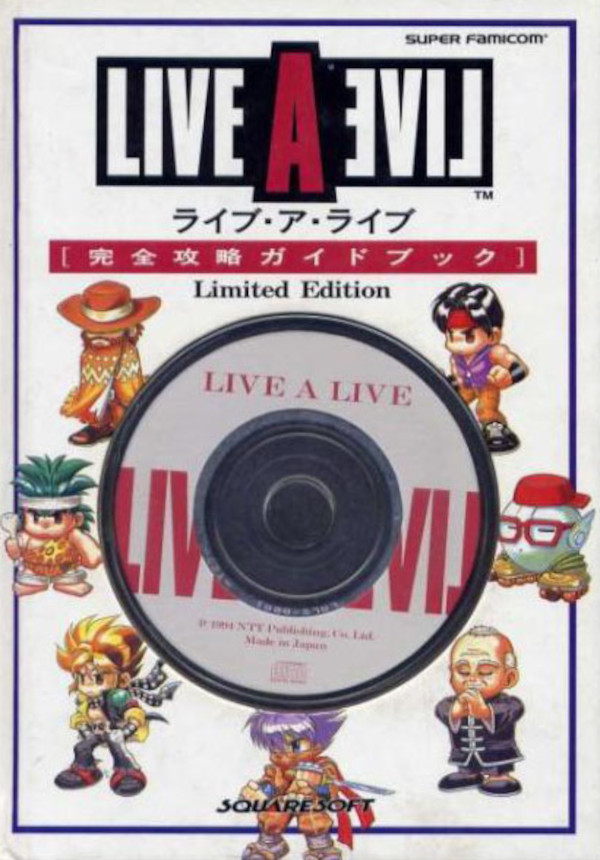 (Editor’s Note: Nearly 15 years after the release of this book+CD combo, the two unique tracks found on this disc were included in a reprint of the Live A Live Original Soundtrack).

It was a semi-common practice for NTT Publishing, in the early-to-mid 1990s, to throw together a little 8cm disc to come along with a game’s strategy guide for a “Limited Edition.” Off the top of my head, I can think of SaGa 2‘s strategy guide (including an 8cm of the game’s OSV) and Romancing SaGa 3 (containing OSV tracks of the character themes). Of course, those discs all contained music that, at one time or another, were found on their respective OSV releases. The only exception that I am aware of regarding this practice is the Live A Live Perfect Strategy Guide Book, which included two synth-arranged tracks by the composer.

Most people don’t know about this, and of those who do, no more than half of them care. But maybe you’re one of the few who actually care. If you are, this review was posted and written for you.

The first track is a battle medley, running at about six and a half minutes. Almost every single battle track made it in here. Listening through, I have counted eight themes (in this order): medieval/last-scenario battle, feudalist-Japan battle, prehistoric battle, far-future robot’s battle, country-western battle, Chinese Monk battle, an extended version of the modern-day wrestler’s battle music, which then leans hard into the boss battle music Megalomania. This leaves out the last boss music (Odio), some variations on battle themes (some scenarios had the same theme for normal and boss battle, others didn’t), and (strangely) the “cyber-punk” scenario battle music “Psycho.” As you can see, I’ve been doing my research… I said something in the OSV review about Live A Live being an obscure game that might not be worth the trouble of playing; however, after playing through the entire game myself, I discovered I was wrong. The game is great, and once you’ve played the game, this battle medley becomes all-too-memorable. The synth quality is great, the transitions from song to song are fun; the only problem in my eyes is the lack of music from the “near future” scenario, as I have already pointed out.

The second track is an extended version of the OSV track “Forgotten Wings,” which is a typical sadness/sorrow/death song for the game. The arrangement here isn’t anything to get too excited about, but it rounds out the disc well. The piano solo in the middle is probably the best part; I’ve always loved Shimomura’s solos. She balances control and chaos so well on her runs.

If you ever hope to own this CD, I would advise that you first learn Japanese so you can scour Yahoo! Japan auctions more adequately, and that you second save up a solid $100 or so just in case the bidding gets out of control. In my many years of searching Y!J, I have come upon two of these Limited Edition books, and they’ve sold for some outrageous prices. In my opinion, no 11 minutes of music is worth $100 for private use, and the publishers no longer gain any profit by you purchasing the original product. Editor’s Note: If you are seeking the music alone and care not for the artwork in the strategy guide, be sure to check out the aforementioned reprint of the OST!