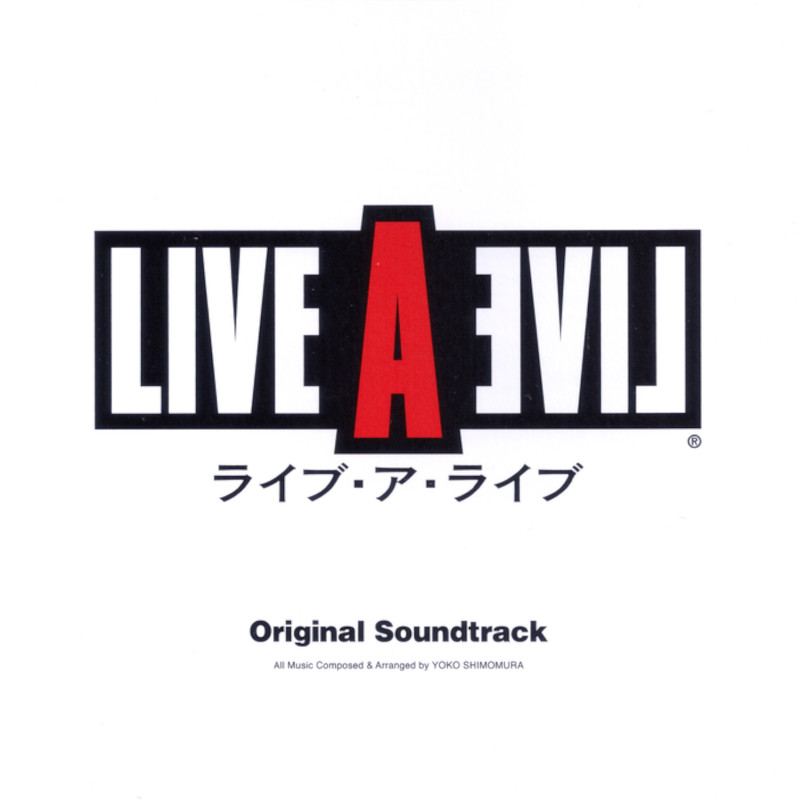 There’s been a lot of interest in LIVE A LIVE, at least among Square Enix’s current music (and music marketing) team. Almost all of the “SQ” arrange albums feature a track off of LIVE A LIVE, and there are two tracks from the game featured on the fantastic Shimomura orchestra album drammatica. One cannot help but wonder if a remake or port is on the horizon…

In any case, we’re all in luck, as the soundtrack for this Super Famicom cult classic has finally been reprinted (first print since 1994!). In keeping with current naming convention, and to differentiate it from the first print, Square Enix named this album an “Original Soundtrack” instead of “Original Sound Version.” The difference between the two albums? There are a few, some good and some bad.

On the plus side, Square Enix tacked on two bonus tracks. They were originally found on the super-rare strategy guide 8cm CD. These are great tracks, and I’m happy to have them. Of course, I would’ve also appreciated getting the vocal version of GO! GO! Buriki King!! that was released as a special bonus CD to Japanese eSTORE customers back in March. There would’ve been just enough room on the disc for it. Ah well, y’know what they say about staring at gift horses…

On the minus side, the packaging for this reprint is rather sparse compared to the original. The original had an 11-page booklet with great, detailed character art for each of the main characters in the game. The new booklet is just a foldout, but it does have a really nifty screenshot-based timeline / sequence of events for the seven characters (nothing for the big crazy ending, though!). For importers, this image will serve as another poignant reminder that Square Enix is crazy for not bringing this game to the US. Seriously, it’s that good.

One more thing new to the album’s packaging are these short, English liner notes from Yoko Shimomura, which read as follows:

Thanks Mom and Dad, my brother, friends, loved ones, and Chief, the whole “LIVE A LIVE” staff, and the “LIVE A LIVE Original Soundtrack” staff, too. Thanks for giving me a stage on which to perform, and for all the joys that have made me who I am. Thanks for the ocean, the mountain, the earth, the wind, the sky, the sun, music… …and you.

Why do I bother including this in the review? I think, because it’s important to note that 18 years later, Shimomura is still making incredible music. But at the time, this was her big break; it was her first project with Square. And the music here is nothing short of brilliant. There are so many great melodies, and they work so well with the 16-bit sound palette built by Minoru Akao (Square’s sound programmer during that entire era), one cannot help but get sucked in. I love this music, and Shimomura-san is right to thank those close to her who supported her before she was a “big name” in game music.

Now, seriously, with this reprint in existence, can we please get this game in the US somehow? Square Enix, are you (not) listening?! Just dig deep into one track (say, MEGALOMANIA or the end credits medley “Live for Live”) and you’ll immediately realize the people who love your SNES catalog (FFIV–VI, Chrono Trigger, Secret of Mana) will love this just as much!