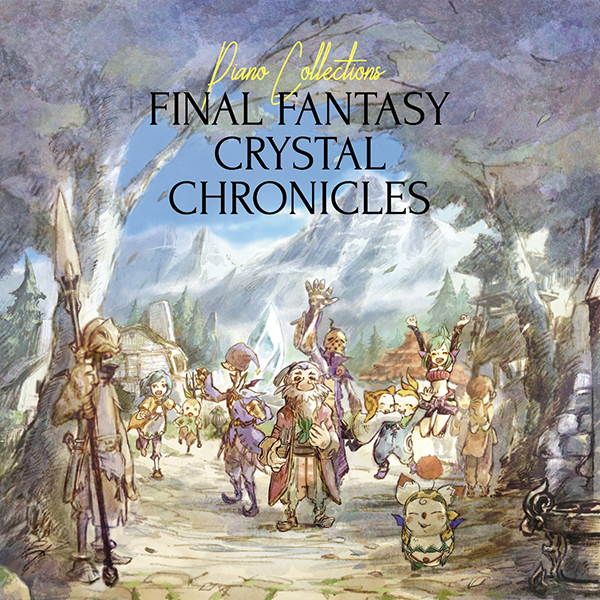 It is always exciting to see a solid piano arrangement come from Square Enix. We fans have come to expect a Piano Collections album for every main (numbered) entry in the Final Fantasy series, and we have also been surprised with piano arrange albums for Kingdom Hearts, NieR, and other franchises. Outside the numbered series, many fans had anticipated Final Fantasy Tactics would have a piano arrangement album next. Arranger and performer Casey Ormond did a fantastic job with Hitoshi Sakimoto’s Final Fantasy XII, and there had been talk of an FFT piano album to come shortly thereafter. At present, it would seem that such plans did not come to fruition.

However, after Square Enix announced plans for a Final Fantasy Crystal Chronicles Remastered Edition on Nintendo Switch, the publisher also announced Piano Collections Final Fantasy Crystal Chronicles, self-arranged and self-performed by the game’s prolific composer, Kumi Tanioka (with help from co-performer Yui Morishita on the duet arrangements). This was pleasant, unexpected news. It will not surprise long-time readers of RPGFan that I preordered the album as soon as it was listed.

My reasoning for doing so was not rooted in my love for the source material. Certainly, Final Fantasy Crystal Chronicles has a phenomenal soundtrack worth celebrating in its own right. But for me? The news that Tanioka was self-arranging and self-performing these piano arrangements got me interested. Back at its peak popularity, Final Fantasy XI had annual FanFests (“Vana’Fest” in Japan) on a smaller scale than Final Fantasy XIV today, but still something special. The musical event for FanFest ’08, which I had the pleasure of attending, was a five-piece mini-concert by none other than Kumi Tanioka. Not one, but two Piano Collections have been published for said game, and none of them feature Tanioka’s work. Not her arrangements, not her performances, nothing. Therefore, what I witnessed at that concert was something unique. More importantly, it went beyond “unique” to something absolutely astonishing. While the recorded FFXI piano albums are certainly enjoyable, I would argue that Tanioka’s arrangements were and are superior, even if they never see the light of day.

In Piano Collections Final Fantasy Crystal Chronicles‘ liner notes (thank you again for English liner notes, Square Enix!), Tanioka notes a significantly different approach between the solo tracks and the duets (four hands, à quatre mains). In terms of presentation and impression, I feel comfortable arguing that the duet tracks are the strongest aspect of this album. The four tracks (01, 05, 06, 08) co-arranged and co-performed by Tanioka and Morishita are the ones I gravitate to with each subsequent listen to this album. In particular, tracks 05 and 06, “Promised Grace” and “Monster Ronde,” are nearly perfect for four-hands arrangement. Once again, the liner notes are an insightful guide, as Tanioka discusses the struggle of taking a soundtrack with many unique instruments (including percussion) and distilling it to the piano. With a duet arrangement, the rhythmic elements of the percussion can come to life in ways that a single performer limited to two hands would be nearly unable to capture atop the melody and chord progression. Therefore, if you’re seeking that lovely, unique Final Fantasy Crystal Chronicles energy in this album, these tracks are the ones that really bring it to life.

That said, I don’t want to nay-say the solo tracks, for two reasons: one, Tanioka is quite capable of creating strong solo arrangements; two, there can be true beauty in simplicity. Fans of the game will almost certainly find themselves in a state of sublime awe as the more dulcet, beautiful melodies come through. This is especially so with arrangements like “The Village Where It Began” (02) and “Eternal Blue” (09).

Though there is a cost barrier to gain access to Piano Collections Final Fantasy Crystal Chronicles, I cannot help but look at this unexpected album as a gift. Its mere existence is a lovely addition to the piano VGM library, and its high quality makes the album all the more noteworthy. I offer sincere thanks to Tanioka, Morishita, and the Square Enix Music team for bringing this album to fruition.