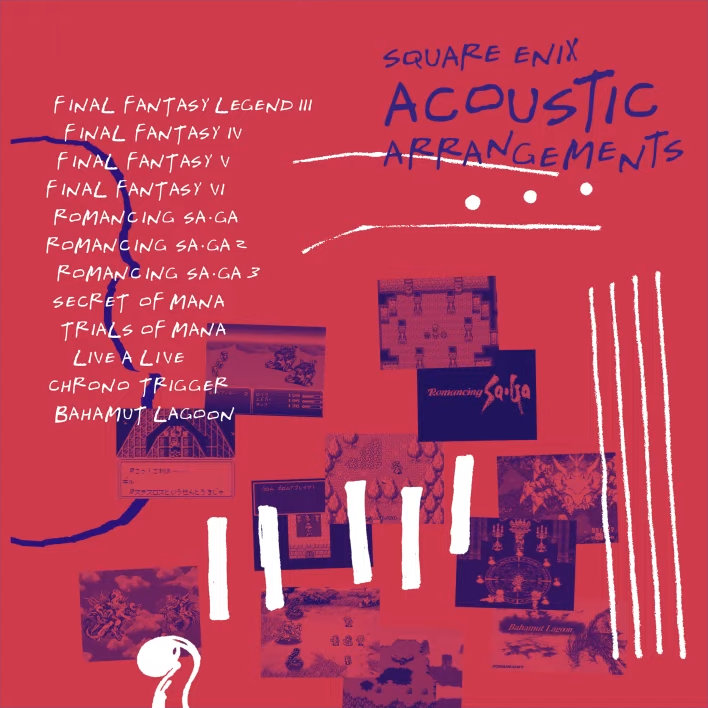 After a long run of hodge-podge arrange albums with the “SQ” moniker, Square Enix Music took some time away to regroup, rethinking their ideas for arrange albums. Over time, we have seen music released by genre, titled in a very generic and plain-stated way. Whether it’s for a specific game, a series, or the entire Square Enix catalog, we have seen recent albums with titles like Square Enix Jazz -Final Fantasy VII- and Chrono Cross Orchestral Arrangement.

It’s important to consider that there is plenty of room for variety within any given genre title, through subgenre, instrumentation, and more. But of all these genre-centered albums Square Enix has been producing, none is more elusive than “Acoustic.” What exactly is the implication here? As long as nothing is synthesized, anything goes? Wouldn’t much of the Jazz and Orchestra recordings also fit said category? Best as I can tell, the plan here was to put together small ensembles with a variety of familiar instruments, make no significant change to tempo or style of the source composition (as opposed to jazz, which allows for swing tempo, etc.), and make everything as bright and beautiful as possible with either dulcet or stark tones.

Square Enix Acoustic Arrangements is the first in a line of “Acoustic” albums from Square Enix, with others including Final Fantasy VII Remake and the SaGa Frontier Series. (Series? Isn’t it just two games in the larger SaGa franchise?) At first glance, there may not be much to celebrate. If you have an affinity for Square’s origins, you’re probably going to appreciate the source material listed on the front cover: an exclusive set of SNES / Super Famicom titles, with one exception (SaGa 3 / Final Fantasy Legend III for Game Boy). If that doesn’t excite you, you may have no reason to look further…

…except for a very important name. Atsuki Yoshida.

Yoshida first caught my attention in 2018 with his arrangements and performances on violin, viola, and clarinet for Octopath Traveler‘s arranged albums: the “Break & Boost” series, including stellar Break Boost Beyond concert on blu-ray. He manages his own string ensemble called Atsuki Yoshida EMO strings, and in this album, they bring new life to the boss battle music in Final Fantasy VI (track 2) and Chrono Trigger‘s “Battle With Magus” (track 5). For these two arrangements alone, the asking price of the digital album is worth it. Yoshida’s high-concept arrangements are impressive, as he weaves “Kefka’s Theme” into the FFVI arrangement and “Frog’s Theme” into the CT arrangement. The former is noticeable, while the latter appears in the form of a subtle counter-melody in the refrain that only those listening closely will hear. Bravo!

However, while Yoshida and his incredible EMO strings crew are amazing, the other ten tracks are not without Yoshida’s blessing. In fact, one has to wonder if Yoshida was one of the masterminds behind the Acoustic series. Across the 12 tracks on this album, Yoshida performs in some capacity (violin, viola, or clarinet) on every single one of them. If you’ve seen what Yoshida brings to the table via the aforementioned Octopath Traveler concert, his presence should further reassure the reader that there is something special here.

And yet, Yoshida isn’t even the true star of the show. That title belongs to relative newcomer Kenta Higashiohji. This talented multi-instrumentalist (flute, piano, guitar) arranged nearly half of the tracks on this album, including my personal favorite, Nuclear Fusion (from Seiken Densetsu 3/Trials of Mana). This arrangement pairs down the entire musical experience to four instruments: violin (Yoshida), acoustic guitar (Higashiohji), Cello (Kirin Uchida), and piano (Keita Egusa). The pace, the dynamic changes, the fierce intensity, and the face-melting improvisational solos put this recording up there with “A Settlement in the Red Bluffs.” This is saying something, as that particular arrangement from Octopath has quickly become one of my favorites from the last decade.

Not everything on Square Enix Acoustic Arrangements is fast and frenetic, of course. One would naturally expect some soft, soothing music as well. This album delivers and, in my opinion, the one soft piece to pack the biggest emotional punch is a surprising one. “The Dawn Warriors” from Final Fantasy V (track 6) is arranged so well I imagine that Uematsu himself would be shocked by it. Arranged by guitarist Kei Kato (his only arrangement credit on the album), this is a dense ensemble with a flamenco sound that defies expectation. It also appears to break the “Acoustic” rules, as the marimba part is either uncredited or a synthesized track laid out by Kato (and I suspect the latter). In any case, this piece is very impressive, and friends and colleagues cite it as their favorite. I can see why.

Not every arrangement is a winner, however. While the majority of the album stands up to scrutiny, even tracks with less-celebrated source material (Bahamut Lagoon, Final Fantasy Legend III), there are two that cause me to turn my nose up. They are Shingo Nishimura’s arrangement of WARM-A-LIVE (from LIVE A LIVE) and Kenta Higashiohji’s arrangement of Palom & Porom (from Final Fantasy IV). These two appear back-to-back as tracks 8 and 9 on the album, and they fail to impress me for completely opposing reasons. Nishimura’s “WARM-A-LIVE” is so bland, so vanilla, that all previously existing arrangements of this song appear to be superior by virtue of having existed first. Seriously, of all the songs from Yoko Shimomura’s underrated classic, why arrange one of the most over-arranged pieces? Fully disappointing. Contrast that with the quirky theme song for the magic-using twins from FFIV, and what we find is deviation from source material run amok. The first minute is palatable, sure, but it’s a train wreck by the end. Sure, it’s an intentional train wreck, and it’s all well-executed. But that doesn’t mean I have to enjoy train wrecks. Atonal nonsense is not what I came here for.

Put the rare disappointment aside, however, and what you have is a bold, wild, sometimes sweet experience. It is all quite the achievement, and it has had me so overwhelmed that it took me two years to write about it. Seriously, I preordered this album and listened to it at least once a month (sometimes daily, not monthly) since its October 2019 release. The additional time allowed me to compare this album to its follow-ups to better understand the concept Square Enix is going for. And I must say, not only do I like this album, I like the idea of the whole “Acoustic Arrangement” series. But wow… as a starting point, this collection of early-Square arrangements does stand tall against arranged albums from other publishers, as well as other arranged albums among Square Enix’s recent offerings.

What I’m trying to say is, unless you have an aversion to impressive wind/string ensemble arrangements, you really should look into this. If you love the golden era of FF, Mana, and SaGa, that’s all the more reason to get on board.