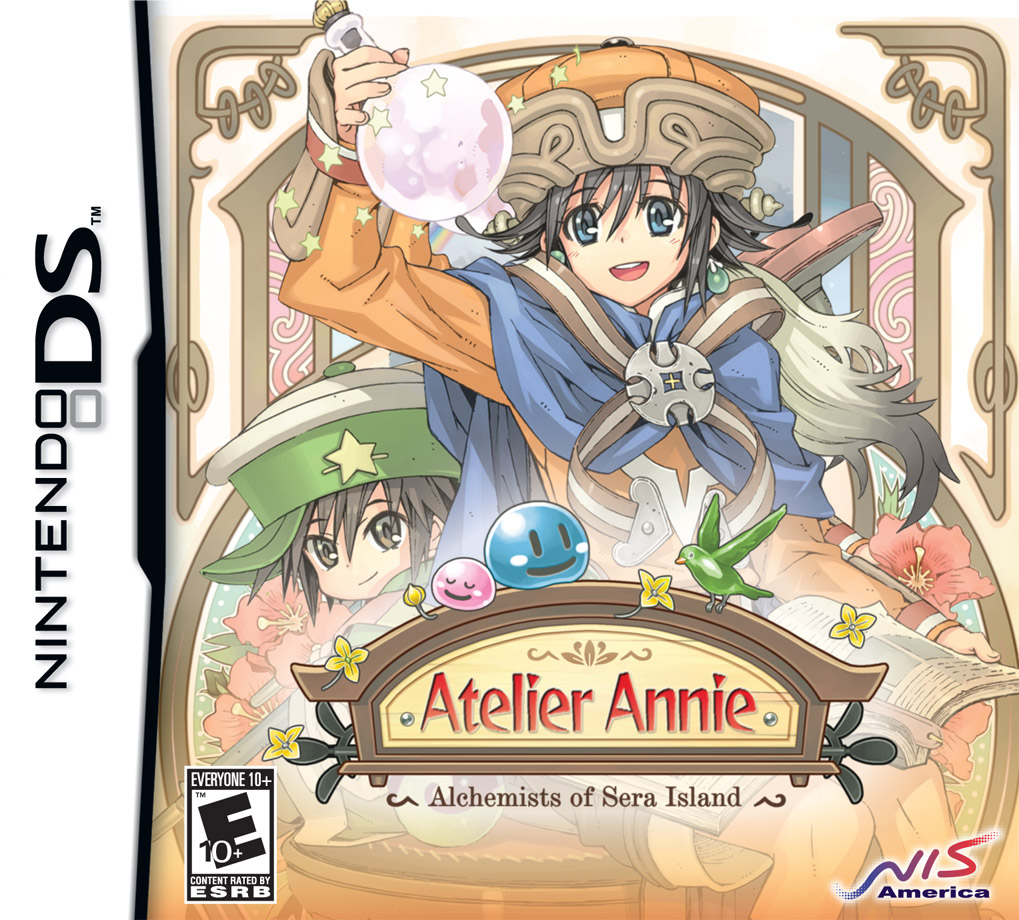 Ever since Atelier Iris: Eternal Mana was localized in 2005, Gust’s alchemy-themed RPGs have garnered a loyal following in the US. We’ve seen two Atelier Iris sequels, two Ar tonelico games, Mana Khemia, and there are more coming in the future. If there is one trait these games have in spades, it is charm, which is why import fans enjoyed the series well before Atelier Iris: Eternal Mana. DS owners can now join in on the alchemy action with Atelier Annie: Alchemists of Sera Island. Atelier Annie is like earlier Atelier titles such as Atelier Marie, in that it focuses less on battles and an epic, world-spanning plot, and more on character interactions, alchemy, world building, and facility management. If I had to sum up Atelier Annie in two words, those words would be charming and fun.

There seems to be a mini-trend with JRPGs featuring female protagonists that aren’t perfect little nice girls, but instead are more brash in a cartoonishly endearing way, like Angelica in the Rugrats and All Grown Up cartoons. Elise in My World My Way and Liddell in A Witch’s Tale are two such examples from recent JRPGs, and Annie follows in their footsteps. Annie is a lazy girl whose only ambitions in life are to sleep in, marry rich, and live a cushy life of leisure for the rest of her days. Her parents are not too happy about this, so they arrange to have her grandfather secretly take her to alchemist “boot camp” on Sera Island to teach her some responsibility. Sera Island was once a tourist hot spot, but it has become run down, and it’s up to the new crop of alchemy students to try and restore it to its former glory over the next three years. Annie obviously doesn’t care about any of this until she hears that the island restoration project doubles as an alchemy competition, where the winner gets a massive cash prize and the opportunity to marry the prince or princess. Ever the gold digger, Annie decides that she will win it all, marry into the royal family, and fulfill her dream of a cushy life of leisure. With her eyes on the prize, Annie leaps into alchemy with a newfound vigor, a feisty fairy tutor named Pepe, and her grandfather’s hand-me-down cape and silly hat.

Although the main storyline does not go beyond that initial premise, the character interactions are what make the narrative fun. Annie befriends a lot of people on Sera Island, many of whom are even more ditzy, bumbling, and airheaded than she is. Sadly, the mostly comical characters remain fairly one dimensional throughout the game, so Atelier fans expecting deep character backstories akin to that of Atelier Iris: Eternal Mana’s Veola will be disappointed. Still, shallow friends or not, Annie’s three-year stay will be filled with as much laughter as labor, and her progress over that three-year period will yield one of several endings, enhancing the game’s replay value.

Many JRPGs feature epic, world-spanning, dungeon crawling adventures filled with combat, with “world rebuilding” as a side activity where players may, for example, assist in rebuilding a fallen town through investing monetarily, gathering materials, or even playing mini-games to simulate the rebuilding process. Atelier Annie flips the script. This game’s emphasis is on world-rebuilding, facility management, character interactions, item synthesis, and occasional mini-games, with a side order of RPG trappings like combat and level-building. There are no dungeons, no locations larger than one or two screens, no epic adventuring, and a de-emphasis on battle, but you know what? I think it’s a wonderfully refreshing change from the RPG offerings I’ve been fed lately.

Players who found themselves spending hours upon hours synthesizing items and performing alchemy in Atelier Iris: Eternal Mana and only grudgingly returning to the main quest will be right at home in Atelier Annie. There is a lot to do in the game and only a limited time to do it. Basic gameplay involves gathering materials in monster-infested “gather points,” engaging in turn-based random battles against cute monsters, building levels to gain access to better gathering spots, synthesizing materials together to form items via an involved item creation system, and creating specific items for a myriad of purposes, the most important being the story-based assignments. Doing well on the assignments serves a dual purpose: it bring Annie closer to her ultimate goal and it yields special funds to rebuild Sera Island with cool places like parks, theaters, shops, and more.

Not only does Annie have to initiate the creation of those resort facilities, but she has to manage them as well. The more Annie visits those facilities, plays mini-games there, and takes on odd jobs from their caretakers, the more renowned and profitable they become, allowing Annie to sink more money into renovations. She can even ask her friends to act as clerks in her central shop that oversees the facilities, and it is a good idea to alternate between multiple clerks, since some facilities have more success with some clerks than with others, and there can only be one clerk in Annie’s shop at a time. Up to two of Annie’s friends can also join her battle party when she ventures into hostile territory, though a party member cannot simultaneously be a clerk.

Because the game has a time limit, every player will have slightly different versions of Sera Island. One player may choose to build as many facilities as possible, while another player may choose to only build a couple and improve those to the max. Players will have to pick and choose their “battles” wisely, because merely traveling from town to another location on Sera Island takes a day or two of in-game time. Even walking around the one-screen gathering points takes up a few in-game days. Time does not stop during item synthesis either, so if someone presents Annie with a task containing a deadline, players will need to keep travel and item synthesis time in mind or risk ruining her reputation. Luckily, time stops whenever Annie’s party is in battle, but a Game Over in battle knocks Annie out of commission for a day, so it’s prudent to stay alive in battle. In this game, the clock is a deadlier enemy than a dragon.

I know it sounds cliché, but time really does fly when you’re having fun with this game, because its core gameplay is quite addicting – sometimes even overwhelming – and players will have Annie running around all over Sera Island like a headless chicken. I completed a single playthrough in about a week, but it was pretty intense. In fact, my initial feeling upon completion was, “Whew! I need a breather before I play this game again.” To encourage additional playthroughs, Annie’s items (excluding story-related items, equipped items, and alchemy recipe books) carry over from the endgame save in a New Game Plus fashion. There is also an option to fast-forward cutscenes so that you can quickly get back to the action.

With so many tasks to accomplish and so many people, places, and items to manage, players will spend inordinate amounts of time scrolling through menus. Unfortunately, menu navigation is clunky, especially with the D-pad. Items are categorized, but some of the categorizations are downright odd, so the categorization sometimes hurts more than it helps. For example, a globe is listed under the “Medicine” tab instead of the “Other” tab, and because of the unintuitive location, I was unable to figure out how to make it prior to a client’s deadline.

Outside of the menus, collision detection when talking to townspeople or interacting with objects feels a little mushy, particularly when people and objects are close together. Control during battles is awkward as well. The DS’ top screen shows the battlefield, and thanks to the reverse isometric view, selecting targets with the D-pad is unintuitive. I would have liked that battlefield screen on the bottom so I could select targets with the stylus instead. The game is still fun to play, and players can get used to the quirks, but the interface felt clumsy to me.

Atelier Annie has colorful 2D visuals, and features super-deformed sprites with gigantic heads and pointy feet. The visual novel style cutscenes utilize highly expressive anime portraits, and are the game’s graphical highlight. Merely watching Pepe’s eyes go all swirly when frustrated made me chuckle every time. Complementing these unabashedly anime visuals is a whimsical soundtrack and Japanese voice acting during important cutscenes. There is no English voice acting in this game, which will thoroughly please dub-phobic purists. I thought the acting was solid, but some of the characters’ voices were too grating and squealy for my tastes.

Atelier Annie is a charming, fun, and surprisingly intense little RPG that focuses more on world building and resource management than traditional role-playing. I personally enjoyed it despite the interface foibles, but this is not a game for everyone. Gust fans should definitely check it out, and I also recommend it to players looking for something a little different than your average boilerplate JRPG.