Chrono Cross is any Chrono Trigger fanboy's dream come true- and it's also an unforgettable experience for the new gamer alike. 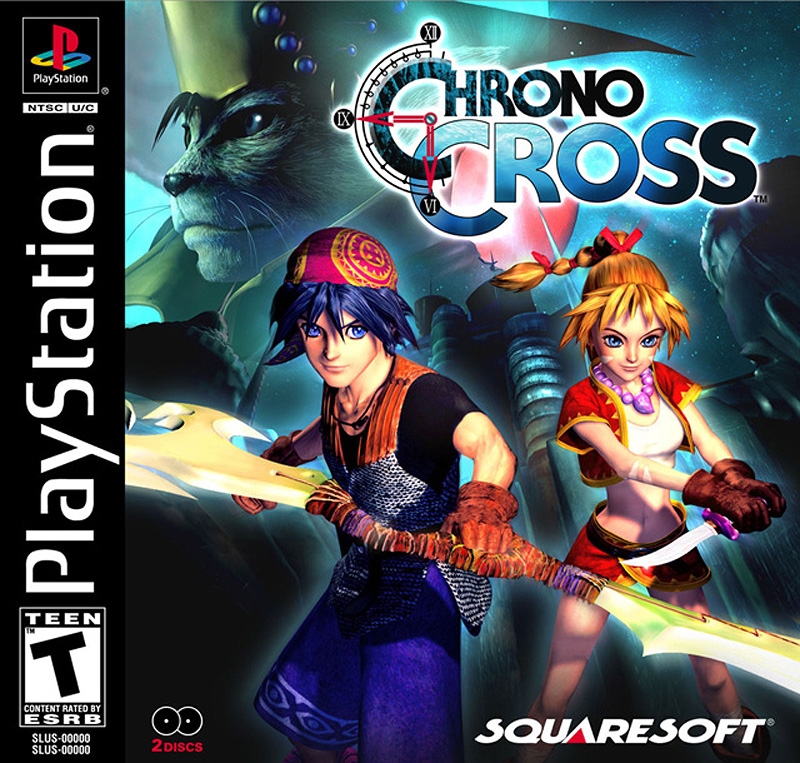 Chrono Trigger fans rejoiced at the sound of a sequel to one of the most beloved games of all-time. One question arose, though- how would it stack up to Chrono Trigger? Could anything Square produce match or even exceed it? Thankfully, the answer is yes, and Chrono Cross turns out to be as good if not better than its prequel.

The story of Chrono Cross begins in the small village of Arni, where Serge, our silent protagonist, is living out his normal teenage years- that is, until he’s sucked into a massive battle for the lives and fate of the people on the planet- which so happens to be the same planet that Chrono Trigger took place on. Serge and his friends gradually (and I mean gradually) discover what is really going on, and in the end, you’ll only be amazed. Chrono Cross’ plot begins quite simplistically, in the same vein as Chrono Trigger. Only late in the game are amazing discoveries made and the plot truly blossoms. In essence, Chrono Cross unveils 90% of the plot in the last 10% of the game- something that is very unbalanced and may turn off some gamers.

However, I found the game to be enthralling from the start, with questions such as “What does Lynx really want?” and “Why is the world split in two, and why does this matter so much?” floating around in my head. The final plot revelations are truly excellent and match those in games like Xenogears and Final Fantasy Tactics- and they do bring up serious philosophical issues that many gamers will enjoy pondering long after the game is over. Overall, I found the plot to be one of the best I’ve ever been privy to see- but I wish it was balanced more.

Square decided to take a new path with the characters in Chrono Cross. During the game, you’ll be able to accumulate a party of over forty characters. Yes, forty. This Suikoden-esque change from Chrono Trigger sounds odd at first, but in the end, it works well for the game. Due to the number of characters, not much development is given to the bunch of them as a whole, and is unfortunately limited to a select few, much like in the Suikoden series. The positive side is the different people you can choose from and pick to fight with, and the wacky and original character designs by Nobuteru Yuuki, who took over the helm from Chrono Trigger character artist Akira Toriyama.

What Square did to set Chrono Cross aside in the character department from the Suikoden series was add one of the best translations I’ve ever seen. Just about every character speaks in their own dialect or uses certain catch phrases, and this is the part that makes them unforgettable. From Harle’s sexy French accent, to the cute exaggeration of vowel and consonant sounds by our space friend Starky, the characters will put a smile on your face each time they speak. If you don’t care for the “Suikoden” approach and are looking for intricate character development only, look elsewhere, but you’ll be missing out on one of the most original and entertaining RPG casts ever put forth.

Yasunori Mitsuda returns to compose the Chrono Cross soundtrack and ultimately outdoes his previous masterpiece in Chrono Trigger to produce what I think is the best RPG soundtrack ever. Not only did he bring back some of the best riffs and melodies from Chrono Trigger, but his all-new compositions are easily on par with his work on Chrono Trigger and each piece accurately represents each moment of the game, from the magnificent orchestrated opening theme, “Time’s Scar”, to the subtle yet powerful credits theme, “Radical Dreamers”, which features the soothing voice of a Japanese woman singing. Many tracks stand out as excellent- one world map theme, “Time’s Grasslands” features the main Chrono Trigger theme played on an acoustic guitar with an excellent bass line backing it up.

Mitsuda’s excellent MIDI quality only enhances the soundtrack, adding the feel of realism to each piece. His choice of underlying bass lines reaching the 20-30Hz mark in many dungeon themes adds a boom of mystery to the pieces and his mix of high strings and quick, thunderous bass thumps in the boat theme of the Home World can almost make the gamer smell the salt of the sea. The only odd track, in my opinion, is the battle theme, which does not sound like a battle theme at all; the violin riff seem off-key for a battle song and the odd time makes for an unusual beat, but this can also be a welcome change from the usual xc2xbe and 4/4 time of many battle themes. I also wish Mitsuda would have not used so many higher bass chords, in the 80-100Hz range, as they can overpower the melody of the song in some instances and take away from the listening experience.

Mitsuda’s use of many great themes and instrumentation add to his catchy songs; some aren’t very complicated in their arrangement but they can be some of the best pieces- not one instrument feels “out of place”. Overall, this soundtrack is complete, diverse, and extremely enjoyable with many, many memorable tracks.

The sound effects are equally as great; each weapon has a different sound, and the clashing and slashing is clear in both right and left channels. The footsteps never get annoying like FF8’s and you’ll be given a sonic treat in areas like the dimension portals and the sound effects during cinematics. The only thing I found disappointing was the poor Dolby Pro-Logic surround mode, which was not separated well at all and muffled the magnificent soundtrack.

Chrono Cross features polygonal characters on pre-rendered backgrounds. Not my favorite combination (I prefer sprites/polygons) but the graphics are nonetheless breathtaking and some of the best the PlayStation will ever see. Beautiful cinematics done by the FF8 team show key scenes with amazing detail. The in-game graphics are just as good- the characters have a great amount of detail and in-battle they look gorgeous, with numerous animations (this goes for enemies as well). It’s easy to know when your allies or enemies are hurting, and the movements are seamless with near to no polygon breakup.

The sprite-based world map which looks very similar in style to Chrono Trigger’s is a very refreshing change of pace from the usual PlayStation RPG 3-D polygonal world maps. The menus are extremely clear and look like they are running in a very high resolution; the character portraits are a wonder to look at and the text is clear and bold. Playing this game in S-Video is an even bigger treat, with even clearer backgrounds and even deeper color. All in all, a visual treat.

Gameplay is similar to Chrono Trigger. Enemies can be seen on-screen first and can usually be avoided with ease; this is a relief from the usual, annoying random battle system. Once in battle, you can control up to three characters that each have seven points of stamina; the strength of an attack determines the accuracy and amount of stamina used.

The magic system is, in my opinion, the best system devised for a console RPG thus far. You can buy Elements, which allow the character to utilize their innate abilities to manipulate these Elements to cast magic, and use them only once per battle. This makes the gamer think out a strategy for boss battles. Also, you can allocate certain Elements to characters for full customization. The “level up” system is gone as well, and in its place is the “Growth” system. After battles your characters gain some HP and other additions to their status, and after major battles a large amount is added. You can also flee from any battle at any time. Excellent dungeon design also makes the game fun, with very few bland fetch quests.

As stated in the dissection of the characters, the dialogue in Chrono Cross is second to none- it’s full of life and very vibrant. The accents and dialects only add to the game’s atmosphere. There are few misspellings or grammatical mistakes (unintended ones, that is).

The game controls like a breeze and the Dual Shock usage is welcome, with the slow vibration of certain spells to the slamming of a body on the ground in a cinematic. The analog sensitivity is perfect and you’ll never get lost on-screen because you “blend in” with the background. The game is an average of thirty hours for the first quest, and with eleven endings and the return of New Game + from Chrono Trigger, you’ll be playing it for a long while after your first game.

Square has hit the jackpot once again and showed they still know what to do and how to do it. Chrono Cross is any Chrono Trigger fanboy’s dream come true- and it’s also an unforgettable experience for the new gamer alike. RPG’s like this don’t come around too often, and even with its flaws Chrono Cross ranks as one hell of a ride. All of the game’s elements meld together for a fun experience that won’t soon be forgotten by most.