Chrono Trigger is one of those rare titles that does indeed live up to its storied reputation... 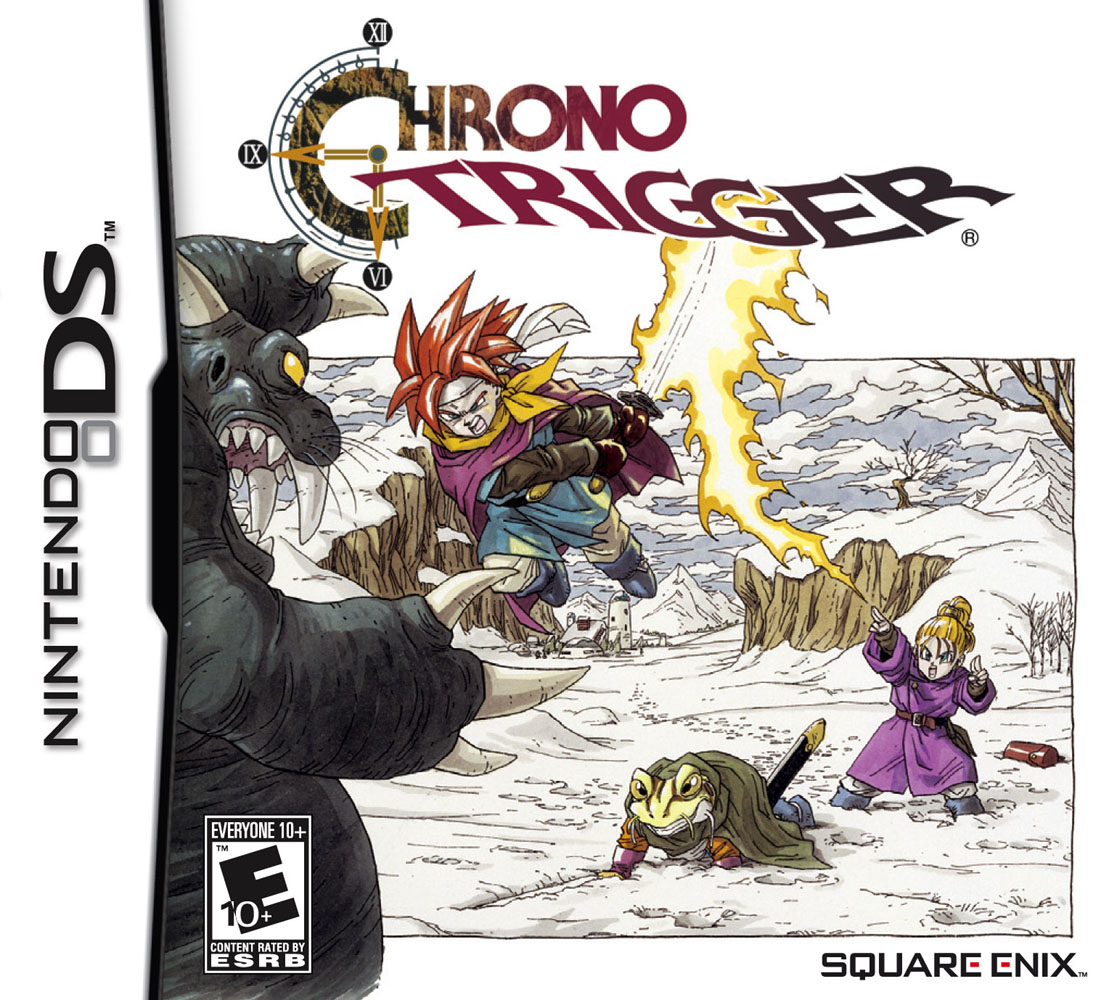 Sometimes things are so hyped up by other people before you get to experience them for yourself that there’s almost no way they can live up to those vaunted expectations, and this has certainly been my experience with some popular and beloved games over time. Sure, I might end up enjoying the games well enough whenever I’m finally able to play them on my own, but rarely do I feel that they measure up perfectly to the praise that had been heaped upon them beforehand by others.

That was my initial thought process when I picked up a copy of the DS enhanced port of the classic Chrono Trigger in a bargain bin at my local Best Buy several years ago. I had no doubt (due to the talk I’ve heard about the title online and from gamer friends) that I’d at least have fun with it, but Chrono Trigger quickly found its way onto my bloated backlog of games I meant to play eventually instead of jumping to the top of the list. Then I started writing reviews here at RPGFan and heard even more talk about how excellent Chrono Trigger is. The game comes up numerous times in features on this very site. Curiosity finally got the best of me, so I turned on my Nintendo 3DS to give it a try.

I expected to enjoy my time playing Chrono Trigger, but I never thought I’d fall so deeply under its spell. Having played Chrono Cross several years earlier and liking it quite a bit, I was unsure how I might feel about its prequel given the mixed views fans of Chrono Trigger tend to have towards Chrono Cross. Suffice it to say, it didn’t take long to see why the title is so readily beloved. Plus, certain additions to the DS version of the game even made me appreciate Chrono Cross more!

Chrono Trigger starts pleasantly enough, with our hero Crono being woken from slumber by his cheery mother.  There’s even a little cat that adorably follows him around his home! Crono heads to an event called the Millenial Fair to see what his inventor friend Lucca is up to—and runs into Marle on the way, who turns out to be a feisty princess in disguise. The trio gets roped into an adventure spanning timelines, joined by an equally colorful and memorable party. Frog is a heroic knight from the Middle Ages suffering from a terrible curse, Robo is a kind-hearted artificial warrior from a dreadful future, Ayla is a powerhouse cavewoman from prehistory, and Magus is a mysterious and taciturn individual with much larger connections to forces threatening the timelines than one might initially guess.

The party is quite well-rounded and has greatly established personalities, and I liked how small and manageable the size of the roster was compared to how large and unwieldy it could be in Chrono Cross.  Even the supporting cast has great additions, most notably the tragic princess Schala and Ayla’s timid boyfriend, Kino. I was also pleasantly surprised by the reveals and development shown by Marle’s father should you choose to partake in a certain side-quest later on in the game.

The characters of Chrono Trigger help bring to life a surprisingly detailed and robust story centered around time travel, something I’m almost always expecting to be a convoluted plot point instead of the easy-to-follow narrative here. The way events from the differing eras play out and impact other timelines is incredible to see develop and creatively implemented into story and gameplay progression. For instance, retrieving an object in one era will allow you to see future-era consequences that might be necessary to advance the game. It’s all quite cleverly done and fascinating to experience.

Since I was playing the game for the first time on the DS, I opted for the DS port options available for Chrono Trigger. This means that my playthrough involved the dual screen use from the DS version and all the added anime cutscenes. Players are given the option to play the game in a way that is more akin to the traditional SNES experience though, which I felt was a welcome addition to provide fans and newcomers alike differing ways to approach playing. I personally thought the use of both screens of the DS system was nicely implemented, with the action solely on the top screen and a map on the bottom during exploratory sections. The bottom screen is also where you can access your shortcut menu options, and the battle command menu appears there during fights.

Battles themselves are surprisingly enjoyable affairs in Chrono Trigger. Fights take place in active time after an enemy visible on screen takes notice of your party, adding a strategic layer to combat, as you have to make decisions in a timely fashion, hopefully before your foe has a chance to strike. Players can even adjust the battle speed at any time in the Settings menu. For certain particularly hectic fights, toggling the speed and wait time down to slower settings could sometimes help me get in much-needed healing compared to relying solely on default or faster settings. Several party members gain access to magic spells later on in the game, with notable exceptions like Ayla or Robo, though they are certainly more than capable of dishing out damage without them!

All characters have specialized movesets that they learn more of by participating in combat called Tech Skills. Grouping certain characters together in fights can even lead to special combination Techs with one another: ranging from effective Dual Techs with two characters to extremely devastating Triple Tech moves with the entire party. As I played the game, I found that certain learned Techs were vital to particular boss battle strategies, and it was a great incentive to experiment with different active party members to acquire them. My final battle party may have consisted of Crono, Magus, and Marle, but everyone was sufficiently leveled by the time I reached that point.

There is a wealth of content throughout Chrono Trigger beyond battles and dungeon exploration. Mini-games spread throughout the eras make for some memorable diversionary moments. One of my personal favorites was the racing game in the future timeline where you find Robo. Side quests are also plentiful, and I was impressed by how connected they were to the overreaching plot instead of feeling like pointless filler. Your approach to how you choose to play the game can have drastic repercussions too. For example, I made a mistake during a Lucca sub-plot event that altered the fate of a certain character and how that scene ultimately played out. Because Chrono Trigger focuses so much on time travel, you can also choose how and when you truly want the game to end, resulting in quite a few differing endings for players to see (while also increasing replayabilty). There’s even a “bad end” should you get a Game Over during the final boss fight.

From a design stance, Chrono Trigger is amazingly detailed and well thought out. Areas hardly ever overstay their welcome, and puzzles are challenging without being frustrating. I found that even when I may have struggled with finding a way to progress, once the solution became apparent, it was easy enough to implement.

Visually, Chrono Trigger’s graphics might be somewhat dated now, but they’re still impressively bright and vibrant-looking. I loved how colorful and expressive the character sprites were, and Akira Toriyama’s character designs are always a joy to see in games. Graphically, it all comes together in a visually charming and pleasing way that still shines overall, even by today’s standards.

The music score for Chrono Trigger is also phenomenal, with famed video game composers Yasunori Mitsuda and Nobuo Uematsu contributing to the soundtrack. Certain themes became stuck in my brain all day even if I played the game for under an hour or so, and I loved the sense of genuine feeling that so many of the songs conveyed. The various tracks for each era fit perfectly from a sound and tonal stance.

As far as weaknesses are concerned, I’m hard-pressed to really come up with many. Like I stated previously, some might feel that the sprite graphics are dated by current expectations, though I personally quite enjoyed them. There is the inherent difficulty found in old-school RPGs as well, but it is easily surmountable once you’ve an idea of what to do and are adequately leveled. The biggest issue I had with the DS port was more nit-picky since I felt that the anime cutscenes, while nice enough to look at, were a bit redundant and didn’t add much to the game, given that they tended to just repeat scenes you already saw earlier in sprite form. The one clear exception to this was the ending scene animation you see if you beat the game in a certain way, as I loved the closure it gave as well as the hinting of Chrono Cross. Beyond that, the default battle speed could be overwhelming at times but was easily manageable. Truthfully, there isn’t really much that Chrono Trigger does wrong!

With a team consisting of Hironobu Sakaguchi and Yuji Horii, of Final Fantasy and Dragon Quest fame respectively, perhaps it was no huge surprise that I’d end up enjoying Chrono Trigger. Given my appreciation and fondness for those series, I enjoyed what they created, even if it did take me a little longer to give the title a chance than most. It is obvious that a lot of care and effort was put forth by the entire accomplished development team, and that stemmed into quite a few fun hours of gameplay for me. Chrono Trigger is one of those rare titles that indeed lives up to its storied reputation, and I can certainly see why it is considered a timeless classic RPG. I can’t thank everyone who has recommended and hyped Chrono Trigger to me enough, as I found that it is a journey through time well worth taking for RPG enthusiasts!

Old school difficulty could be challenging for some gamers, most of the extra anime cutscenes don't really add much to the experience.

If you haven't given Chrono Trigger a try yet, the Nintendo DS port is certainly worth taking a look at!