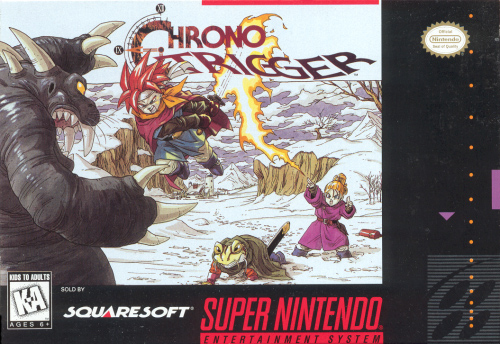 To this day, nearly 4 full years after its release, Chrono Trigger remains one of Square’s most popular releases. Its popularity is extremely well deserved; in my opinion, Chrono Trigger’s combination of beautiful visuals, one of the best soundtracks ever composed, and near-flawless gameplay make it Square’s finest moment to date.

It’s 1000 A.D. in the kingdom of Guardia, and to celebrate the passing of the first millennium and the arrival of a new one, a Millennial Fair is being held at Leene Square in Truce village. Crono, a teenage boy who lives in Truce, can hardly contain his excitement at the impending festival of fun. On the morning of the fair, after receiving his allowance from his mother, Crono heads over to Leene Square to participate in the celebration.

At the fair, Crono inadvertently bumps into a pretty blonde girl, who loses her pendant in the process. Being the good boy that he is, Crono immediately helps the girl look for her pendant. After the pendant is found, the two teens exchange introductions. The blonde girl’s name is Marle, and she and Crono decide to walk around the fair together. After taking in the many sights of the Millennial Fair, Crono and Marle make their way towards the northern end of Leene Square.

At the northern end of Leene Square, Crono’s best friend Lucca and her father Taban have just unveiled Lucca’s newest invention, the telepod. This contraption transmits matter from one pod to another. However, Crono’s bespectacled buddy also has a reputation for disastrous mishaps with her inventions, so no one wants to volunteer to try it. Crono, being the true friend that he is, volunteers. As he steps into the pod, Lucca flips the switch.

The experiment turns out to be a huge success, as Crono is transported to the receiving pod without a hitch. Even Taban is shocked at how smoothly the telepod worked. Marle, deciding that the telepod looks like fun, wants to try it, too. She steps into the sending pod, and the second demo is started.

As the power is turned on, however, Lucca’s telepod begins to have some sort of bizarre reaction with Marle’s pendant. All of a sudden, a strange gate opens, and Marle is sucked into it. After some discussion with Lucca, the gallant Crono reopens and enters the gate to try to bring Marle back.

Chrono Trigger contains one of the most riveting event-based plotlines that I’ve ever seen in a game. Crono’s epic quest spans many time periods, as the gate that is opened allows travel through time. As Crono and his friends travel through the different time periods, they set off a number of paradoxes, and must travel back and forth in time to correct these. The events that occur in the different time periods are interesting in their own right, but are tied together brilliantly with many exciting plot twists. One of the greatest feelings I have ever experienced playing a video game is the sudden realization of how a past event affected the future in Chrono Trigger.

Chrono Trigger’s storyline is also noteworthy because it contains something that doesn’t seem to exist anymore: a good translation from Square. Spelling and grammatical errors are avoided quite well in Chrono Trigger’s text. More importantly, the dialogue, while not spectacular, is solid, and, unlike US Square games of today, the dialogue flow is reasonably smooth.

As strong as the plot is in Chrono Trigger, it still contains a major flaw. Character development is almost nonexistent, and character interaction is minimal as well. This is a shame, because the characters seem to develop strong relationships with each other during the course of the game; unfortunately, players don’t really get to see how these relationships are developed.

Chrono Trigger’s gameplay uses mostly tried-and-true elements, but a few lesser-used elements also make their way into the play mechanics. For example, battles are turn-based, with the turns generated in real-time, but you can see your enemies before they attack. Therefore, most battles can be avoided.

Gameplay is arguably Chrono Trigger’s strongest individual facet. Although the gameplay isn’t quite as complex as that of many of today’s RPGs, its execution is almost flawless. The difficulty balance is near perfect; you never have build levels, but the game remains reasonably challenging. Gameplay-wise, each character in Chrono Trigger is very distinct, with his or her own strengths, weaknesses, and set of spells.

Because Chrono Trigger contains some action RPG elements, control is an important factor. Fortunately, Chrono Trigger excels in its control. In the area maps, your party moves responsively in 8 directions, and a dash button can speed your characters up as well. The menus in both the menu screen and the battles are very well organized, too; they’re among the best that I’ve ever seen.

Visually, Chrono Trigger holds up pretty well to RPGs of today. In the area maps, the 2D hand-drawn backgrounds are impressive in their level of detail. Although the maps aren’t as colorful as those of the top 2D RPGs of today, the colors used are visually pleasing. The sprites in the area maps are very well drawn, too, and hold up extremely well to those of today’s RPGs.

The battles take place on the same screen in which enemies are encountered. Therefore, there isn’t much to say about the battle visuals that hasn’t already been said about the area maps. The enemies do have the same level of detail as your characters, and the spell effects are impressive. The animation in both the battles and the area maps is reasonably fluid.

Chrono Trigger’s visuals are at their weakest on the small-scale world map. The landscape itself is drawn well and holds a high level of detail in spite of its miniscule size. However, the characters on the world map are completely unimpressive; they almost look like stick figures. They animate quite poorly, too. Fortunately, as mentioned before, the amount of time you spend on the world map in Chrono Trigger is minimal.

The character designs and art are also strengths of the game. Akira Toriyama (of Dragonball and Dragon Quest fame) is the artist responsible, and while I’m not normally a fan of his, I have to commend him for a job well done with Chrono Trigger. The characters in the game are all visually appealing, and their designs were quite original at the time of Chrono Trigger’s release.

If gameplay isn’t Chrono Trigger’s strongest department, then sound surely is. The sound effects are solid but unspectacular. However, the soundtrack is a masterpiece, ranking with that of Lunar: Eternal Blue as one of the top two scores to ever grace a traditional RPG. Yasunori Mitsuda’s crowning achievement is full of compellingly memorable moments. Although “Chrono Corridor” carries one of the strongest melodies I’ve ever heard, it exudes a creepiness that hints to the player that something is drastically wrong in the Magic Kingdom long before the plot reveals this. “Boss Battle 2” is perhaps the only battle theme I’ve ever heard that makes me feel like the fate of the world rides on my shoulders. And “Outskirts of Time”, the brilliant ending theme, is perhaps the most poignant piece I’ve ever heard in a video game.

Along with Lunar: Silver Star Story Complete and Lunar: Eternal Blue, Chrono Trigger ranks as one of the top three traditional RPGs ever released. If you haven’t played it yet, try to get your hands on a copy of it. This one gets my highest recommendation.